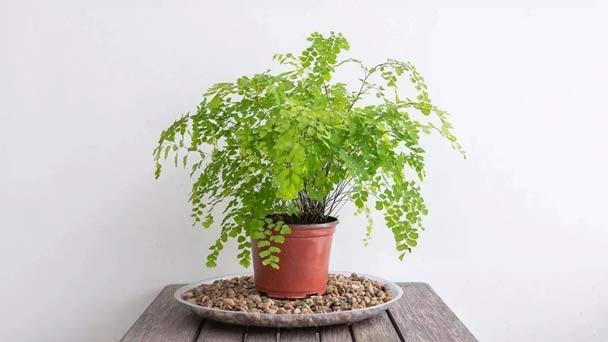 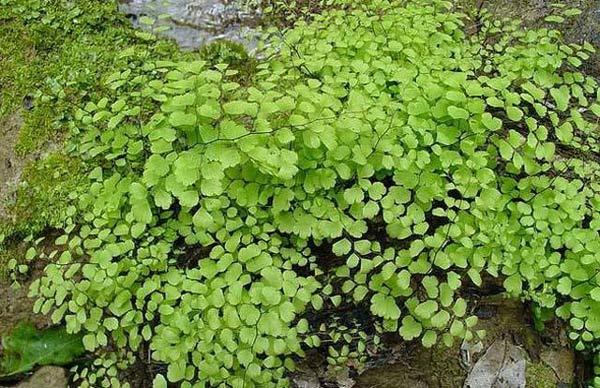 Maidenhair Fern History Maidenhair fern history is quite interesting. Its genus name translates to “non wetting” and refers to the fronds’ ability to shed rainwater without becoming wet. In addition, the plant is the source of an aromatic, volatile oil commonly used as a shampoo, which is where its common name of maidenhair derived. Another name for this plant is the five-fingered fern due largely in part to its finger-like fronds, which are supported on dark brown to black stems. These black stems were once used as a dye in addition to being employed for the weaving of baskets. Native Americans also used maidenhair ferns as poultices for wounds to stop bleeding.

Since there are over 200 species within the genus Adiantum, maidenhair ferns can be found in various areas. Habitats of Maidenhair can range greatly, from humus-rich woods to rocky waterfalls. Maidenhair's range is extensive, with species being found in North America and as far as Asia. All habitats are characterized by their high moisture levels, warm temperatures and medium to low sunlight. 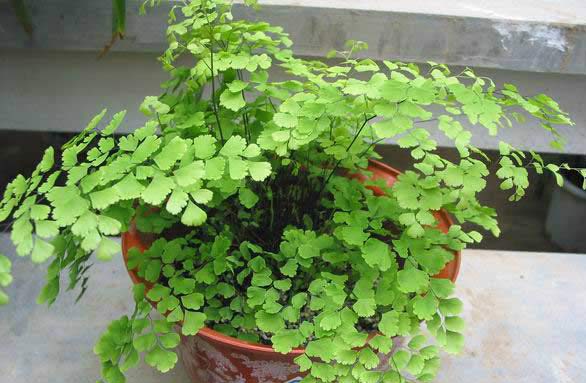 How to Grow and Care for Maidenhair Fern

How to Grow Maidenhair Fern

You will know your plant is ready to produce spores when you see the sori (little brown dots on the underside of the leaf tips.) Cut off a few fronds with the sori and place them between two pieces of paper and leave it in a protected space for a week. The spores will drop onto the paper where you can then spread them over the soil in a small pot. Cover the top of the pot with plastic wrap to create a mini greenhouse. Make sure this is not in direct sun as it may get too hot.
Keep the soil moist and after a few weeks you will begin to see the gametophytes emerging. This is just one step in the process to achieving a new plant. After fertilisation of the gametophyte, the sporophytes aka ferns will begin to emerge. Take an established plant and divide the root ball in half by gently ripping or cutting it. Don't worry if a few leaves die off once the division is complete. Place the new Maidenhair into pots and then continue so treat them as usual. A little seaweed extract added at this time can help the plants deal with any shock from being torn in half by you. Make sure the new pots you plant into aren't too large. Choose something bit bigger than the new root ball until the new plant is well adjusted to it's new life.

How to Care for Maidenhair Fern

Maidenhair ferns do best in bright indirect light, and are unable to tolerate much direct sunlight. Maidenhair ferns are unique in that they have the ability to grow in extremely poor and fragile soils, as long as there is a constant source of shade and moisture. Maidenhair need to be kept moist, but you must also be careful not to overwater or underwater them! Too much water leads to root rot, and not enough water can lead to the plant drying out. When it comes to maidenhair ferns and temperature, just keep in mind that Maidenhair like the same indoor temperatures that most humans do. As such, room temperatures of around 21 °C (70 °F) or more are preferred. You can provide humidity in any room with regular misting of the leaves. Maidenhair ferns need very little fertilizer and will grow steadily by just drawing nutrients from the soil. They are sensitive to the soluble salts found in most conventional fertilizers, so a light hand is needed when measuring and applying fertilizer. 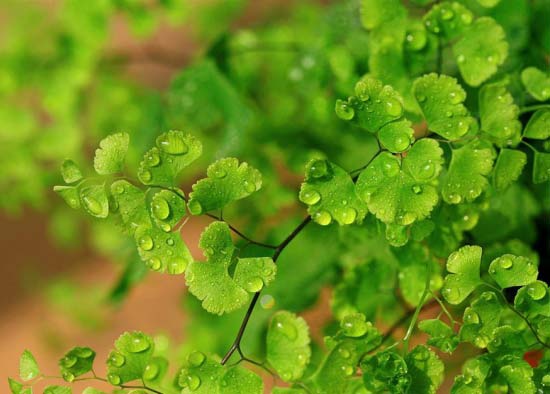 Indoors: Maidenhair ferns have a variety of uses indoors. They can be grown indoors in pots or hanging baskets in a brightly lit position out of draughts. They are also a feature of some terrariums. Different maidenhair foliage is also used as a filler foliage in flower arrangements.
Patios and ferneries: They are also a feature of shaded outdoor spots such as east or southerly facing patios or the traditional fernery, where they are also grown in pots or hanging baskets.
Outdoors: the native species, maidenhair, can be planted in shady rock crevices or used as an outdoor groundcover plant in a moist, shaded spot such as beside a pond.

Although neglect and drying out are the most common problems with maidenhair ferns they can also suffer from insect attack. Keep an eye out for the following pests: the maidenhair fern aphid, which causes the fronds to curl up and turn black. Hose off aphids, or spray with Confidor (spray plants outdoors in a well-ventilated spot).
scale (brown or black lumps on the stems or leaves) and or mealybugs (fluffy white insects which look like tiny pieces of cotton wool). To control lightly spray with Folimat, Confidor or PestOil (applied at half the recommended rate). Spray Maidenhair outdoors in a well-ventilated spot. Badly infested plants should be discarded. 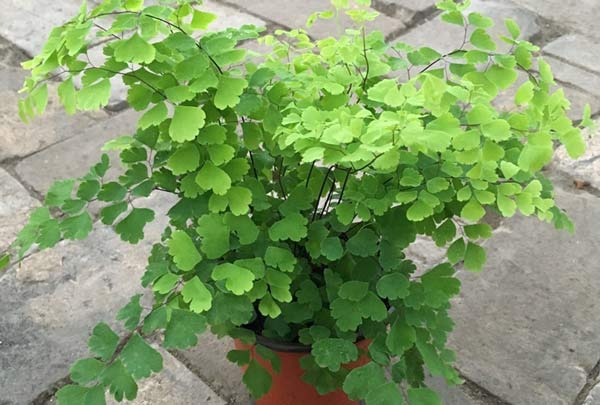