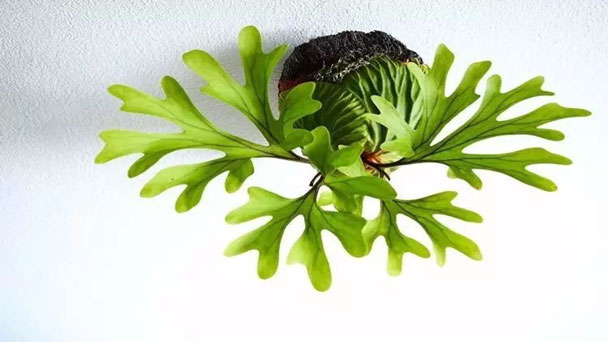 Where to Grow Platycerium Bifurcatum 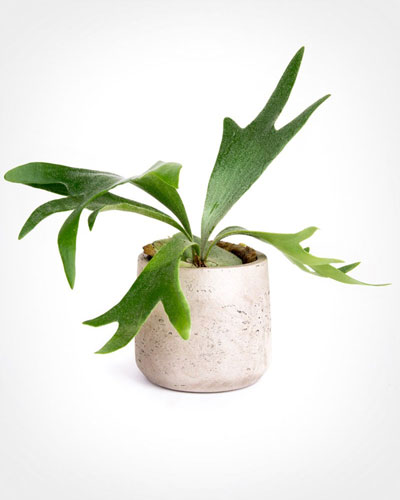 How to Propagate Platycerium Bifurcatum

There are a few ways to go about Platycerium Bifurcatum propagation. In nature, the plant often reproduces from spores. Growing Platycerium Bifurcatum from spores in the garden is possible, though many gardeners choose against it because it's so time-intensive. In the summer, look on the underside of the foliar fronds to find the spores. As the summer wears on, the spores should darken. When this happens, remove a frond or two and put them in a paper bag. When the fronds dry out, brush the spores off. Moisten a small container of peat moss and press the spores into the surface, making sure not to bury them. Cover the container with plastic and place it in a sunny window. Water it from the bottom to keep it moist. It may take 3 to 6 months for the spores to germinate. Within a year, you should have a small plant that can be transplanted to a mount.

A much less intensive method for propagating Platycerium Bifurcatum is staghorn fern division. This can be done by cutting a full plant in half with a serrated knife – as long as there are plenty of fronds and roots on both halves they should be fine. A less invasive form of Platycerium Bifurcatum division is the relocation of pups. Pups are little offshoots of the main plant that can be removed relatively easily and attached to a new mount. The method is basically the same to start a pup, division, or spore transplant on a new mount. Pick out a tree or piece of wood for your plant to grow on. This will be your mount. Soak a clump of sphagnum moss and set it on the mount, then set the fern on top of the moss so the basal fronds are touching the mount. Tie the fern in place with non-copper wire, and in time the fronds will grow over the wire and hold the fern in place.

When small plantlets, called pups, develop, it is possible to get cuttings from your Platycerium Bifurcatum.
Examine your Platycerium Bifurcatum for pups propagation. Pups are small plantlets that grow in mounds at the base of the fronds.
Cut a pup loose from the mother plant, using a sharp knife, once the pup mound reaches 4 inches across. In nature, pups disengage from the parent plant by themselves when they are large enough to grow on their own.
Plant your cutting with sphagnum moss wired to a piece of driftwood, cork bark, other wood or a hanging basket. Wrap the moist sphagnum moss around the young rhizome of the cutting and wire it to your chosen support system. 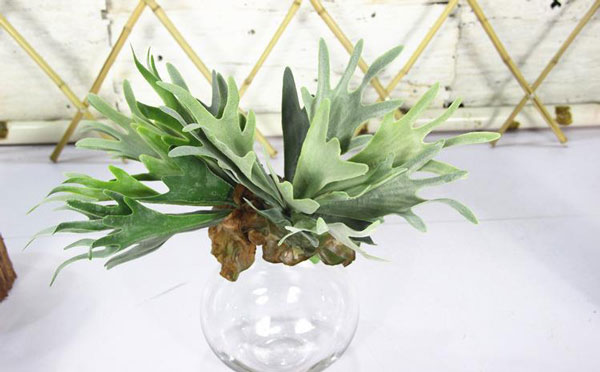 How to Grow & Care for Platycerium Bifurcatum

Filtered light is the best light condition when growing Platycerium Bifurcatum. Remember that in their natural habitat, they live under canopies of large trees so it’s no doubt that they receive only partial light. To mimic such a condition, you have to provide shade for your staghorn so that only 600–2000 foot candles are allowed to pass.
Staghorn will do well with a morning light so you can place it somewhere east. Avoid direct exposure to sunlight as this may lead to wilting and drying of the staghorn.

Though young ferns may be started in a moist traditional potting mixture, Platycerium Bifurcatum should be mounted once they progress towards maturity. Platycerium Bifurcatum is epiphytes, growing on the sides of trees or other plants in the wild, and will therefore thrive in similar conditions in your home. To mount, you'll need a starting lump of peat, compost, moss, or other organic matter to act as the base, but beyond that should not need additional soil.

Platycerium Bifurcatum has medium water requirements. You have to wait for the medium to dry first before watering again. Don’t be fooled when you see the outer medium-dry because most of the time, the inner portion is still moist.
To be sure, you can allow the staghorn to dry until it slightly wilts. From that, you can water the medium with ample water and the staghorn will go back to its normal condition. Beware of overwatering because it will surely lead to rotting of your staghorn.

If there's one thing to remember, it's that Platycerium Bifurcatum loves humidity. Though more mature staghorn can survive briefly freezing temperatures, they thrive in warm, humid conditions. platycerium bifurcatum care should be taken to maintain those conditions (at least above 50 degrees Fahrenheit, and below 100 degrees Fahrenheit), especially when they're young.
To increase the humidity around your Platycerium Bifurcatum plant, try placing it in one of the more naturally humid areas of your home, such as the bathroom or kitchen. If that doesn't work, increase the humidity around the plant by using a small-scale humidifier or spritzing the plant periodically.

As an epiphyte, your Platycerium Bifurcatum houseplant absorbs the moisture and nutrients from its environment through its fronds so regular feeding isn’t necessary. If desired, more mature Platycerium can be fed once every six weeks during the growing season into the root ball. If you want to try something unconventional, you can place a banana peel between the stag and the potting medium (or board if you have mounted it)… the potassium is good for them!

Platycerium Bifurcatum are relatively pest-free on their own but can be afflicted with spider mites if nearby houseplants come down with the pest. More frequently, you'll see black spot on a Platycerium Bifurcatum, directly related to too much humidity or traveling spores. To treat the fern, use neem oil or another natural fungicide. 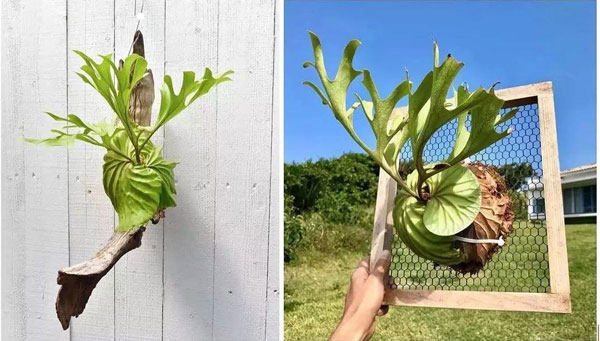 is probably the most popular Platycerium Bifurcatum for growing at home. It is also the most straightforward to care for and is a good choice for staghorn fern beginners. This species grows quite large, so make sure you have a strong enough mount and enough space to accommodate its eventual size. Unlike most staghorn fern varieties, this species can survive a brief drop in temperature to 30 ℉. (-1 ℃).

Platycerium Superbum is more difficult to care for and can be hard to find, but it has a striking appearance and is sought after by fern collectors. It produces large, light-green fronds that extend both upward and downward from the mount. These ferns need a high-humidity environment, but they are easily damaged by overwatering.

Platycerium veitchii is a silver-colored species from Australian semi-desert regions. It is relatively easy to grow and can tolerate temperatures as low as 30 ℉. (-℃). This species prefers high light levels. Platycerium hillii is another great fern for beginners. It has dark-green foliage and is native to Australia and New Guinea.

Platycerium angolense is a good choice for warm spots, since it prefers temperatures 80-90 ℉. (27 to 32 ℃) and does not tolerate temperatures below 60 ℉. (15 ℃). However, it is one of the more difficult kinds of Platycerium Bifurcatum to grow. It needs to be watered frequently and requires high humidity.

Is Platycerium Bifurcatum safe around pets?

Platycerium Bifurcatum is nontoxic to people and pets.

How to Mount Staghorn Ferns？

Mounting a Staghorn Fern is pretty straightforward, but it can be complicated to explain using words alone. We might create a DIY step-by-step photo instruction in time, but for now this YouTube video is a great demonstration of how you can do it.

Should I clean my Platycerium Bifurcatum?

All houseplant like having dust-free leaves because it's presence is a nuisance to indoor plants. Dust will block stomata (pores) in the leaves which can impact on growth, appearance and overall health.
If Platycerium Bifurcatum has grown outdoors, rain showers will wash and refresh the leaves. Not something that happens indoors though. But you can mimic this by putting your plant under a tepid shower for 30 seconds every so often.
Read Next:
Ming Fern (Asparagus Myriocladus) Profile: Care & Growing Guide
Java Fern Care & Growing Guide
Blue Star Fern Care: How to Grow & Care for Phlebodium Aureum
How to Grow & Care for Asparagus Fern
Maidenhair Fern (Adiantum Raddianum) Grow & Care Guide
Birds Nest Fern (Asplenium Nidus) Profile: Info, Care & Growing Guide
How to Grow and Care for Kimberly Queen Fern
Rabbit Foot Fern Care & Propagation Guide
Staghorn Fern (Platycerium Bifurcatum) Care & Growing Guide
Japanese Royal Fern (Osmunda Japonica) Profile

How to Grow and Care for Staghorn Fern

How to Grow and Care for Kimberly Queen Fern