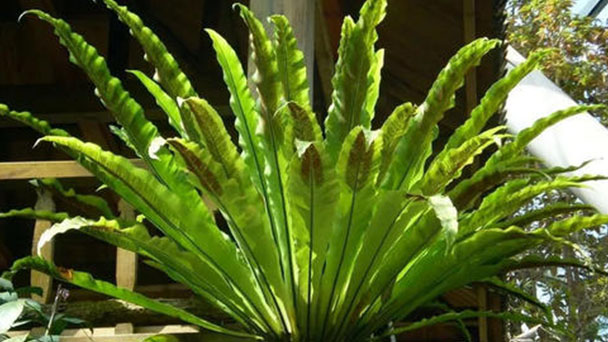 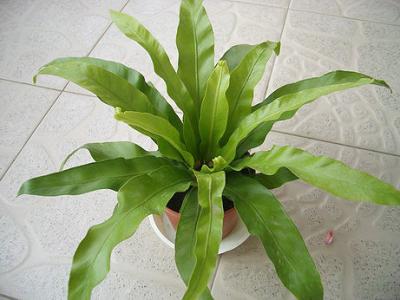 The main veins of Bird's-nest fern are raised on both sides, the upper and lower parts have broad longitudinal furrows, the surface is smooth and not wrinkled, dark brown, smooth; Both veins are slightly raised, obliquely spreading, bifurcated or simple, parallel, ca. 1 mm apart.Leaves leathery, brownish green or light brown after drying, glabrous on both surfaces.

Sporangia of Bird's-nest fern is linear, 3 -- 4 cm long, on the upper side of veinlets, extending outward from the base of the veinlets to a distance from the leaf edge, separated at wide intervals from each other, often sterile in the lower part of the leaf blade; Capsula is linear, light brown or grayish brown, thickly membranous, entire, persistent.

The Bird's nest fern is often found on the trunk or undergrowth rock of a rainforest or monsoon rain forest. The Bird's-nest fern receives large amounts of dead leaves, bird droppings and rainwater, which are converted into humus for their own food and provide habitat for other tropical epiphytes, such as orchids and other tropical epiphyte ferns.Its ecological habit is like high temperature humid, not resistant to strong light.

How to grow and care for bird's-nest fern

The optimum temperature for Bird's-nest fern growth is 16℃ to 27℃, 22℃ to 27℃ from spring to autumn, and 16℃ to 22℃ from autumn to spring of the following year. When the temperature exceeds 30℃ in summer, it is necessary to take cooling and humidifying measures such as shading by building a shed and spraying water to the Bird's- Nest Fern environment to create a relatively cool and humid environment so that it can continue to maintain vigorous growth. Whether it is family potted or productive cultivation, it is best to maintain a temperature above 15℃ in winter so that it can continue to grow. When conditions are not available, it should be maintained at least not less than 5℃ in the room temperature. If the temperature is too low, it is easy to cause the leaf margin to become brown, and it may even cause plant death due to cold damage.

Bird's- Nest Fern's native environment is a wet jungle, mostly ecological, only a small amount of scattered light can grow normally, so the pot plant can be kept indoors in a well-lit place all year round. Such as spring, autumn short-term in outdoor shade or greenhouse, it is more conducive to its growth, and can increase the luster of the foliage. Potted Bird's- Nest Fern, by all means avoid hot sun exposure, otherwise the Bird's-nest fern will appear bad and yellow leaf color, leaf burn, leaf edge scorch and other abnormal phenomena, reduce its ornamental value, summer should be used in shading more than 70% shade shed, more favorable for its growth.Winter in the shed, to give appropriate light, too dark to give artificial light supplement.

Potted Bird's- Nest Fern requires not only moist soil but also high relative air humidity. Water to fully growing season, especially in the summer, in addition to the cultivation matrix often should water the permeable, must also be elution foliage in 2 to 3 times a day, at the same time to the surrounding ground water humidification, maintain the local environment with high humidity of the air, as well as increase the luster of the foliage, very beneficial to the germination of spores leaves again. If the soil water or air dry, it easily causes dry curled edges. When the temperature is low in winter, it is better to keep the basin soil moist. You can spray water more and water less, so as not to cause Bird's-nest fern rot because of too much water in the basin soil under low temperature conditions. Because of its leathery leaves, which prevent the evaporation of water, it can also tolerate short periods of dry conditions, and because of this, it is better used for indoor display. When Bird's- Nest Fern is displayed indoors, young leaves should not be touched, and the foliage should be sprayed with water frequently.

Potted substrate can be foliage soil or peat soil, vermiculite, etc., and mixed with a small amount of river sand, can also be fern root, broken bark, moss or broken brick grains and a small amount of humus soil mixed and mixed. Conjacent place, had better make container with porous flowerpot or porous plastic basket, basin bottom pad enters the broken brick grain of 1/3, can join soil of fern root, bark piece, moss, rot leaf above, plant the root of Bird's-nest fern again next among them, such growth situation will be more vigorous. Potted Bird's-nest fern, can be changed once every 2 years, it will be removed from the pot, shake off the soil, cut off part of the residual roots and yellow leaves, peeled seed plant planted separately, the old plant to replace the cultivation substrate for a slightly larger pot planted. Additionally, an annual spring can add a little broken lime inside the basin, and be beneficial to the growth and development of its next child strain.

Bird's- Nest Fern's special shape and structure is conducive to its absorption of water and nutrients. Its rhizome is short and densely scaly, and produces a large group of spongy fibrous roots, and can absorb more water. The leaves radiate from the top of the rhizome and take the shape of a nest or a hollow funnel. In the native environment, they can collect fallen leaves, birds and rainwater in their nests. These substances can be converted into humus, which can be used as an important part of their own nutrient sources. Potted Bird's- Nest Fern, in its vigorous growth season, it is appropriate to apply a thin fertilizer of nitrogen, phosphorus and potassium balance every half a month, which can promote it to grow a lot of new leaves continuously. If the plant is short of fertilizer, the leaf margin will turn brown.If the temperature in summer is higher than 32°C and the temperature in the hut is lower than 15℃ in winter, all forms of top dressing should be stopped.

As an epiphytic plant, bird’s nest ferns are accustomed to growing with minimal potting media. So your plant generally won’t need repotting because its roots have run out of space. Instead, these ferns will need repotting once they’ve grown so large that they’re unstable in their pot and need a larger container to attach themselves to. This will typically occur every two to three years. When it's time to repot, select the next pot size up. Carefully loosen your plant from its previous pot, and set it in the new pot, filling around it with fresh potting mix.

In high temperature, high humidity, poor ventilation environment, leaf susceptible to anthrax, the disease spot is brown, the late wheel pattern is obvious. Prevention and control methods: at the beginning of the disease, 75% chlorothalonil WP 600 times liquid, or 70% methyl tobuzine WP 1000 times liquid, or 10% Shigao water dispersible granules 2500 times liquid uniform spray, once every 10 days, 3 to 4 times consecutively.In addition, attention should also be paid to prevent sunburn, cold damage and so on.

Control method: Clandan or carbofuran particles can be applied to the surface of the basin soil, and the insecticidal effect is better.In addition, we should prevent and control the negative locust and snails gnawing on the leaves in time. 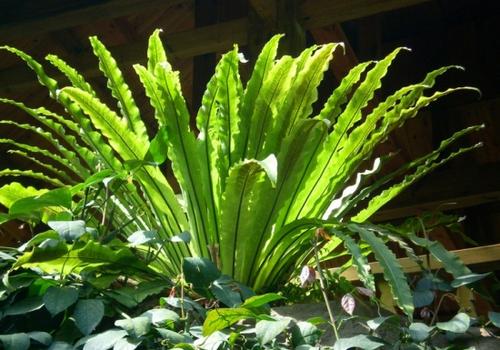 The Bird's-nest fern method of propagation

Bird's- Nest Fern can be propagated by spores seeding and ramets. Spore propagation has been widely used as a commercial mass production. The general can be propagated by division. When the Bird's-nest fern grows larger, it tends to have small branches. Before the new buds are born in late spring and early summer, the plants that need to be separated can be slowly cut off with a sharp knife, and then planted separately. Bird's-nest fern produces fewer branches, and the common method of seed separation is less used for plant division. Usually, the robust plants are cut into 2-4 pieces from the base part at the end of spring, and the leaves are shortened by 1/3 to 1/2, so that each piece has some leaves and rhizome, and then potted separately to become new plants. After potting, potting is placed in the temperature of 20 above half shade and higher air humidity for maintenance in order to make the wound healing as soon as possible. The substrate in the pot is slightly wet, not too wet, otherwise it will easily rot. When the new leaves grow, they gradually return to their original shape.

1.Spring sowing spore: fine sand and humus soil first, after high temperature sterilization, into the basin planish, sowing will mature spore evenly spread in the soil, the basin into the shallow water, and use of osmosis, make the soil full moisture, moisturizing, cover glass and put it in the warm shade, 7 days to 10 days spores can germinate, after a month or so, it will grow green prothallus, after 3 months stay when they grow a few true leaf, can on pot cultivation.

Generally in spring, select growth robust plants, leaf and root of along with of its rhizomes plexus cut into several pieces, or stripped off by small Bird's-nest fern, cut to 1/2 of the blade, the basin respectively, rotten leaves with a small amount of coverage, to create a moist for the ventilation and drainage good small environment, control the environmental temperature 25 ℃ or so, the survival rate is higher, need to pay attention to the soil not too wet, lest cause roots rotted. Splitting is the most effective method of reproduction for Flower lovers.

Productive mass propagation, can use the short terminal stem, young leaves or spores of Bird's-nest fern as explants, tissue culture rapid propagation, can breed a large number of uniform specifications of commercial seedlings in a short time.

There are only a handful of varieties of bird’s nest ferns, which typically feature different leaf shapes:

The distribution of bird's-nest fern

Under 2,500 meters in Green Island, Orchid Island and Taiwan. Taiwan is widely found in the island in the low altitude mountain forest, with the main, occasionally Yan Sheng, the number is very large.

Bird's- Nest Fern is rich in vitamin A, potassium, iron, calcium, dietary fiber and so on. Bird's-nest fern taste bitter, warm, into the kidney, liver and two channels. Bird's-nest fern has the function of strengthening muscles and bones, promoting blood circulation and removing blood stasis. It can also be used for bruising, fracture, blood stasis, headache, blood drench, impotence and gonorrhea.

Garden use of bird's-nest fern

Bird's- Nest Fern is an effective air freshener. Large and luxurant green leaves absorb carbon dioxide and release a large amount of oxygen through photosynthesis, so that the closed indoor air becomes fresh.

Bird's- Nest Fern is a large shade foliage plant, which hangs indoors and has a unique tropical flavor. Bird's-nest fern is planted under tropical Garden trees or on rockery rocks. The small potted plants are used to decorate the bright living room, meeting room, study and bedroom. 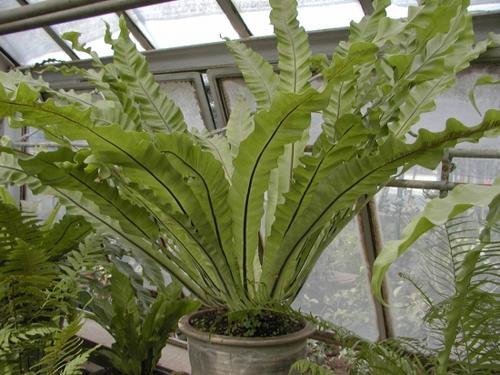