How to care for Paphiopedilum hirsutissimum 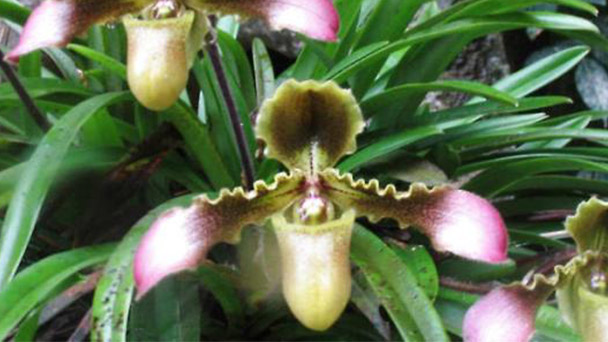 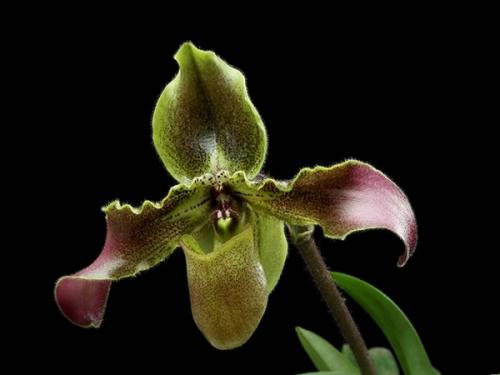 How to care for paphiopedilum hirsutissimum in spring

Paphiopedilum hirsutissimum is born originally in the environment with dim light, because this avoid by all means the direct sunlight, must shade 50 ~ 60%. If placed greenhouse cultivation, to use a shading network shading, in order to weaken the irradiation of sunlight. At the same time, the pots should be properly separated to facilitate ventilation. When placed indoors, also want to use the window to block a part of light. When moving from the indoor to the outdoor, do not immediately be exposed to the sun, so as not to make the orchid leaf burn. Outdoor cultivation should be chosen not to rain, and a well-ventilated place.

The hometown that paphiopedilum hirsutissimum grows is moist area, because this year all are fond of moisture. When water moss and plants show a slightly dry surface, it should be timely watering, in order to keep the pot moist. When watering, water should be poured from the bottom of the basin so far, in order to make the old water and air out of the basin. Watering place in addition to the root fully watering, but also to carry out foliar spray, more can promote the growth of new buds. Watering during plum rains depends on the degree of dryness of the surface of the plant and then appropriate water supply.

When new shoots begin to grow, n-P-K (composition ratio 6.5-6-19) diluted by 1000 times can be applied once a week. Read the instructions of the brand carefully before use, according to the concentration of its instructions, not too thin, should not be too thick. If you use a solid fertilizer made of oil and bone meal, you can fertilize once in 3 ~ 4 months, 4 ~ 5 inch pot, and place one grain. If the plant is a new water moss, or a plant that has been changed every two years, sometimes flowers will bloom without fertilization. However, if old water moss or plant material is used, the fertilizer applied will be heavier.

Rainy periods due to high temperature are more wet, the Paphiopedilum hirsutissimum in this period will suffer from soft rot. Therefore, special attention should be paid to ventilation, we might as well hang Paphiopedilum hirsutissimum in the place where the breeze blows. In the early stage of soft rot, brown, watery rot appears at the base of the orchid plant. The method of prevention is before entering the plum rain period, spray irrigation water and agent 800 times liquid, or free water and agent 1000 times liquid, twice a month.

The best time to change pots is at night when the temperature is above 12 to 13 degrees Celsius. It doesn't have to be done every year, and it should be done every two years. If you want to grow a big plant, just change a big pot. To reproduce, the plant must be divided. As the root of the slipper orchid is not much, and to be careful, do not break the root. When changing the pot, carefully remove the old plant material with chopsticks and remove the decaying roots. If the plant material used is water moss, you can fill in the bottom of the vegetarian pot with lillong pieces to facilitate drainage. If the use of pumice as a plant, because the pot is easy to dry, we might as well use ceramic pot planting.When using water moss as a plant, in addition to compacted to make it tight, oyster shells or limestone fragments can be added for better results. Place in the dark for half a month after changing pots, with less watering and regular foliar watering to promote new root growth. This period of time is overwatering, but delays the root, this point to pay special attention to. 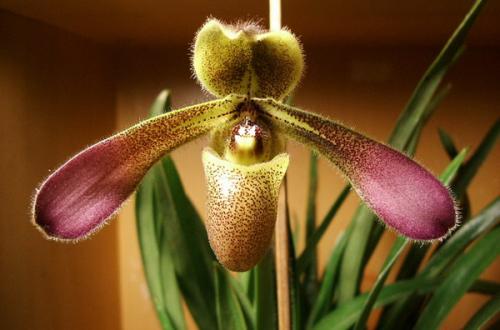 How to care for Paphiopedilum hirsutissimum in summer

The summer sunshine is very strong, especially after the plum rain, the temperature rises a lot, the shading rate should be enhanced to 60% ~ 70%. No matter greenhouse or indoor cultivation, we need to add a layer of shading network shading, so as to avoid leaf sunburn disease. When using a shading net, it should be far away from Paphiopedilum hirsutissimum as far as possible. If distance is near, not only hinder ventilation, condense heat instead, make Paphiopedilum hirsutissimum become weak. The growth of the slipper orchid without the spotted system requires brighter light than the spotted system, and therefore requires brighter light than the spotted system. Accordingly if it is without the slipper orchid that spot fastens the excessive shade of Paphiopedilum hirsutissimum leaf chairman too long and droops, wearing Flower at the same time is also not beautiful.

In summer Paphiopedilum hirsutissimum grows fast. If not watered every day will dry up, so the morning and evening should be fully watered. If the temperature exceeds 30 ° C during the day and 25 ° C at night, water the sides of the tallows and the floor to keep cool, in addition to fully watering the pot. In indoor cultivation, when air conditioning is open, it has no effect. But if the night is too hot, it is best to move to outdoor cultivation.

Summer is the growth season of slipper orchids, so fertilizer is indispensable. Liquid fertilizer 1000 times liquid once a week until the middle of September. In addition to the liquid fertilizer directly into the basin, you can also use a sprayer to spray the leaf surface. Solid fertilizer mixed with oil meal and bone meal shall be applied twice between May and July, and shall be discontinued in August. In the heat of heavy fertilizer, easy to cause root rot, and damage to langen.

Summer is the most prone to soft rot, slipper orchid mostly cultivated in the indoor. If the ventilation is poor, temperature rises, new shoots are easy to black and fall, resulting in the whole plant wilt. Its control method in addition to spraying fungicide, the place should be kept well-ventilated, once diseased, stop watering for 5-6 days, so that the orchid plant keeps dry. 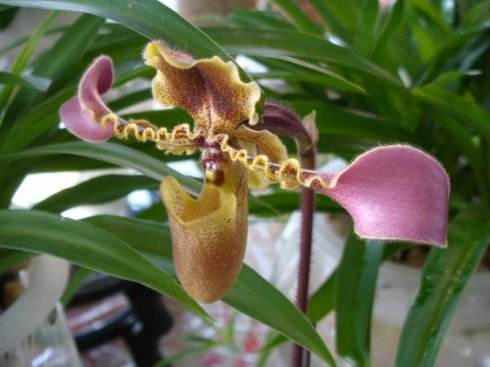 How to care for Paphiopedilum hirsutissimum in autumn

Autumn compared with summer, not only is the sunshine time shorter, the sunlight is also weaker. If we still use a two layer shading network, the original sunlight will be insufficient, so to remove one layer, maintain 50 ~ 60% shading. Western sun is easy to cause leaf burns, so still should avoid western sun. Ventilation should still be good, and windows around the greenhouse should be closed in late fall if nighttime temperatures are low.

As in summer, liquid fertilizer was applied 2 ~ 3 times per month, but fertilization was suspended for flowering plants.

At the end of the growth, the leaves that have grown for the first two years show a tan color that is about to wither. This is not morbidness, it is just aging, just carefully removed or cut from the rhizosphere.

When cultivated in urban areas, there is less of this problem. In suburban or pastoral cultivation, often as a result of weeds seeds flying around, germination everywhere, causing great trouble. So in late autumn, it is very difficult to uproot weeds once they have been allowed to grow. 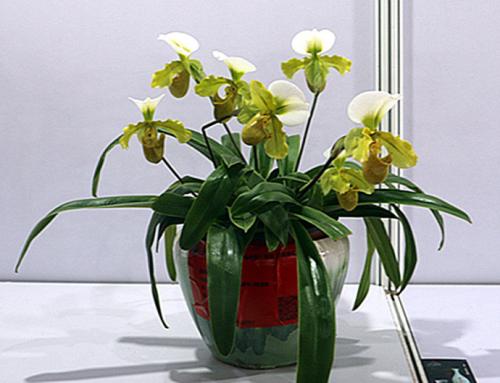 How to care for Paphiopedilum hirsutissimum in winter

Because many days of weak sunlight, sunshine time is short, so the original use of the shading network can be removed. But the newly built aluminum frame greenhouse, because of strong emission capacity, for the sake of safety, might as well still use a layer of shading net shading, keeping 30% shading. Because indoor sunshine time is very short, when placing indoor window edges, you also need no curtain shade, winter night temperature is lower. If below 13 ~ 15℃, we had better move the Paphiopedilum hirsutissimum indoors or greenhouse. Each plant has a different adaptation to the lowest temperature. The variegated leaf system was the most hardy, about 5 ~ 7℃, while the others were above 10℃. The optimum temperature for the variegated system was 10 ~ 13℃, and 15℃ for the rest. The temperature should not exceed 25℃ during the day and the air should be well ventilated.

If the air is dry for many days, you might as well put the bowl in the indoor air trough or in the Pauli farm box, which can keep the pot warm and prevent drying.

Because the flower bud grows gradually, the flower stem also needs to grow, accordingly the bibulous amount increases greatly. At this time, if the water is insufficient, for the growth of the flower stem is quite adverse, in a short period of time to stop the growth, so pay special attention not to let it too dry.

Watering in winter is best done before noon, when the surface of the plant is dry.

The Paphiopedilum hirsutissimum likes the environment with high humidity all the year round, usually the humidity should be maintained at about 60 ~ 80%; If the humidity is not enough, the growth of the slipper orchid has adverse effects, causing the weakness of the plant. When humidity is not enough, can water on the ground increase humidity. Or foliaceous surface is sprayed with water, but the amount of water is standard with the degree that the Paphiopedilum hirsutissimum does not collect water. If it is grown on a large scale, we have to resort to a humidifier.

No fertilization is required for flowering and budding plants.

During the growth of flower buds, if the air is too hot or too much fertilization, will make the flower stem unable to erect extension, and there are inverted, flowering down and other phenomena. In order to avoid this situation, you can erect a pillar while the flower stem is still in shape, and then tie a rope to fix it. The way of the pillar, it is to cut a length of 25 ~ 40 cm of iron wire, as shown in the figure will be one end of 3 ~ 4 cm, fold into a right Angle, and then half of the bend back, form U shape. 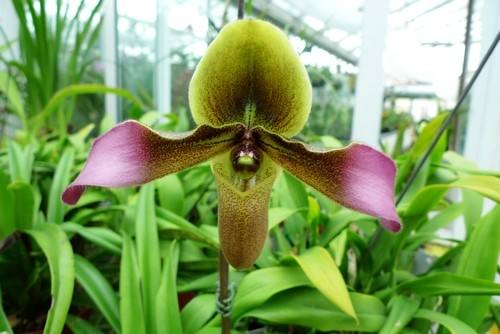