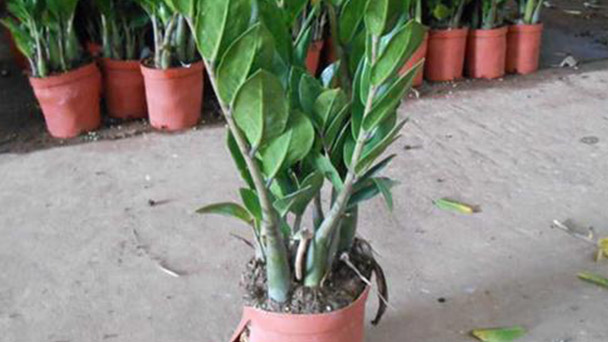 Zanzibar Gem (ZZ Plant), an evergreen perennial herb, and Zanzibar Gem is an extremely rare leaf-viewing plant with underground tubers. The above ground part has no main stem, indefinite bud germinates from tuber to form large compound leaf, lobules fleshy with short petiole, firm and thick green; The underground part is hypertrophic tuber. The pinnate compound leaves are extracted from the tuber tip, the axial surface of the leaves is strong, and the leaflets are opposite or subopposite on the axial surface. The flame bud is green, boat-shaped, shorter spikes of flesh.

The zanzibar gem is native to the rainless savanna climate of eastern Africa and was introduced to China in 1997. the zanzibar gem is an indoor leaf-viewing plant, which is used to purify indoor air. Its new pinnate compound leaf almost every time is 2, a long one short, a thick one fine, and symbolic meaning: make money, glory and riches and honor. 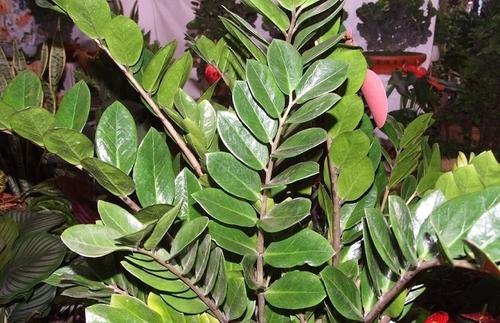 The Zanzibar Gem part above ground has no main stem, plant height is 50 to 80 cm, there are hyperplastic tubers underground, diameter is 5 to 8 cm.

From tuber germination, the indefinite buds formed large compound leaves, leaflets fleshy with short petioles, the hard part was hypertrophic tubers; The petiole base is enlarged, lignified; Pinnate compound leaves are drawn from tuber tip, 6 to 10 pairs of opposite or approximately opposite lobules on each leaf axis, ovate, thickly leathery, green, metallic. The flame bud is green, boat-shaped, shorter spikes of flesh.

Zanzibar Gem prefers a warm, slightly dry environment with half shade and small annual temperature change, suitable for growth at 20℃ to 32℃.

In the growing season watering should "do not do not water, water then water thoroughly". It is more drought-resistant, but fear of cold, avoid strong light exposure, afraid of heavy soil and basin soil water. If the basin soil permeability is poor it will easily lead to the tuber rot.

Soil is required to be loose and fertile, with good drainage, rich in organic matter and acidic to slightly acidic. Strong germination, after cutting off the large pinnate compound leaves, the tuber tip will quickly pump out new leaves.

The geographical distribution of Zanzibar Gem

The Zanzibar Gem is native to the rainless savannah climates of eastern Africa.It was introduced to China in 1997. 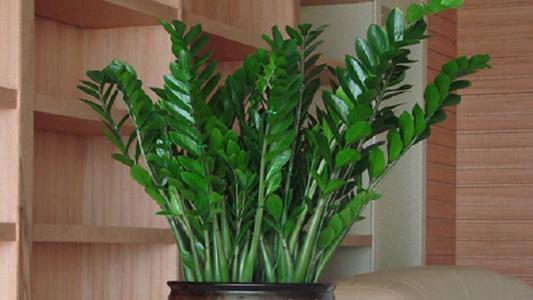 A single leaf cutting was inserted on the mixed substrate of river sand and vermiculite. After 10-14 days, a small bulb with root could be formed at the leaf base. After 2-3 months of cultivation, small plants could be grown, but the seedling rate was not high in general.

If use leaf axis or leaf shaft blade for cutting, matrix generally fine sand are available, and can also be used according to the ratio of 3:1:1 peat, perlite and river sand mixture matrix after mixing, the buried depth of cuttings for ear long 1/3-1/2, stay vane in the matrix, after spraying water into the shade, keep 25 ℃ - 27 ℃, environment temperature, based on the degree of the matrix of dry and wet to foliar spray 1-2 times a day, keep the matrix can be slightly in wet state, must not too wet, otherwise lead to stalk rot, cutting result in failure.

Remove the large Zanzibar Gem plant from the pot, shake off most of the soil, break it apart from the weak joint of tubers, and apply sulfur powder or plant ash on the wound, and then plant potted plants. Be careful not to bury too deep when planting, bury the top of the tuber 1.5-2cm under the soil. In addition, according to the characteristics of gold tree tubers with latent buds, a single large tuber can be cut into small pieces with 2-3 latent buds. After the wound gets dry, the tubers can be first buried and planted in the slightly wet sand. After the cut tubers grow into independent plants, the tubers can be potted.

Zanzibar Gem has a large tuber, which sprouts numerous buds and forms clusters of small tubers. Compound leaves have a life span of 2-3 years and are constantly renewed by new leaves. Usually, Zanzibar Gem depends on the small plants with small balls produced on the branches of the tuber, while the large plants can produce only 2-5 plants per year, with low propagation coefficient and slow speed.

Zanzibar Gem leaves are easily rooted in the substrate and can be used for reproduction. There are 15-25 lobules on each mature compound leaf, which can greatly increase the reproduction rate if used for reproduction. The different maturity of lobular or double-leaved with total petiole or single-leaved with total petiole was cut and inserted into clean river sand bed, or directly cuttaged in peat and other substrates. When cutting, the leaves are placed horizontally or vertically, and the sand bed is kept moist after cutting. After 50-60 days, the petiole or the base of the total petiole expanded, followed by a stout new root on the lateral side. 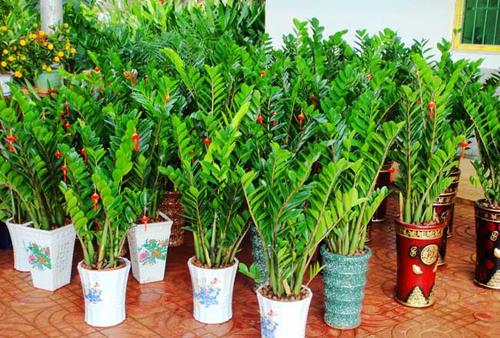 The even number pinnate compound leaves of the zanzibar gem plant are in a strong state at the base of the leaf axis, like an erect Buddha belly. The middle and upper parts of the leaf shaft are cylindrical, with irregular dark brown markings, as if covered with a layer of camouflage.Its compound leaf on elliptic or ovoid lobule, quality of a material is thick, leaf color is thick green, in the sunlight as if besmear a layer of glittering glaze color. If several plants are planted in a delicate pot of blue and white porcelain, there is a kind of vigorous vitality, verdant vitality, high ornamental value.

The Zanzibar Gem absorbs toxic gases through photosynthesis and releases oxygen, bringing in fresh air. When in the day, it can absorb the carbon dioxide of the room, give off oxygen at the same time, make the anion concentration in indoor air increase, and can absorb the dust that even a vacuum cleaner also is hard to suck. And more important is, it still can absorb the harmful gas such as formaldehyde, benzene series, and kill bacteria in the air. In this process effectively purify air, increase the green atmosphere in the space, let a person feel relaxed and happy. 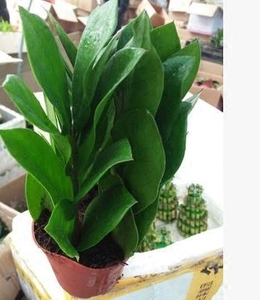 Zanzibar gem grows rapidly in spring and autumn, and has a relatively large demand for water. It is generally watered every 7 days. In summer, high temperature leads to rapid water loss, and watering should be more frequent. Watering should be done every 3-5 days. However, when the temperature exceeds 35 ℃, Zanzibar gem grows slowly and needs proper water control. If the temperature is lower than 10 ℃ in winter, watering can be stopped. If the soil is dry, less watering can be done.

No matter what plants we raise, as long as we adhere to the principle of air permeability and water permeability, it will not rot roots. If we go to the fertilizer and water later, it will grow very well. Zanzibar gem is also very simple to mix soil. We can find some river sand. The river sand has a particle of about 3 ~ 6mm. This is very good. We can also buy Maifan stone, For particles such as rainbow stone and volcanic rock, half of them are particles and half of them are nutritious media. For nutritious media, we can use rotten leaf soil or peat soil. In this way, after proportioning, the air permeability and water permeability are very good, and it also contains nutrients. Zanzibar gem definitely grows well, and the root system under it will not rot.

Zanzibar gem is native to tropical Africa. It likes a warm, humid and sunny growth environment, but it is also highly resistant to negative. There is almost no need to worry about the light during maintenance, as long as you don't expose to strong light, and shade in time in summer.

We should keep the basin soil moist and dry during the growth period of Zanzibar Gem. Foliage spray is often used in summer. Stop watering Zanzibar gem in winter. The weather is dry in winter. We should often spray water close to the room temperature on the leaf surface and the surrounding environment to keep the relative air humidity above 50%.

The money tree grows fast and grows many new branches. For beauty, we should carry out Zanzibar gem pruning. We can make a sketch in advance, and then repair the money tree into a natural form according to the whole, and trim the branches into a cloud shape, such as the epitome of trees in nature. In addition, you can also cut it into branches with slightly higher middle, different sizes and outer contour like melon seed shape, which will look very good.
Pruning is the most important part of Zanzibar gem pruning method. All clustered branches, Cross branches, inward branches, overlapping branches, parallel branches and bare branches should be cut off. It should be noted that in some special cases, you can choose to leave one or two branches as the need to improve the modeling.
In Zanzibar gem pruning method, bud picking is very important, which can avoid consuming nutrients. We should remove the irregular new buds at the base of the trunk and trunk of Zanzibar gem, and pay attention to the protection of strong buds at individual missing branches.

If the Zanzibar gem we potted in the family is properly maintained, it will grow very fast, and the root system will completely grow all over the basin in the later stage. If the root system grows all over the basin, we should give it Zanzibar gem repotting regularly and deal with it reasonably. So how can we give it Zanzibar gem repotting?
Zanzibar gem's roots are very thick and basically have no capillary roots, so the simple and violent way to change the basin is to take out its soil. We can flush out all the soil of Zanzibar gem. If we flush the roots, we won't hurt its roots at all, because its roots are very thick. Then we slowly straighten out its roots, and choose to reserve 2 ~ 3 clusters at the connection position of each plant to cut it off.
After Zanzibar gem repotting, we should add rooting solution and carbendazim. The rooting solution can make it grow roots quickly. Carbendazim can prevent fungi in the soil from causing wound infection and decay. After planting, put it in a well ventilated place, see a little scattered light, and maintain it normally. The wound of Zanzibar gem will heal slowly, and the root system will grow rapidly and gradually adapt to our new basin soil.
Read Next:

How to propagate Zanzibar Gem

How to Care for Zanzibar Gem