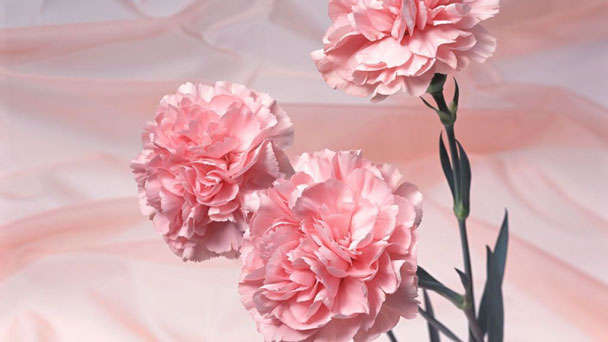 Carnation (Dianthus Caryophyllus) produces fragrant, loose tufts of flowers that are sure to attract the attention of the nose and eyes. Varieties developed from this species provide gardeners with a variety of height and branching habits to suit a variety of horticultural needs and Spaces; From large cut gardens to lush flowerpots on the terrace.
Carnation PictureCarnation InfoHistory of CarnationsCarnation DistributionHow to Grow and Care for CarnationHow to Grow CarnationHow to Care for CarnationCarnation UsesTraditional usesVarieties of CarnationCarnation Common Pests/DiseasesCarnation Design TipsCarnation Companion Plants 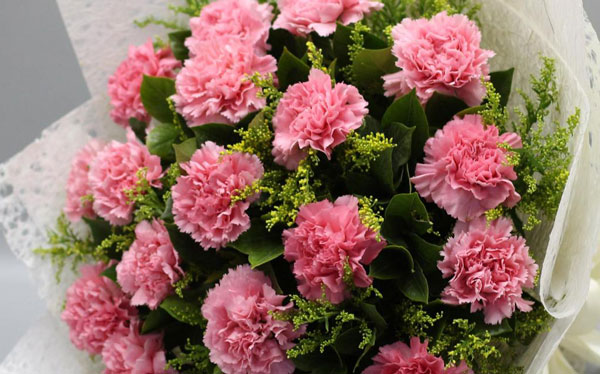 Carnations are part of genus dianthus, which comprises more than 300 species of flowers. Images and descriptions of dianthus flowers have appeared in recorded works for thousands of years, since botanist Theophrastus named the group by combining the words for divine ("dia") and flower ("antho") in ancient Greece. Dianthus flowers, which also include Sweet William, Maiden Pink, China Pink, and Garden Pink, are recognized for their pointed, zig-zag shape of their petals; the petals look like they've been trimmed with pinking shears, which may have inspired the group's common name, "pinks."
The iconic carnation blooms are Dianthus caryophyllus, also known as clove pinks. They're the birth flower associated with January, and a bloom famously tied to Mother's Day since the holiday's founder, Anna Jarvis, handed out carnations in honor of her own mother. (According to ProFlowers, "A red carnation today signifies respect of a living mother, while a white carnation is worn or given in honor of a mother who has died.") The flowers are widely grown in shades of pink, red, white, and yellow, and give off a strong scent. 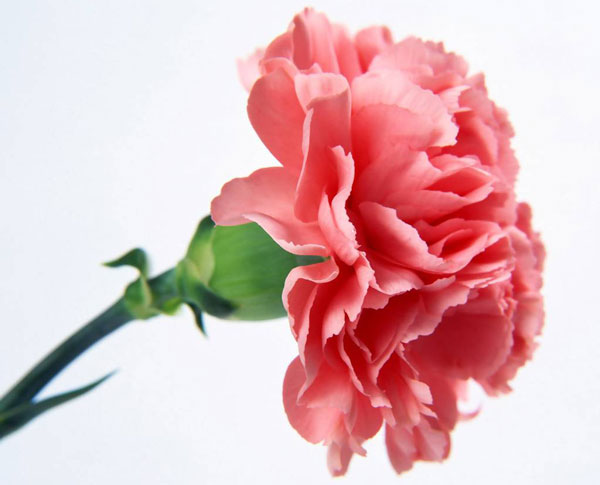 The wild carnation is found in the Mediterranean countries of Croatia, Albania, Greece, Italy (including Sicily and Sardinia), and Spain.

How to Grow and Care for Carnation

How to Grow Carnation

Dianthus can be propagated from seeds started indoors, directly sown into the garden, or grown from stem cuttings. To plant from seed, begin indoors 2-8 weeks prior to the last frost for your area. Plant in a light, loamy soil mix, sprinkling seeds over the top, and then covering with a light layer of soil. Cover the container with a cloche or plastic bag to keep the soil moist and warm. Once seedlings have 2-3 true leaves, move into their own pots. Transplant outdoors once they’re 4-5 inches high. To start from stem cuttings, cut away several non-flowering stems from the parent plant just below a leaf joint. Trim away the lower leaves, leaving 4-5 sets of leaves at the top of the stem. Dip the base into hormone rooting powder, and pot up around the perimeter of a container filled with a light potting soil. Water, then place in a plastic bag, securing the top with a twist tie. Set in a sheltered spot in the garden that receives morning sunlight, but out of hot afternoon sun. Stem cuttings should root in about 4-5 weeks. Remove the soil ball and gently separate the cuttings, then pot up into individual containers. Division is the ideal way of propagation when a mother plant needs to be diminished. The mother plants needs to be dug out and cut to pieces with a sharp knife or spade. You need to make sure that all parts have buds. Following this, all parts need to be planted in the previously mentioned fashion. It’s recommendable to enrich the soil with compost.

How to Care for Carnation

Although they do best in full sun, carnations are fine with some partial shade. Too much bright afternoon sun might cause the petals of brightly colored carnations to fade. They grow well in most soil types, but they need soil that is well draining. To get the best blooms a soil that is moist, humus-rich and slightly alkaline is best. Water
New plantings should be watered daily for a couple of weeks. After that, depending on the weather and soil type, watering can be adjusted to every two or three days. Fertilizers are available in many forms: granulated, slow-release, liquid feeds, organic or synthetic. Determine which application method is best for the situation and select a product with a nutritional balance designed to encourage blooming (such as 5-10-5). Prune plants freely to maintain the desired size and shape. Pinching plants back stimulates dense, bushy new growth and encourages more flowers.
Remove old flowers to keep plant looking healthy and prevent seed production that drains the plant’s energy at the expense of forming new flowers. 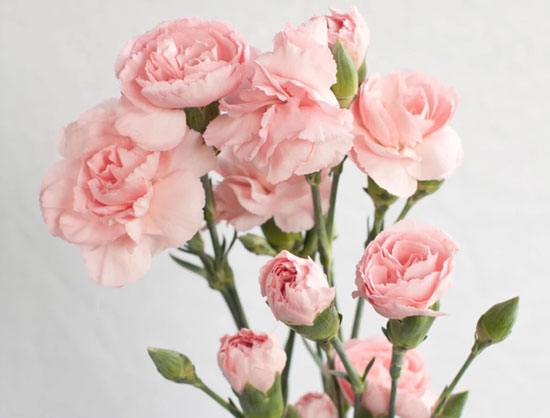 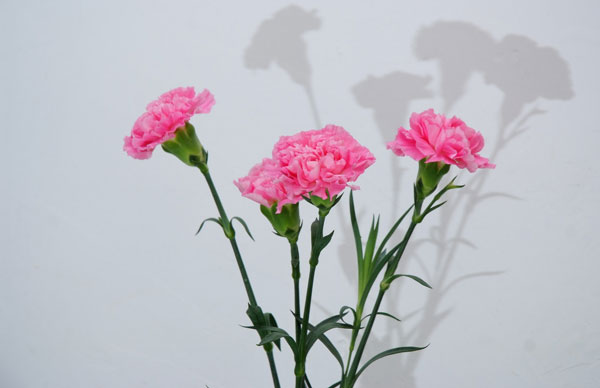 There is a dianthus plant for almost any garden space and region. The typical annual dianthus is the Dianthus chinensis, or Chinese pinks.
The perennial varieties include Cheddar (Dianthus gratianopolitanus), Cottage (Dianthus plumarius) and Grass pinks (Dianthus armeria). The foliage on all of these is blue-gray and each comes in a rainbow of colors.
Dianthus barbatus is the common Sweet William and a biennial. There are both double and single flowers and the variety reseeds itself.
Dianthus Allwood pinks (Dianthus x allwoodii) are long lasting with flowering extending at least 8 weeks. They are mostly double flowering and come in two sizes, 3 to 6 inches (8-15 cm.) and 10 to 18 inches (25-46 cm.) tall.

Carnations are not prone to special diseases. However, the risk for illnesses is higher when they are not treated properly.
Keeping a carnation at a dark location, which contains too much humidity, might lead to fungal diseases. If this is the case, the plant needs to be implanted into fresh soil mixed with nutrient-rich substrate and situated at a bright place. Normally, carnations recover quickly.
Greenflies are one of carnations’ biggest enemies. They feed from the leaves and cause them to wither. There will be no blossom. Insecticide, which is available in garden shops, helps. Organic insecticide against greenflies poses an eco-friendly alternative to chemical products.
Especially young plants are frequently plagued by snails. They devour the leaves almost completely. Apart from the visual damage, there will also be disturbances in growth and absences of budding. In spring, you should distribute snail bait around your carnations preventively. 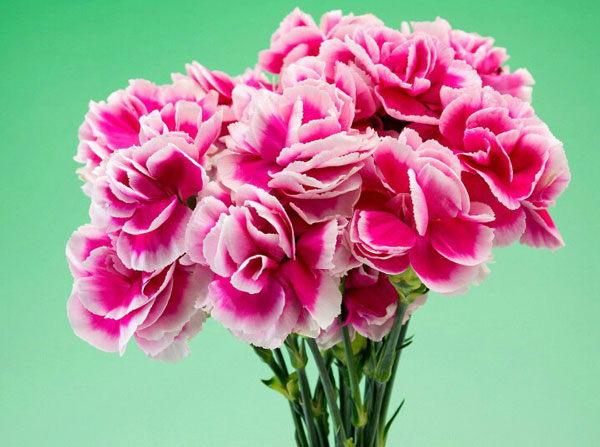 Ever-popular sweet Williams are often biennials, but generally self-seed in suitable locations. Furthermore, there is a whole range of cushion-forming and clump-forming species that are preferably used to add green to dry stone walls, rockeries or heather gardens, such as garden pinks, Carthusian pinks (Dianthus carthusianorum) and maiden pinks.
The rustic ensemble of sweet Williams (Dianthus barbatus), rosemary, oregano and parsley catches the eye against a picket fence. The cute flowers really pop against lush green herbs
To let the varied flowers of the Dianthus take the limelight, it’s advisable to position Dianthus with companions with fewer flowers but varied foliage as well as compact or loose growers that share this plant's love of sunny, dry positions: herbs! This combination doesn’t just look great in a container - with their love for permeable, drier soil, Dianthus and herbs will also thrive in gravel beds and rockeries. Stony slopes make the wood pink feel at home in particular, but other long-flowering summer China pink varieties will also add color between stones and gray gravel. Known by gardeners as “border pinks”, certain scented Dianthus (such as the Dianthus plumarius) are popular border plants, creating a scented frame around rockeries or beds.

Geranium
One of the longest bloomers in the garden, hardy geranium bears little flowers for months at a time. It produces jewel-tone, saucer-shape flowers above mounds of handsome lobed foliage. It needs full sun and is a tough and reliable plant, thriving in a wide assortment of soils. Many of the best are hybrids. Perennial geraniums may form large colonies.
Coralbells
Exciting new selections with incredible foliage patterns have put coralbells on the map. Previously enjoyed mainly for their spires of dainty reddish flowers, coralbells are now grown as much for the unusual mottling and veining of different-color leaves. The low clumps of long-stemmed evergreen or semi-evergreen lobed foliage make coralbells fine groundcover plants. They enjoy humus-rich, moisture-retaining soil. Beware of heaving in areas with very cold winters.
Iris
Named for the Greek goddess of the rainbow, iris indeed comes in a rainbow of colors and in many heights. All have the classic intricate flowers. The flowers are constructed with three upright "standard" petals and three drooping "fall" petals, which are often different colors. The falls may be "bearded" or not. Some cultivars bloom a second time in late summer. Some species prefer alkaline soil while others prefer acidic soil.

How to propagate carnation