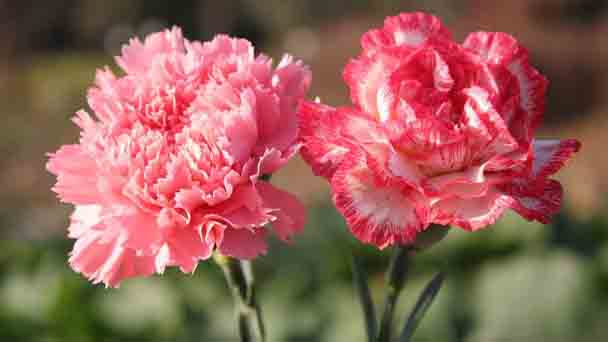 Carnation is a perennial herbaceous plant belonging to the Dianthus family and the Dianthus genus. It is a general term for many horticultural species of Dianthus. It is a perennial herb with a height of 70-100 cm and a semi-ligninized base. The whole plant is a white powder and grayish-green. The stem is hard and brittle, and the knots are enlarged. The leaves are linear-lanceolate, the whole edge is thick, and the upper part is curved outwards, opposite, and the base is holding the stem. The flowers are usually solitary and arranged in an umbrella shape. The corolla is hemispherical, the calyx is long and cylindrical, the bud is acorn-shaped, and the petals are fan-shaped. The inner petals of the flowers are mostly shrunken. The flower colors are red, pink, goose yellow, white, deep red, etc., as well as agate and other colors and borders with fragrance. 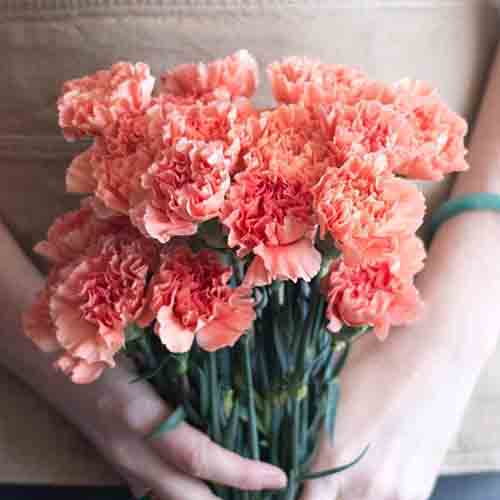 Carnations include many varieties and hybrids, which can bloom almost continuously in the greenhouse. The flowers are abundant and come in many shapes and colors. Usually, the fragrance is full and the flowering time is long, very suitable for bouquets and gardens. They are valued for their beauty, charm, lilac-like fragrance and long-lasting freshness. Since 1907, pink carnations have been used as a symbol of Mother's Day, so they are often used as flowers for mothers today.
Carnations are native to the Mediterranean region and are cultivated in large quantities in countries such as Japan, Korea and Malaysia in Asia. In Europe, Germany, Hungary, Italy, Poland, Spain, Turkey, the United Kingdom and the Netherlands are also cultivated on a large scale, and it is one of the most commonly used flowers in the world.

Carnation is a perennial herb whose roots are sometimes lignified. The stems are often clustered, cylindrical, or ridged, with joints and swollen nodes. Leaf is grass-like, opposite, and the leaves linear or lanceolate, often pale, parallel veins, rough edges, slightly connate at the base. The flowers of carnation are red, pink, purple, or white, solitary or into cymes, sometimes clustered into heads, surrounded by involucre bracts. Its calyx is cylindrical with 5 lobes, no dry membranous adhering surface, with 7, 9 or 11 veins, 1-4 pairs of base adnate bracts. Capsules of carnation are cylindrical or oblong, sparsely ovoid, with 4 teeth cracked or split at the top; seeds are numerous, round or shield-shaped; embryos are straight, endosperm often leaning to one side. 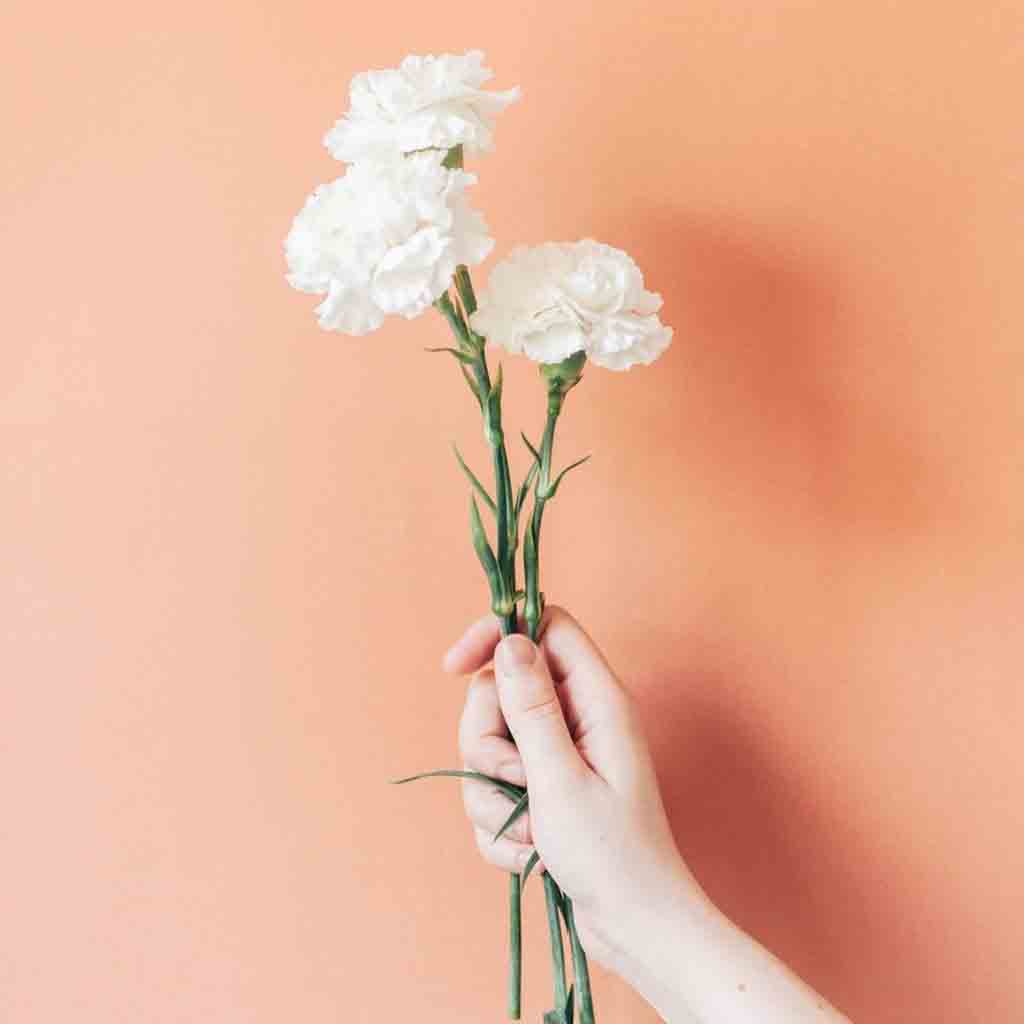 Carnation is a perennial herbaceous flower. The stems are erect, multi-branched, 70-100 cm tall, and semi-ligninized at the base. The whole plant is white powder and grayish-green. The stems of carnations are hard and brittle, and the knots are enlarged. The leaves are linear-lanceolate, the whole edge is thick, and the upper part is curved outwards, opposite, and the base is holding the stem. The flowers are usually solitary and arranged in an umbrella shape. The corolla of Carnation is carnation-shaped, the calyx is long and tube-shaped, the bud is acorn-shaped, and the petals are fan-shaped. The inner petals of the flowers are mostly shrunken. The Flower colors are red, pink, goose yellow, white, deep red, etc., as well as agate and other colors and borders.
The stalks of carnations are hard and brittle, with large knots. The flowers are solitary or 2-3 clusters, the calyx is long tube-shaped, and the petals are fan-shaped. Potted varieties include pure yellow, white, purple with white edges, light orange, bright red, red, pink, pink with orange-red deep stripes, and natural dwarf species with deep purple Lavender edges.

Carnation is an excellent variety of cut flowers. Dwarf varieties can also be used for potted ornamental. Flowers can also add flavor. With the rise of Mother's Day, this exquisite, elegant, elegant, dignified, and fragrant flower has become the world's largest-selling flower. 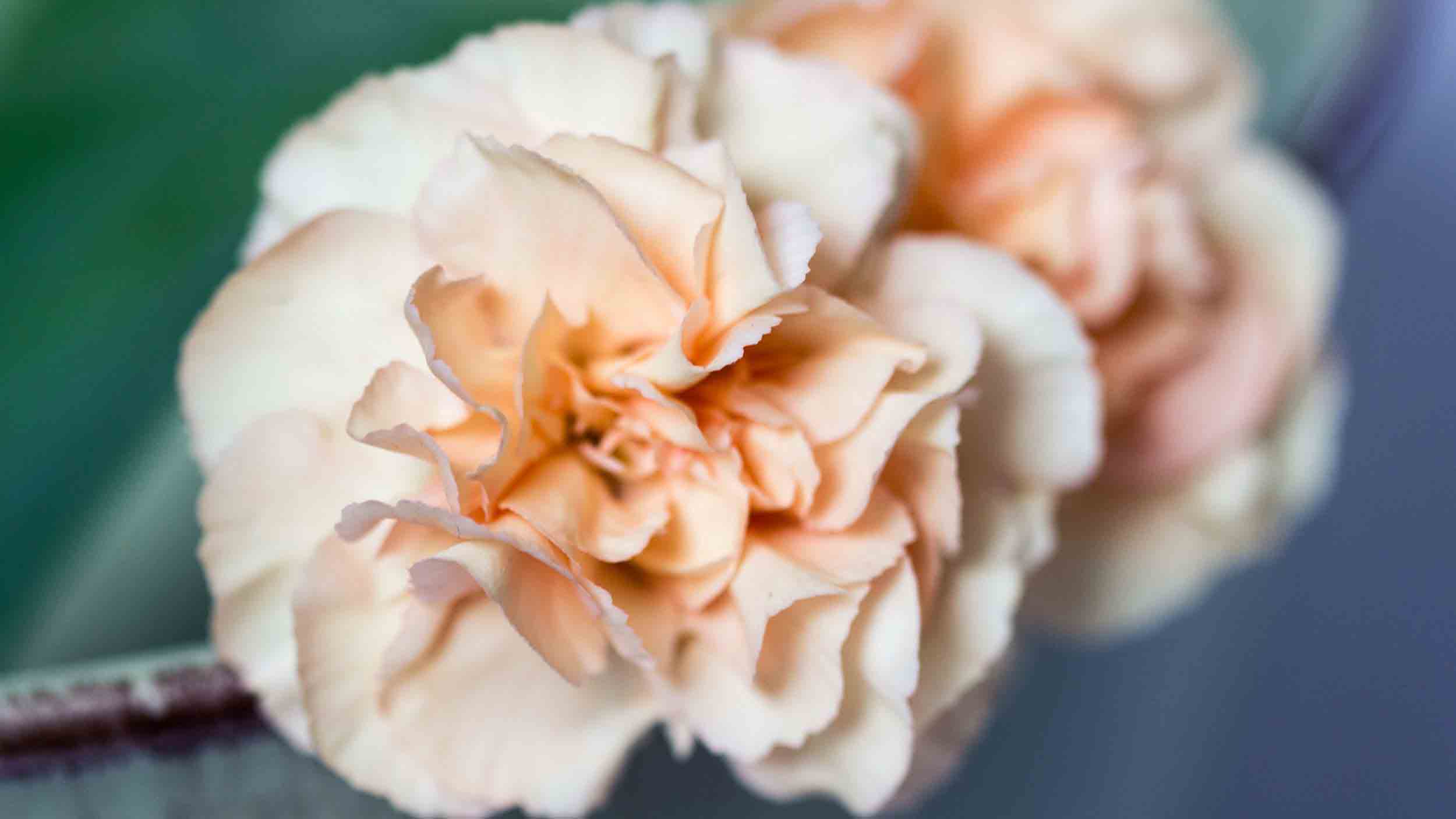 China is widely cultivated for ornamental purposes. There are many horticultural varieties, resistant to vases, and often used as cut flowers. Greenhouse cultivation can bloom in all seasons.

Carnations are native to southern Europe, the northern coast of the Mediterranean, France and Greece. Widely cultivated all over the world, the main producing areas are in Italy, the Netherlands, Poland, Israel, Colombia, the United States, etc. The Netherlands is the most important market in the European carnation market, accounting for 47% of global carnation imports in 2015. The UK directly imports about 90% of carnations from developing countries. Carnations are also very popular in Central and Eastern European countries such as Spain and Poland, Bulgaria, Slovenia, Romania and the Baltic States. The leading supplier of developing countries in the EU market is Colombia, followed by Turkey, Kenya, Morocco and Ethiopia. In Asia, Japan, South Korea, Malaysia, and other countries have a large number of cultivation. In Europe, countries such as Germany, Hungary, Italy, Poland, Spain, Turkey, the United Kingdom, and the Netherlands have large-scale cultivation. It is one of the most commonly used flowers in the world.
Carnation is one of the four major cut flowers in the world. It is mainly produced in Israel, Italy, Spain, France, Colombia, Kenya, South Africa and other countries. Countries may take advantage of the natural climate or adopt modern all-weather greenhouses to achieve annual production and cultivate new disease-resistant varieties to maintain the stability of high-quality seedling traits. 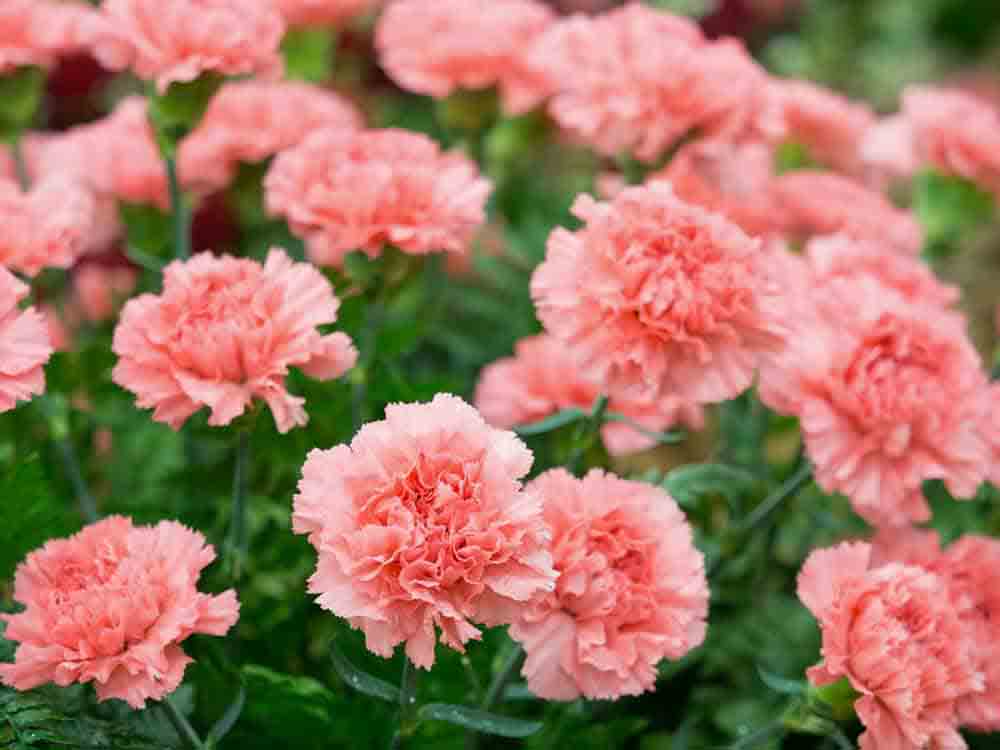 Carnations grow strong and are more resistant to drought. In rainy and humid areas, the soil is easy to harden, and the root system develops abnormally due to poor ventilation. Therefore, it is necessary to pay attention to loose soil and drain in the rainy season. In addition to growing and flowering peak season, watering should be done in time. You can always waterless to keep the soil moist. The humidity of the air should be kept at about 75%. Properly spray water to adjust the humidity before the carnations to prevent the buds from cracking in advance.

In order to promote the carnation to have more branches and more flowers, it is necessary to perform multiple toppings from the seedling stage: when the seedlings have 8-9 pairs of leaves, perform the first topping, leaving 4-6 pairs of leaves; wait until the side branches grow 4 pairs When the leaves are above, the second time is to top off the center, each side branch retains 3-4 pairs of leaves, and finally the whole plant has 12-15 side branches. During the pregnancy buds, only one flower bud is left on each side branch, and all the small flower buds and side branches that germinate in the leaf axils below the top should be removed in time. You’d better cut off the peduncle in time after the first flowering, leaving only two buds at the base of each branch. After repeated topping in this way, the plant shape can be beautiful and the flowers colorful.

How to propagate carnation