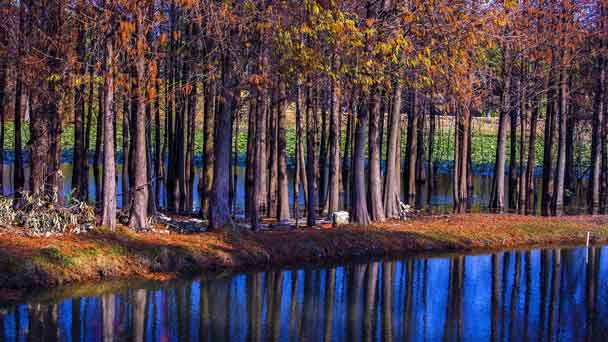 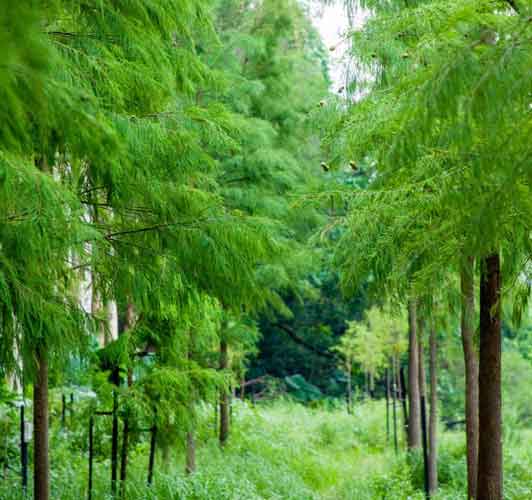 Baldcypress trees are native from Maryland along the eastern coast to Texas and as far west as the Mississippi valley. The first scientific reference to the species was made in 1640. The origin of the common name, however, seems to have been lost to time. No one is sure why Bald Cypress is called “bald” (though many guesses have been made).
This tree has inspired much poetry and prose over the centuries due to Bald Cypress’s melancholy and mysterious appearance. Longfellow refers to Bald Cypress's "towering and tenebrous boughs" that "waved like banners that hang on the walls of ancient cathedrals" in his 1847 poem, Evangeline. Naturalist John Muir in his book Thousand-Mile Walk refers to "the dark, mysterious cypress woods which cover everything" and states that "night is coming on and I am filled with indescribable loneliness." Bald Cypress is the state tree of Louisiana. 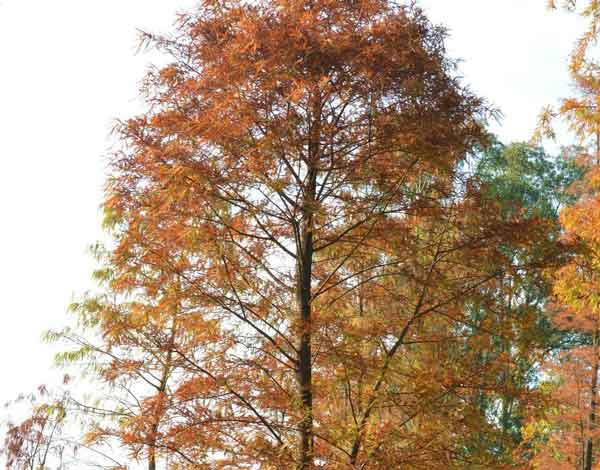 In the wild, in U.S. Department of Agriculture plant hardiness zones 4 through 9, the bald cypress tree's cones turn from green to brown in fall. By winter, they will crack open, dropping the seeds into the mud or water where, if not eaten by wildlife, they remain dormant. Winter and spring flood waters pick up the bald cypress seeds and disburse them. They will not germinate under water so they remain dormant until the flood waters recede and the soil warms. The ideal germination bed is saturated with water, but not under water, for a period of one to three months.

The Bald cypress (Taxodium distichum), also known as the swamp cypress, belongs to the Cupressaceae family. Bald Cypress is closely related to the dawn redwood (Metasequoia glyptostroboides) and also looks very similar to this tree.
The native region of the Bald cypress are the swamps and floodplains in temperate to subtropical south eastern North America. The deciduous conifer has adapted itself perfectly to life in the swamps and water: Bald Cypress forms breathing roots, also know as cypress knees, which protrude from the water around the trunk. Inside, they are filled with a roughly structured tissue and have the task of transporting oxygen to the roots.
In Europe, the Bald cypress is already relatively widespread as an ornamental tree - Bald Cypress was introduced around 1640 by John Tradescant the younger, an English gardener and botanist. When the trend towards English landscape gardening emerged in the 18th century, and was adapted across Europe, the bald cypress spread rapidly. Groups of Bald cypress can still be admired today in the artificial lakes of many large landscape parks. The trees can reach very advanced ages - there are specimens known to be over 700 years old in their native locations in the USA. 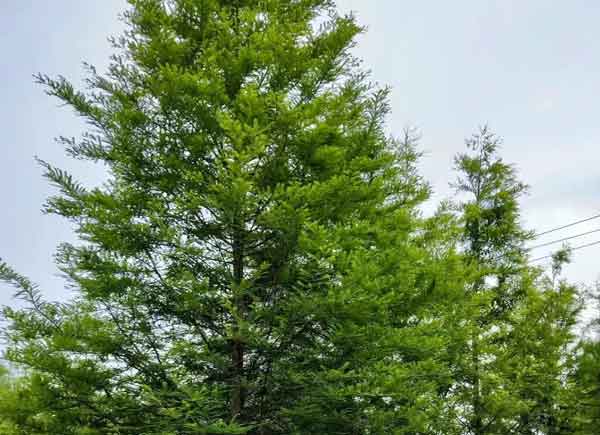 How to Grow and Care for Bald Cypress (Taxodium distichum)

Wrap the bald cypress seed in a handful of moist sphagnum peat moss, place the bundle in a plastic zip-top bag and leave it in the refrigerator for 90 days. The cold, moist conditions mimic what happens to the seed in nature, breaking down the seed coat to allow moisture to penetrate to the embryo.
The ideal potting mix for bald cypress seed germination is a wet mixture of equal parts of coarse sand and peat moss. After the 90-day stratification period, remove the seed from the bag and push it 1 inch into the soil and ensure that it's covered. The bald cypress seed needs light and heat to germinate and the best way to provide these conditions is by setting the pot on a heat mat, set to 70 degrees Fahrenheit, near a window that gets indirect sun. Continue to saturate the planting mix with water so it remains wet while the seed germinates, which should happen within three to four weeks. Germination is erratic, so don't give up hope if you reach the four-week mark and there's no sign of a sprout. It may take as long as three months. Homeowners achieve the best results by simply purchasing a new tree from the local nursery. Professional growers use grafting techniques to quickly and efficiently propagate slow-growing cypress trees for the nursery industry. Grafting is the practice of cutting a young branch from the desired parent plant and joining it to a root cutting. When the graft union heals, it results in a clone of the parent. The new plant needs to grow in containers for at least a season before planting in the ground.

How to Care for Bald Cypress (Taxodium distichum)

Bald Cypress requires quite a bit of warmth and light, as you might expect by considering the plant’s native region.  The Bald cypress is naturally found in periodically wet to wet and flooded ground. However, Bald Cypress is extremely adaptable and also grows in moderately dry, sandy soils. However, in such conditions, the trees do not form their striking cypress knee. Acidic to neutral, moist to wet loam or clay soils are ideal.  The rot resistant Bald Cypress Bonsai thrives in a very wet almost swampy soil making it a perfect plant for people who enjoy watering.  Too much water for other plants will be the Bald Cypress's heaven.  Often considered a fabled tree of the swampy south, the bald cypress is quite hardy. Trees planted in the Northeastern United States are hardy to temperatures of -20° to -29° Fahrenheit. Their USDA zone is 4-9. Use liquid fertilizer from spring to autumn every week or every two weeks regarding the dosage instructions. During the growing season solid organic fertilizer can also be applied. You will want to allow the trunk to develop well before pruning in order to prevent a straggly look. Bald Cypress naturally grow fast in the ground in their first years when grown in warm climates because they are usually found in a swamp, and must grow out of the water quickly before succumbing to the elements. 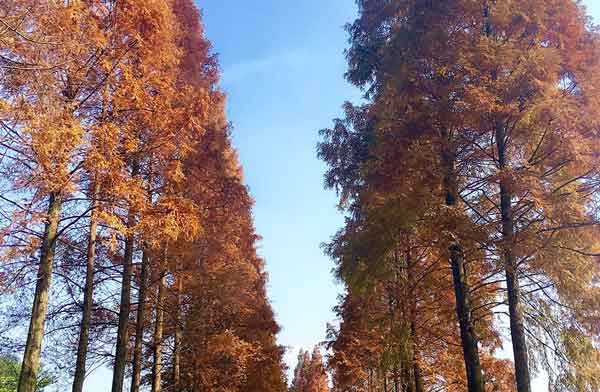 This tree provides resting and nesting cover for many species of wildlife.

Bald cypress and its cultivars make a fine stand-alone specimen or accent planting. They can be clustered together to create a grove or copse, planted near water features or along shorelines, planted as deciduous hedges or screens between properties, or in border plantings along driveways. Expect light, dappled shade from Bald Cypress's delicate, feathery foliage.
Bald cypress is relatively maintenance-free and requires pruning only to remove dead wood and unwanted lower branches which persist on the tree. 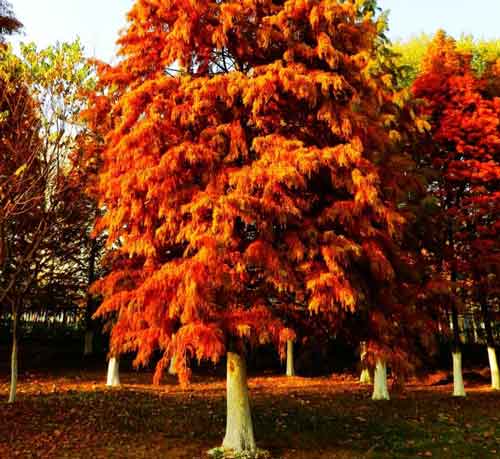 Bald Cypress‘Cascade Falls’: This weeping bald-cypress has a serpentine growth habit that requires staking early in its development until it develops a central leader and upright-growing branches that no longer require support.

Bald Cypress‘Falling Waters’: This weeping bald-cypress will only grow as high as Bald Cypress is staked. Bald Cypress can be espaliered against walls or draped over walls to allow its branches to cascade; 20 feet high and wide at maturity. Needles turn bronze in the fall.

Bald Cypress‘Peve Minaret’: Although a dwarf cultivar with closely spaced dark green needles, Bald Cypress can grow to a height and width of 20 feet and 8 to10 feet, respectively. This cultivar tolerates selective pruning that allows it to be “sculpted” into a variety of shapes and purposes. Excellent use in the Moore Farms Botanic Garden in Lake City, SC.

In very large spaces with moist soil, use baldcypress to frame and compliment weeping Willow trees. Other plants that can tolerate wet soils include Virginia sweetspire, swamp milkweed, buttonbush, common winterberry, rosemallow, and common ninebark.
To create a romantic garden setting in locations with average moisture, consider Henry Lauder's walking stick for its twisting branches, common serviceberry for its delicate white flowers, and various ornamental grasses that soften the landscape.