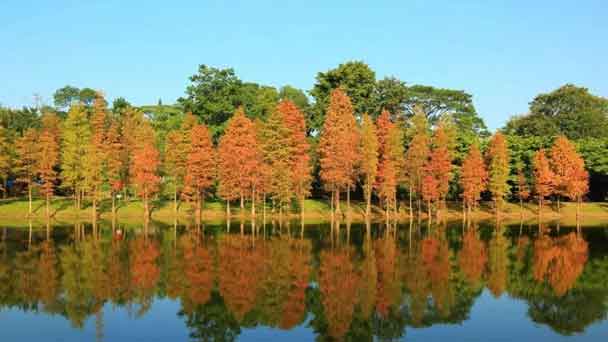 Where to Grow Bald Cypress

It's not difficult to provide your tree the best bald cypress care if you select an excellent planting location, starting with a spot in full sun. When you are planting a bald cypress tree, ensure that the soil has good drainage but also retains some moisture. Ideally, the soil should be acidic, moist and sandy. 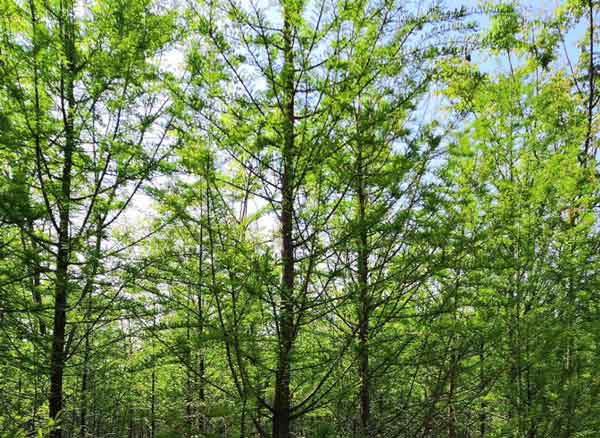 Wrap the bald cypress seed in a handful of moist sphagnum peat moss, place the bundle in a plastic zip-top bag and leave it in the refrigerator for 90 days. The cold, moist conditions mimic what happens to the seed in nature, breaking down the seed coat to allow moisture to penetrate to the embryo.
The ideal potting mix for bald cypress seed germination is a wet mixture of equal parts of coarse sand and peat moss. After the 90-day stratification period, remove the seed from the bag and push it 1 inch into the soil and ensure that it's covered. The bald cypress seed needs light and heat to germinate and the best way to provide these conditions is by setting the pot on a heat mat, set to 70 degrees Fahrenheit, near a window that gets indirect sun. Continue to saturate the planting mix with water so it remains wet while the seed germinates, which should happen within three to four weeks. Germination is erratic, so don't give up hope if you reach the four-week mark and there's no sign of a sprout. It may take as long as three months.
After the seed sprouts, lower the heat on the heat mat by 5 F every day until it's turned off. This is also the time to start reducing moisture. The soil should never completely dry out but be kept consistently moist, rather than wet. Grow the seedlings in the same filtered or indirect sunlight until they can safely be transplanted outdoors - typically after one year.

Homeowners achieve the best results by simply purchasing a new tree from the local nursery. Professional growers use grafting techniques to quickly and efficiently propagate slow-growing cypress trees for the nursery industry. Grafting is the practice of cutting a young branch from the desired parent plant and joining it to a root cutting. When the graft union heals, it results in a clone of the parent. The new plant needs to grow in containers for at least a season before planting in the ground. 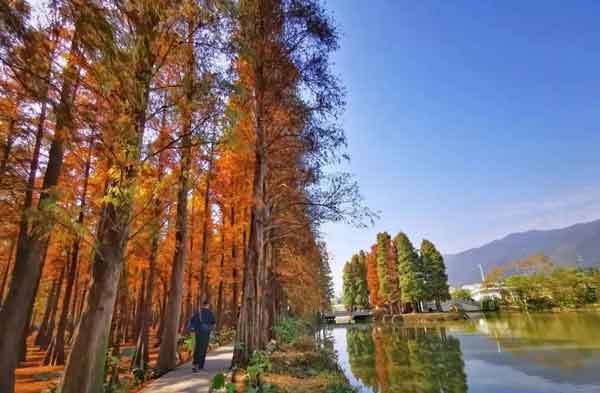 How to Care for Bald Cypress (Taxodium distichum)

Bald Cypress requires quite a bit of warmth and light, as you might expect by considering the plant’s native region. Therefore, you should plant the Bald Cypress in direct sun during its growing season. If you live in a naturally warm climate, you may be able to get away with growing the plant outside year-round. However, if you experienced colder winters, keep the Bald Cypress inside. Bald Cypress cannot tolerate low temperatures and will not do well with any amount of frost, even when grown in a container.

The Bald cypress is naturally found in periodically wet to wet and flooded ground. However, Bald Cypress is extremely adaptable and also grows in moderately dry, sandy soils. However, in such conditions, the trees do not form their striking cypress knee. Acidic to neutral, moist to wet loam or clay soils are ideal. Bald cypresses do not tolerate a higher like content in the soil. In areas at risk from early and late frosts, nutrient-poor soils are advantageous, as otherwise the trees sprout very early on in the year and drop their shoots late. 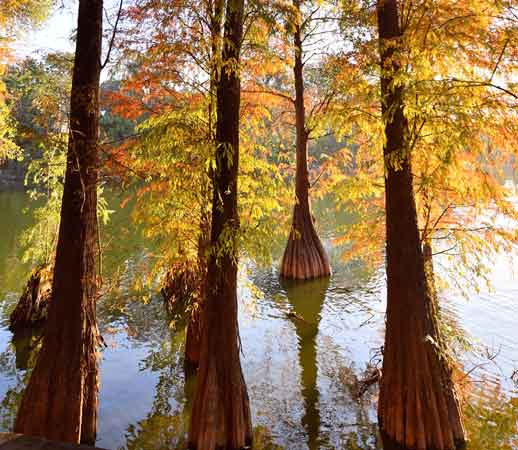 The rot resistant Bald Cypress Bonsai thrives in a very wet almost swampy soil making it a perfect plant for people who enjoy watering.  Too much water for other plants will be the Bald Cypress’s heaven. Water the bonsai from overhead to simulate rain falling from above, and fill the pot almost to the rim with water. During the summer months, especially if kept outside— which is preferred for this type of bonsai— you may have to water your bonsai twice a day or keep the pot submerged almost to the rim during the summer months; this method allows greater freedom for travel and mimics the natural environment in which this type of tree thrives.

Often considered a fabled tree of the swampy south, the bald cypress is quite hardy. Trees planted in the Northeastern United States are hardy to temperatures of -20° to -29° Fahrenheit. Their USDA zone is 4-9.

Use liquid fertilizer from spring to autumn every week or every two weeks regarding the dosage instructions. During the growing season solid organic fertilizer can also be applied.

You will want to allow the trunk to develop well before pruning in order to prevent a straggly look. Bald Cypress naturally grow fast in the ground in their first years when grown in warm climates because they are usually found in a swamp, and must grow out of the water quickly before succumbing to the elements. To get good knees on your bonsai, you will have to grow the plant in wet swampy soil which can be achieved by planting in an un-drained deep swampy bonsai pot.  Allow the tree ample time to grow and develop thickness of the trunk before cutting back. Because Bald Cypress are fast growing trees it is important to understand that wires will damage the bark if they are not watched closely. Branches can be tied town using a soft raffia twine, tied near the end of the branch to be pulled down, tying the other end to the base of the tree trunk, or to something else. If the branch to be pulled down is thick, you can make a V-shaped incision at the underside of the limb where it joins the trunk. This incision will close when the branch is pulled down, and the wound will heal quickly.  You can shape the foliage by pinching back new growth. Let a branch grow for a season if you want to thicken it, then cut it back the following spring. New growth will sprout at the site of your most recent pruning. Twigs sprout at sharp, acute angles, so it is not difficult to develop a gnarled-looking branch. You will want to prune throughout the summer, leaving the task of shaping in the fall just before dormancy. Pluck off leaves that sprout from the trunk unless you want them to develop into a branch.  A hallmark quality of the Bald Cypress is the “knees” of the mature tree.  They are easily developed by going up to 3 years without repotting or root pruning promoting a root bound situation wherein many of the roots will have bent almost double. If you carefully bring one of these doubled bends to the surface and let it protrude through the moss cover, you will be forming a knee which should thicken and develop well over subsequent years. The bald cypress lends itself to formal upright, informal upright, slanting, literati, twin-trunk and group styles. 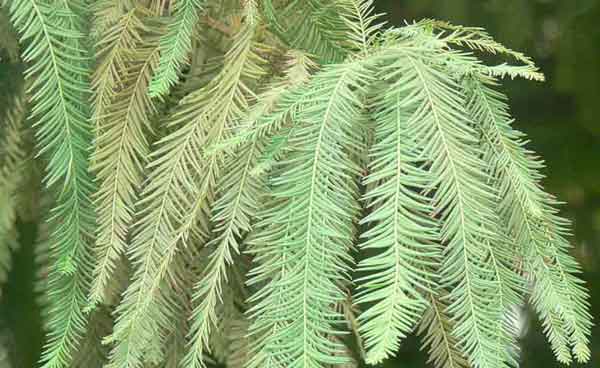 Bald Cypress ‘Cascade Falls’: This weeping bald-cypress has a serpentine growth habit that requires staking early in its development until it develops a central leader and upright-growing branches that no longer require support.
Bald Cypress ‘Falling Waters’: This weeping bald-cypress will only grow as high as it’s staked. It can be espaliered against walls or draped over walls to allow its branches to cascade; 20 feet high and wide at maturity. Needles turn bronze in the fall.
Bald Cypress Shawnee Brave (‘Mickelson’): Strong narrow pyramidal to columnar form with a dense crown; 50 to 75 feet high and 15 to 20 feet wide. The parent is 75 feet high and 18 feet wide. Needles turn orangish-brown in the fall. Introduced by Earl Cully of Heritage® Trees, Inc. Jacksonville, IL.
Bald Cypress ‘Pendens’: Weeping pyramidal form has nearly horizontal branches with drooping or nodding tips.
Bald Cypress ‘Peve Minaret’: Although a dwarf cultivar with closely spaced dark green needles, it can grow to a height and width of 20 feet and 8 to10 feet, respectively. This cultivar tolerates selective pruning that allows it to be “sculpted” into a variety of shapes and purposes. Excellent use in the Moore Farms Botanic Garden in Lake City, SC. 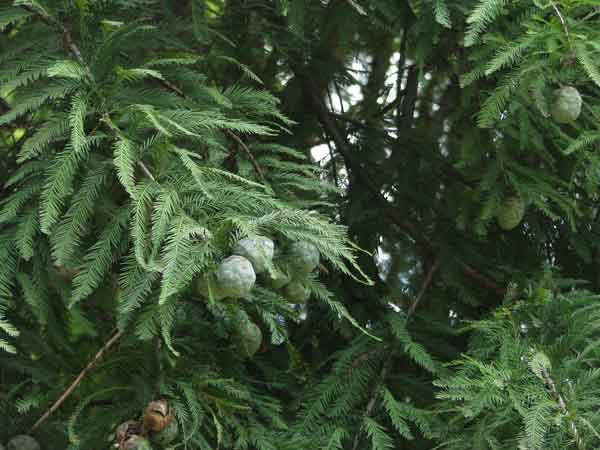 Before planting a bald cypress tree, note that the trees only thrive in U.S. Department of Agriculture plant hardiness zones 4 through 9.

Are Bald Cypress toxic to dogs?

Bald Cypress, the tree & mulch, is Not poisonous. But there is a new hybrid, created by man, that is, the Leyland Cypress. “This poses a greater threat to animals, specifically horses and dogs, who have a tendency to try to eat the leaves.