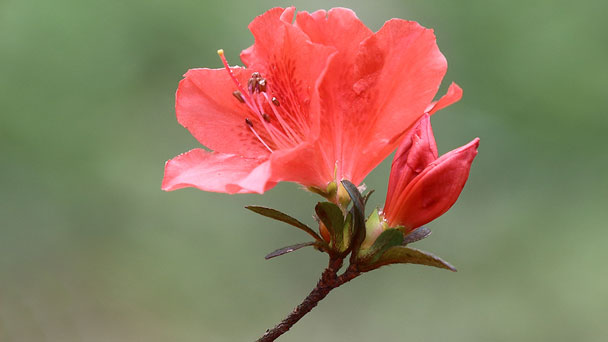 Most large-leafed varieties require dappled shade; avoid deep shade or full sun. A sunny spot that receives a few hours of shade is perfect.
Soil should be well-drained, humus-rich, moist, and acidic (pH 4.5–6).
Amend planting areas with compost, peat moss, or a substitute, only if your soil is poor. Rhododendrons have shallow root systems and need moist soil and mulch to keep them from drying out. Plant in full sun to increase flowers and avoid mildew problems. Shrubs need a minimum of 6 hours of full sun daily. Plant on the sheltered side of a windbreak. If subjected to cold, dry winds, their leaves and buds dry out and die. Plant in a site that receives afternoon shade, especially in hot areas. In tropical zones, azaleas will bloom in full shade. 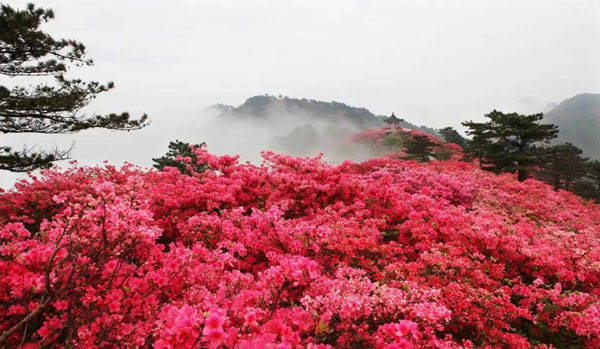 When to Grow Rhododendrons

The American Rhododendron Society (ARS) recommends the following planting times based on your climate. 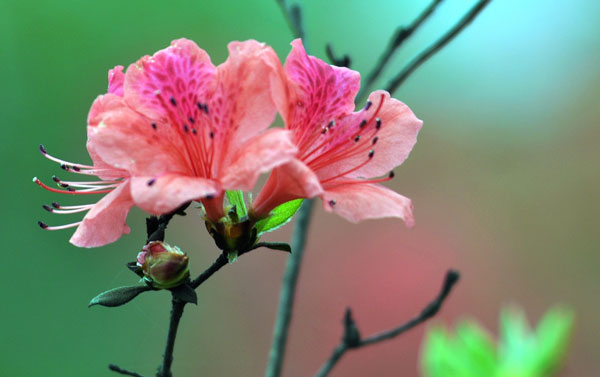 How to Grow Rhododendron

Only species rhododendrons come true from seed. Named cultivars must be propagated from semi-ripe cuttings, grafting or layering.

Steps for Rhododendron Propagation with Grafting

Grafting is used where cuttings cannot be rooted. Rootstocks are taken from R. ‘Cunningham's White’. Saddle grafting (which involves cutting an inverted V in the scion stem) is done from January to March, and spliced $3 is done in spring

Rhododendron cuttings are taken from the current year’s growth during late summer or autumn, once the shoots have completed their seasonal growth and the bud is fully developed. Take cuttings with a heel, and then wound the stem to encourage rooting
Cuttings of evergreen azaleas are taken in mid- to late-summer. Deciduous azaleas are harder to propagate from cuttings; commercial growers take
A method of growing new plants from parts of an existing plant, such as sections of root, stem, leaf or bud. When prepared correctly and planted in the right conditions, they can produce roots and eventually become independent plants. There is a wide range of different methods for taking cuttings, depending on the plant and time of year.
cuttings in early spring, and grow plants on in frames for up to two seasons before planting out

Steps for Rhododendron Propagation with Layers

Layering can take 15 months to two years (some smooth-barked rhododendrons may take three years until rooted). Check layered shoots in the autumn of the second year.  If not well-rooted, partially sever and lift in the following spring as growth begins. 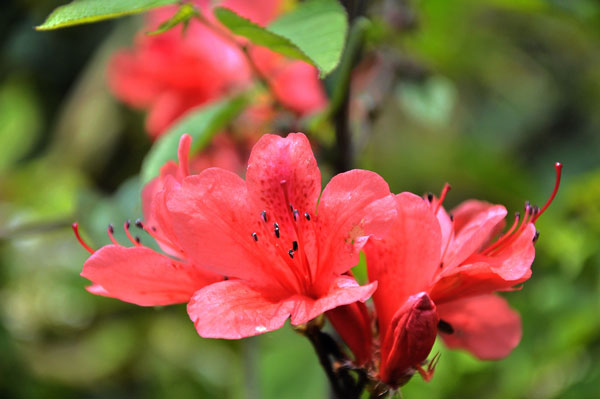 How to Care for Rhododendron

Most large-leaf evergreen rhododendrons prefer semi-shaded sites. Too much direct sunlight, especially in winter, should be avoided, as it can dry out the plants. Their leaves may turn brown and drop. You may wish to plant them in the dappled shade of deep-rooted trees like pines and oaks. A west-, east- or north-facing bed against a foundation wall is an ideal site, provided that it is sheltered from the wind.

When you consider that native rhododendrons thrive in the dappled woodland shade and under trees with which they have grown (planting a young rhododendron under a mature tree is tricky and they often fail), it is easy to understand their preference for moist, well-drained soils high in organic matter.  Rhododendrons and azaleas have shallow fine hair-like roots and do not tolerate water-saturated soil conditions--but do require moist soils. Monrovia's rhododendrons are container-grown in a custom soil blend with added mycorrhizae so once planted in the correct soil, they will naturally get off to a great start. If your soil lacks excellent drainage, amend prior to planting with a mix made for acid-loving plants.

Compared to other common landscape plants, rhododendrons have very shallow roots. This helps ensure they get plentiful oxygen, but it also leads to stress if the soil dries out. Before you water, pull back some mulch and touch the soil with your hand. Water when soil feels dry to the touch, but underlying soil stays moist. This means watering more during hot, dry periods and watering less in cooler, wetter times.
When you water, water the soil around the plant, extending out as far as its branches reach. Water deeply and thoroughly so your plant receives about 1 inch of water, including rainfall, per week. If possible, use drip irrigation to avoid runoff and discourage the fungal diseases that can strike wet leaves.
Temperature and Humidity
RhododendronsIn should be planted in warmer regions, the first choice for planting time is fall, just before the rainy season.

Feed established rhododendrons twice a year, once in early spring and again 12 to 16 weeks later. Pennington UltraGreen Azalea, Camellia and Rhododendron Plant Food 10-8-6 provides just the right blend of primary nutrients to support attractive rhododendron blooms and foliage. Plus, this premium specialty fertilizer includes essential micronutrients that help prevent nutritional deficiencies. Then it keeps feeding your rhododendrons for up to four months.
Follow the label instructions for the size of your shrub. Broadcast the recommended amount over the area around the plant, extending out about 6 inches past the branch tips. Gently scratch the fertilizer into the soil without disturbing shallow roots. Don't be tempted to overfeed. Rhododendron roots are sensitive to too much fertilizer, so heed what the package says.

In general, do not prune spring-flowering shrubs such as azaleas and rhododendrons. If you need to reduce height, prune after flowering in the spring. Otherwise, just remove dead, damaged, or diseased branches at any time of year.  On young and old plants, simply snap off spent Flower stalks by bending them over until they break away from their stems. Be careful not to damage growth buds at the base of each flower stalk.

Rhododendrons are susceptible to a wide variety of pests; however, when properly sited, planted and maintained, pest problems are limited. Following two to three years of establishment, rhododendrons require very little maintenance and are relatively pest free. When problems do arise, take care of them immediately, before they get out of hand and worsen or spread to other shrubs.
Diseases might include root rot, blight and dieback. A few common insect problems are lace bug, mites and scale. Borers are an occasional, but serious, problem. Homeowners should be on the lookout for this pest. 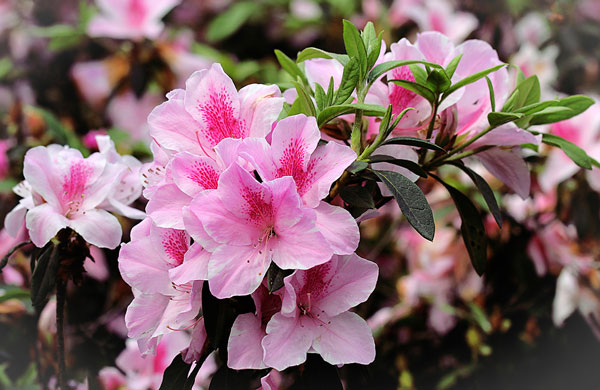 Rhododendron ‘Pleasant White’ – a dwarf, evergreen rhododendron with white flowers. It will suit a small garden, in a semi-shady border, or can be grown in containers.
Rhododendron ‘Scintillation’ – a large shrub, growing to over 2m. The pink and Apricot blooms are very exotic and it will brighten up any area in part shade. A very hardy cultivar, it’s a good for more exposed and northerly areas.
Rhododendron ‘Nancy Evans’ – a gorgeous, golden-yellow compact rhododendron with leaves that are bronze when young but mature to a deep green. It looks good in a border and in containers.
Rhododendron ‘Vulcan’ -a compact variety, with long leaves and large, scarlet blooms that will suit containers or a mixed border. It needs a sheltered spot in partial shade, and protection from winter winds.
Rhododendron ‘Orakel’ – a hybrid with purple blooms with a crimson-red blotch. Hardy and compact it’s ideal for a mixed border or container display. Protect from harsh winter winds.
Rhododendron yakushimanum ‘Kochiro Wada’ – one of a group of compact hybrids, this variety has white flowers, with silvery young leaves that mature to dark green. The Royal Horticultural Society has given it the prestigious Award of Garden merit (AGM). 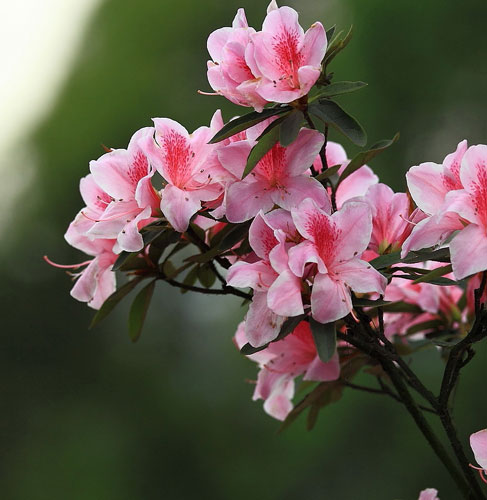 Why has my rhododendron died?

Rhododendrons sometimes succumb to over-watering. Too much water around the rootball prevents the roots from being able to take up vita nutrients and can, effectively 'suffocate' the plant. However, under-watering can also kill rhododendrons. Their roots are shallow, meaning they don’t have a large tap root with which to draw water up from deep in the soil. Other reasons for sick or dead rhododendrons include planting too deeply (remember rhododendrons are shallow-rooted) and applying too much fertiliser.
To revive a sick rhododendron, first check its roots, and replant it if it's growing in too wet or dry soil, or if planted too deeply. Then, prune away damaged stems. Water sparingly and apply an ericaceous liquid feed as the flower buds are developing in spring, only.

Why is rhododendron bad?

Potentially toxic chemicals, particularly 'free' phenols, and diterpenes, occur in significant quantities in the tissues of plants of Rhododendron species. Diterpenes, known as grayanotoxins, occur in the leaves, flowers and nectar of Rhododendrons. These differ from species to species.