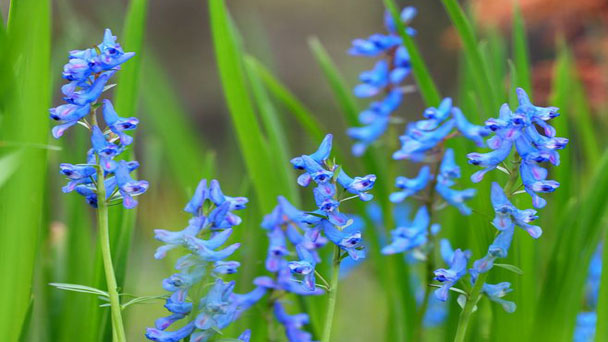 Although Corydalis presents itself with the daintiness of an alpine plant, it is not to be trusted in the rock garden. Its robust and straightforward approach to growth and reproduction make it too competitive to co-exist with neighbours of a more delicate disposition. At the Savill Garden in Windsor Great Park, there are even large drifts of this species established in meadow grass.

When to Grow Corydalis (Fumewort)

Corydalis Plants are planted in open ground in the second half of summer or during September. At this time, you can purchase dormant tubers. If such planting dates are met, the tubers have time to adapt to new conditions and build up the root system before the onset of frost. In addition, new, young shoots are formed in the tubers in the autumn months, which will appear in the spring. 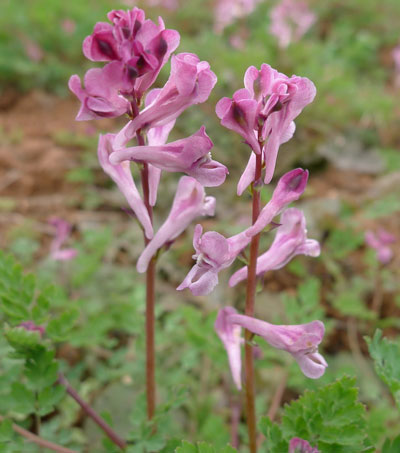 How to Grow Corydalis (Fumewort)

The seed method is probably the most common for the propagation of this flower. Varieties such as Corydalis dense, Marshall’s and bracts reproduce very easily by seeds and often even form self-seeding.
For propagation by seeds, you can use planting material collected from garden plants. When using such seeds, flowers are protected only by specific, and not varietal characteristics, therefore, the appearance of the resulting bushes can be strikingly different from the mother flowers.
Full ripening of seeds occurs in June, but you should not wait for it. From fully ripened and opened seed pods, the seeds fall to the surface of the soil, from where they are quickly carried away by ants.
Self-collected planting material can be sprinkled with wet sand and left to ripen at room temperature, making sure that the sand is constantly wet.
At a high level, the germination of seeds is maintained only until they begin to dry out, therefore, sowing is carried out immediately after collection. After a week, the seeds will already lose their life-giving moisture.
Wet sphagnum moss will help to extend the viability of seeds, however, even in such conditions, after a month, germination will be zero.
Sowing is carried out in the summer months, using small Flower greenhouses with transparent lids or individual cups.
There should be drainage holes at the bottom of the container, and for the first time, a moisture-wicking layer in the form of expanded clay or broken brick is laid.
The cups are filled with soil consisting of sod and leaf humus, peat with a large amount of river sand in the composition. Seeds are sown to a depth of about 0.5 – 1 cm, covered with earth and thoroughly moistened with a spray bottle.
Crops are covered from above with glass or transparent plastic to maintain high humidity. The soil is kept uniformly moist all the time, but not swampy. Next spring, subject to the rules of agricultural technology, only cotyledons will hatch.
Planting seedlings in open ground is carried out in the spring when the snow melts and the last night frosts leave. The first buds will be decorated with Corydalis plant grown from seeds for 3-4 years of life and often on each bush there will be only 1 – 2 flowers.
For 4 – 5 years, flowering will become more abundant, and the first division of tubers will occur when the plants are 5 – 6 years old. 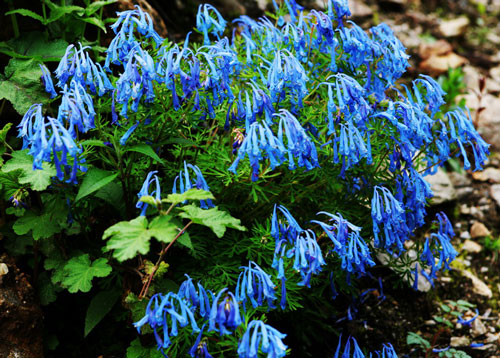 By dividing the rhizomes, it is possible to propagate the Corydalis. The division of plants aged 3 to 5 years is carried out during transplantation. Bushes are dug out of the ground. shake off the soil residues from the root system and cut into pieces.
For division, a sharpened, sterile knife is used. As a result of division, each part should receive its own root system with a renewal bud.
Do not worry if the delenka does not have tubers – after planting for some time, these plants will be able to form new nodules.
The wound surface, which appeared during division, is treated with charcoal powder or wood ash for drying and disinfection.
Delenka are seated in new areas and watered. It is worth placing such plants in partial shade – direct sunlight immediately after division can cause additional stress. 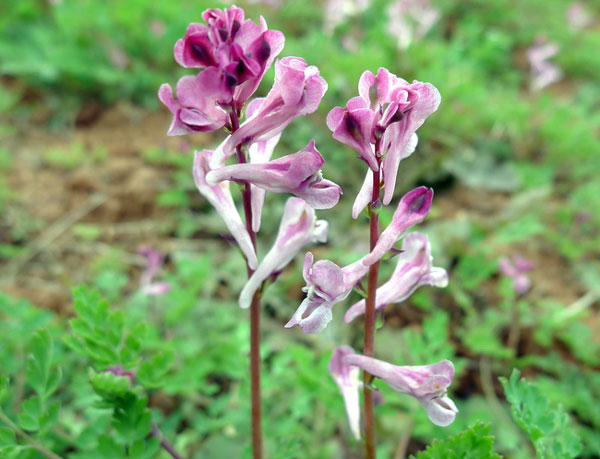 How to Care for Corydalis (Fumewort)

Corydalis are shade lovers, and useful to brighten up shady spots in your garden with color. They can tolerate some sun, but afternoon sun would probably be too much for them, especially in zone 7 during hotter summer temperatures.

The corydalis needs a lot of water, but they can’t be allowed to sit in water for long periods of time. They can be watered once or twice a week, especially when it gets hot. However, if the soil around this plant is still damp, don’t water it again until it has dried out. Too much water around the plants can cause the roots to rot. If you have seedlings, water them often to keep them damp. Be careful in the winter not to let the soil stay moist, as the roots will freeze.

Plant corydalis in a cool shady spot. Basic temperate humidity is appropriate for these naturalizing shade plants. These flowers are somewhat fussy about temperature and will not survive in growing zones lower than 5 or higher than 7.

After the formation of seed pods and the maturation of the planting material, the entire ground part of the flower begins to wither and finally dies off completely. Dry leaves can be cut off, but there is no need to rush to cut – the leaf blades feed the underground tuber until the last moment and help it stock up on food for development in the next season.
Pruning is carried out with a sharply sharpened and sterilized tool – a garden knife or pruning shears.

The corydalis plant has an enviable resistance to a variety of diseases and pests. In lowlands and areas of stagnant water, plant roots may rot. When humidity is too high and air circulation is insufficient, fungal diseases can occur. Viral diseases show up in leaves with spots and deformed buds that are different from flowers, and the affected plants cannot be treated -- they are destroyed. When planted outdoors, moles and small rodents can taste the roots of the flowers. Nematodes attack the tubers of harmful insects. 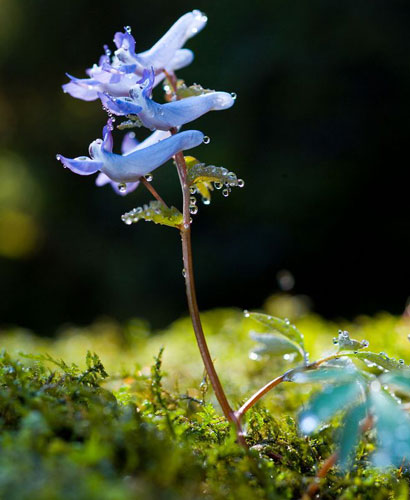 Corydalis Dense Or Haller -Corydalis Solida
A widespread variety in horticultural culture, on the basis of which many modern varieties and hybrids have been bred. Represents compact plants up to 15 – 30 cm high with dissected leaves with rounded segments.
Corydalis Solida Beth Evans
Blooming perennials up to 25 cm high with delicate, light green leaves and large pink buds. The center of the flowers is often colored lighter, pink.
Corydalis ‘george Baker’
Small bushes grow up to 15 – 30 cm and during the flowering period they throw out peduncles with large inflorescences of bright and large flowers of a red or pink hue.
Corydalis Yellow – Corydalis Lutea
The Corydalis lutea is quite a large corydalis, widespread in Europe. It is a decorative perennial with emerald green leaves and small inflorescences on the tops of the shoots. The buds are painted in a bright yellow shade. The flowering period can come at any time from May to September. Corydalis lutea reaches a height of 30 – 45 cm.
Corydalis Hollow – Corydalis Cava
Most often used in traditional medicine. Plants are native to Turkey, Iran and the Caucasus. Early flowering perennials up to 15 cm in height. Plants of this species need cool stratification during seed propagation. When grown outdoors, may be prone to rot.
Corydalis Marshall  – Corydalis Marschalliana Pers
The corydalis subspecies is hollow, characterized by cream or pale yellow flowers. In its natural habitat, it grows in the Balkans, Crimea, the Caucasus and north-west Iran. 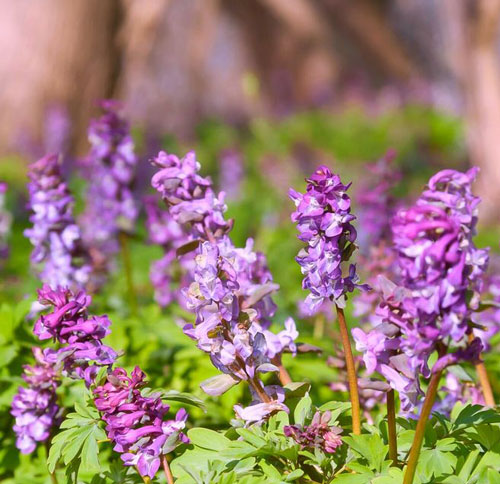 The onset of flowering can occur from March to May inclusive. Some varieties bloom during the summer months. The specific flowering times vary from species to species, but flowering times often remain unchanged at around 3 weeks. Mountain plants usually bloom first, and only then forest blooms come. The Far Eastern Corydalis plant will decorate the garden with buds among the latter – in late spring – early summer.
The onset of early flowering will also be facilitated by planting in a sun-drenched area where snow melts first, however, such plants will fade earlier, and the flowering period will be shorter.

What is corydalis good for?

Corydalis is used for mild depression, mild mental disorders, emotional disturbances, severe nerve damage, and limb tremors. It is also used as a mild sedative and tranquilizer, as a hallucinogen, to lower blood pressure, and to relax spasms in the small intestine.