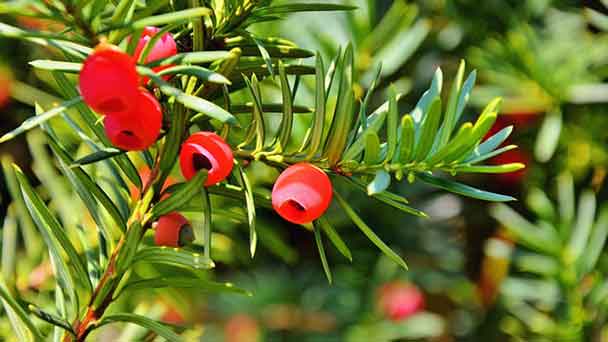 Yews are an evergreen tree that is often seen as a manicured shrub rather than a tree, but being able to grow one in time plays a vital role in every garden. While we love color and variety, it's just as important to keep dark greens calm in a balanced garden, and yew trees certainly have that and can grow anywhere in the garden.
Where do Yew Tree GrowWhen to Grow Yew TreeHow to Grow Yew TreeYew Tree Propagation with SeedsYew Tree Propagation with CuttingsHow to Care for Yew TreeYew Tree Lighting RequirementsYew Tree Soil CareYew Tree WateringYew Tree Temperature & Humidity CareYew Tree FertilizerYew Tree PruningYew Tree Pests & DiseasesVarieties of Yew TreeYew Tree Care FAQIs Yew Tree Toxic?Why is the yew tree called the tree of death?

Where do Yew Tree Grow

The Yew Tree is quite flexible in the choice of location. Yew tree is suitable for shady places as well as sunny spots. However, optimal is a half-shady location. If it is too dark, the growth rate decreases. In sunny locations, especially with alternating rain/snow and strong solar radiation, it can result in drying up. Especially young yews react hypersensitively to strong and direct sun radiation. Yew trees with high growth are to be wind protected. Strong winds could bend a grown peak shape apart.

When to Grow Yew Tree

When the Yew trees are moved with a mass of soil attached to the roots, transplanting may be carried out in early autumn or early spring or, in mild climates, in winter; however, when there is considerable root disturbance, September and April are the best months for the work. Whether specimen or hedge plants are planted, the ground should be prepared beforehand and, if there is any danger of waterlogging, arrangements must be made for draining the ground. If, when the trees are received, the roots appear to be dry, soak them with water before planting, and give them a good watering as soon as the work is completed. If the weather is hot and dry the trees should be shaded from the hot sun for a week or two and sprayed twice a day with water. The removal of the ends of some of the branches will assist in re-establishing the trees by lessening the strain on the roots.
Should the Yew tree leaves fall, there need be no cause for alarm; it is one of Nature's means of assisting recovery. If, however, the leaves shrivel or turn brown and remain on the branches, root action is not proceeding in a satisfactory way. In such a case, cut the branches back, spray the trees several times a day, and shade from the sun until new shoots appear. Severe pruning, when required by old trees, should be done in March or April. 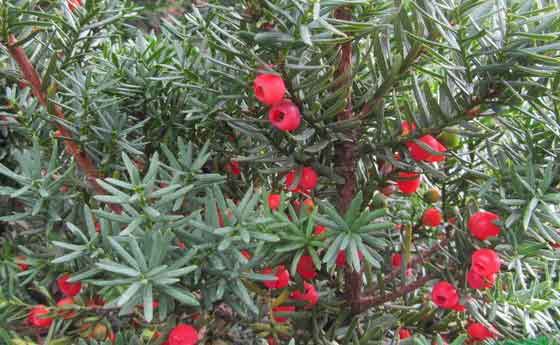 How to Grow Yew Tree

Though you can grow Yew tree from seed, it is a very long, precise series of steps that you cannot get wrong or you will have to start again.
Get a loose, damp, but not wet soil medium such as sterile potting soil or peat moss and mix with the seeds you want to sprout. Two cups of the medium should be fine for all but a huge amount of seeds.
Put the yew tree seeds and medium in a large enough zip-lock type freezer bag that will hold the two cups of the medium. Seal the bag and poke 3 or 4 pencil lead sized holes in the bag and write the date on the bag.
Put this in a spot out of direct or strong light for 6 months at room temperature - as close to 20 Celsius or 68 Fahrenheit as possible.
Next, put the bag in your fridge (not the freezer) for 10 months. Take a look occasionally starting after 6 months to see if any of the seeds have rooted. If so, take the seed out and put it in a 10 cm (4 inches) pot of its own with a mix of compost and sand. Bury the seed about 1 cm (3/8 inch) deep, and be careful not to break the root. Put in a bright, non-direct sun spot and keep the soil moist.
After 10 months, plant all the seeds as above.
If after the first year some of the seeds don't sprout, leave them outside in a shady area, keep moist and leave until they sprout - winter and summer. It can take years for all of them to sprout.

You can propagate Yew tree as many as you want from cuttings:
First, get 10 cm (4 inch) pots and 3/4 fill with compost and sand for the soil mix.
Take Yew tree cuttings of 10-15 cm (4-6 inches) long new growth (green twig), and pull off all the leaves of about half of it on the lower end of each one.
Make a hole in the soil with your finger or a pencil in each pot, and put the lower end of the cutting in the soil, so that half is above the soil, half in the soil.
Gently firm the soil around the cutting to make full contact with the soil, but don't pack it down hard.
Water, and put in good light, but not direct sun. Keep the soil moist.
Cuttings root easily, and most should take without issue. Don't let the cutting in the pot get frost. 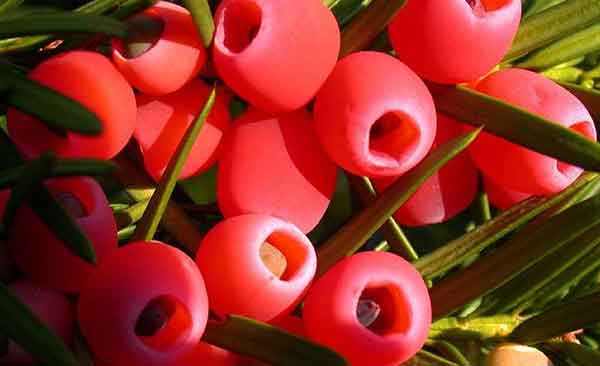 How to Care for Yew Tree

Yew plants can be grown in partial shade, even full shade. Preferring the shader spaced in the mountain garden, they brighten the north side of tall walls and stucco homes. Yew tree grows well under the canopy of other trees and among pine forests.

Water your yew tree weekly in dry weather for the first year after you plant it. During drought, or if your established yew tree grows beneath deep eaves or elsewhere that rain doesn't reach, water every week to 10 days during the spring-to-late-fall growing season. Never water enough that the soil gets soggy.

Yew trees grow in all cold climate conditions in zones 2-8. In scorching summer weather, the shrubs will appreciate more water and shade. Humidity typically isn’t a problem for yews, though they can struggle in scorching, humid summer weather.

Wait a year after planting to fertilize your yew shrub in early spring. If you're in a frost-free area, feeding in late fall is acceptable. Fertilize with 1/4- to 1/2-inch mulch of well-composted manure; increase that to 1 inch if your soil is poor. Spread the manure to the shrub's drip line, where rain falls from the outer branches. Another option is granular, high-nitrogen 12-6-4 fertilizer. Scratch the granules evenly into the soil around its base, keeping them at least 1 foot from the trunk and extending to the drip line. Water them in when you're done. Feed 1/3 pound of fertilizer per 1 foot of the larger of your shrub's width or height. If the larger measurement is 5 feet, for example, use 1 2/3 pounds.

In order not to have to wait for a fully-grown overall appearance for years, regular pruning for yew tree is to be carried out once a year, radical pruning every couple of years.
The following you should know about proper pruning:

The yew hedge does not rank among the robust and insensitive plants. Species-specific diseases do not exist. Predominantly a wet keeping leads to diseases.
Root rot
If waterlogging has been developed by too much moisture, the yew tree mostly reacts instantly with root rot. You can plan out small yews and let the root bale dry for approximately two days. Cut the rotten parts of the root and subsequently replant the yew tree in fresh and dry soil. Usually, the yew tree recovers again.
In addition, pests that infest yews in particular do not exist. However, lice occasionally appear in the yew hedges, especially if lice-infested plants are in the immediate surrounding, and then continue to spread on the yew. Mostly it is going about the brown scale that can get to the yew tree due to strong winds.
Brown scale
The brown scale is predominantly domestic in big cities and is named after its shield that resembles a scale. This ensures that even chemical insecticides cannot harm it in most cases. With alcohol, the shell can be softened so that insecticides can have a stronger effect.
The brown scale is recognizable due to the round brown surface, which is equipped with white dots. Primarily the brown scale takes roots in colonies at the plant stem and the leaves. They excrete honeydew which, in turn, results in a clogging of the leaves and these cannot absorb oxygen or light. Consequently, they die after the brown coloring of the leaves. 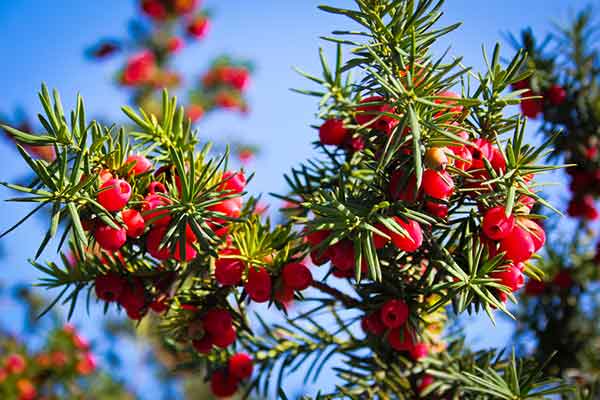 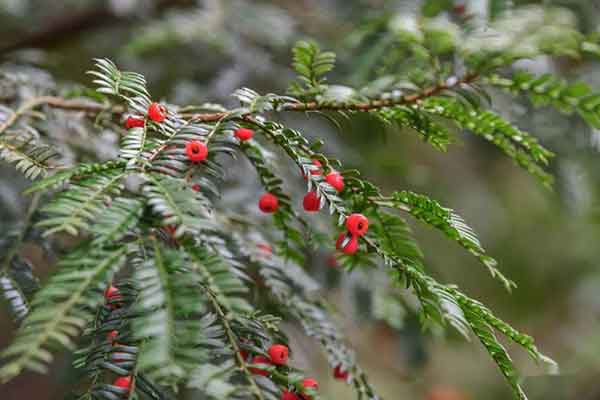 Yew plants create an extremely toxic compound in all parts of the plant, except for the fleshy red fruit they produce. This serves as a self-defense mechanism to help prevent animals from eating them. Except for a few animals that have adapted to the toxin and can eat them (sadly, deer are not susceptible to the toxin), this toxin will affect almost all animals. So be careful where you plant these shrubs.

Why is the yew tree called the tree of death?

A popular legend relates how Pontius Pilate was born under this tree or played as a child in its branches. Drooping branches of old yew trees can root and form new trunks where they touch the ground. Thus the yew came to symbolise death and resurrection in Celtic culture.