How to grow and care for Cocos Nucifera 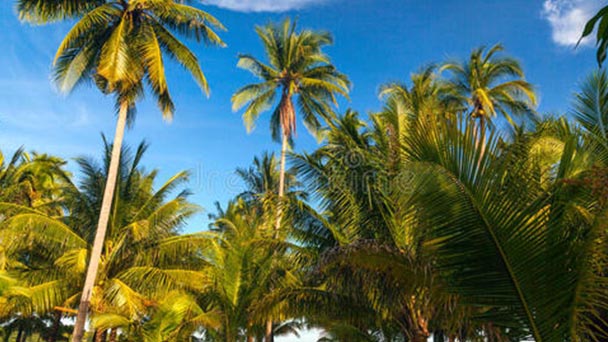 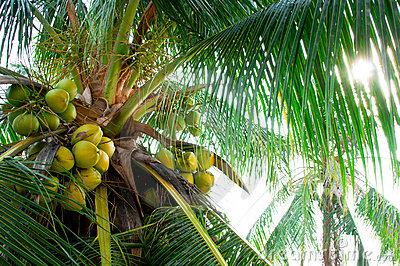 How to grow Cocos nucifera

Plant fruit one by one at an Angle of 45° at the bottom of the trench and bury the soil to one half to two thirds of the fruit. When the bud is 10-15 cm long, move the bud to a moderately shaded nursery and plant Cocos Nucifera, paying attention to watering, draining, weeding and fertilizing. Generally a year or so, about 1 meter high seedlings can be out of the nursery.

Cocos nucifera is commonly cultivated in the rainy season. According to the strains of spaced 6 x 9 m or 7 m x 8 m, plant a total of 165 ~ 180 per hectare, the hole is 60 cm * 70 cm * 80 cm, hole into the organic fertilizer rates within 20 to 40 kg, also can burn the leaves inside the cave, burning hole edge, and fill in sand prevention ants, fruit species. It should be brought up the seedling root zone, less injured, and do as you dig planted. The planting depth of Cocos Nucifera seedlings should be based on the fact that the rooting part at the base of the seedlings, which can be completely buried in the soil, so as to achieve "deep planting and shallow soil cultivation", and avoid the soil being scattered into the leaf organs. Cocos nucifera, which is properly planted and deeply planted, has better growth, higher yield and stronger wind resistance than those planted with shallow plants. 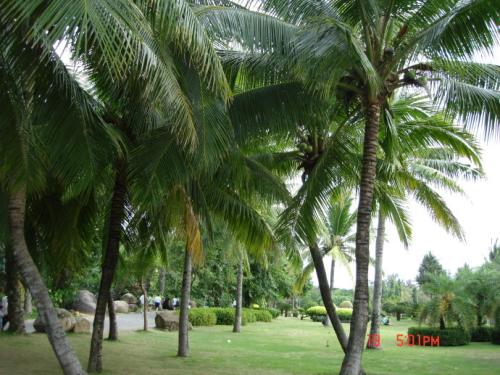 How to care for Cocos Nucifera

Management of Cocos Nucifera should be strengthened after planting. Proper shade should be given in the early stage after planting, water should be irrigated and moisturized, and the missing plant should be replanted in time. Cocos Nucifera was cultivated twice a year, that is, it was cultivated once in November to December combined with fertilization, and again in August to September. As the plant grew up, a large number of aerial roots grew out of the trunk and stem, so as to carry out soil cultivation and strengthen the tree body. Cocos Nucifera plantations can intercrop short-term crops, such as peanuts, beans, etc., play the role of live cover and improve the humidity in the garden, conducive to the growth of young trees.

Cocos nucifera needs to apply whole fertilizer, potash fertilizer is the most, followed by nitrogen, phosphorus and chlorine fertilizer, but must pay attention to balance fertilization. When the coconut palm is short of potassium, the stem is thin, the leaves are short, the middle leaves of the crown wither first, the upper leaves extend downward, the lower part of the leaf is dry, hanging in the trunk.In the absence of nitrogen, the young leaves lost their green and luster, and the old leaves showed different degrees of yellowing, resulting in a decrease in the yield of coconut jerky. Phosphorus deficiency causes poor root development and fruit rot. Chlorine deficiency affects Cocos Nucifera fruit size, dried yield, nitrogen uptake and water use by the plant. Accordingly, we need to give priority to organic fertilizer when fertilizing, fertilizer is auxiliary, apply a few salt. Fertilization can be done in April to May and November to December every year, and fertilization ditch should be opened at 1,5 to 2 meters away from the base of the tree, the effect is better. If the use of broadcasting methods, we should comprehensively weed loose soil before fertilization.

(1) Purgative blood disease: Coconut purgative blood disease is a common disease in coconut producing areas. When it occurs, cracks appear in the stem and dark brown mucus exude, which turns black after drying, and the cracked tissue rots. The prevention methods include cutting the diseased tissue and applying 10% Bordeaux liquid or coal tar.

(2) Red brown elephant: Red brown elephant larva drill column trunk, can make Cocos nucifera dead, prevention and control in the wound with tar or mud seal, serious when cutting and burning, so as not to spread.

(4) The coconut rhinoceros: Coconut rhinoceros mainly two warts rhinoceros against, the worst in leaf unfolds zones, or wave shape incision, kills the growing point, and makes the plants die. For the prevention and treatment,  in March of each year, remove coconut garden outside of the organic matter, composting, dunghill, such as breeding sites, cattle dung or rot of concentrated coconut palm dry to seduce the fecundity of killing. We can also use predators such as soil bees, b. bassiana fungus larva prevention and treatment of rhinoceros.