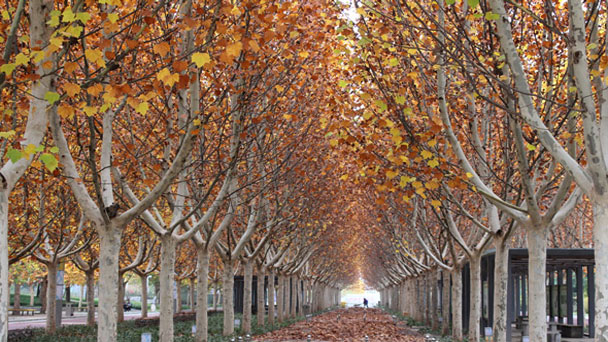 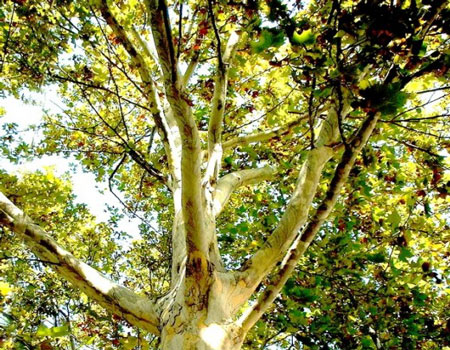 The main character in Handel’s opera Xerxes makes a fool of himself in the opening act, pouring out his love as he sings to a plane tree in the aria “Ombra mai fu,” (“never sweeter was the shade of any dear and lovable plant.”) That may seem a bit excessive, but plane trees do have many fine characteristics to recommend them, including shade and longevity. A tree in the genus Platanus, the London Plane hybrid was most likely a natural result of the two parent trees being planted close to each other; it was first recorded as occurring in Spain in the 17th century where Oriental Plane and American Plane had been planted in proximity to one another. In Oregon, London Plane trees can be found in Salem, Eugene and Corvallis, and dozens of London Planes grow in Portland’s downtown Transit Mall where they provide a cooling canopy for pedestrians. In the 70’s, project engineers originally built root wells in the basements of downtown properties to accommodate them, basements which often extended under the sidewalk. “They're a pretty durable tree,” says Portland State University’s Joe Poracsky, “they're pruned up high, provide good shade and make sense for a pedestrian bus mall. 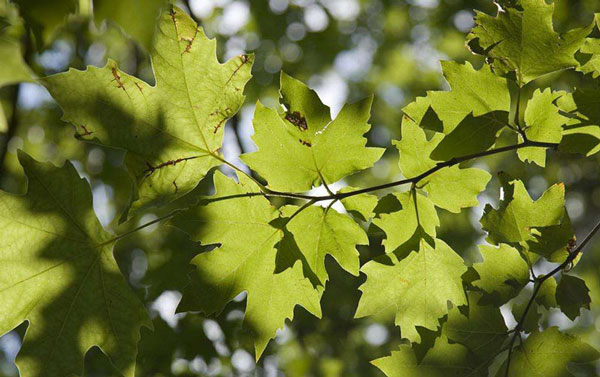 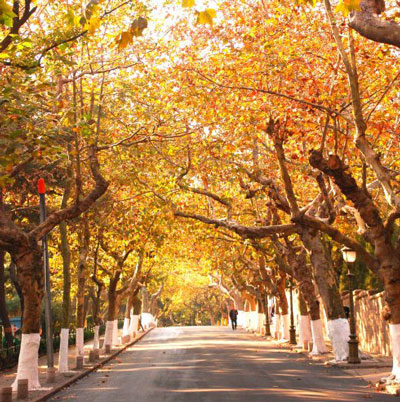 Platanus × acerifolia, commonly called London planetree, is a hybrid cross between American sycamore (P. occidentalis) and Oriental planetree (P. orientalis). The original cross may have occurred as early as the 1640s, after which this tree became widely planted in London and other major European cities because of its perceived tolerance for urban pollution. City planting spread to America where this hybrid today is common in such distant locations as Brooklyn, New York and San Francisco, California. 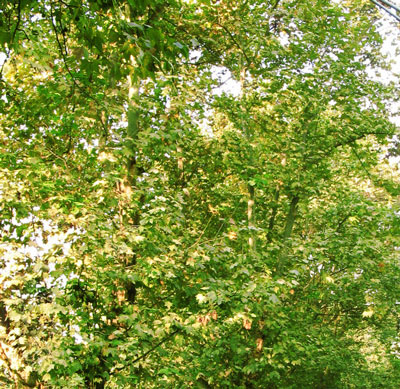 How to Grow and Care for London planetree (Platanus acerifolia hybrida)

London planetrees (Platanus acerifolia hybrida) are usually raised from seed. The seed should be collected from the tree in autumn as it matures, though collection can go on through the winter. It needs no pretreatment other than being kept cool and dry. It should be sown shallowly in the open in spring. While the hybrid planes produce fruits profusely, the percentage of viable seed produced in England is low. Raising the hybrids from seed may theoretically result in the loss of some hybrid vigour. While seed could be raised from the oriental plane, and it produces more good seed than the London plane, it is known that the percentage of good viable seed set in Britain is lower than in warmer climates. London planetrees (Platanus acerifolia hybrida) are generally grown from cuttings. Traditionally hardwood cuttings have been used as the tree is easy to raise by this method and the stock responds well to the annual removal of the cuttings. It is possible that varieties that are easiest to propagate by this method have been selected for. Standard methods include 1) the insertion of hardwood cuttings of well matured tissue about 25cm long in open ground at or after leaf fall, rooting taking place by the spring, 2) the insertion of similar hardwood cuttings in March in frames with bottom heat, rooting taking place within 3 to 4 weeks.
Older hardwood cuttings, including second year and older wood, can also usually be rooted easily. It is common for prunings used as beansticks to root in the open. Cuttings can also be taken with soft new season growth in summer. I have rooted cuttings taken in June and later, in close conditions under polythene covers, overwintered thereafter in sheltered conditions. A study has shown that the highest percentage takes are obtained from basal soft cuttings, taken in July, and rooted under mist.

How to Care for London planetree (Platanus acerifolia hybrida)

Full sun and partial shade are best for this tree, meaning it prefers a minimum of four hours of direct, unfiltered sunlight each day. Although it can adapt to most growing conditions, the London planetree does best in rich, deep, well-draining soil. It grows in loamy, sandy, and clay soil types. And it can handle acidic and alkaline pH levels, as well as some soil compaction. After back filling and lightly compacting the 50/50 mix of existing soil and compost give the London Planetrees a good deep watering. This is not to be rushed. Most of the water you put on the plant at first will run away from the plant until the soil is soaked. London planetrees grow rampantly in moderate climate regions around the world. The tree can be amenable to a particularly hot summer, as long as its soil remains moist. And it can withstand a harsh winter, though it might sustain some cold injuries. Because London planetrees (Platanus acerifolia hybrida) are often grown in areas with poor soil or limited space, they can end up lacking in nutrients. If this is the case, follow the label instructions to feed the trees with tree fertilizer in early spring and fall. London Planetrees that have not been pruned in a few years will often develop dead or degenerative twigs. Removing the dead and dying limbs will minimize the possibility of diseases such as “dieback” and will also allow the plant to re-concentrate its energies and produce flowers. 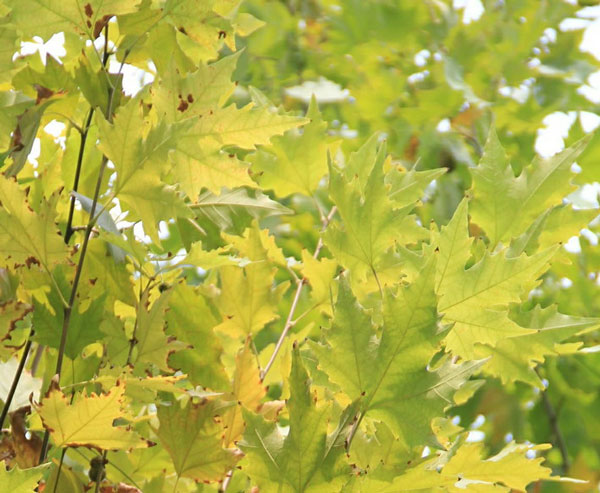 Wildlife Uses
Some bird species including house finches, warblers and Nuttall woodpeckers depend on the high canopy of trees in the Sycamore family for nesting sites, and to forage for insects like aphids. The seedballs found on the London Plane are a favorite of red-tailed hawks, juncos, purple finches, goldfinches and squirrels. Cavity-nesting birds such as flycatchers and owls will sometimes nest inside the nearly hollow trunks of older trees.

The hybridization of the London planetree is thought to have occurred accidentally sometime during the 17th century in either Spain or London when the American sycamore and Oriental planetree were planted close to one another. Since then, several cultivars have been developed.
'Bloodgood' is one of the more popular varieties, growing around 60 feet tall and tolerating undesirable environmental conditions, including drought and poor soil.
'Columbia' sports dark green foliage and grows to roughly 50 feet. It resists mildew and anthracnose and can tolerate heavy pruning.
'Liberty' is a quick-growing variety with a pyramidal shape that reaches around 50 feet. It has a good tolerance for mildew, anthracnose, heat, and drought.
'Metzam' (or 'Metroshade') grows to a strong 70 feet. Another disease-resistant cultivar, its leaves emerge with a reddish cast but quickly become a lustrous green.
'Mirkovec' is a dwarf variety with a shrubby growth habit and unusual lobed leaves with pink, cream, and bronze coloring. 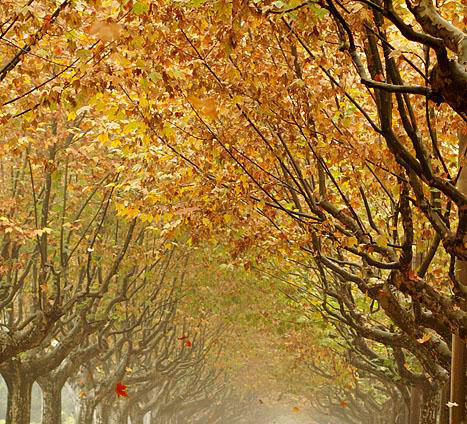 London planetree was originally thought to be much more resistant to sycamore anthracnose than its American parent, however this is no longer entirely clear since anthracnose resistance seems to vary considerably among various hybrid plants. Some reportedly resistant cultivars, such as ‘Columbia’ and ‘Liberty’, are available. Another disease problem of concern is cankerstain which can be fatal. Canker, leaf spot and powdery mildew may also occur. Insect visitors include borers, scale, Japanese beetles, caterpillars and mites. When grown as a lawn tree, litter from twigs, large leaves, bark and fruiting balls can pose significant clean-up problems.

The London Planetree should be paired with low plantings that don’t distract from the exfoliating bark. Consider using Gro-Lo Sumac to provide a different texture and fall color at the base, or use small stature Hostas or Coralbells if you prefer perennials.