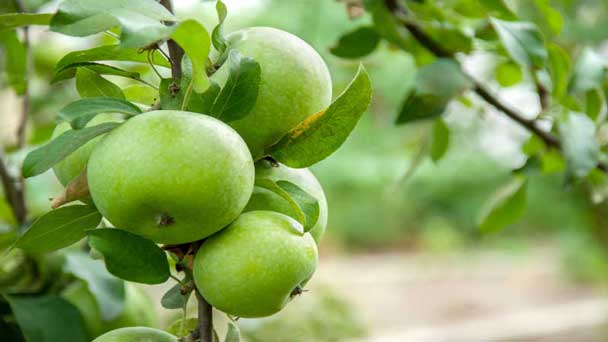 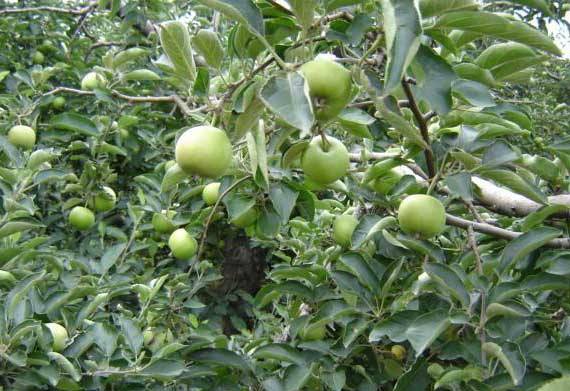 History of the Lodi Apple tree

The Lodi apple tree is a hybrid cross of the ‘Montgomery Sweet’ also known as the ‘Autumn Bough’, and the ‘Yellow Transparent’ apple. Both apples originated at the New York Agricultural Experiment Station. The lodi apple and tree were first introduced to the public in 1924. This tree is mainly grown in the southern part of the United States.
The ‘Yellow Transparent’ is sometimes mistaken for the white transparent apple. Autumn Bough is also known as Montgomery Sweet. The New York Agricultural Experiment Station was renamed Cornell AgriTech, although the official name has not been changed. The Station, as it’s known, is the sixth oldest of its kind in the United States.

Lodi Apple features showy clusters of lightly-scented white flowers with shell pink overtones along the branches in mid spring, which emerge from distinctive pink Flower buds. It has forest green foliage throughout the season. The pointy leaves turn yellow in fall. The fruits are showy yellow apples with hints of light green, which are carried in abundance in late summer. This is a deciduous tree with a more or less rounded form. 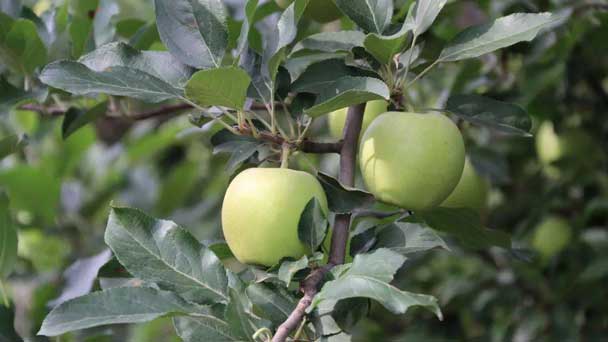 How to Grow and Care for Lodi apple tree (Malus lodi)

Make sure your seeds are dry. If they are store-bought, they should be. If not, dry them out on a paper towel. Wrap the seeds in damp paper towels and then put them in a sealed bag or container. You now need to refrigerate your seeds for 75 days, keeping them around 45 degrees Fahrenheit. You will need to re-spray the seeds every now and then to make sure they stay damp.
By the end of the 75 days, your seeds should be beginning to sprout. In 4-inch deep pots spread a soil mix. Then, make divots in the soil that are 1-2 times the size of the seeds. Add the seeds to the soil and gently cover them. Water until the soil is moist.
Place the pots somewhere where they will get sunlight. Water them frequently, keeping the soil moist. When the plants outgrow their pots you can either move them to bigger pots, and wait for them to outgrow those, or plant them in your desired lodi apple tree tree spots. Cut an end-section with sharp pruning shears from a branch on the upper part of a healthy, mature, dormant Lodi apple tree in winter or early spring before any signs of growth appear on the stems. The cutting should be several inches long.
Stir together one part sand and one part peat and fill a flowerpot with this mixture. Another growing medium mixture is one part peat, one part perlite and two parts sand.
Remove buds and leaves from the lower half of the cutting from the Lodi apple tree. Pour some rooting hormone into a saucer and dip the cut end in rooting hormone.
Stick the cutting into the growing medium in the flowerpot about halfway and press the medium firmly around the cutting so it stands upright on its own.
Moisten the cutting and growing medium with water from a spray bottle. Cut the bottom from a clean, clear, 2-liter plastic soda bottle. Screw on the cap and set the bottle over the cutting in the flowerpot, creating a mini-greenhouse. Alternatively, set the entire pot inside a clear plastic bag and seal it closed with something such as a twist tie. It is important to keep the bottle or bag from touching the cutting. You can use soil to make sure they don't touch.
Transplant the established cutting to its permanent location in late winter or early spring, keeping the root ball intact. 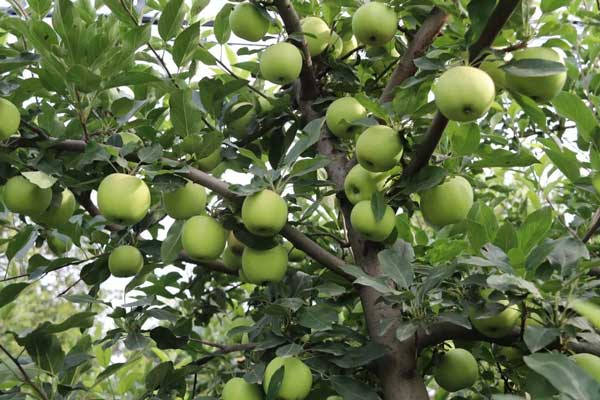 How to Care for Lodi apple tree (Malus lodi)

A Lodi apple tree needs plenty of sunlight to grow to maturity and produce plenty of apples for you and your family to enjoy year after year. When planting lodi apples, be sure to use loamy soil with good drainage. As with most apple trees, the soil pH should be between 6 and 7. You need to water your Lodi apple tree (Malus lodi) regularly while it is establishing strong, healthy roots. Water it 2-3 gallons every two or three weeks for the first few months, then water only once a week during the growing season. The lodi apple tree is considered to be cold hardy, but it will always bear fruit in the summer (typically July). Fertilize your Lodi apple tree (Malus lodi) in early spring with a slow-release fertilizer with a balanced NPK value of 10-10-10. You'll want to prune most Lodi apple trees either late in the winter or early in the spring, so that cuts won't be left unprotected against the coldest winter temperatures. Pruning is important for lodi apple trees because it helps create a basic structure for the tree as well as a sturdy scaffold to support the weight of the heavy fruits. 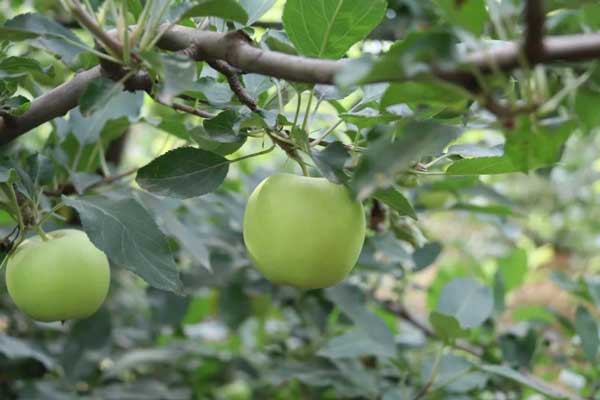 Lodi Apple is a small tree that is commonly grown for its edible qualities. It produces large yellow round apples (which are botanically known as 'pomes') with hints of light green and creamy white flesh which are usually ready for picking from late summer to early fall. The lodi apples have a tart taste and a firm texture.
The Lodi apples are most often used in the following ways:
Cooking
Baking
Sauces

Lodi Apples are eaten by a variety of birds and mammals. The leaves and branches are browsed. The trees can be destroyed by rodents and rabbits girdling the stem or trunk. The nectar and/or pollen provides nutrition for bees in early to late spring.

There are many health benefits of the lodi apple. Health benefits include being a great source of fiber and vitamin C. They also contain vitamin A, phosphorus, iron, and potassium. The lodi apple is known to help with digestion, maintain blood sugar, and improve the immune system. 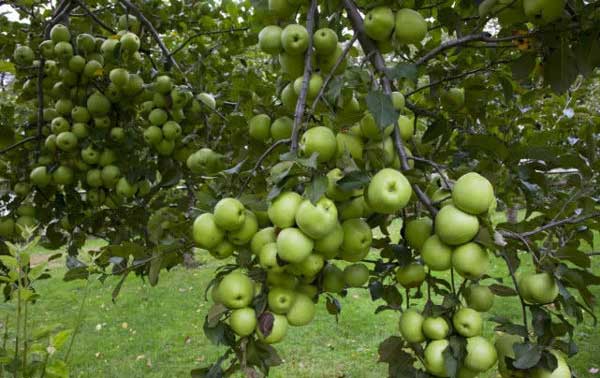 Lodi Apples
These Lodi apple trees produce fruit earlier in the season. They grow to be anywhere from 10-25 feet tall. Lodi Apple Trees are more durable than other apple trees and can handle numerous kinds of soils.
Gravenstein
Gravenstein apples can prosper in numerous zones across the country. This tree is notable for being one of the earliest apple trees to bloom, taking less time to produce fruit. The apples this tree produces are great for cooking. The tree can grow to be 15- 20 feet tall.
Honeycrisp
These delicious apples can grow in numerous climates. This tree is fairly manageable for a backyard, only growing to be about 15 feet tall. Honeycrisps are regularly recognized for being one of the best apples you can buy. The US Apple Association declared them one of the top five most grown apples in America.
Northern Spy
This hardy apple can withstand the cold more than most others. It even keeps its leaves far into the winter, past the first frost. It does, however, require frequent work and pruning which can be challenging since it grows to be about 25 feet tall.
Red Rome
This is one of the fastest-growing apple trees. It can be droopy, and its fruit can be hard, so it is better to eat Red Rome apples cooked instead of raw. This tree is a semi-dwarf apple tree, only growing to be about 10-14 feet tall.
Gala Dwarf
This dwarf tree grows to only be about 8-12 feet tall. You probably have tried Gala apples, they are extremely common in grocery stores, but fresh-grown ones are much sweeter in flavor. These trees are conveniently self-pollinating, so they do not need a companion tree, although a companion tree will help with their fruit quality. This is important because they have poor disease and pest resistance abilities. 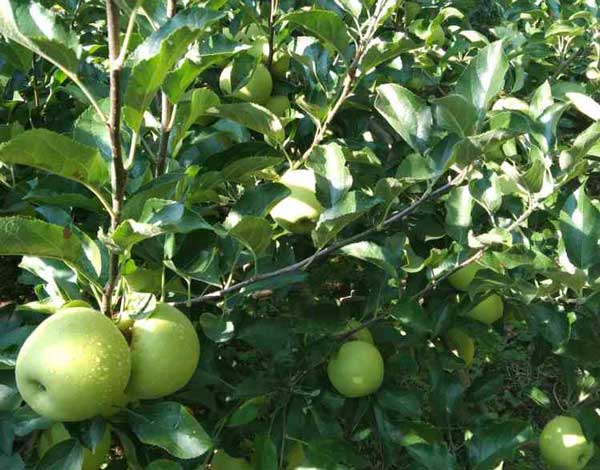 Pests that may bother your Lodi apple tree include aphids, apple maggots, bud moths, and codling moths. Orchard sprays, horticultural oil, or neem oil may help with each of these. Your local cooperative extension agent can also give you guidelines on dealing with the prevalent pests or diseases in your region.
Common apple tree diseases include anthracnose, which is a fungus you can control with a copper fungicide or neem oil. Fire blight is a highly contagious disease that causes the fruit and leaves to look like they've been scorched. There are sprays specifically for fire blight use. You can also keep the tree site clean and free of debris as a preventative measure.
Small animals, such as mice, can nibble on your tree’s trunk in the winter months. Tree guards or a layer of burlap wrapped around the trunk will help prevent this. Deer may be attracted to the fruit. Although there are deer sprays that may inhibit deer, the only sure way to keep them away is to fence in your trees.