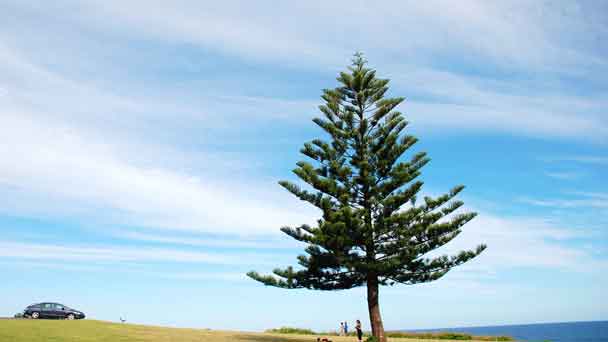 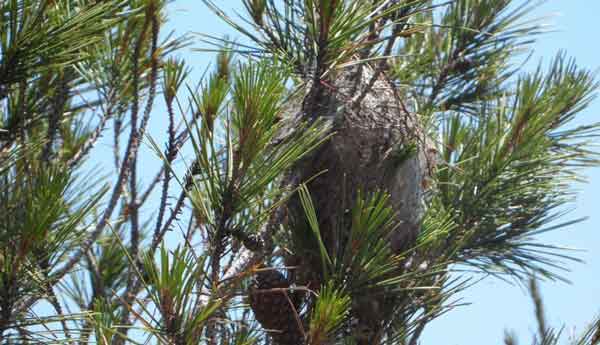 Like most other Mediterranean pines, Aleppo Pine (Pinus halepensis) has been widely planted and its range otherwise manipulated by humans for many centuries, making it difficult or impossible to define precisely the true native range. Forests dominated by Aleppo Pine (Pinus halepensis) comprise about 10% of the shrubland/forest complex in the Mediterranean basin. In conjunction with Pinus brutia, these two pines cover about 6.8 million ha in this region. There has been considerable debate in the literature on whether Aleppo Pine (Pinus halepensis) is native to Israel or whether occurrence there is entirely anthropogenic; with current consensus being that it has been a component of the vegetation in Israel throughout the Pleistocene, but that it was never a dominant species. 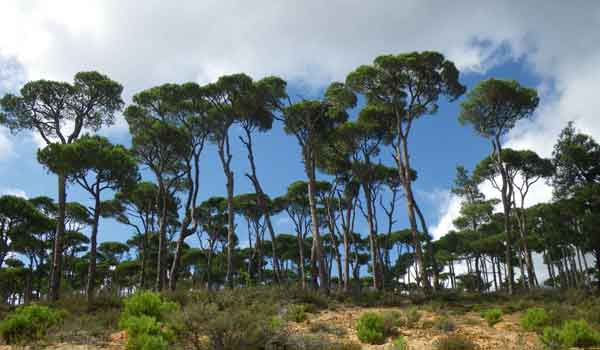 How to Grow and Care for Aleppo Pine (Pinus halepensis)

Place the aleppo pine seeds in a container with room temperature water for two days. Replace the water each day. Add the Aleppo Pine seeds to a bag with peat moss or sand. Moisten the mixture so that it's damp but not wet. Place the bag in your refrigerator. Keep the bag in your refrigerator for 60 to 90 days.
Fill a growing tray with about 2 parts potting soil, 1 part peat moss and 1 part perlite. Dig a hole no larger than the width and depth of the seed. You can typically achieve that by inserting the tip of your finger into the soil. Sow seeds within about 1 inch of each other.
Cover the Aleppo Pine seed lightly with soil. Water so the soil is slightly moist but not wet. Keep the soil at that moisture to promote germination. Place your finger into the soil every 5 or 6 days to ensure it's moist. Keep the tray in light sun.
Pull seedlings that sprout within 3 inches of each other. Once seedlings reach 2 to 3 inches, place each one into its own pot with the same type of soil mixture. Cover only the roots with soil. Taking the right cuttings from Aleppo Pine (Pinus halepensis) is important to successful propagation. Low, lateral branches on younger plants (ideally, those under 5 years old) tend to be a better option, as Aleppo Pine have a better ability to regenerate and put out roots more quickly. Choose Aleppo Pine cuttings that look healthy rather than those that appear to be under stress.
Use sharp hand Shears to take Aleppo Pine cuttings with a slightly angled cut. You want a length of around 6 inches. Remove any side shoots around the lower 2 inches of the cutting. You can also make some small, vertical cuts at the base of the Aleppo Pine cutting. These wounds can help stimulate root growth. Place the Aleppo Pine cutting with the soft growth pointing upward and out of the soil to allow the other end to root.
Wash and dry the base of the cutting away and then dip it in rooting powder. This will help the cutting to grow roots plus minimize the risk of rot. Make a hole in your soil using a pencil or stick; then insert your powdered cutting into the hole.
Any cuttings that have rooted can now be repotted. It's best to move new cuttings to larger, individual pots at this stage, adding some pine fertilizer if you wish. Your pine tree cuttings can live in their pots for a couple of seasons to help better establish the Aleppo Pine plants. You can then transplant your new aleppo pine trees into the ground.

How to Care for Aleppo Pine (Pinus halepensis)

Choose a planting site where Aleppo Pine (Pinus halepensis) receives full sun throughout the day. Because Aleppo pin grows into a tall tree, it shades the areas below it. Aleppo pine can handle a wide range of soil pH levels from acidic to alkaline. Aleppo pine can also grow in a wide range of soils as long as it drains well, although loamy or sandy loam soil best mimics Aleppo pine’s native area. Water Aleppo pine 3 feet deep every three weeks in the winter and once a week or twice weekly in the summer, depending on the climate.
Temperature and Humidity
Aleppo pine trees thrive in warm climates like its native Mediterranean region and is one of the most drought-tolerant of all pines. In the U.S., Aleppo pine is a popular ornamental tree in hot, dry areas such as the Southwest. The Aleppo pine's tolerance for heat and drought and its fast growth are highly valued in these areas. Fertilize twice yearly in the first five years of growth by using a 12-4-8 fertilizer for evergreens and following the manufacturer's instructions. Prune Aleppo pine in order to prevent problems, improve appearance and promote tree growth. Save major pruning for the spring; regular tree maintenance is done whenever necessary. 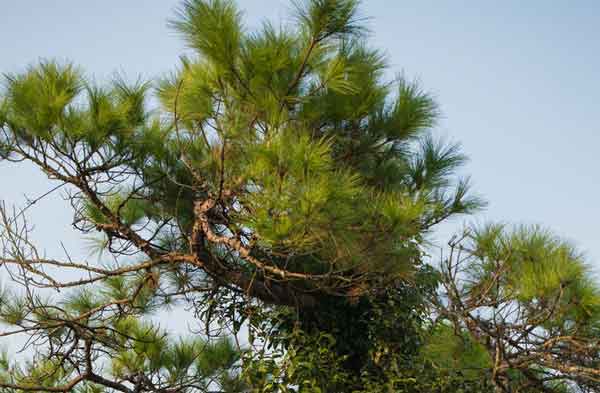 Aleppo Pine (Pinus halepensis) is not a species of major commercial importance, but it is a very important species in its native range, where its main uses are in agroforestry, soil conservation, erosion control, revegetation and land reclamation, and also for Throughout its native and introduced ranges, it has considerable value as an amenity and ornamental tree. It is very widely planted for restoration of degraded sites, especially within its large natural range. Its tolerance of poor, degraded or stony soils makes it very suitable for this purpose. P. pinaster is also used, but Aleppo Pine (Pinus halepensis) is preferred for drier sites, especially on calcareous soils. In parts of the Mediterranean basin, Aleppo Pine (Pinus halepensis) is planted to improve water infiltration rates on hill slopes, for example, on marl limestones near Lorca, south-eastern Spain. Aleppo Pine (Pinus halepensis) is widely grown for a variety of amenity purposes, as windbreaks, shelter belts and shade trees. In the semi-arid parts of South Africa, it is used in community forestry projects (especially in the North Cape Province) to restore degraded areas, and in many temperate regions, Aleppo Pine (Pinus halepensis) is grown as an ornamental tree.
Aleppo pine is not used for commercial forestry anywhere in the world, mainly because of its poor stem form and low-quality timber. Aleppo Pine (Pinus halepensis) yields a yellowish-brown, coarse-grained, resinous, moderately dense wood of poor quality which is sometimes used for rough constructional purposes, in low-grade joinery and boxes, as railway sleepers, telephone poles, mine props, also as a firewood and charcoal.
Formerly, Aleppo Pine (Pinus halepensis) was often tapped for resin, especially in Portugal and Spain, but this is now only performed in some parts of Greece. The bark has been used in tanning leather.
The turpentine obtained from the resin of all pine trees is antiseptic, diuretic, rubefacient and vermifuge. It is a valuable remedy used internally in the treatment of kidney and bladder complaints and is used both internally and as a rub and steam bath in the treatment of rheumatic affections. It is also very beneficial to the respiratory system and so is useful in treating diseases of the mucous membranes and respiratory complaints such as coughs, colds, influenza and TB. Externally it is a very beneficial treatment for a variety of skin complaints, wounds, sores, burns, boils etc and is used in the form of liniment plasters, poultices, herbal steam baths and inhalers. 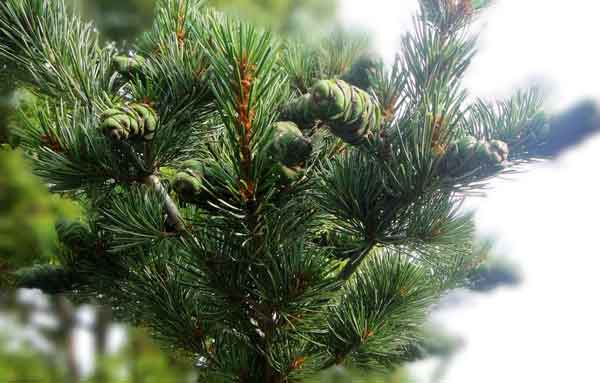 Aleppo pine blight is common in the Phoenix area and might (the evidence is inconclusive) be caused by a pine feeding mite (Oliginychus milleri), which are extremely small, inconspicuous and produce no webbing like the red spider mite. The symptoms of pine feeding mite damage that contribute to aleppo pine blight include the graying and browning of entire large branches which appear to suddenly 'die back' in late fall and winter. Most often the needle foliage of these same branches will return to a normal green color the ensuing spring, though others might die. Or Aleppo pine blight might just be an abiotic heat-induced dieback. In either event, the ultimate cause of this common fall and winter blight in Phoenix is inconclusive.