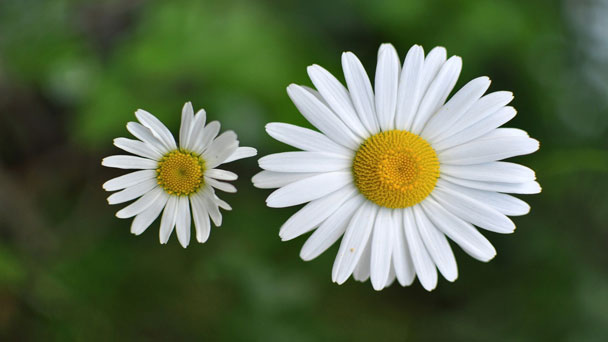 How to Grow Chamomile (Matricaria Recutita)

Chamomile seeds can be started indoors 3-4 weeks before the last frost. When planting chamomile seeds indoors, fill a seed tray with well-draining potting mix, then simply scatter the seeds over the loose soil and lightly tamp it down or water it in with a light mist. Seedlings should be thinned to 2-4 inches (5-10 cm.) apart when they are about an inch (2.5 cm.) tall. Plants do not like to be transplanted once their roots have established and they begin to produce blooms, so many gardeners prefer to sow the seeds directly in the garden. In the garden or as a lawn substitute, chamomile seeds need only be scattered over loose soil and gently tamped down. Germination can occur in temperatures as low as 45-55 F. (7-13 C.) in full sun to part shade.

When grown as a perennial, all species of chamomile propagate reliably from stem cuttings taken in spring. However, the cuttings must be harvested from the base of the stems and include a small amount of subterranean growth to ensure successful rooting. 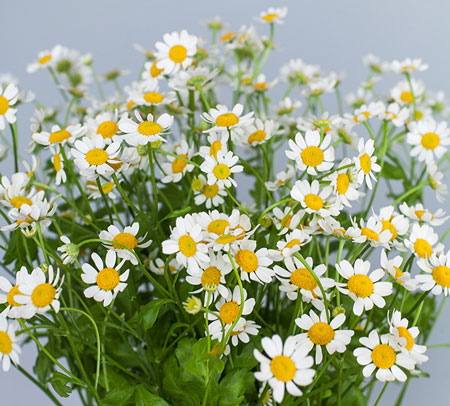 How to Care for Chamomile (Matricaria Recutita)

Both Roman and German chamomile grow well in either full sun or partial shade. The plants will Flower best in full sun, but in hot climates, a bit of partial shade is a better choice (especially during the hot afternoon hours) to avoid burning the delicate blooms. More sun typically leads to faster growth, but as this plant grows rapidly by nature, this may not be an issue.

Before planting chamomile, prepare your garden bed by adding compost or other organic material to the soil, especially if your soil is primarily clay or sand. Chamomile prefers rich soil with a pH ranging from 5.6 to 7.5. To give your chamomile a great start, add aged compost-enriched Miracle-Gro® Performance Organics™ All-Purpose In-Ground Soil to your garden bed. Organic matter like this helps the soil retain moisture while also improving drainage, which is especially important with clay soil.

Check the soil every few days to determine whether you need to water. Once established, they are quite drought tolerant. Water as you would most wildflowers by watering with a slow trickle, through a soaker hose or using a drip watering system.
These plants do best with occasional, deep watering at base level. If you use a sprinkler system, be sure to irrigate early in the morning so that the specimens will have all day to dry out before dark. This helps prevent fungal infection and other diseases.

This easy-to-grow herb doesn't require a lot of fertilizer. In fact, avoid growing chamomile in nitrogen-rich soil or adding fertilizer, which can promote more leaves and fewer blooms.

Although M. chamomilla is relatively carefree and tough, it attracts pests and suffers from diseases like any other plant. However, as with most Plant Diseases and pests, proper care and attention to watering minimizes any of these potential headaches you could encounter.
Aphids can chomp down on chamomile.
Powdery mildew is the most common problem with scented mayweed, but it is a concern only when the weather is hot and damp for prolonged periods of time. Aphids, thrips, and mealybugs can bother M. chamomilla as well, but the plant is generally pest and problem free.
It can even be processed and turned into an effective spray to aid your other garden plants. Make a batch of tea at triple or quadruple strength, allow it to steep overnight, and use it the next day as an herbicide and aid against mildew. 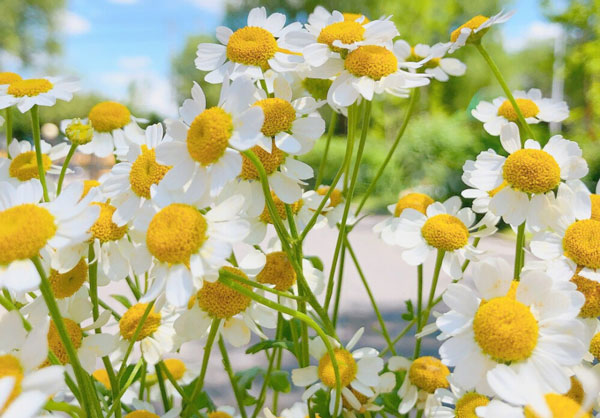 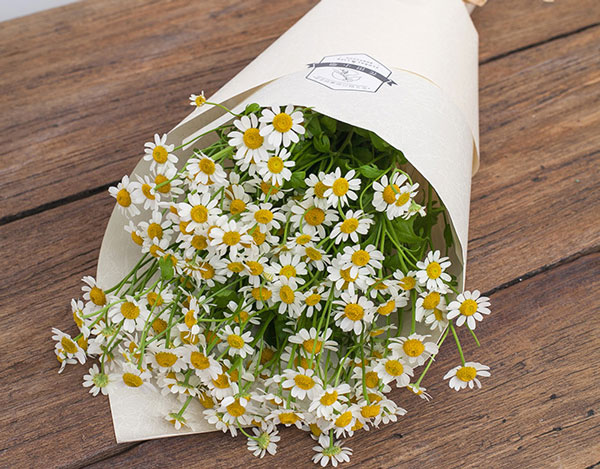 Is Chamomile A Good Container Plant?

It is easy to grow either type of chamomile in containers, and both are fine container plants. Your choice will depend on the results you want. If you want an upright plant go with German chamomile. If you want a cascading plant, Roman is best. For either one, be sure to use a light soil mixture. A Succulent mix is ideal as it allows good air circulation and excellent drainage. Alternately, you can mix regular potting soil with perlite and/or coco coir to create a well-drained soil mixture.
It's best to plant chamomile in a terracotta pot for better aeration and drainage. Check the soil frequently. It should not be allowed to dry out completely; however, you must also guard against over-watering as this causes root rot.

Does chamomile make you sleepy?

Chamomile is particularly effective at making you feel sleepy because of its chemical structure. The plant extract contains apigenin, a chemical compound that induces sleepiness when it binds to the GABA receptors in the brain.

Chamomile: How to grow and care for it