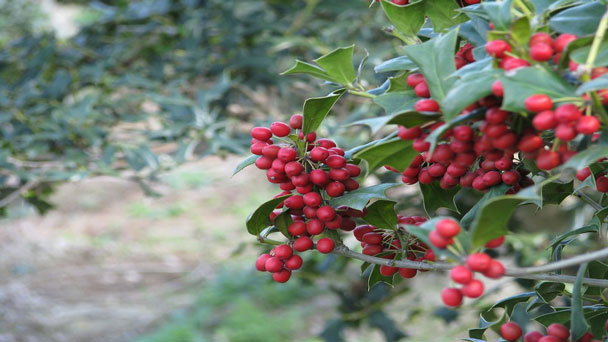 Where to Grow Chinese Holly

Chinese holly (Ilex cornuta) can be grown easily in the sun or part shade in most locations. In colder regions, plant in a sheltered area away from drying winter wind. They thrive in moderately fertile, moist, well-drained soil. Chinese holly root system is not invasive and can safely be grown near the house. 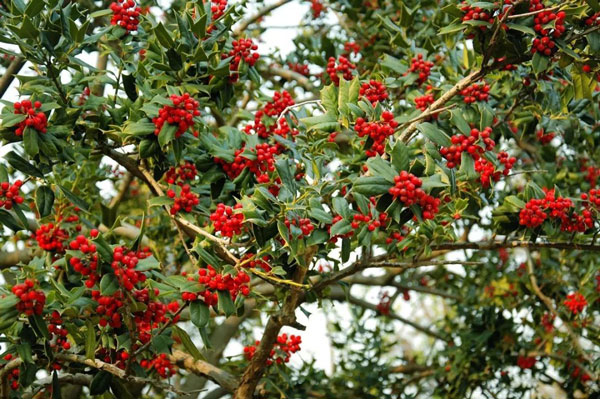 Plant Chinese Holly when it's cool out. Late fall, early winter, or early spring are generally the best times to plant, depending on your climate and the holly variety you'll be planting. 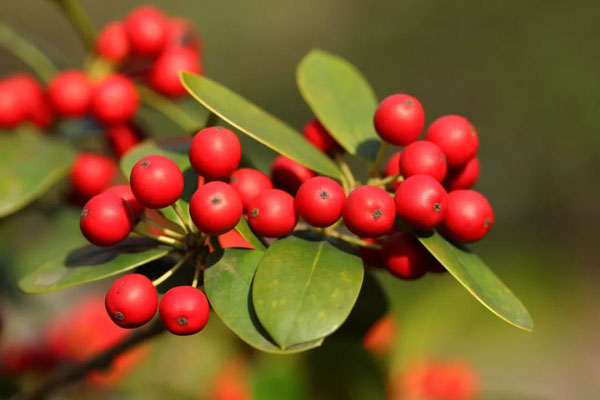 Holly berries ripen in the late autumn, usually in November or December. They sometimes remain on the tree throughout the winter, so could possibly be collected as late as April the following year. Berries are stripped from the trees by hand. The collected chinese holly berries should be separated from any twigs and ‘de-bunched’. They can be left in buckets or baskets for a week or two, provided they are stored in a cool, dry place. Click here to see the simplest way to extract the seed from the fleshy fruit. Ideally the extracted seed should be pre-treated immediately. Mix the seeds with equal parts horticultural sand or a sand/compost mixture. Use 50% leafmould or peat-free compost and 50% horticultural sand. For each handful of seeds add two or three handfuls of mixture. Select a pot that has enough room for this seed/sand mixture (and a bit more) and put a layer of stones in the bottom. Cover the stones with sand. Place the seed/sand mixture on top of this and cover this with 2-3cm sand. Label the pot and stand in a shady spot outdoors.
The pot needs to remain outside for eighteen months. This is where patience is required! Water the pots if they show signs of drying out and protect from birds and mice if they discover your seeds. We will be sowing the Chinese Holly seeds the second spring following collection. Chinese Holly seed has a very hard outer seedcoat that needs a full summer (warm temperatures) to break down, allowing oxygen and water to reach the embryo tree inside. After the seeds have spent a whole summer and the following winter outside, they are ready to be sown (eg. collect December 2017 and sow spring 2019).
Chinese Holly doesn’t like its root to be disturbed once it is growing. For this reason it is best grown in a pot – about 8cm in diameter. Sow each seed as it begins to germinate (when you can see a small root emerging). Sow one per pot. Cover the seed with a little compost and firm gently. Because Chinese Holly is grown in pots, it will be more susceptible to drying out. Ensure that the pots are kept well watered and fed. During the first year in pots, your Chinese Holly seedlings will grow up to 20cm in height. In the autumn of this first year (about September/October) transplant the young trees into 1- or 2-litre pots, taking care not to disturb the roots too much.
If kept well fed, they will reach a size large enough for planting out during the second year. 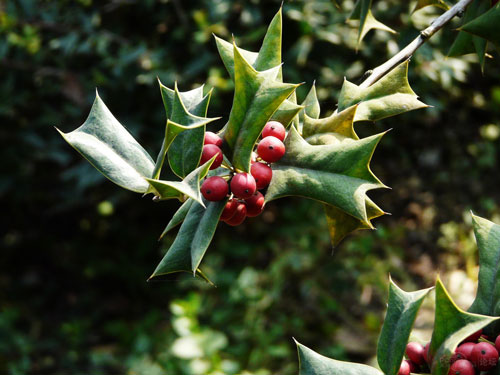 Chinese Holly cuttings are made from canes of new growth that have been removed from the holly bush. Once you have these canes, you can cut them into pieces about six inches (15 cm.) in length. Propagating Chinese Holly should be done while the bush is dormant. If your Chinese Holly is deciduous, this means your cuttings won’t have any leaves on them. Although they have no leaves, you will see bumps on the canes. These are known as bud unions. This is where the following year’s leaves are going to grow from. For evergreen hollies, you will take cuttings when the weather is cold and you should remove all but the top two sets of leaves from the cuttings. The bud union on evergreen hollies will be where the leaves meet the stem. When you are propagating Chinese Holly and removing a piece from the plant itself, you should cut at the bottom just below one of the bud unions. Then, from this piece you will partially cut about three quarters of an inch (2 cm.) above another bud union, which should give you a good 6 inches (15 cm.) of cutting that can be planted. Following this procedure will help you know which is the top end and which is the bottom planting end of the holly cuttings. This also helps because the cuttings are now considered “injured” and an injured plant will develop roots where the callous develops over the injury to the holly bushes. 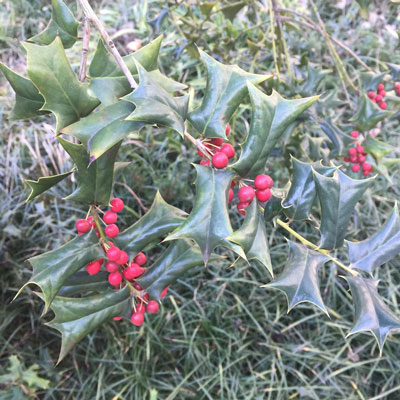 How to Care for Chinese Holly (Ilex cornuta)

Full sunlight is needed for Chinese Holly plants to assume their full potential. Many of these plants will do fine with a little less sunlight, although they may not Flower as heavily or their foliage as vibrant. Areas on the southern and western sides of buildings usually are the sunniest. The only exception is when houses or buildings are so close together, shadows are cast from neighboring properties. Full sun usually means 6 or more hours of direct unobstructed sunlight on a sunny day. Partial sun receives less than 6 hours of sun, but more than 3 hours. Plants able to take full sun in some climates may only be able to tolerate part sun in other climates.

Chinese holly adapt to a wide variety of soil types provided the soil is well-drained. They prefer a moist but well-drained acid to neutral soil of average fertility. As with so many other types of ornamental plants, constantly soggy or wet soil can cause root rot and other harmful plant diseases. So make sure to plant them in a well-drained site. chinese hollies perform and look their best in an acid to neutral soil ranging between 5.0 to 7.0 on the pH scale. Most average garden soils fall between a pH range of 6.0 to 7.0. If your soil is alkaline (above 7) the leaves of your plants might turn a paler shade of green, or even yellow. This can be corrected by applying specific nutrients and minerals as suggested below.

After planting, water Chinese Holly deeply. Add one to two inches of mulch or pine straw atop the fresh soil. Leave room around the base of the plant as putting mulch too close could cause the bark rot. Once Chinese Holly has been planted properly, it is exceptionally beautiful and also very adaptable. The plants crave only occasional deep watering if the weather is extremely dry but generally prove to be both resistant to drought and heat.

Established Chinese Holly trees should be fertilized every 2-3 years. Feed in early spring when plants start growing.
Fertilizers are available in many forms: granulated, slow-release, liquid feeds, organic or synthetic. Determine which application method is best for the situation and select a product designed for trees and shrubs, or go with a nutritionally balanced, general-purpose formula such as 10-10-10.
Always follow the fertilizer package directions for application rates and scheduling. Over-fertilizing Chinese Holly plants or applying at the wrong time during the growing season can result in plant injury.

Chinese hollies can be lightly pruned or sheared almost any time of year. Hard pruning, to rejuvenate an old and tired plant or to reduce the size of a plant that has outgrown the space it was intended to fill, should be performed in late winter before new spring growth begins to emerge. More on that below.
Removal of dead or damaged branches can and should be done when they appear. Cut damaged branches at a point just past the breakage. Cut dead branches off below the dead part or at their origin. Discard these plant parts. Any time of year, a sharp pair of bypass hand pruners can be used to cut back a stray branch that is spoiling the shape of the plant. Make your pruning cut at a point along the branch just above the main form of the plant. As mentioned, Chinese hollies are immensely popular for use as formal hedges or topiary shapes. Sharp hedge clippers or trimmers can be used several times during the growing season to lightly shear plants to desired shape. (Find more fall plants here.)

Holly leaf miner, scale, whitefly, and spider mites are occasional insect pests. Powdery mildew, leaf spot, leaf rot, and tar spot are potential disease problems. However, it is resistant to Phytophthora root rot. Depending on their planting location this shrub can exhibit chlorosis from high pH soils, leaf drop, or leaf scorch. chinese holly plant does spread rapidly and has been listed by USDA as an invasive species in GA. 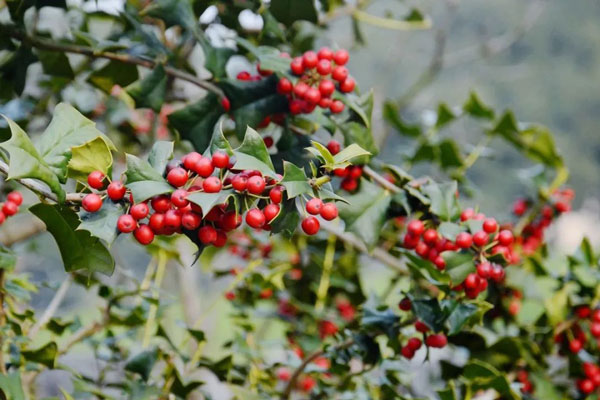 According to the ASPCA, holly is toxic to cats, dogs and horses. Leaves and berries have low toxicity, but vomiting, diarrhea and depression are possible side effects. Note: Chinese Holly berries are poisonous to humans and should be saved for the birds.

Do all holly plants produce berries?

Nearly all holly varieties are dioecious, with male and female flowers occurring on separate plants. This means that female plants, which produce berries, need to be sited near a male pollinator in order to bear fruit. One male is sufficient to pollinate 5 to 20 females, and should be sited within 50 feet of female plants. It’s essential that plants bloom at the same time, so many cultivars are sold as male and female counterparts such as 'Blue Prince' and 'Blue Princess'.
Read Next:
​​​​​​​Top 30 Fall Flowers to Plant - Beautiful Autumn Flowers
30 Fall Plants for a Beautiful Fall Garden