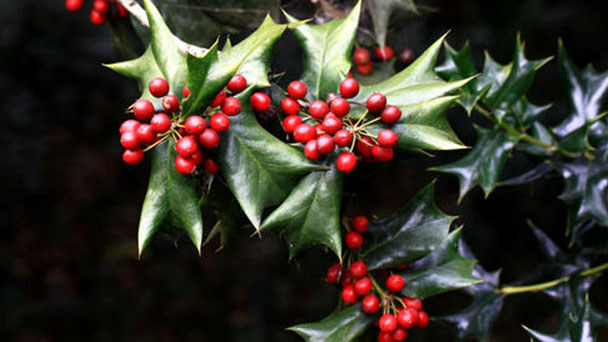 Chinese Holly (scientific name: Ilex Cornuta), also known as the horned holly, is an evergreen shrub or small tree. Its leaves are peculiar, green and bright, evergreen all the year round. 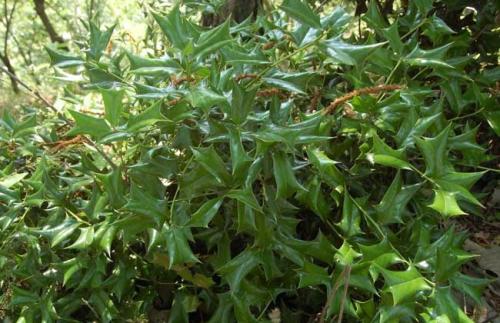 Chinese Holly leaves are thickly leathery, type 2, four corners oblong or ovate, 4 ~ 9 cm long, 2 ~ 4 cm wide, apex with 3 hard teeth, the tooth often of inflection, base rounded or nearly cross-sectional shape, with 1 ~ 2 spines on each side of tooth, sometimes entire (this situation is often appear in the ovate leaves), abaxially dark green, glossy, back light green, matt, two sides glabrous, main veins on the concave, the bulge on the back, lateral veins 5 or 6 pairs, near a leaf margin net knot, the leaf is not obvious, at the back bulge, stockwork two sides is not obvious; Petiole of chinese holly is 4 -- 8 mm long, upper mask narrowly furrow, puberulent; Stipules are callose, broadly triangular.

Fruit of Chinese Holly is globose, 8 -- 10 mm in diam., bright red at maturity, base with tetragonal persistent calyx, tip with persistent stigma discoid, obviously 4-lobed; Fruit pedicel is 8 -- 14 mm long. Chinese Holly has 4 nucleus, contour ovate or elliptic, 7~8 mm long, about 5 mm wide back, with wrinkles and wrinkle-like perforations, a longitudinal groove in the middle of the back, endocarp bony.

Chinese Holly was born in thickets, open forests, roadside, streams and villages on hillsides and hills 150-1900m above sea level.

Chinese Holly drought resistance, every winter into the base fertilizer, like fertile acid soil, not salt and alkali resistance. Chinese Holly has cold resistance, the Yangtze River basin can be exposed to winter, and can withstand the short -5℃ low temperature. Chinese Holly is pleasant to sunshine, can also withstand shade, appropriate to put in the shade of the environment growth. Summer needs to be under shade shed or forest shade maintenance.In winter, people need to live in a room.

How to Care for Chinese Holly

The growth period of Chinese Holly needs to be frequently watered, generally need to keep the basin soil moist, not water, summer often needs to spray water to the foliage, for evaporation and cooling.

Chinese Holly has strong germination ability and is very resistant to pruning. For the works of landscape, unnecessary long branches, germination branches and redundant buds can be cut off at ordinary times to maintain a certain tree shape. For the processing of trees, according to the need to retain a certain branch, for the benefit of processing modeling.

Chinese Holly is usually turned every two to three years, usually in spring, and can also be in the autumn after the trees into the dormant period. When turning over the basin, you can repair part of the old roots, apply sufficient base fertilizer, retain 1/2 of the old soil, and re - basin. 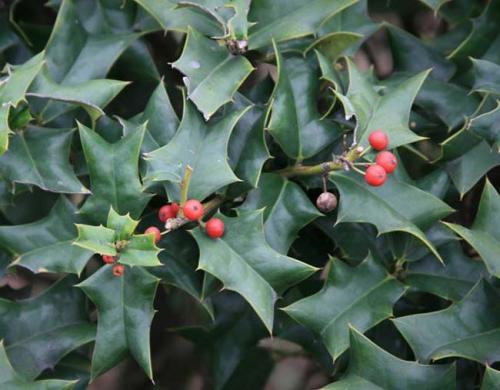 According to the ASPCA, Chinese Holly is toxic to cats, dogs and horses. Leaves and berries have low toxicity, but vomiting, diarrhea and depression are possible side effects. Note: Chinese Holly berries are poisonous to humans and should be saved for the birds.

How to grow Chinese Holly in containers

Chinese Holly appreciates moist, well-drained soil when planted in the ground or a pot. Take extra care to maintain a moist, not soggy, environment in containers. Drainage holes and high-quality potting mix will provide an ideal beginning for this holly. Choose a rather large pot at least eight inches wider than the root ball. This will give the plant room to grow for the next two to three years before upgrading to a bigger container.

Mature plants may live to 80 years of age, and they earn a life well-lived. While welcoming the bees in spring and summer, the birds in autumn, and guests to a holiday dinner table, the Chinese Holly is an evergreen for all seasons.

How to Propagate Chinese Holly

Chinese Holly is mainly propagated by cutting. Cutting shoots in the plum rain season, the survival rate is higher.

Chinese Holly likes the acidic and fertile soil with sufficient sunshine, warm climate and good drainage, which has poor cold resistance and slow growth. Therefore, it needs more phosphate fertilizer to produce dense fruit and fresh color. The fruit of Chinese Holly is very attractive for birds to peck at, so it should be covered and protected during the fruit period, and the pot should be moved to a shaded place in summer.

Chinese Holly is propagated by sowing method and cutting method. Due to its hard seed coat and dormancy of seed embryo, mature seeds picked in autumn need to be stored under wet and low temperature conditions until sowing in the next spring.

Chinese Holly has luxuriant foliage and peculiar leaf shape. Especially after autumn, red fruits are numerous and bright and beautiful. It is a good Flower variety for viewing leaves and fruits.

Chinese Holly few pests and diseases, and sometimes in the wood lice caused by coal stain disease, can be in the plum rain season before 4 to 5 months, every 10 days to spray a Bordeaux liquid or sulfur mixture. Or in early spring spray 50% diego emulsion 2000 times liquid, poison overwintering psyllid, once a week, three times in a row can prevent psyllid harm.

Chinese Holly is produced in Jiangsu, Shanghai, Anhui, Zhejiang, Jiangxi, Hubei, Hunan and other provinces and regions, Yunnan Kunming and other city gardens are cultivated, some European and American national botanical gardens are also cultivated.

Chinese Holly can be found in many cities and counties in Anqing, Nanjing, Zhenjiang, Changzhou, Wuxi, Suzhou, Shanghai, Zhejiang and Guizhou. It is born in the bushes on the slopes and valleys. Now all over the Garden is often cultivated; Chinese Holly distributes in the middle and lower reaches of the Yangtze River provinces.

Leaves of Chinese Holly contain saponins, tannins, bitters, etc. Bark contains alkaloids and so on. The leaves, fruits, and roots are used for medicinal purposes. The leaves can treat tuberculosis, hot flashes and hemoptysis. The fruits are often used for leucorrhea and chronic diarrhea. Branches, leaves, bark and fruit are tonic and strong;Its roots, branches, leaves and fruits are used in medicine. The roots of Chinese Holly have the functions of nourishing and strengthening, activating collaterals, clearing wind and heat and removing wind and dampness. Branches and leaves are used for cough, exhaustion, blood loss, waist and knee weakness, rheumatism arthralgia; The fruit is used for Yin deficiency body heat, drenching turbidity, collapse belt, muscle and bone pain and other diseases.

Chinese Holly has beautiful tree shape and red fruit in autumn and winter, which is hung on the branches, which is similar to the European Christmas tree Ilex aquifolium L.It can be comparable to and substitute for garden viewing.

Chinese Holly has dense branches and leaves, peculiar leaf shape, dark green and bright, red fruits are numerous in autumn, and do not wither in winter. It is bright and beautiful, and it is a good species for viewing leaves and fruit trees. Chinese Holly is suitable for base planting and rock garden material, also can be planted alone in the center of the flower bed, in front of the yard, the intersection, or on the edge of the lawn. At the same time it is a very good hedge (both fruit hedge, thorn hedge effect) and potted material, the selection of the old pile to make potted landscape is also interesting. Fruit branches can be used in bottles for a long time. 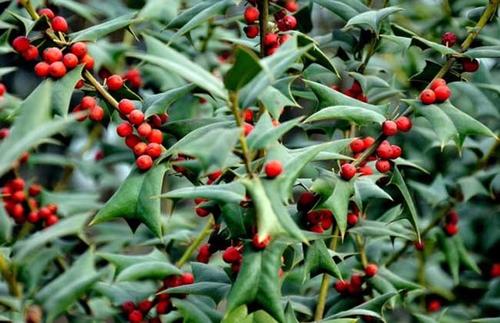