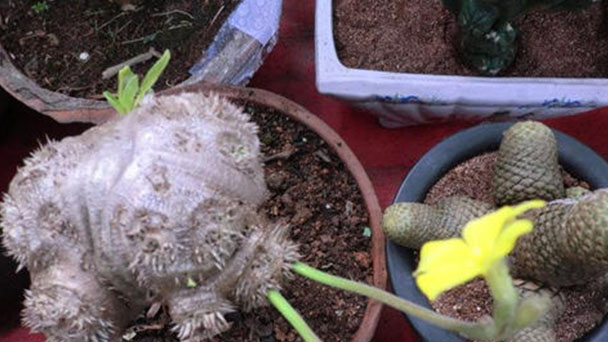 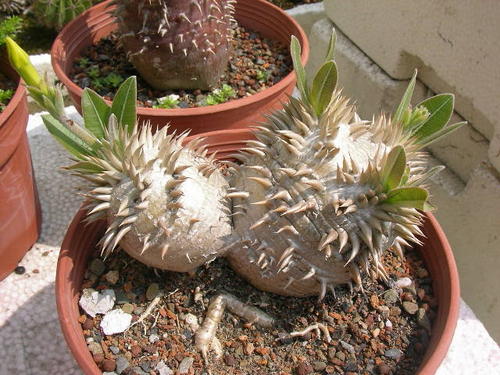 Pachypodium Brevicaule has no obvious stem. It is a fleshy block (commonly known as a "root tuber") that starts out as a potato and grows into a flat, irregular ginger-like plant, up to 60 cm in diameter. pachypodium brevicaule has grayish to grayish, prickly skin. The spines of the young plants are concentrated at the top of the tuberous stem, while the spines of the old plants are concentrated only around the leaves, and even have some lichen symbiosis in their origin. Leaves several, clustered at the tip of the tuberous stem, leaves green, broadly lanceolate (lanceolate: leaves are wider than linear, from the lower part to the apex gradually narrow, called lanceolate leaves, the length of the leaves is three or four times the width, such as willow, peach leaves), 2~3 cm long, entire, with white green veins. The flowers are drawn from the leaves, 2 to 3, funnel-shaped, 5 petals, bright lemon yellow, beautiful and dreamy. The pods are elongated, raised high and often grow in pairs, like antennas or the corners of an animal's chair.

Pachypodium Brevicaule is a perennial herb, native to Africa in the southwest of the island of Madagascar has Pachypodium this belongs to the unique flat plastic tuber, it can reach more than 60 centimeters in diameter, childhood like potato and taro shape, when growing longer, tuber will gradually grow up to become like flat, ginger tuber skin is light brown to silver; The tubers have thorns, the young Pachypodium Brevicaule’s thorns longer than the top of the stem, long and more, and the old plant’s thorns, only concentrated around the leaves, even some lichen symbiosis in the origin; The leaves are bright green, elliptic, about 2~3 cm long, and grow in clusters from stalk-like traces. From the center of the leaves will appear two or three funnel-shaped flowers, the color is bright lemon yellow, 5 petals, quite beautiful and dreamlike.

Pachypodium brevicaule is native to the southwest of Madagascar. It grows at an altitude of 1300~1900 m. It likes warm, wet, dry and sunny environments.

Pachypodium Brevicaule is propagated mainly by seeding and grafting.

The seed life of Pachypodium Brevicaule is short and can be sown immediately after harvest. The suitable temperature for germination was 22°C -- 24°C, and germinated 15-20 days after sowing.

It is advisable to carry out in spring. For rootstocks, we use the same genera as the African king tree (Malagasy palm), the stick tree, the sky horse, the ya-a phase, etc. Using the flat graft method, succulent Pachypodium Brevicaule tubers are cut and tightly bound against the stock. Untie them until they heal and survive.

Propagation of Pachypodium Brevicaule is done by seeding. Podium pods are usually summer and fall ripe, seeds are taken out and ready to be sown. Medium can be fine sand or vermiculite mixed with a small amount of foliage soil, it is best to pass high-temperature disinfection, in order to kill the soil pests, insect eggs and other harmful organisms. After sowing, cover the seeds with a thin layer of soil and keep them moist. After 10 to 15 days, the seeds of Pachypodium Brevicaule germinate. The clumpy stems of the young seedlings grow slowly and must be carefully managed to avoid rot. Transplant seedlings when the seedlings grow to 4-6 leaves. In order to speed up the growth speed, make its flowering, can also be used grafting method breeding, queen overlord tree rootstock available Africa, Brazil, looks like the white horse, a robust Apocynaceae, rod hammer is a meaty plant tree, scion available Pachypodium Brevicaule west, can also be removed to grow strong, block with body-to keep stems as a scion, the flush method for grafting in the growing season. The plant after grafting is put in the light is bright, do not have direct sunlight place to conserve again, do not make rain drenching, water also cannot make the cut when watering, lest rot. It should be noted that grafted Pachypodium Brevicaule, although growing faster, is less valuable for both ornamental and collectible use than plants grown from live plants. Therefore, the grafted plants are often cultivated as the mother plants of the harvested seeds.

Some skilled gardeners say that Pachypodium Brevicaule can live to tell the tale in the freezing night time with minimal watering and sturdy sufficient light. If you see the leaves turning yellow, reduce down on watering. The minimal temperature in which the Pachypodium Brevicaule survives is 55°F. Therefore, make positive to maintain your placing plant in such temperature if you prefer to see it develop healthful and happy.

When it comes to watering the Pachypodium Brevicaule, you will have to water the plant thoroughly. But you will have to do that when you sense the soil is dry to touch. Water the plant and let it drain completely. Make certain to decrease the quantity of water when you note this lovely and hanging Pachypodium Brevicaule is dropping its leaves. At this point, your plant will go dormant.

Pachypodium Brevicaule will want vibrant mild growth. Remember that these Succulents do not now like to stay in darkish and shady locations. If you vicinity it in such a spot, your plant will probably die soon. However, if you are maintaining your Pachypodium Brevicaule indoors, make it positive to hold it at a spot that has a southwest-facing window. 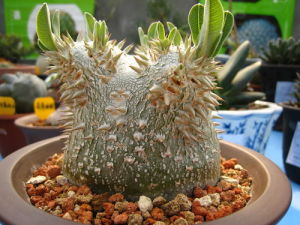 Pachypodium Brevicaule sometimes suffers from root rot, often caused by wet eating by underground pests. Underground pests can be killed by pyropasteurization or chemicals such as carbofuran before planting. Another whitefly, red spider harm, can be symptomatic control.

They are related ornamental plants

Stem clavate, base expanded, stem epidermis silvery-white, leaves clustered at the apex of the stem, as umbellate, flowers white or reddish, petals with red stripes in the center.

Pachypodium Brevicaule is native to the southwest of Madagascar and is found in Angola, Namibia and southern Africa.

Pachypodium Brevicaule has large, oddly shaped roots, green leaves, and beautiful, colorful flowers. It's a good place to be potted or placed in the desert botanical section of a botanical garden. Pachypodium Brevicaule is one of the representative species of the genus lepsaurus in the oleander family. It is a very rare and famous variety of succulent plants and is collected by enthusiasts at home and abroad. 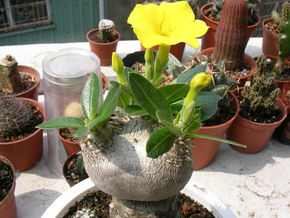