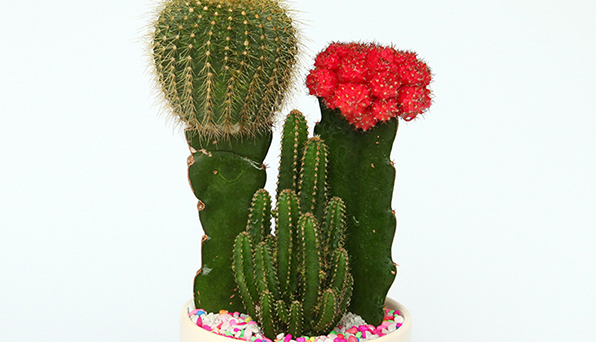 Cactus is a plant and the national flower of Mexico. It belongs to a family of desert plants of the order Dianthus. In order to adapt to the water-deficient climate of the desert, the leaves evolved into short thorns to reduce water evaporation and can also be used as a weapon to prevent animals from swallowing. The stems evolved into a plump and watery shape. At the same time, it grew to cover a very large area The roots of Cactaceae are used to absorb the most rainwater during heavy rain. There are currently nearly 2,000 species of plants in the cactus family. 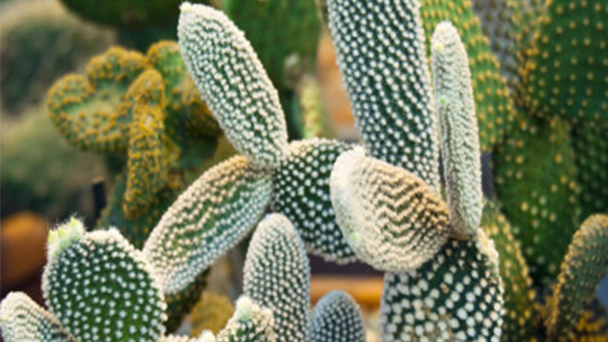 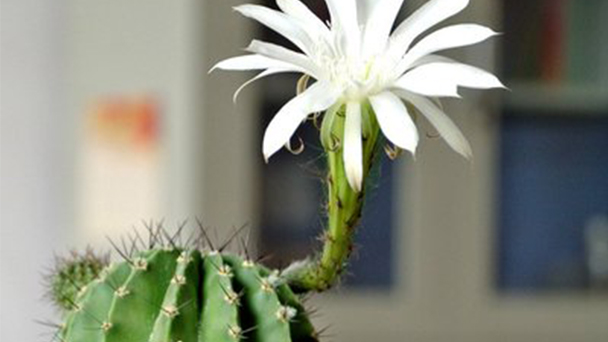 Clusters of succulent shrubs, 1.5-3 meters high. The upper branch is broadly obovate, obovate-elliptic or nearly round, green to blue-green, without hair; thorns yellow, with light brown horizontal stripes, hard; barbs upright. Leaf diamond-shaped, green, early fall. The flower is radial. The receptacle is obovate, the base is gradually narrow, green; the calyx-like perianth is yellow with green ribs; the filaments are light yellow. The anthers are yellow; the style is light yellow; the stigma is yellow and white. The berries are obovoid, with a sunken tip, smooth and hairless, purple-red, barbed bristles and diamond-shaped spines. The seeds are mostly oblate, with slightly irregular edges, hairless and light yellowish brown. Flowering period is 6-10 (12) months.

Most cacti grow in arid environments. Some are columnar, more than 10 meters high, weighing about two to three kilograms, and stand majestically. Some prickly pears with thorns have a life span of more than five hundred years, and they can grow into giant balls two to three meters in diameter.
Cactus plants also have a special ability. In the dry season, they can enter a dormant state without eating or drinking, and minimize the consumption of nutrients and water in the body.
When the rainy season comes, they are very sensitive, and the root system immediately becomes active and absorbs a lot of water, so that the plants grow quickly and blossom and bear fruit quickly. The roots of some cactus plants become carrot-shaped, which can store 70 or 80 catties of water.
Someone once put a prickly pear in a dry paper bag for more than two years. Although it was a little shrunk, it was poured into a pot. After watering, it quickly grew new roots and resumed growth.

The cactus family is native to North and South America, from British Columbia and Alberta to most of the south, and its southern boundary reaches Chile and Argentina. Mexico has the largest variety of cacti. Only rhipsalis may be native to the Old World, distributed in East Africa, Madagascar and Sri Lanka. Cactus flowers are native to South America and the North American continent, from Ontario, Canada at 50 degrees north latitude to Santa Cruz, Argentina at 50 degrees south latitude.

Cactus berries are sweet and sour and edible.Cactus fruit is fragrant and sweet, tender and juicy. It is usually fresh food; Mexico and other places also use fresh fruit to be processed into cans or alcoholic beverages. You can also add honey, milk and ice cubes to make juice, and make ice cream with a better flavor. .

The succulent stems of cacti contain a large number of comprehensive nutrients and trace elements, which are much higher than other crops. Therefore, in many arid areas of Mexico, cacti for feed are grown in patches as the only source of feed for livestock. Cactus is fed with other feedstuffs for cattle, sheep, pigs and other livestock. It is not necessary to feed water separately throughout the year, and the feeding effect is very good.

You can select better stem nodes for cuttings from harmless and robust cacti.
1. The cutting time of most cactus is from May to June. The soil for planting cactus should be breathable, good drainage, and lime-containing sand. Cactus can resist drought, but it must not accumulate water and keep moist soil.
2. Do not water the newly planted cactus immediately, it is best to start watering after a few days. Watering should be less than more.
3. The planting temperature in the room should be suitable, avoid direct sunlight in high temperature in summer, and move cacti indoors in winter.
4. At ordinary times, try to put the cactus outdoors to absorb the light, which is more conducive to its growth. The root system of cactus flowers is developed, increasing and aging, and also secretes an organic acid that acidifies the soil. It is necessary to change pots and add new cultivation soil 1-2 times a year.
The pot change time should be in the dormant period, and it can be changed in early spring in March or autumn in October. When changing pots, the old roots of the plant should be cut off, and the long roots should be cut short to promote new roots.

How does cactus scale insect eradicate

How to grow cactus in autumn

How to grow Cactus in winter