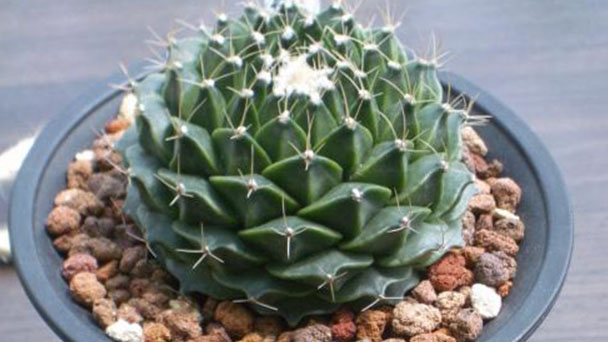 Obregonia denegrii, also known as artichoke cactus, named in honor of Alvaro Obregon (1880-1928), is a rare species of cactus native to Mexico. Its warts are arranged in geometric patterns, making it a rare gem of cactus and one of the representative species of cactus. 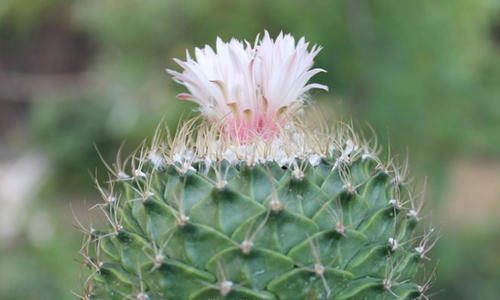 Obregonia denegrii is a solitary plant of small species, which is a well-known hard representative species of cactus.

Obregonia denegrii is oblate and globose, with corms up to 15 -- 20 cm in diameter. The stems contain a variety of alkaloids, and extracts from them have been shown to have antibacterial activity.

Obregonia denegrii has thick fleshy conical roots; Taproots are obvious, deep into the soil, generally 1 to 5 taproots; Lateral root system is dense, very developed, in the country of origin of the wild plants often only rely on the root system on the side of the long even down in the crevices. Gray green triangular leaflike verrucosa spirally arranged in a rosette in the stem, with a keel process on the back of the verrucosa. The base of the wart 1.5 ~ 2.5cm wide, 1 ~ 1.5cm long, hard flesh, spines on the top of the wart process, the new spines have short wool, the general spines have 2 ~ 4, the spines are small, 1 ~ 1.5cm long, the spines are fine needle-like slightly curved, yellow and white, caducous. The spines of older obregonia denegrii are more likely to fall off, and the verrucous projections under the sphere are also more likely to wither or fall off, forming bark-like wrinkles.

The ecological environment of Obregonia denegrii is the same as that of the genus Paeonia. It is difficult to plant Obregonia denegrii. Because of its thick root and well-developed root system, it should be planted in a deep pot. The pot soil should be made of red jade soil, coarse sand, broken brick and a small amount of bone meal. Pelvic floor multi - tile, conducive to drainage. Obregonia denegrii is an extremely slow growing plant. The young plants (4 years old and under 4 years old) grow even more slowly, and it usually takes 3 or more years of normal growth before they show significant signs of growth. Adult plants generally last about 3-5 years for 1 time, the basin should not be too large. Growing periods can be sufficient watering, and need sufficient sunshine. Obregonia denegrii has poor adaptability, and water accumulation in the soil should be avoided, otherwise it is easy to rot. Fertilizer once a month. The temperature in the daytime is 24-29 ℃, and the temperature in the evening is 16-18 ℃. It is required to be cool in winter, but not lower than 5℃. The soil in the basin should be kept dry, otherwise it is easy to rot in the low temperature and wet environment.

It is illumination is sufficient but not direct insolation, the wart after preventing insolation becomes dark red brown, excessive dry shrink and stops to grow, still gives birth to red spider easily sometimes. The second is to avoid shade. In the home planting environment, Obregonia denegrii should be planted in a place with better light as far as possible, so as to prevent the ball from being steep and the wart mutation from being small. Third, it is not wet. Obregonia denegrii planted in closed glass tanks and cabinets should be opened frequently for ventilation to prevent premature shedding of burr and rust spots under the sphere. In particular, it is necessary to prevent root rot caused by freezing in winter and stupefied tanks in summer. In short, Obregonia denegrii prefers light to direct sunlight; Obregonia denegrii (artichoke cactus) likes dry but not too dry, afraid of wet and can not wet; Obregonia denegrii has cold resistance and can not be frozen, and the growth is very slow, cactus is one of the most difficult plant varieties.

Water: Use water sparingly from March till October and keep perfectly dry in winter. 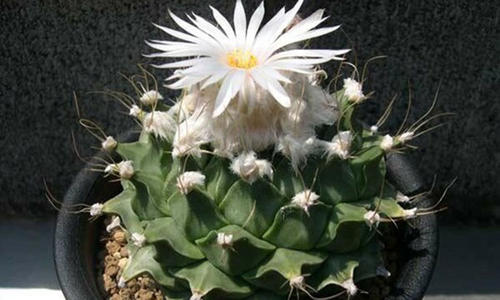 Obregonia denegrii is difficult to propagate and is often propagated by sowing and grafting.

It is best to plant in spring in an indoor pot, and the room temperature should be controlled at 22-24 ℃. Germinate 7-8 days after sowing, but the seedling growth is slower than the adult plant, and the seed setting rate of the mother plant is very low, so cross-pollination is necessary, and it is difficult to seed in general. Early ripe for a long, ripe fruit, there are more than half are not or not success of fertilization, so the Obregonia denegrii seed germination rate is very low, in the first year after seed germination mortality rate is very high, the reason is Obregonia denegrii less adaptable than adult plant seedlings, planting the taken (e.g., too dry or too wet), young plants will die, so Obregonia denegrii west is extremely rare; Under normal growth conditions, the diameter of the 2-year-old seedling will reach 3-5 mm. After the fifth year, the resistance of the plant will be enhanced and the growth speed will be faster, so the management is relatively easy. It takes about 8 to 10 years from sowing to first flowering.

Generally, Obregonia denegrii (artichoke cactus) grafting is carried out in summer. Rootstock is best to use the diameter and grass bulb, and scion is to use the seed bulb of the adult plants of Obregonia denegrii. Because the meat of Obregonia denegrii is hard and dry, the operation is fast. Obregonia denegrii grafting mortality rate is very high, high humidity of the air, after grafting survival rate can be improved, but the injury death or sphere once the stock is too big need to fall to the ground, the ground of the scion is extremely difficult to take root, even daily strict management, also need 3 years to hair root, once the scion management oversight will die, so general shortly after landing a scion will be unable to take root and stem dead or too much moisture and decay, and so the grafting reproduction is not recommended.

Obregonia denegrii is a disease of anthrax and root rot and can be sprayed with 65% Dexin Zinc WP 600 times.

The main pest of Obregonia denegrii was red spider, which was sprayed with 25% chlorphenidine water 1000 times liquid.Usually due to attention to ventilation, so as not to affect the appearance of the ball long rust spots.

Obregonia denegrii (artichoke cactus) is one of the world's recognized first-class protected plants and has been listed on the Red List of Endangered Plants and on the Convention on International Trade in Endangered Species of Wild Fauna and Flora (CITES).

Obregonia Denegrii is native to the mountainous area near the city of Victoria in Tamaulipas, northeastern Mexico, North America. The area is sunny and open, and the soil is mainly arid and barren limestone and gravel with excellent air permeability. Obregonia denegrii grows very slowly and is endangered in its native place.

Obregonia denegrii is a solitary plant, belonging to a small species, with thick roots, abnormal stems like gyroscopes, triangular, hard, geometric and orderly nodules. It is very special, and is the representative species of cactus plants. Obregonia denegrii (artichoke cactus) is a rare cactus gem that can be used as a knick-knack for window sills, desks and desks. 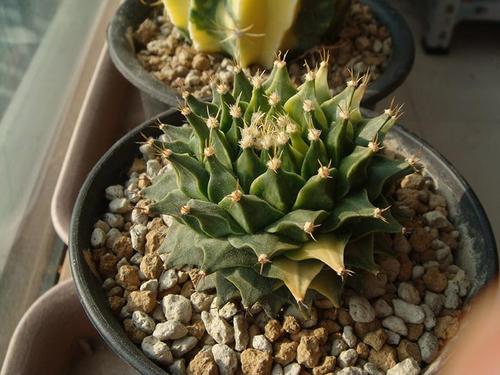