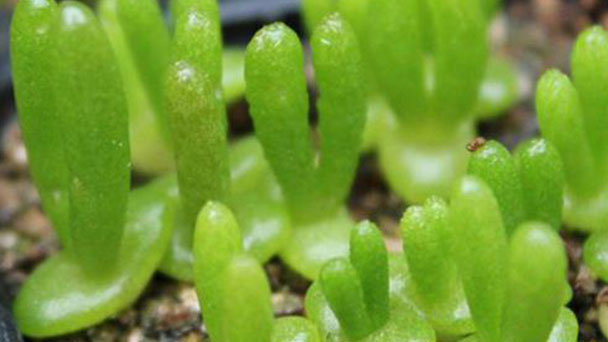 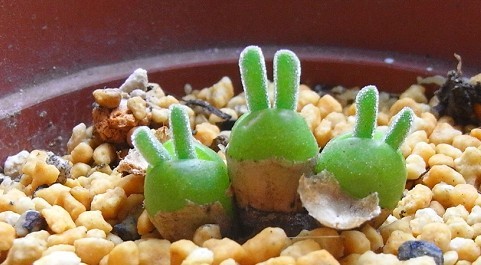 Monilaria Obconica is a Succulent perennial herb or subshrub, easily herbaceous. The Flower is generally white, the fruit is ingot shape, the seed is 50~150. The sowing method is basically the same as that of raw stone flower. The stem is thick, fleshy with nodes. Leaves are fleshy, two-state, long and slender growing leaves opposite, often not joined, dormancy leaves short and thick, hemispheric, high joined opposite leaves. Leaves in the growing period begin to grow after the end of the dormant period. In the early stage, the leaves are shorter and resemble rabbit ears, which gradually grow longer as the plant grows, and wither again in the next dormant period. The Chinese players' saying that "they grow up in vain" is a false statement. Every year, they go through a process from short leaves to long leaves. 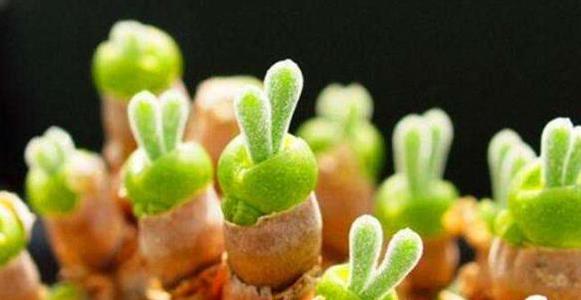 Monilaria Obconica is native to South Africa, a very drought-tolerant, pulpy plant. The demand for sunshine is not much. In summer, it must be shaded, ventilation, cut off water. In summer temperature is too high and dry, it enters dormancy state directly, boil to fall after watering can resume growing. The spring and Autumn period, apply regular watering, which can keep the blade upright. The blades will collapse when there is no water. 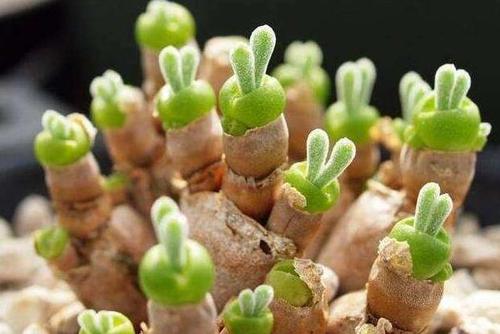 How to grow and care for Monilaria Obconica

The suitable temperature for monilaria obconica growth is generally 15~25℃, not less than 5℃ in winter. Artificial cultivation can generally choose peat, vermiculite, perlite and use a large number of granular soil (conducive to drainage and ventilation), the root system developed with a deeper basin; Growing season watering thoroughly watering thoroughly, dormant period Monilaria Obconica need not feed water; Thin fertilizer can be applied during the growing period, but not too frequently;

Above 35 ° C the whole plant slowly Withers and goes into hibernation. The dormant Monilaria Obconica does not need water, when the growing season leaves are completely dry, leaving only highly connected dormant leaves. The Monilaria Obconica shrinks and becomes smaller, not dead, and needs to be kept in a cool, dry place for the summer. When the temperature is lower than 0℃ in winter, it will also enter a dormant state and need to cut off water.

Monilaria Obconica is a perennial plant with succulent stems and leaves that can be propagated from cuttings or seeds. In the Northern Hemisphere, the growing season runs from September to March, with summer dormant. It is a philophilous plant, usually growing in rock crevices or under the shade of other plants, so the cultivation process needs to avoid direct sunlight.

Generally, spring is a good season for growth, which grows quickly. Avoid strong direct sunlight in the peak season. Monilaria Obconica is sensitive to temperature. Monilaria Obconica needs a lot of water, and if it dries too much, both ears drop and the water is restored.

Too high will slowly yellow, and to dormant appearance, pay attention to half sunshine can be, the temperature over 35 degrees Celsius will be the whole plant slowly withered, into hibernation. Monilaria Obconica does not use water during the dormant period, we do not think they are dead at this time, the plant will be left soybeans big point, withered, placed in a cool and ventilated place can be safe for the summer.

By the end of autumn, when the temperature drops, the growth can resume again. Monilaria Obconica can give the water to avoid strong light. I hope that the flower friends who just contacted it will pay attention to that, it will sleep at 0 degrees Celsius and the water will be cut off until the temperature rises.

Sowing of Monilaria Obconica can be done in the autumn, usually in autumn, or in the spring or winter, with a temperature of 12-15 degrees at night and around 25 degrees during the day.

How to grow and care for Monilaria obconica