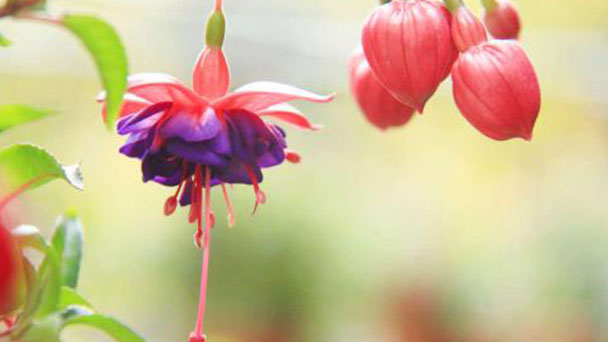 Hybrid Fuchsia is an evergreen shrub. Hybrid Fuchsia plant height can reach 2 meters in the open air and 1 to 1.5 meters in pot. It has luxuriant leaves, soft branches and arched branches, and beautiful appearance.The stalk of the flower is long and thin, hanging high, the stamens extend beyond the corolla, and the flowers hang high like palace lanterns. Hybrid Fuchsia shows its cuteness in its unique form. 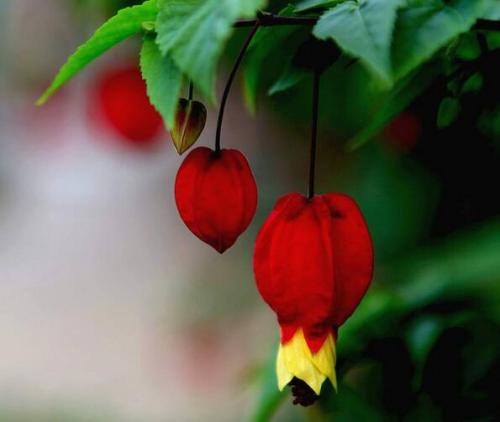 Hybrid fuchsia is a unique plant with slender upright leaves similar to the mountain lily, which, when rolled up, looks like an ancient scroll. Near the Flower stem there are things like whiskers wrapped around the flower stem to keep it upright.

Each flowering period of the flowers can only be maintained for about a week, in the upper part of the stem of the leaves will bulge out look like wind bells, also like a bell shaped flowers, the shape of the flowers is long, probably like 7-9 turns of the natural drooping. The color of flowers is red or orange.

Hybrid Fuchsia grows in northern and western Yunnan, about 2,200m above sea level, epiphytic on old trees or rocks. It is also found in northern Myanmar.

Hybrid Fuchsia was originally produced in Brazil, Uruguay and other places in South America. Our country Fujian, Zhejiang, Jiangsu, Hubei, Beijing, Liaoning and other places each big city has cultivation.

Moisture : In winter and the rainy season 2~3 days watering once, autumn and sunny day watering once a day, the summer is in a semi-dormant state to control the water, to prevent the occurrence of leaf root rot phenomenon.

Sunshine: Hybrid Fuchsia likes the environment with sufficient sunshine. If there is a lack of sunshine, it is easy to result in the reduction of flowering.

Temperature: The suitable temperature for growth is 15~25℃. In summer, it is afraid of hot and high temperatures. When the temperature exceeds 30℃, it will enter a semi-dormant state, and the winter shall not be lower than 5℃. 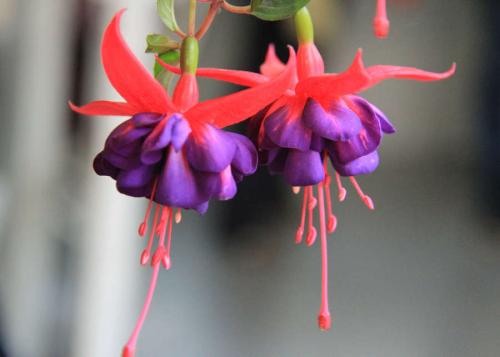 Safety of the summer

Summer shade: When it comes into the summer, if the temperature exceeds 30℃, to avoid the strong sun exposure. During the day, it can be moved to the balcony below the cool and ventilated place, after sunset and then moved on the balcony (the best shade or shade). Move basin plants ahead of schedule from south balcony to buy north balcony to go up in order to avoid sunshine. Place the pot in a large Bamboo basket or cardboard box, surrounded by soft soil in the pot to prevent the pot from being baked directly by the sun.

Increase temperature and decrease temperature: Put half or the whole brick into a container, fill the container with clear water (water should be higher than the brick surface), and then place the pot plant on the brick, which can reduce temperature for a long time. Move the pot Hybrid Fuchsia downstairs ventilation and avoid the light, dig a small pit in the ground, bury the pot plant in the soil, wait until autumn and then put the pot plant indoors. Once the pot Hybrid Fuchsia is basked in by the scorching sun after heat, before has not come out of the heat, we must not water to the leaf inside the pot, in case of uneven cold and heat, bring about meaning

External damage. During the period of heat prevention and cooling, due to the reduction of light, to control watering, not too much too often, often keep the basin soil moist.

Prevent rain: In summer there is a rainy season. Before the rain, put the pot plant in the place of rain shelter, such as thunderstorm too late to move the pot,

The water in the basin should be emptied out in time. If the basin is still too wet at this time, the charcoal that has been burned can be sprinkled on the surface of the soil in the basin, so that excessive water evaporates a part. If the moisture in the basin soil does not evaporate for a long time, the basin soil is too wet, and it is easy to cause falling leaves and rotting roots, resulting in the death of the whole plant.

Gray mould occurs when it is overcast and rainy or when too much nitrogen or too little light is applied. The main harm stems, leaves, flowers, resulting in water spots in the affected parts. If not timely prevention and treatment, will gradually expand to decompose, covered with gray hair hyphae, seriously will make the plant die.

Solution: In the early stage of the disease timely spray 500 times the solution of 65% of the Zinc or 50% of the carbendazim and other new agents, every 7~10 days spray 1 times, continuous spray 3~4 times, usually pay attention to ventilation and light, so that the plant growth well, improve the plant resistance. After the onset of the disease, cut off and dispose of the diseased branches and leaves in time to reduce the source of the disease.

Powdery mildew mainly harms stems, leaves and buds. Sickness after the surface has a layer of white powder, serious when the leaf atrophy, flowers become small.

Because the flowers grown by Hybrid Fuchsia are always neat, symmetrical and like lanterns, like paper cuts stuck on lanterns. Pasted in the palace lantern, gauze lamp, cage lamp on the same flowers have symmetry. Lanterns represent good luck and peace in China. Therefore, its flower language is gratitude, thank the mistake. 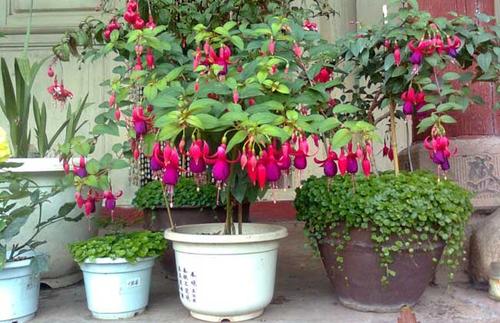 How to care for Hybrid Fuchsia

How to take care of Hybrid Fuchsia

How to grow and care for Hybrid Fuchsia