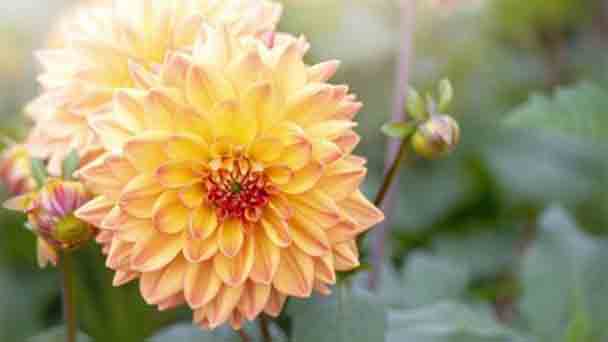 Dahlia flower is a perennial herb with huge stick-shaped roots. Its stem is erect, multi-branched, 1.5-2 meters high, and strong. Dahlia is native to Mexico. Mexicans regard it as a symbol of generosity and splendor, so they respect it as the national flower.

Dahlia flowers are perennial herbs with huge rod-shaped roots. The stem is upright, multi-branched, 1.5-2 meters high and strong. The leaves of the dahlia flower are 1-3 pinnately lobed, the upper leaves are sometimes not divided, and the lobes are ovate or oblong-ovate, the bottom is gray-green, and both sides are hairless. 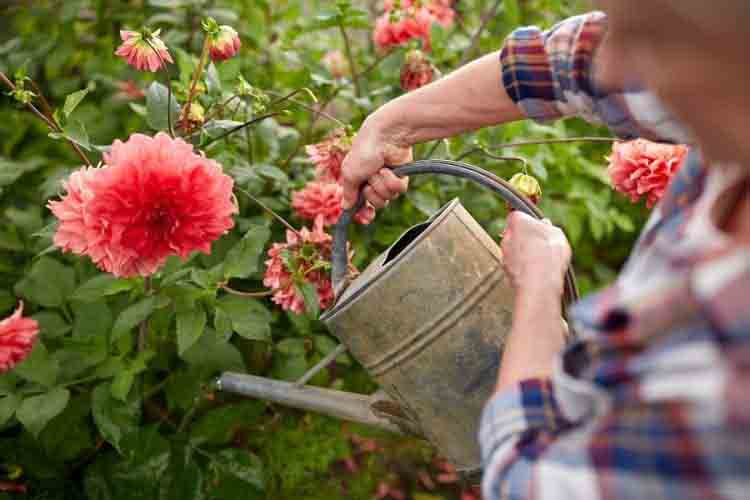 The heads of such a flower are large, with long peduncle, often drooping, 6-12 cm wide. There are about 5 outer bracts, oval-elliptic, leaf texture, inner membranous, elliptical-lanceolate. The lingual flower is 1 layer, white, red, or purple, often ovate, with inconspicuous 3 teeth on the top, or entire; the tubular flower is yellow, sometimes all lingual flowers in cultivated species.
The achenes of this plant are oblong, 9-12 mm long and 3-4 mm wide, black, flat, and have 2 inconspicuous teeth. The flowering period of dahlia flowers is generally from June to December, and the fruit period is from September to October. 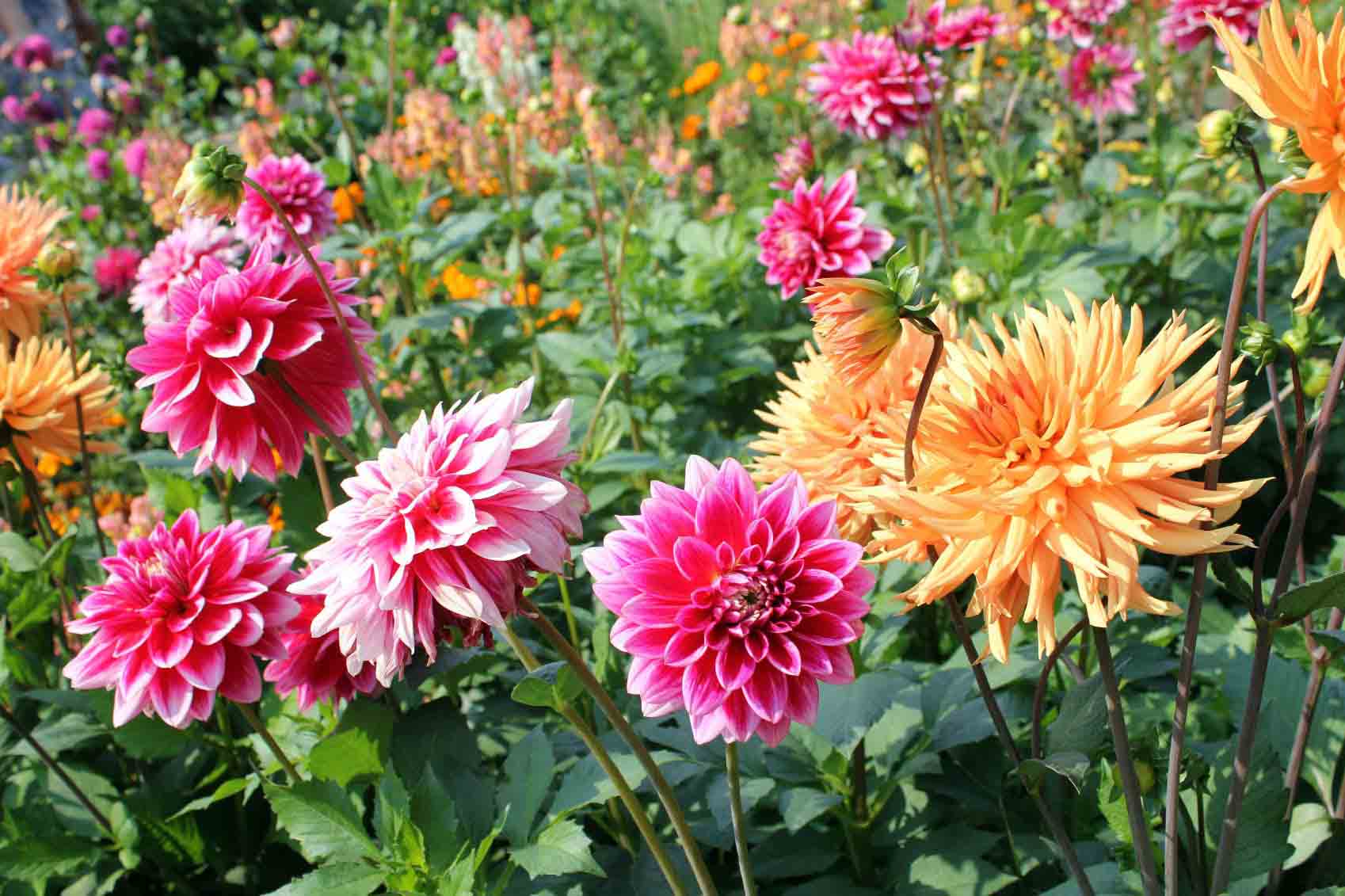 Dahlia flower is called one of the world famous flowers mainly because of its long flowering period, large flower diameter and many flowers. In the northern region, the flowering period is from May to mid-November. Under suitable temperature conditions, the annual flowering can be continuous, with the most blooming after autumn. The maximum flower diameter of fine Dahlia flowers can reach 30~40cm, which is unique among flowers. There are seven colors of red, purple, white, yellow, orange, ink, and multiple colors. The flowers have single and double petals. Single-petal flowers have a shorter opening time and double-petal flowers have a longer opening time. The flower characteristics and petal shape changes of dahlia flowers are the main basis for species identification. There are variety groups such as ball, chrysanthemum, peony, decorative, dish, disc, hydrangea, and peony, with magnificent colors. , The flowers are beautiful and famous.
Therefore, dahlia flowers are suitable for planting in flower beds, flower paths or in front of the court, and dwarf varieties can be used as pot plants. 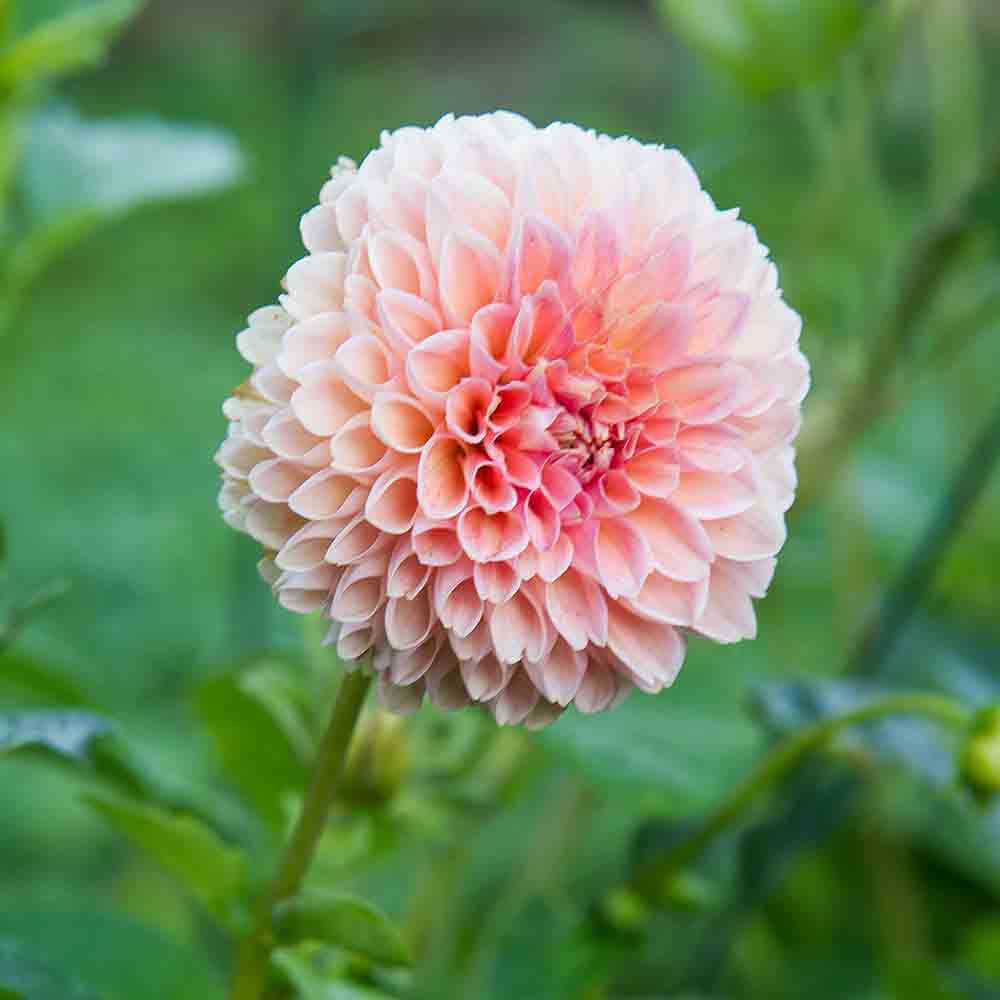 Dahlia flowers prefer half shade, too strong sunlight affects blooming, the light time is generally 10-12 hours, and direct sunlight should be avoided when cultivating seedlings.

Dahlia flowers like a cool climate. They bloom in late September, the largest, most colorful, and most prosperous, but they are not tolerant to frost. The stems and leaves wither immediately after frost. During the growth period, the temperature requirements are not strict, 8~35℃ can grow, 15~25℃ is appropriate.

Dahlia flowers are not tolerant of drought and waterlogging. Generally, potted plants should be watered if the soil is dry so that they can see dryness; they can be drained on rainy days (ground plants do not need to be watered frequently). 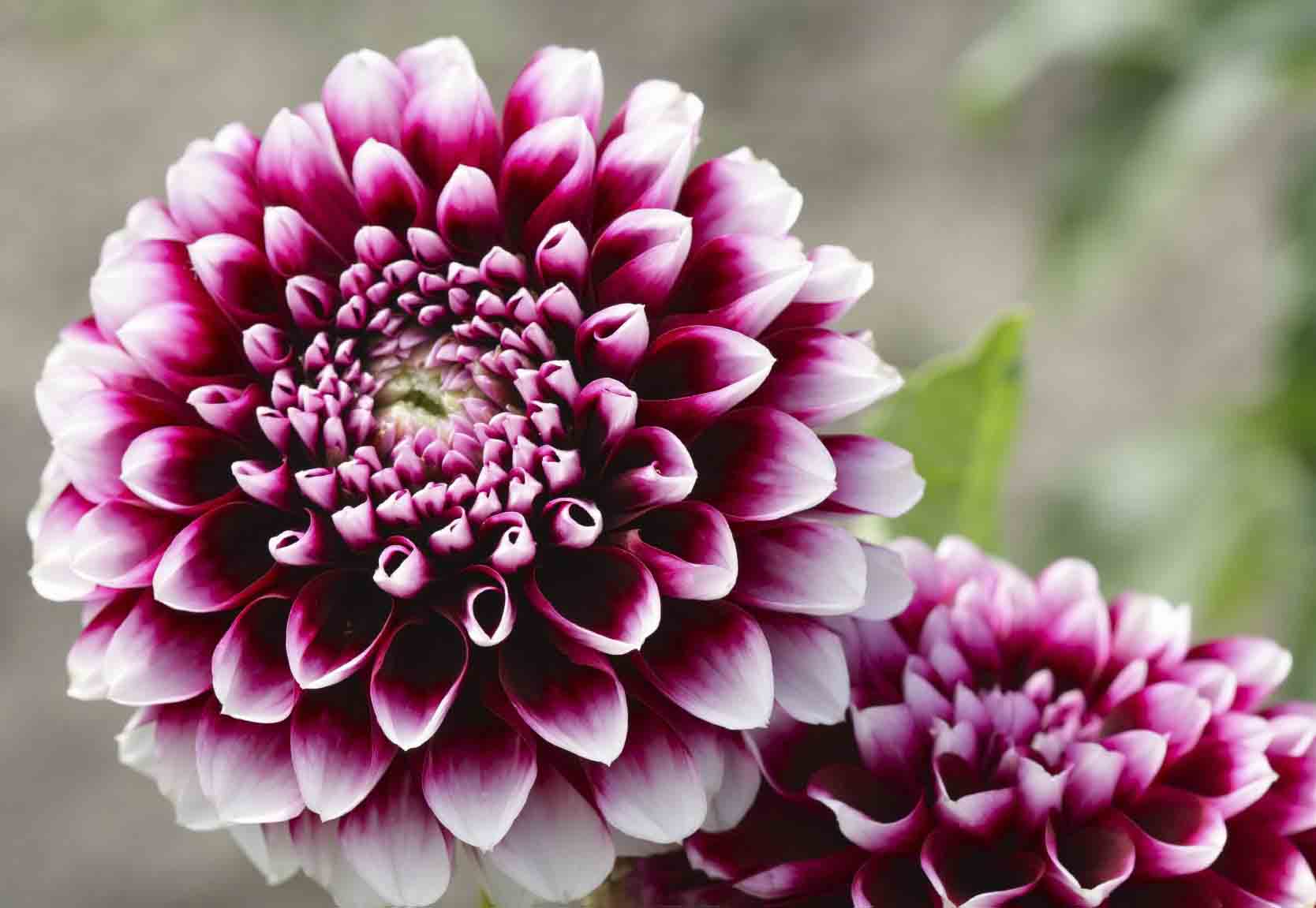 Dahlia flowers are native to Mexico and are the most widely cultivated ornamental plants in the world. They were introduced to China in the early 20th century and are now cultivated in many provinces.

From March to April in spring, the roots of the stored dahlia flowers are taken out, and each root and the buds attached to the root neck are cut and planted. Since dahlia flowers only have buds on the root neck, each root tuber that is divided must have a root neck with buds. Tubers without root necks or no buds on the root necks do not sprout and cannot be planted. If the sprouting point on the root neck is not obvious or easy to identify, you can germinate in early spring, arrange the root clumps at a relatively close distance in the hotbed, then it’s time to choke the soil, water, and give a certain temperature. Each dahlia flower has at least one bud. The ramet reproduction is simple and easy, the survival rate is high, the plant of the dahlia flower is strong, but the reproduction coefficient is not as high as the cutting method. 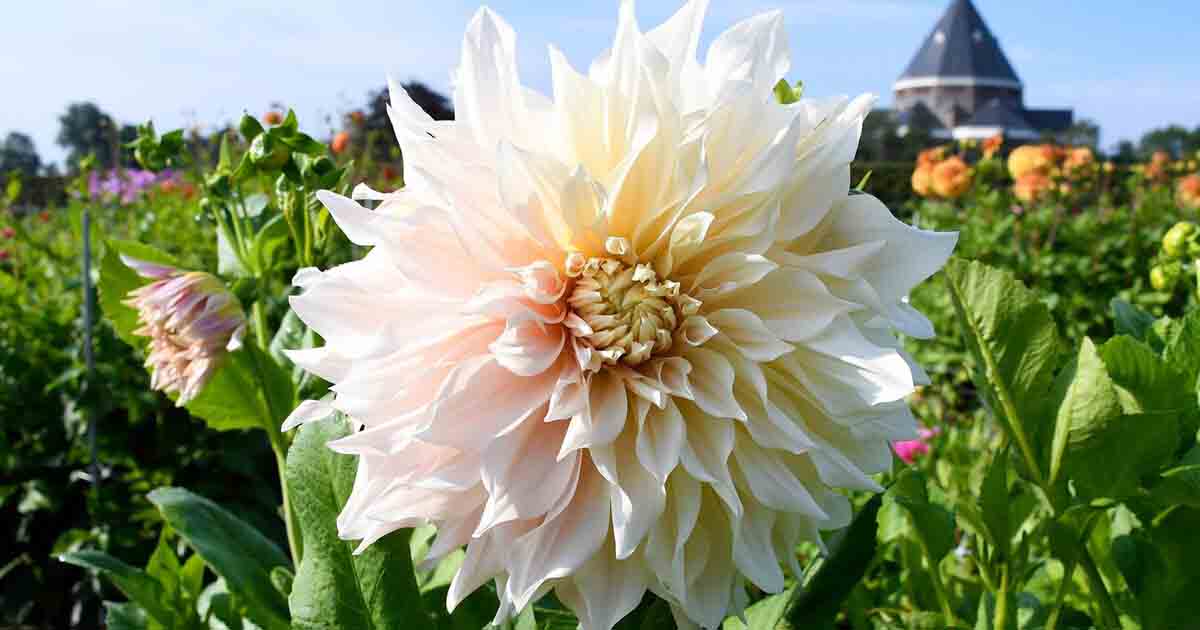 1. Site preparation: You'd better choose a field with deep cultivation, loose and fertile, flat terrain, and good drainage. Before deep plowing, apply 125 kg of superphosphate per mu as basal fertilizer, plus 0.5 kg of 50% land, Disinfect the soil, turn the soil about 15 cm deep, and then tidy and rake it, make a high border or flat border 2 meters wide, and a trench depth 20 cm. You’d better open the three trenches inside and outside to facilitate drainage.
2. Cutting method: From June to August, the lateral buds of dahlia flowers grow to 15 to 20 cm. You could combine the lateral buds and cut them for sowing. Cuttings need 3 buds, leaving 2 buds on the upper part, cutting the 3rd bud to the base of the leaf to remove the leaves, inserting them deep into the soil and the second bud, watering it thoroughly and using a 50% shading net for double-layer shading. Water once in the morning and in the evening on a sunny day. Continuous watering for half a month, keep the soil moisture at 90%, take root after 3 weeks, and have a high survival rate, and it will bloom in autumn that year.
3. Post-cutting management: After the cuttings of dahlia flowers are alive, combine cultivating weeding, topdressing with compound fertilizer saturated leaching solution before and after flowering, and add 400ml mother liquor for extra-root topdressing for every back sprayer (about 12.5 kg). Dahlia peanuts should not be deeply cultivated after they are rooted to avoid damage to the roots and prevent weed damage. Because the plants are juicy and soft, they must be erected to prevent the stems and leaves from breaking. The dahlia flowers seedlings of small-flowered varieties are topped when the seedlings are 15 cm high, making the plants short and sturdy and blooming. When the flowers die, they can be removed in time to prolong the flowering period of the dahlia flowers.

Seed reproduction occupies a large proportion of the cultivation of dahlia flowers and is suitable for varieties that are easy to bear. Generally, the dahlia flowers seeds harvested in autumn are sown between February and March of the following year at 15-20°C during the day and no lower than 12°C at night. The seedlings of the dahlia flowers reproduced from the seeds have vigorous vitality, healthy growth and development, and strong adaptability, and a large number of dahlia flowers can be obtained in a short time. But the flowers and fruits are slow. The flowering period is late, and the excellent characteristics of the female parent cannot be maintained, and there is degradation.
Read Next:
Top 10 Most Beautiful Roses in the World
Top 10 Most Beautiful Flowers in the World
26 Best Autumn Flowers to Plant for Fall Color in Garden

How to Grow & Care for Dahlias Flower