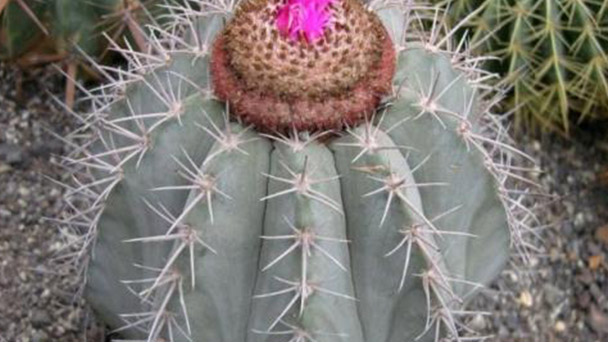 Gymnocalycium marquezii, 4cm high and 10cm in diameter, with the grassy green epidermis, 8 ribs, divided by large nodules, 2 ~ 3cm in size. The spines have white felt hairs. The spines are 6 to 7, finely conical, 1 to 2.5cm long. The lower part is gray, and the upper part is reddish-brown. The flowers are a delicate (champagne flask), 4cm in diameter, pale rose-red with brown streaks in the middle.

Gymnocalycium Marquezii has pale and elegant skin color, beautiful flowers and thick thorns but not scattered. The rarest is in the artificial cultivation of good growth, is a very adaptable species. Greenhouse layout, exhibition display, assembly bonsai, landscape box gardening can be used, but the windowsill, the desk is also very appropriate.Gymnocalycium marquezii is a beautiful, large, spotless white flower that blooms in the fall and lasts a long time. 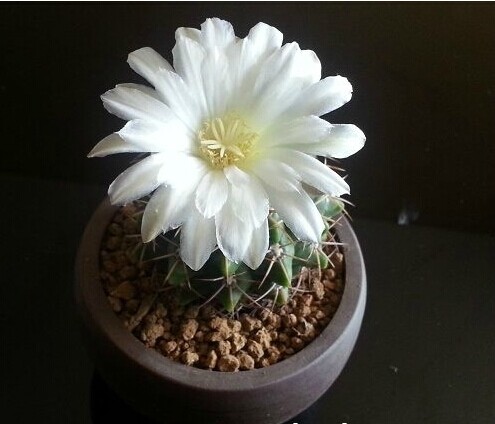 Gymnocalycium marquezii belongs to the genus Gymocalycium of the Cacti family. It is oblate, 4cm high and 10cm in diameter. The epidermis is grassy green with 8 edges, divided by large tumor masses, which are 2 ~ 3cm in size. The spines have white felt hairs. The spines are 6 to 7, finely conical, 1 to 2.5cm long. The lower part is gray, and the upper part is reddish-brown. The flowers are a delicate (champagne flask), 4cm in diameter, pale rose-red with brown streaks in the middle.

The ovary and cone of Gymnocalycium marquezii have broad and blunt scales, and the floral axils are smooth. The genera Bonin and Groupridge have similar scales. But the Bonin flowers are bright yellow or purple with short tubes, while the Spines are in the depressions between the verrucae.

Ecological habits of the Gymnocalycium marquezii

Gymnocalycium marquezii is sun-loving, with terminal flowers, receptacles with large scales, but without hairs and spines. Most of the colors are not bright but elegant except for a few species.

Gymnocalycium marquezii is one of the few species suitable for semi-closed cultivation, but the soil should be loose and fertile, the light should be sufficient, and the grafting should be on the measuring gauge. The initial growth is good, but the lower part is easy to age with time, so the roots must be taken out in time.

Unless something goes wrong in cultivation it will die, and the plant will bloom when it reaches a certain size. Due to the different growth environments of its place of origin, the planting environment and conservation conditions required by each species are also different.

Gymnocalycium marquezii grows well in a mixture of clay and humus soil. Some species are sensitive to excess moisture, so the soil needs to be well ventilated and loose. It is also important to note that the soil should be acidic, and in alkaline soil, the plants tend to turn yellow and look a little withered and dry yellow. In this case, the florist should be immersed in water with a pH of about 4.5.

Gymnocalycium marquezii is best suited to semi-shaded environments. For those with few spines, special care should be taken in the spring to shield them from the midday sun to avoid unsightly burn marks. Those grown in central and northwestern Argentina, and those from Uruguay and southern Brazil, need a certain amount of heat during the winter.

In general, gymnocalycium marquezii can take root and grow well, and those species with lateral buds can easily propagate through their lateral buds. But new seeds are often produced by sowing seeds, and in about three to four weeks a seedling will appear. While some species flower after 1-2 years, most species can not pollinate by themselves, after artificial pollination of the fruit grows well. Hybrids are also more likely to survive, but not as pretty as wild hybrids, and not as easy to maintain.

The propagation of Gymnocalycium marquezii

The propagation methods of Gymnocalycium marquezii were sowing, cutting and grafting.

The seeds can be pollinated by themselves and bear fruit. In the absence of seeds, the seeds must be forced by cutting off the top or digging out the "heart" because the seeds do not produce seeds for nothing. 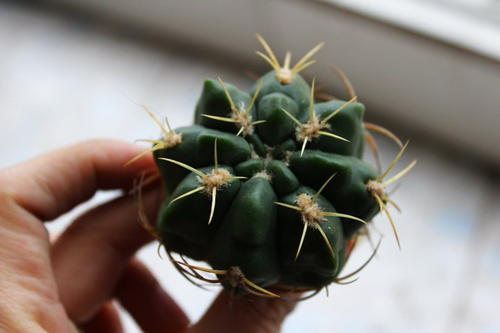 Warbler usually has pink, white or yellow flowers. But unfortunately, this fancy flower will soon fade. In 1845 it was recognized as the first spherical Cactus because of its unusual appearance. But you can recognize this genus by not looking at its flowers, which are usually oblate or oblate in shape, always rounded, and almost all of the spines have transverse furrows between them.

Distribution of the Gymnocalycium marquezii

Gymnocalycium marquezii originated from South America, mainly distributed in Bolivia, Paraguay, Uruguay, southwest Brazil and Argentina. Because of its extensive regional origin, so it is not difficult to understand the shape of the signature.

Gymnocalycium Marquezii is lightly colored with beautiful flowers and thick but not scattered thorns. The rarest is in the artificial cultivation of good growth, is a very adaptable species.

Garden use of Gymnocalycium Marquezii

Gymnocalycium Marquezii is suitable for greenhouse layout, exhibition display, assembling bonsai, landscape box gardening and so on. It is also suitable for windowsills and desks. 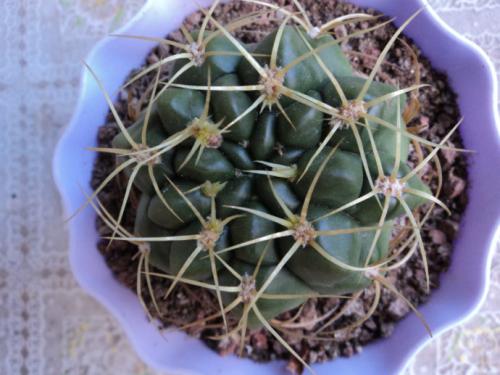