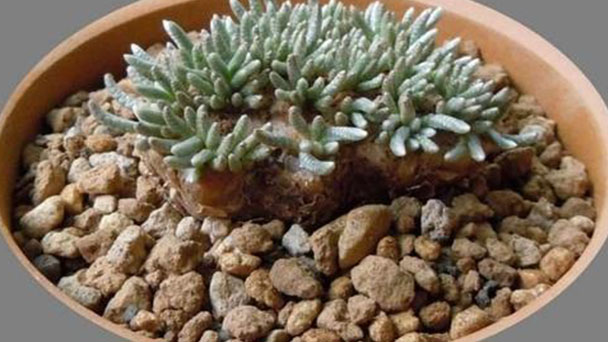 Anacampseros alstonii is native to the desert areas of South Africa and Namibia. Its peculiar form, the tiny branches and the rhizomes of primitive simplicity set each other off becomes an interest, like a pick on the rock stone sea anemones, and like a dancing measure, and the small plant type, slow growth, like living arts and crafts, suitable for small basin planting, put in the place such as sunlight, windowsill, watch carefully, in your spare time to appreciate its magic charm. 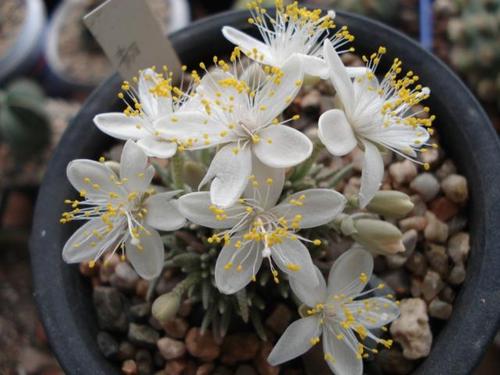 The flowering period of Anacampseros alstonii is less than 2 hours, because of its short flowering period, coupled with the introduction of the plant in China is not long, cultivation is not too common, few people have seen its flowers. Anacampseros alstonii usually blooms in the sunny afternoon and closes at night. The life of each flower is only 4 ~ 5 hours. If it is overcast and rainy or the cultivation environment is not adequately illuminated, it is difficult to open.

Anacampseros alstonii likes a cool, dry and sunny environment, drought resistance, afraid of water, but also afraid of hot and humid, slightly cold, winter into the indoor winter, the temperature should not be lower than 5 degrees Celsius.

Anacampseros alstonii likes a cool, dry and sunny environment, drought and half shade, avoid water wet and strong light, but also afraid of hot and humid, slightly cold. The suitable growth temperature is 20~25℃, and the growth period is summer.

Repot every spring for Anacampseros alstonii. The basin soil should be well-drained and kept slightly dry. Summer high-temperature strong light should be appropriate shade.

In the Anacampseros alstonii growing period every 2 weeks 1 time, fleshy stem base swelling, tuber shape, water should not be much, dry weather to the pot around the spray, do not spray water to the stem and leaves. In winter, the room temperature is low, and the basin soil keeps dry.

In the Anacampseros alstonii growth period fertilizes 1 times a month, with the special use of succulent fertilizer.Fertilizer must not stain the leaf surface.

Anacampseros alstonii likes sunshine and is a full sunshine plant. 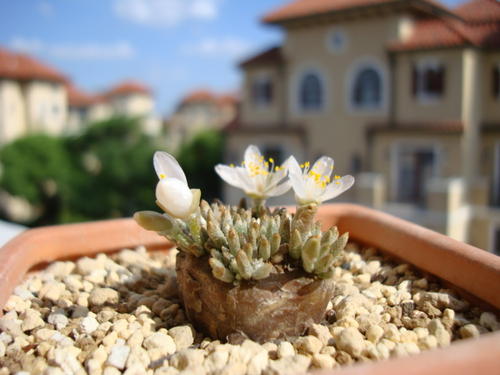 In spring, indoor pot sowing was used, the germination room temperature was 20-25 ℃, and 15 to 21 days after sowing.

In spring, cut the strong top stems of Anacampseros alstonii, 3 to 4 cm long, dry them a little, then insert them into the sand bed, keep the soil slightly dry, and root for 21 to 27 days after planting.

Anacampseros alstonii is native to the desert areas of South Africa and Namibia.

Other similar species in the genus Rumei are silver silkworm and snow goddess.

The silver silkworm (A. albissima), also known as the dance of the goblins, has A large fleshy short stem, A cluster of fine circular branches, and A surface densely covered with scaly spiral-shaped leaflets.

A. Papyracea, also known as White Snake Dian, has a short fleshy stem, fat and branched at most, which is inclined or curved and extends to the ground. The stem surface is covered with scaly white paper leaflets, and the top of the stem is covered with small white and green flowers. 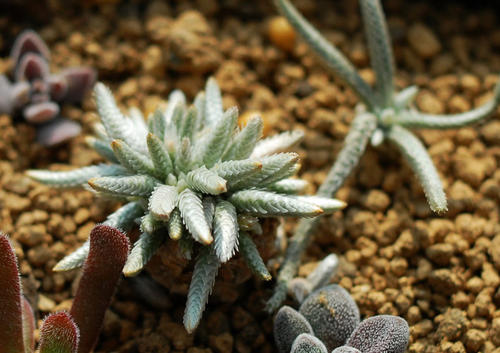