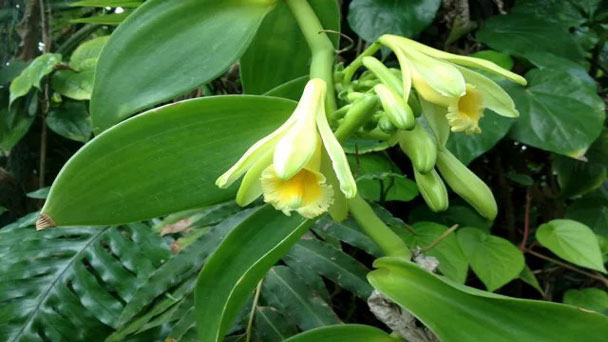 Where to Grow Vanilla Bean Orchid

Vanilla Bean Orchids make excellent container house plants when grown as a vine, because this type of orchid is both epiphytic and semi-terrestrial. This means vanilla bean orchids lives above the ground where its roots attach to tree trunks or other support from which it takes in water and nutrients. In growing a Vanilla vine in a pot, some support is needed for the vine to climb on and attach itself to. This can be a post or slab of wood, preferably a type that does not rot easily like cedar or cypress. 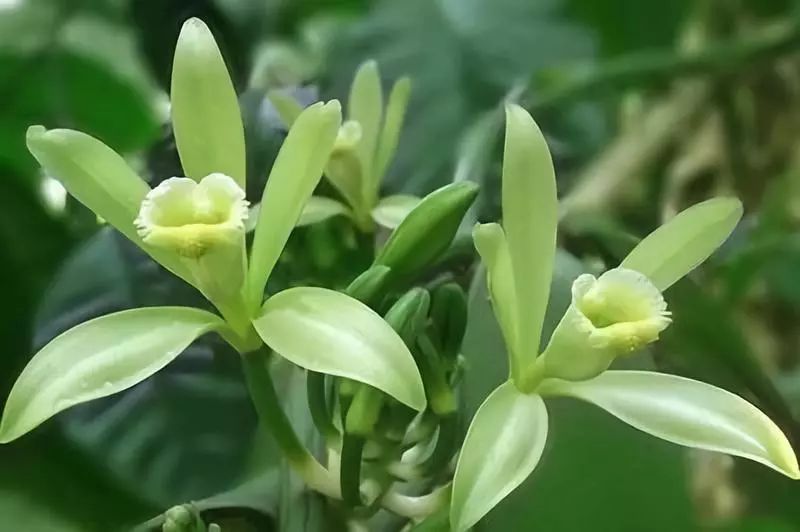 How to Grow Vanilla Bean Orchid

Commercial growers often use 3-foot cuttings for vanilla bean orchids propagation, as that bloom sooner. Gardeners may have to settle for shorter lengths which they can wheedle from friends. In either case, the cuttings root easily, and generally don't require the use of a rooting hormone. 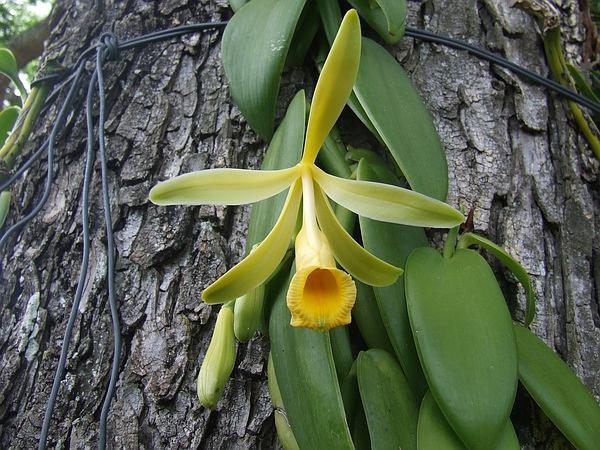 How to Care for Vanilla Bean Orchid (Vanilla Planifolia)

As covered in this article about orchids care and light, Vanilla Bean Orchids need bright natural light in order to thrive. You'll want to make sure that your vanilla orchids don't get direct sunlight because this could cause sunburn and damage the plant. When you are choosing the perfect place to grow your Vanilla Bean Orchid you will need to keep this in mind. A great place to grow vanilla orchids is in the southern end of a greenhouse because they will be able to receive indirect bright sunlight or on a shaded tree or trellis.

Soil rich in potassium and calcium is ideal for Vanilla Bean Orchid. It should be light, well-draining, and with a pH between 6.0 to 7.0.

Vanilla Bean Orchids should be watered regularly. Watering frequency – as covered in this article about watering orchids – can be determined by a few different things. The whole plant shouldn't dry out on a regular basis, however, you can let the top 2 or 3 inches of the plant dry out between waterings. On the contrary, in order to initiate flowers to bloom, you should allow the entire plant to dry out between waterings for a few weeks.

Ideal temperatures for Vanilla Bean Orchid are between 60 to 70 degrees Fahrenheit at night and 80 to 95 degrees during the day. These Vanilla Bean Orchid plants are not frost-tolerant, which means those who don't live in a tropical climate must grow them in a greenhouse.﻿ Mist your plant regularly and make every effort to keep an 80 percent humidity level. At the same time, good air circulation is required to prevent fungal rot.

Vanilla Bean Orchid will not bear fruit until they are at least three years of age. When the vanilla plant is 2 ½ – 3 years old it is advisable to prune the tip if you want the vanilla plant to produce flowers.

Vanilla Bean Orchid are generally free from major pests and diseases. However, they are susceptible to root rot. Root rot can be a result of overwatering or a fungus in the soil. Common symptoms of this plant disease include dull and yellowing leaves, wilting, and mushy, black roots. Other common fungal diseases of Vanilla Bean Orchid plants include anthracnose, black rot, rust, and root and stem rot. Common pests include Giant African snail, vanilla bug, vanilla vine weevil, beetle, white grubs, and Achatina. (Also Read: Why Is My Orchid Stem Turning Yellow) 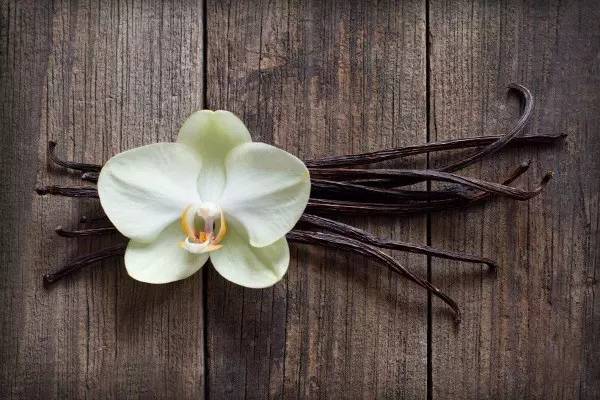 West Indian Vanilla is another species of vanilla used for its fruits and a secondary source of vanilla flavoring. It is native to southern Mexico and South Tropical America. The West Indian vanilla orchids feature long thin stems that measure about 2 cm in diameter and over 5 m in length. The long leaves, which measure 10 to 30 cm, are thick, dark green, and glossy. Tahitian Vanilla a hybrid between V. planifolia and V. odorata that was first introduced in Tahiti, hence the name. It produces shorter and broader seed pods than those of a more widespread species, the flat-leaved vanilla (V. planifolia).
Aside from the difference in appearance, this orchid species also have a distinct taste and fragrance. It is commonly used in desserts, fresh fruits, baked goods, beverages, sauces, and more. Leafless Vanilla is a vanilla orchid species native to Southeast Asia. It is cultivated in Laos, Malaysia, Thailand, the Philippines, Myanmar, and Singapore. The plants produce clusters of three to four flowers on a short inflorescence. They bloom in late spring, summer, and fall.
This particular type of vanilla is named as such because of its unusual leafless vine-like thick stems. These stems have internodes spaced at about 4 inches apart. These internodes produce short and thick sheath and roots. Chamisso's Vanilla is a vanilla species native to South America. It is named in honor of German poet and botanist Adelbert von Chamisso. The plant features fleshy, pale green leaves and blooms in late spring to early summer. Mexican Vanilla is a type of vanilla orchid that can be found growing in Mexico, Central America, West Indies, northern South America, and southeast Florida. The plant produces vines that grow up to 15 in length. 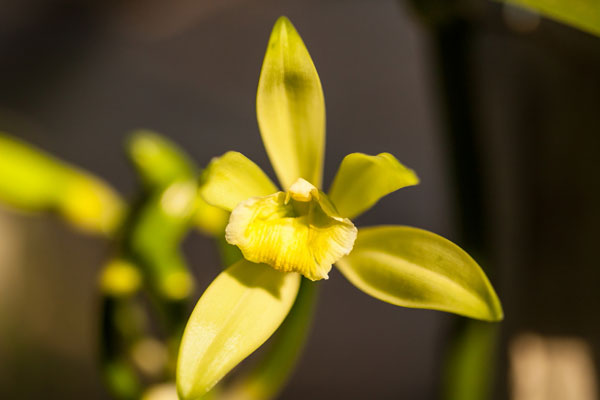 When Will My Vanilla Bean Orchid Produce Beans?

Your Vanilla Bean Orchids will produce beans in roughly three years. However, each plant is different and the slow coaches have been known to mature after seven years. You'll know that your plant is ready when it blooms for the first time. You might want to do serious research or practice with other orchids before you attempt to hand-pollinate vanilla. The process is delicate and tricky. But once pollinated, the beans will appear within months. After that, they will need the better part of a year to mature for harvest.

How to Grow Vanilla Bean Orchid in Container?

Vanilla Bean Orchid makes brilliant container residence plant life when grown as a vine, due to the fact this kind of orchid is each epiphytic and semi-terrestrial. This capability lives above the floor the place its roots connect to tree trunks or different guides from which it takes in water and nutrients. In developing a vanilla bean orchid in a pot, some guide is wanted for the vine to climb on and connect itself to. This can be a publisher or slab of wood, ideally a kind that no longer rot without difficulty like cedar or cypress.
Read Next:
15 Fall Vegetables to Plant for Your Autumn Garden
What Plant Produces Vanilla