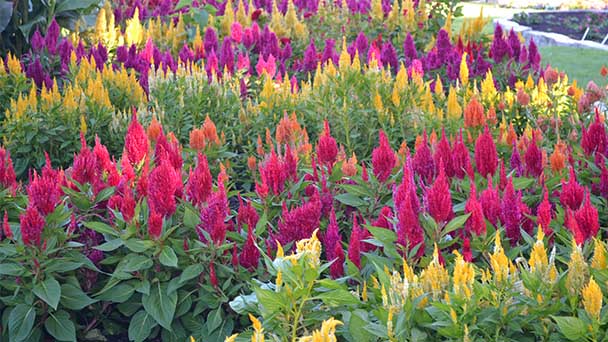 We should know that Celosia Flower should apply enough base fertilizer before planting, and half of the soil and fertilizer should be mixed. Celosia flower should also be watered properly during its growth. The basin soil should not be too wet, and it is better to be dry. Some phosphate fertilizer can be applied at the later stage of growth, which can make the flowers huge. At the mature stage of Celosia flower seeds, we should add less water and fertilizer, so as to keep the flowers colorful for a long time.

Celosia flower's requirements for soil are not very strict. However, the sandy soil with high and dry terrain, sunny, fertile and good drainage performance is the best soil suitable for Celosia flower. Celosia flower is afraid of drought, but it is afraid of waterlogging, so it should be watered properly in summer, but there should be no ponding. If it is cloudy and rainy, drain the water in the flowerpot in time.

Celosia flower likes to grow in a high-temperature and dry environment, likes sunshine, is resistant to barren, not cold, and is afraid of ponding. Therefore, it is very simple to pay more attention to sunshine and watering when Propagation. Celosia flower is generally cultivated as a flower bed, and occasionally as a potted plant, it is not cultivated from the seedling, but directly transplanted from the ground to the pot during the flowering period.

Celosia flower likes a warm environment and needs plenty of sunshine when growing. The sunshine is at least 4 hours a day, so we should pay attention to the sun when propagating Celosia flower. The temperature suitable for the growth of Celosia flower is between 18-28 degrees. When the temperature is low, it grows slowly, and the plant dies after winter.

The beautiful Celosia flower needs pruning to ensure that plants do not overgrow. If necessary in the planting process, kneading treatment is also needed to promote the growth of plant branches. If the cultured Celosia flower is used as cut flower, the tender leaves can be removed when the plant grows to 20 cm high. The amount of fertilizer required during the growth of Celosia flower is not high, but it is not unnecessary, but the amount of fertilizer is relatively small. Before entering the flower pot, the potting soil should be fully fertilized, and topdressing can be carried out before flowering in autumn.
As long as flowering plants are inseparable from sunlight, Celosia flower is no exception. If it grows in an environment with insufficient sunlight, the inflorescence of Celosia flower will become smaller and smaller, which greatly reduces the ornamental value of the appearance of cockscomb. Severe lack of light can also cause flowers to wither and die. This shows how important sunlight is to Celosia flower. If the daily illumination of Celosia flower can be guaranteed to reach more than a few hours, the quality of this flower will never be questioned.

Leaf spot disease mostly occurs on the lower leaves of Celosia flower. The pathogen is a fungus of Fusarium spp. of semiknow. Hyphae and spores overwinter in plant residues and soil and spread by means of wind and rain, irrigation, watering and splashing.
At the initial stage, the lesion is brown. After expansion, the lesion becomes round or oval, the edge is dark brown to purplish brown, and the center of the lesion is grayish brown to grayish white.
In the later stage, the leaves of Celosia flower gradually shrink, dry and fall off. Under wet weather conditions, pink molds, i.e. conidia of pathogenic bacteria, appear on the disease spots.
After Celosia flower suffers from bacterial wilt, there are water stains, oval or irregular brown spots at the stem base or underground root of the seedling, which are gradually concave, and the edges of the leaves are more obvious.
When the disease spot of Celosia flower expands and surrounds the stem for one week, the stem above withers and dies, which is generally not folded down, so it is called bacterial wilt. There are often little obvious gray white to gray brown arachnoid filamentous mold in the disease part, and gray brown or gray white biofilm often grows in high humidity, that is, basidiospores and basidiospores.
Epidemic disease is a destructive disease of Celosia Flower, which mainly causes damage to stems, leaves and branches. Incidence rate is high and develops rapidly.
At the initial stage of the disease, Celosia flower appeared water stains and dark green irregular spots, which gradually expanded and spread.
At the later stage of Celosia flower's illness, the lesion was dark brown and the edge was not obvious. The disease developed rapidly, and soon extended to the middle, and even patches appeared at the top. In severe cases, the stem of the whole plant was black.
The injured leaves mostly occur at the leaf edge and leaf base. After the injured petioles, the leaves wither and droop. When it is wet, the diseased parts produce sparse white mold.
In the high temperature and high humidity season, we should pay attention to the drainage and ventilation of Celosia flower, prevent the soil from splashing on the leaves during watering, and do not pour on the leaf surface during watering, so as to reduce the disease conditions. (Find more fall flowers here.)
At the initial stage of Celosia flower, we can spray 700 times 75% chlorothalonil wettable powder or 600 times mancozeb wettable powder to wet the soil under the plant. If we find that Celosia flower is seriously ill, it shall be destroyed immediately, and 70% pentachloronitrobenzene powder 5g-10g / plant shall be applied every day to disinfect the soil to prevent expansion and spread. 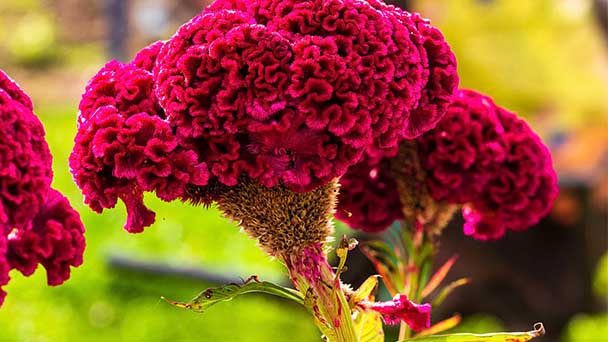 Celosia flower can also be propagated by cutting. The method of Celosia flower cutting propagation is to pick the heart and make it send out lateral branches when the seedling is about 15 cm high. Then perform shaping and pruning in July. You can remove the lower blade from the slightly cut head, insert it into 1 / 3 of the sand, and then place it in a dark place. About 2 weeks later, Celosia flower can take root and germinate. In the third week, it can be transplanted in pots and bloom in October. Celosia flower is a very common annual herb flower. It is rarely potted at home. It is mostly planted and raised by the roadside in the garden, but if you like it, you might as well cultivate one at home. It is still beautiful when it blooms.

Celosia flower has a variety of shapes, including chicken crown, pompon shape, feather shape, etc. The flower colors include bright red, dark red, white and other colors. There are also many leaf colors, including dark red and emerald green, which are very beautiful. Therefore, Celosia flower has high ornamental value. It has good ornamental value both in the courtyard and in the garden. (Find more fall plants here.)
Celosia flower also has certain medicinal value. It has the effect of cooling blood and stopping bleeding. It is often used to treat hemorrhoids, bleeding, clearing wind and reducing fever. Celosia flower can also be used to treat postpartum blood pain. The method is to decoct white cockscomb with wine and then take it to treat postpartum blood pain.

What is celosia flower meaning?

Is celosia flower annual or perennial?

Celosia flower is an annual herb flower rather than perennial herb. Celosia flower grows relatively fast. Sometimes it blooms two or three months after sowing. Usually, Celosia flower blooms in summer and autumn, specifically from July to October. However, the flowering period of Celosia flower is also related to the region.
The main influence is the temperature. Because the climate varies greatly in different regions, the flowering period of Celosia flower will not be different. In addition, its flowering date is also related to the time of planting. Therefore, autumn is only an approximate stage. Under different conditions, there will be differences.
Read Next:
Top 10 Most Beautiful Roses in the World
Top 10 Most Beautiful Flowers in the World
26 Best Autumn Flowers to Plant for Fall Color in Garden
Top 30 Fall Flowers to Plant Beautiful Autumn Flowers
30 Fall Plants for a Beautiful Fall Garden