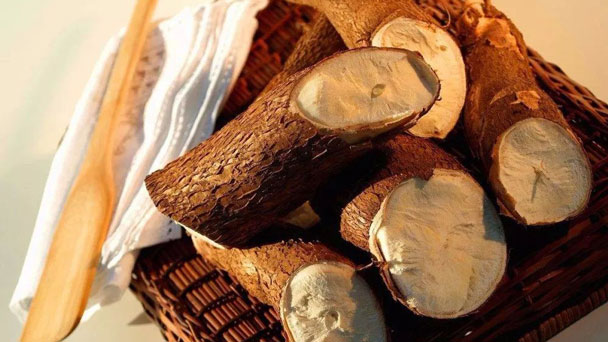 When to Grow Cassava (Manihot esculenta)

Plant cassavas indoors once temperatures are warm outside. Transplant when temps have reached at least 70°F. Harden plants off for 7-10 days before planting, and protect plants from cold. Transplants grown from stem propagations should be ready after 4-6 weeks. All growth stops at 50°F and below. 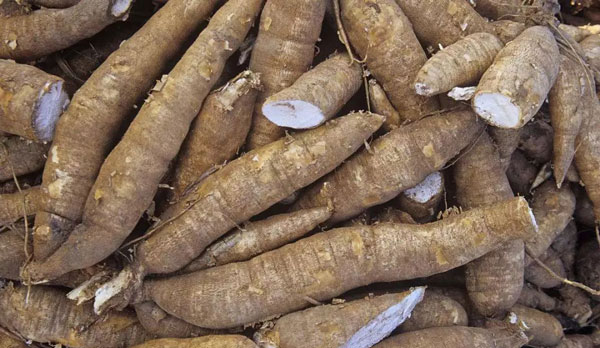 How to Grow Cassava (Manihot esculenta)

Cassava may be planted at any season, but it is better if the soil is always wet in the first 4-5 weeks after planting.
The stem to be planted must be from a matured plant, about a year old, 25 cm long with 5-7 nodes from the bottom stem. The thickness of the stem must not be smaller than half of the fattest part of the stem from where it is cut. If the stem is smaller than this, it will not have much nutrient content with which to start the new plant, so the roots and growths will be small.
Cut the stem crosswise with a sharp bolo. Avoid bruises and breaks, and plant within the week when the stems are cut.
The stems to be planted can last up to 10 days if these are wrapped in a wet cloth or sack and placed in any airy and shady place. If it is not possible to plant immediately, these will still grow within a month if it is sprayed with any of the following before storage: Orthocide or Daconil, Manzate, Dithane, Demosan, Brassicol, Visigran, or Agallol.
It should be stored in a shady, humid or cool place with temperature between 20-30°C. 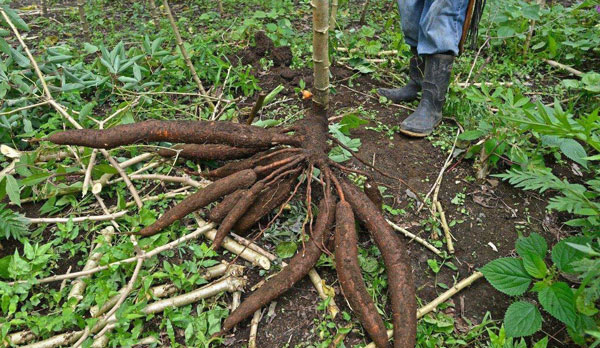 How to Care for Cassava (Manihot esculenta)

Although cassava plants produce their best harvest if they get extended exposure to sunlight, intense direct sunlight can cause leaf burn. In these instances, a partial shade environment would be better.

Cassava requires the addition of a balanced 14-14-14 fertilizer to the soil before planting. This fertilizer contains equal amounts by weight of nitrogen, phosphorous and potassium. The fertilizer is covered with a thin layer of soil and irrigated. Cassava will grow in many soil types, but ideally the topsoil is at least 12 inches deep and not stony, shallow or waterlogged. Toxins in cassavas are typically higher in dry conditions and poor soils.

Keep the soil moist in the first month of planting to give the stems a good start. If the cassava plant loses a lot of leaves it’s likely it’s not getting enough water. Cassava is drought resistant, but water well and it will produce more roots of better quality. Don’t allow the soil to stay soaked, though, as this may cause the roots to rot.

Cassava is typically grown in tropical lowlands and requires at least 8 months of warm weather to mature. It likes full sun and requires temperatures ranging from 77 to 81 degrees Fahrenheit and at least 19.6 inches of rain annually. Cassava will not tolerate frost, so it grows best in a greenhouse or with cold frame protection in cooler areas.

Fertilise the soil around the cassava stalks two months after planting. Apply a 46-0-0 fertiliser according to manufacturer's specifications. Keep the fertiliser at least 6 inches from the stalks to prevent burn.

Without pruning, your cassava plant could begin to look rather leggy and straggly. If you are regularly harvesting for the leaves, it will be unlikely it will grow beyond 4 feet tall, but the plants can reach over 10 feet.

Cassava is hardy and isn't bothered by too many pests and disease, but as with all plants, they’re susceptible to some issues.
Aphids suck the sap from your cassava plant and in big enough numbers can cause it to become weak and wilted. Give the cassava plant a good blast of water to remove the aphids and then apply neem oil once a month for three months.
In small or large numbers, locusts are deterred by neem oil. If you live in an area where locusts are present, treat the cassava plant monthly.
If you have bacterial blight, you’ll see spots start on the leaves and they’ll slowly rot or at least go from a healthy, deep green to yellowish. The best treatment is prevention. Ensure all stems planted show no signs of blight. If you see blight, cut it out and avoid watering the leaves.
A rare but devastating disease, cassava mosaic disease causes curling of the plant’s leaves. You’ll also see mottling and twisted leaves. This causes a lack of root formation and a reduction in harvest.
Cassava scale is a tiny, white mussel-shaped scale that sucks the juice from plants. You’ll often notice a powdery white secretion on your cassava stems. A heavy infestation can kill a plant. Keep plants well-watered and healthy so they can withstand an attack. Destroy infected plants and encourage beneficial insects.
If your cassava has root rot, you’ll notice drooping, wilting leaves that may fall off the plant. Roots will be soft and rotting. Root rot appears when the soil is too wet causing the root of the cassava plant to rot. This means the plant can’t absorb nutrients from the soil and will wilt and eventually die. 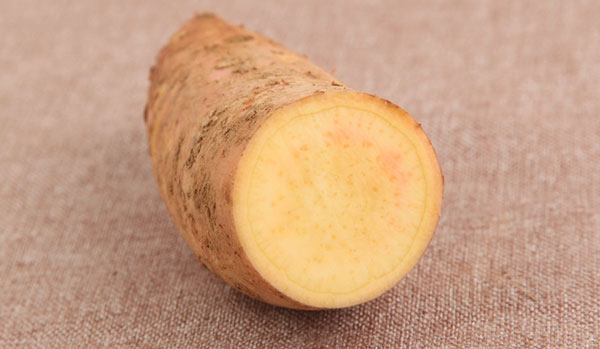 Sweet doesn't mean its higher in sugar, it means it contains less cyanide and requires less processing to remove it. This type generally has higher yields.

Recommended sweet varieties include: Bitter Cassava
Bitter cassavas have much higher levels of cyanide and therefore require complicated processing to remove it. For home and smaller crops, sweet cassava is best. 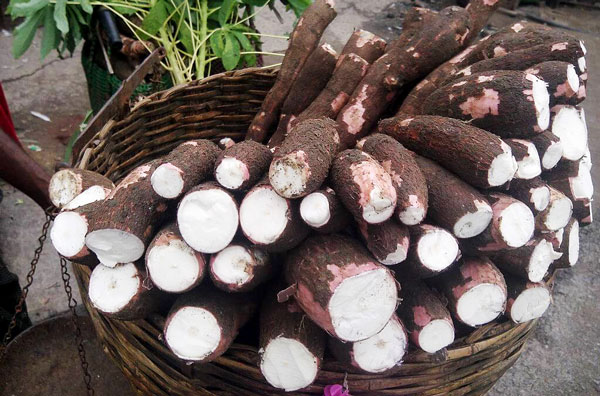 Why is cassava dangerous?

Cassava may be dangerous if consumed raw, in large amounts or when it is prepared improperly. This is because raw cassava contains chemicals called cyanogenic glycosides, which can release cyanide in the body when consumed.

What part of cassava is poisonous?

Potential toxicity. Cassava roots, peels and leaves should not be consumed raw because they contain two cyanogenic glucosides, linamarin and lotaustralin. These are decomposed by linamarase, a naturally occurring enzyme in cassava, liberating hydrogen cyanide (HCN).