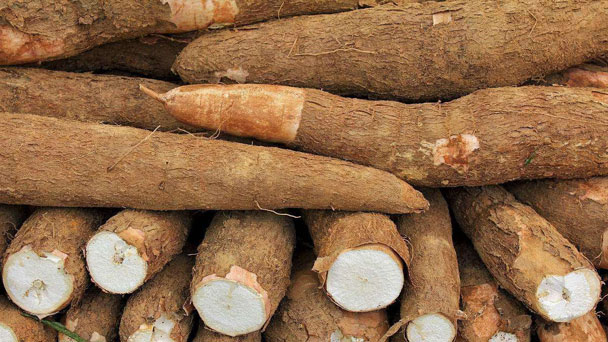 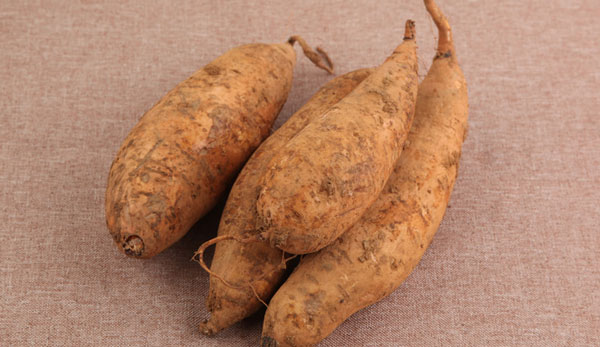 How to Grow and Care for Cassava (Manihot esculenta)

How to Grow Cassava (Manihot esculenta)

Cassava may be planted at any season, but it is better if the soil is always wet in the first 4-5 weeks after planting.
The stem to be planted must be from a matured plant, about a year old, 25 cm long with 5-7 nodes from the bottom stem. The thickness of the stem must not be smaller than half of the fattest part of the stem from where it is cut. If the stem is smaller than this, it will not have much nutrient content with which to start the new plant, so the roots and growths will be small.
Cut the stem crosswise with a sharp bolo. Avoid bruises and breaks, and plant within the week when the stems are cut.
The stems to be planted can last up to 10 days if these are wrapped in a wet cloth or sack and placed in any airy and shady place. If it is not possible to plant immediately, these will still grow within a month if it is sprayed with any of the following before storage: Orthocide or Daconil, Manzate, Dithane, Demosan, Brassicol, Visigran, or Agallol.
It should be stored in a shady, humid or cool place with temperature between 20-30°C.

How to Care for Cassava (Manihot esculenta)

Although cassava plants produce their best harvest if they get extended exposure to sunlight, intense direct sunlight can cause leaf burn. Cassava will grow in many soil types, but ideally the topsoil is at least 12 inches deep and not stony, shallow or waterlogged. Toxins in cassavas are typically higher in dry conditions and poor soils. Keep the soil moist in the first month of planting to give the stems a good start. If the cassava plant loses a lot of leaves it’s likely it’s not getting enough water. Cassava is drought resistant, but water well and it will produce more roots of better quality. Don’t allow the soil to stay soaked, though, as this may cause the roots to rot. Cassava likes full sun and requires temperatures ranging from 77 to 81 degrees Fahrenheit and at least 19.6 inches of rain annually. Fertilise the soil around the cassava stalks two months after planting. Apply a 46-0-0 fertiliser according to manufacturer's specifications. Without pruning, your cassava plant could begin to look rather leggy and straggly. 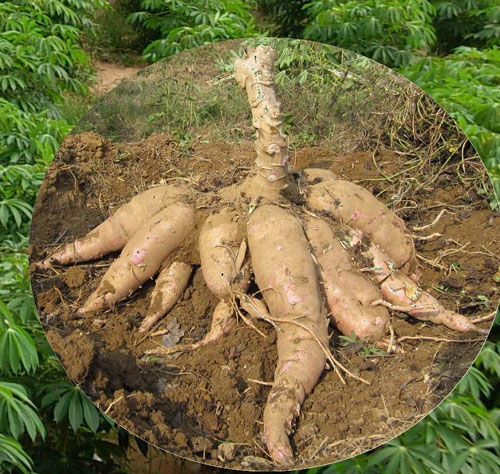 Depending on the variety, harvesting of cassava for food may begin from the seventh month after planting the cuttings for early varieties, or after the tenth month for late varieties. Before this, the tubers are too small. In addition, they still contain too much prussic acid. At harvesting time, that is, between the sixth and the twelfth month, each fully grown tuber of cassava may weigh 1 or 2 kilogrammes, depending on the variety. In small family plantations you can harvest me tubers as you need them. Without cutting the stems, begin by taking the biggest tubers from each plant, leaving the smaller ones time to fatten up. If you are selling to a factory, you must harvest all the cassava at the same time. The production of roots and starch is highest 18 to 20 months after planting.

Once lifted, cassava cannot be kept for long. The roots begin to spoil as soon as they are out of the ground. That is why on a family plantation, you should not harvest more roots than you can eat while they are fresh, or sell immediately. Cassava keeps longer when it is left in the ground, but the soil must not be too wet. 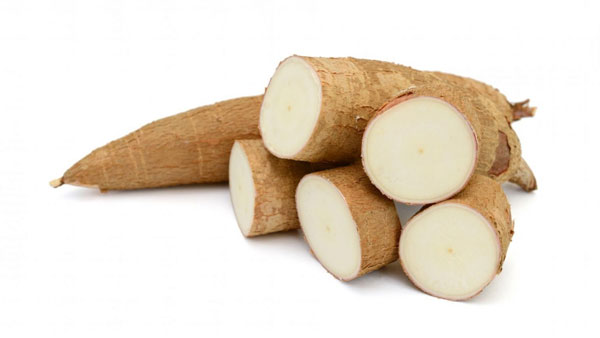 Leaves for consumption can be produced throughout the year if the plants receive sufficient water. The portion eaten is generally the maturing leaves that are just reaching full size. Cassava leaves are NOT EATEN RAW, as they contain harmful glucosides which release deadly hydrocyanic acid. To dispel the poison the leaves must be boiled at least 15 minutes. Cassava leaves contain protein, iron and B vitamins. They are boiled like spinach or added to stews. There are so many useful and easy to grow tropical greens that cassava leaves are not a 'first choice' option. Sweet potato leaves, pumpkin tips, kangkong, ceylon spinach are better alternatives and are easy to eat and prepare.
The roots are more useful as a food plant, they are harvested when the leaves begin to yellow and fall. They are eaten boiled, fried, baked and made into flour. The refined starch from the tubers, known as tapioca pearls, is used in soups, puddings and dumplings. The roots store well. 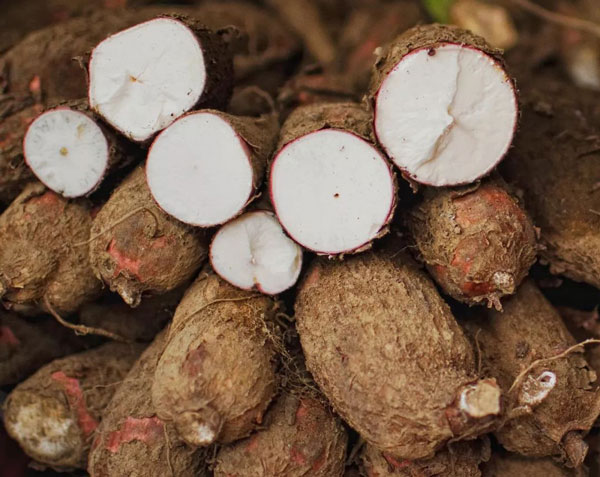 Cassava is hardy and isn't bothered by too many pests and disease, but as with all plants, they're susceptible to some issues.
Aphids suck the sap from your cassava plant and in big enough numbers can cause it to become weak and wilted. Give the cassava plant a good blast of water to remove the aphids and then apply neem oil once a month for three months.
In small or large numbers, locusts are deterred by neem oil. If you live in an area where locusts are present, treat the cassava plant monthly.
If you have bacterial blight, you'll see spots start on the leaves and they'll slowly rot or at least go from a healthy, deep green to yellowish. The best treatment is prevention. Ensure all stems planted show no signs of blight. If you see blight, cut it out and avoid watering the leaves.
A rare but devastating disease, cassava mosaic disease causes curling of the plant's leaves. You'll also see mottling and twisted leaves. This causes a lack of root formation and a reduction in harvest.
Cassava scale is a tiny, white mussel-shaped scale that sucks the juice from plants. You'll often notice a powdery white secretion on your cassava stems. A heavy infestation can kill a plant. Keep plants well-watered and healthy so they can withstand an attack. Destroy infected plants and encourage beneficial insects.
If your cassava has root rot, you’ll notice drooping, wilting leaves that may fall off the plant. Roots will be soft and rotting. Root rot appears when the soil is too wet causing the root of the cassava plant to rot. This means the plant can’t absorb nutrients from the soil and will wilt and eventually die. 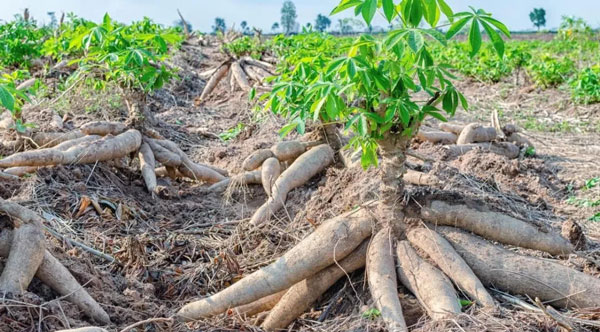 Cassava root contains natural toxic cyanogenic glycoside compounds linamarin and methyl-linamarin. Injury to tuber releases linamarase enzyme from the ruptured cells, which then converts linamarin to poisonous hydrocyanic acid (HCN). It is therefore, consumption of raw cassava root results in cyanide poisoning with symptoms of vomiting, nausea, dizziness, stomach pains, headache, and death. In general, cyanide content is substantially higher in its outer part and peel. While peeling lessens the cyanide content, sun drying, and soaking followed by boiling in salt-vinegar water results in evaporation of this compound and makes it safe for human consumption.
Prolong consumption of monotonous cassava diet may result in chronic illness like tropical ataxic neuropathy (TAN) and diabetic mellitus, especially among rural and tribal inhabitants who are engaged in processing and consumption of exclusively cassava products.