When Do Hollyhocks Bloom - Do It Bloom the First Year?

In this guide, we can learn more about When Hollyhocks bloom and how to take care of different types of Hollyhocks.

A member of the hibiscus family, the hollyhock is also referred to as Althea rosea. Despite being a native of China, the flower has been widely cultivated for its exquisite blooms.

The Hollyhock is a long-blooming summer bloomer with numerous flowers on tall spikes. hollyhock flowers are racemes with single or unripe petals. They come in a variety of colors from whites, yellows, pinks, reds, lavender to midnight purple almost black. Blossoms are 2 to 5 inches across.  Generally, Hollyhock will bloom the first year if growing from cuttings. If it is propagated from seed, it will not bloom until the next year. With proper maintenance, its flowering period can be extended. For more hollyhock blossoms, pinch out the growing tips once or twice early in the growing season. This will result in shorter plants with more flowering stalks. Here are hollyhock care tips for more blossoms and a longer flowering period. Hollyhock flowering takes a lot of nutrients, so we can give hollyhock abundant fertilizer a month before flowering. The thin phosphorus fertilizer is given priority, thus can promote more hollyhock blossoms. When flowering, reduce the concentration of phosphorus fertilizer appropriately and apply potassium dihydrogen phosphate every other month. Hollyhock plant loves to grow in a wet environment, especially in the flowering stage. Adequate water supply to hollyhocks can promote flowering. Therefore, we can water it every 3 days or so in the flowering stage, and drainage measures should be taken in the rainy season. Although the heat resistance of the Hollyhock plant is very strong,  the opening flowers are more delicate and charming. The temperature is controlled at about 25℃, Hollyhock flowers bloom vigorously in such an appropriate temperature environment.
Read Next:

Better Homes & Gardens states that hollyhocks can grow to a height of up to 8 feet. The Missouri Botanical Garden states that the native to Ukraine Russian hollyhock (Alcea rugosa, zones 4-8) can grow up to 9 feet tall. There are varieties that have both single and double blooms. 'Indian Spring' hollyhocks, which have a single bloom and are available in white, pink, and yellow (Alcea rosea 'Indian Spring', zones 2–10), are another choice. The 'Peaches 'n Dreams' hollyhock (Alcea rosea 'Peaches 'n Dreams' zones 2–8) is one of the cultivars with double blooms.

A few varieties of hollyhocks are annuals, meaning that they bloom the year after they are planted. One illustration is the "Queeny Purple" hollyhock (Alcea rosea "Queeny Purple," zones 2-10), which according to All-American Selections will produce a lot of flowers in its first year if seeded in February or March. May will be the blooming month for March plantings. 'The height of the Queeny Purple cultivar ranges from 20 to 30 inches. 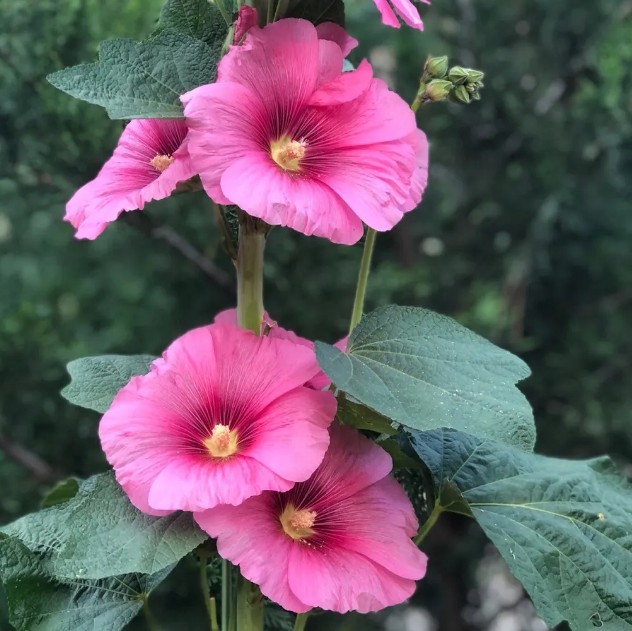 Hollyhocks are a fantastic choice for planting in borders or up against walls and fences because of their tall stature and large, up to 5-inch wide flowers. They flourish in full sun, which is defined as six hours or more of sunlight each day. Tall cultivars of hollyhock may require staking in windy areas. Although hollyhocks don't care much about the type of soil they are in, they do need good drainage, especially in the winter.

Hollyhocks, both annual and perennial, bloom from June to August. Growing hollyhock seeds in August or September is advised by the Missouri Botanical Garden. It is best to sow hollyhock seeds directly into the garden because their long, delicate taproot can make transplanting challenging. Plants should be spaced between each other 12 to 18 inches, according to South Dakota State University Extension. Due to its propensity to self-seed, it should be noted that Alcea rosea is regarded as an invasive species in some regions of the United States.

In order to increase the likelihood that your hollyhocks will continue to bloom after their second year, the South Dakota State University Extension suggests removing spent blooms as soon as possible. By doing this, the plant won't waste energy on producing seeds. Nevertheless, according to Cornell University, you might prefer to let hollyhock seeds grow and multiply because, once the plants are established in the garden, they will have the appearance of perennials.

According to the University of Wisconsin-Madison Division of Extension, rust, a fungal leaf disease that spreads easily and can stunt plants and cause leaf drop, is a problem for hollyhocks. Yellow spots on the lower leaves are the first thing to notice. On the undersides of leaves, raised red lesions inevitably appear. Keep the leaves dry and promote good air circulation to stop rust from growing on your hollyhocks. Additionally, you should avoid using infected plant seeds and keep hollyhock beds free of weeds.

When to Plant Hollyhock

Hollyhock plants typically take one year to mature from seed. For blooms the following summer, plant hollyhock seeds in the late summer. If you want to start any transplants indoors, you can also postpone it until late winter or early spring.

Where to Plant Hollyhock

Hollyhocks grow best in areas with full sun to partial shade and good drainage. However, because hollyhock plants frequently reach considerable heights, they must be supported by a trellis, wall, or fence to prevent damage from wind. Keep in mind that hollyhocks easily self-seed, so try to plant them in an area where this won't be a problem. (Read More: Where to Plant Hollyhocks)

How to Plant Hollyhock

Hollyhocks are simple to grow from harvested seeds, whether you intend to grow them indoors or outdoors. Make sure to sow your seeds outdoors about a week before the last frost and to space them about two feet apart from one another. Since hollyhocks have long taproots, it's important to use tall, individual pots when starting them indoors and to transplant the bulbs as soon as possible to prevent any damage.

How to Care for Hollyhocks

Hollyhock maintenance can be relatively easy, but once established, they need to be watched carefully because they spread quickly.

Rich, well-draining soil is ideal for planting hollyhocks. Make sure to water the plants frequently and keep the soil moist when starting hollyhocks. However, once they have started to grow, these plants may be drought-resistant. To avoid wetting the foliage, which could result in diseased leaves, keep watering them from below.

When it comes to pruning, hollyhock flowers can be removed as soon as they begin to fade and their stalks can be pruned after flowering. It will aid in reducing the formation of seed heads and subsequent reseeding. Leave the flowers alone until the seeds have fallen if you want seed sets for the following season. To avoid rust disease after the winter, remove all stems and leaves.

Do Hollyhocks Bloom Every Year?

Since hollyhocks are perennials that self-seed, the majority of them will grow back every year. This might alter, though, depending on the hollyhock variety. Some hollyhocks are biennials, which means that they will go through their entire life cycle in a two-year cycle. The other hollyhock plants are annuals, so they only bloom once.

How Long Do Hollyhocks Take to Grow?

Within 12 to 21 days of sowing, seedlings of the majority of hollyhocks will appear.

Do Hollyhocks Need Sun Or Shade?

Hollyhock plants require full sunlight and soil that drains well in order to grow their flowers in the best conditions.

Hollyhocks typically grow as biennials or transient perennials. In order to replenish their patch, they are typically permitted to self-sow. Hollyhocks can grow in number, just like almost every plant that self-sows.

Try to plant them where there is plenty of room, but bear in mind that these plants have the potential to get quite large. If you make the commitment to have them, you'll probably spend more time trying to keep them under control than fostering their growth.

Do You Deadhead Hollyhocks?

While deadheading hollyhocks is not required, it is a good idea, as it is with most plants. You can prolong the season's blooms on hollyhocks by deadheading them, and you can also keep your plants looking neat and orderly. By deadheading your hollyhocks, you can reduce reseeding while also encouraging them to produce more flowers.

Can I Plant Hollyhocks in Pots?

Are Hollyhocks Poisonous to Dogs?

If dogs consume hollyhocks, they are not thought to be poisonous. Pets and people alike, however, can develop dermatitis from touching them. These plants have the potential to cause allergic or contact dermatitis, both of which can cause mouth or skin irritation. Wash your dog with a mild shampoo and give it a water mouth rinse if you think it may have gotten into hollyhocks or eaten some.
Read More: Are Hollyhocks Poisonous to Cats & Dogs

How to Propagate Common Hollyhock Flower

How to Propagate Hollyhock Flower

How to Grow and Care for Hollyhock Flower

Hollyhock Flower Care: How to Grow & Care for Hollyhocks

Where to Plant Hollyhocks

​​How to Harvest Hollyhock Seeds

How to Grow Hollyhocks from Seeds Step by Step