Hollyhock Flower Care: How to Grow & Care for Hollyhocks How to Grow Hollyhocks from Seed

How to Harvest Hollyhock Seeds

Hollyhock is usually a biennial herb. The leaves grow in the first year, flowers bloom and seeds form in the second year. If growing conditions are proper and the plant is adaptable, Hollyhock can often live for more than two years. In some climates, Hollyhock is more like a short-term perennial. If you plant hollyhock seeds indoors, or if you live in an area that promises a long growing season, your Hollyhock may produce beautiful flowers in the first year after planting. Hollyhock is capable of self-seeding and producing a large crop of its own next year. You can also harvest the seeds in the fall when they are ripe. Read More: How to Harvest Hollyhock Seeds

Hollyhocks are easily started from seed indoors or out. Seeds can be sown directly outdoors about a week before the last frost. Autumn is a good time to plant hollyhock seeds indoors. You can plant the seeds in October or November and keep them growing indoors through the winter, so you might see Hollyhock blossom in the spring. Read More: When to Plant Hollyhock Seeds

Where to Plant Hollyhock

While Hollyhock can adapt to a wide variety of climates and environments, the plant is sure to thrive if the conditions necessary for its growth are met.
Find a sunny spot. Hollyhock can tolerate part shade place, as long as it gets at least six hours of light a day, though its flowers may be smaller and less brightly colored.
Find a place of cover. Hollyhock is far taller than most of the plants in the garden, so they are the first to suffer when it rains or blows. To protect the Hollyhock from the weather, it is best to plant the Hollyhock near a wall or in a corner of a fenced garden. You can also plant the Hollyhock with other plants of similar height. Read More: Where to Plant Hollyhocks 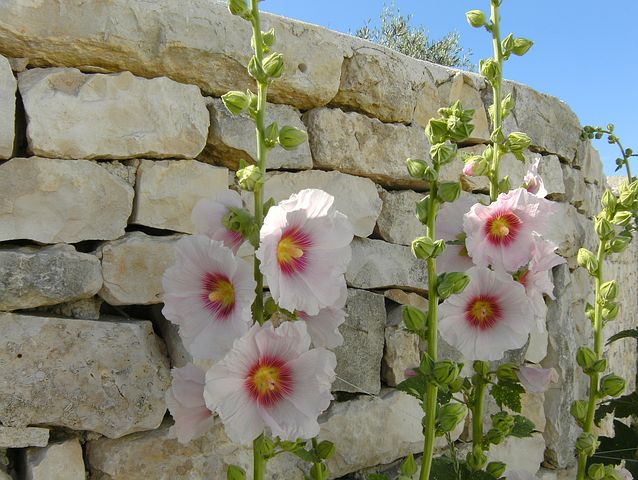 How to Plant Hollyhock Seeds

The Hollyhock seeds are washed before planting, soaked in warm water, dried and disinfected before planting. Plant the seeds in a tray covered with sandy soil. Hollyhock seeds are large and have a high germination rate, so it's best to plant each seed separately. How Deep to Plant Hollyhock Seeds? Planting depth between 0.5 and 1 cm is advisable, and each Hollyhock should be kept between 30 and 60 cm apart. Place the tray next to a sunny window. Water properly to keep the sand moist. Hollyhock seeds usually germinate after 1 to 2 weeks.
If you plant in the fall, you'll need to plant the seedlings in a pot between 10 and 15 centimeters in diameter. Keep pots indoors in a sunny spot so plants can continue to grow throughout fall and winter.
The next spring, when the frost is over and the soil temperature reaches 10 ° C or more, the Hollyhock canl be transplanted outside. If you didn't plant your seeds indoors earlier last fall, it's not too late to plant them outdoors.
Read Next:
How to propagate hollyhocks
How to Grow Hollyhocks from Seed Step by Step

Hollyhock plant prefers a sunny environment and tolerates half shade. Usually, Hollyhock should be placed in direct sunlight to receive full sunlight. In summer, due to strong illumination, Hollyhock should not be exposed to sunlight as far as possible, so as not to affect the growth of the plant. Instead, it should be appropriately shaded and absorb scattered light. 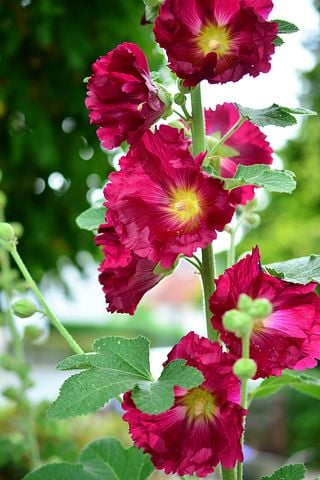 All plant is inseparable from fertilization. It should be noted that applying fertilizer during the seedling growth period of Hollyhock, when the Hollyhock roots are not fully developed and cannot normally absorb nutrients from the soil. At this time, appropriate fertilization can improve the survival rate of Hollyhock seedling.

After the Hollyhock blooms, it is timely to cut off the ground to allow new shoots to sprout. In order to make the plant dwarf, root cutting can control the height of the plant. That is, in the growth period of the plant,  cut root at the left and right sides of 10 cm. Carry put the same operation after2-3 weeks. The more times you cut the roots, the shorter the plant will be, making it suitable for potting.

After blooming, Hollyhock first needs to remove the failed flowers. Meanwhile, some branches at the bottom of the plant need to be pruned, often weak or withered branches. The branch that does not blossom can be cut off directly, avoid the excessive loss of nutrient. The blossoms quality of the branches growing more than two years can abate, which also can undertake to prune properly.

Hollyhock rust is easy to occur in old and perennial Hollyhock plants. Leaves of infected plants turn yellow or die, and brownish and powdery spores can be seen on the back of leaves.
Prevention & Treatment: 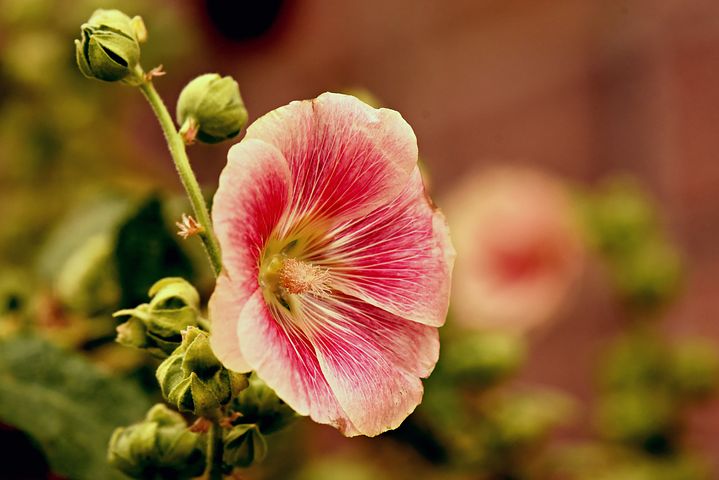 Red spider infestations may happen during the Hollyhock plant growth.
Prevention & Treatment:
When serious, Spray with 1.8% avermectin emulsion 7000 to 9000 times liquid; Or the use of 15% pyridonidine emulsion 2500 to 3000 times the liquid have a better prevention and control effect. Avoid using dichlorvos to kill mites, dichlorvos has the effect of stimulating the proliferation of mites. Do not use inulin pesticides, which are basically ineffective for mite control

Hollyhock plant white spot is mainly harmful to the leaves of Hollyhock. At the beginning, there are small brown spots on the leaves of Hollyhock plants. With the development of the disease, the spots gradually expand to round, oval or irregular shapes, with gray-white in the center and reddish-brown in the outer edge. In a humid environment, there can be a gray-brown mildew layer on the spot.
Prevention & Treatment:

Hollyhock leaves and flowers are edible, and the skin is high-quality fiber. The whole Hollyhock plant can be used as medicine, which has the effect of clearing heat and detoxifying, relieving cough and diuresis. The root can be used as a lubricant for mucous membrane inflammation, protection, easing the role of stimulation. Anthocyanin extracted from flowers can be used as a colorant in food. Stem skin containing fiber can be used instead of hemp.

Hollyhock flower is very beautiful and bright in color, giving people a fresh feeling, which is very popular. hollyhock flower is especially suitable for planting in the good environment of yard, road side and site layout. It can form the flourishing hedge, flower wall, beautification garden environment. Bring a kind of gentle feeling to the owner of the hedge, flower wall.
There are many horticultural varieties, and many excellent varieties have been cultivated worldwide. It is suitable for planting beside buildings, rockery or flower beds, lawns, in rows or clusters.
Dwarf hollyhock varieties can be potted flowers, displaying in front of the door. It can also be cut and used as cut flowers for vase or flower basket or bouquet. 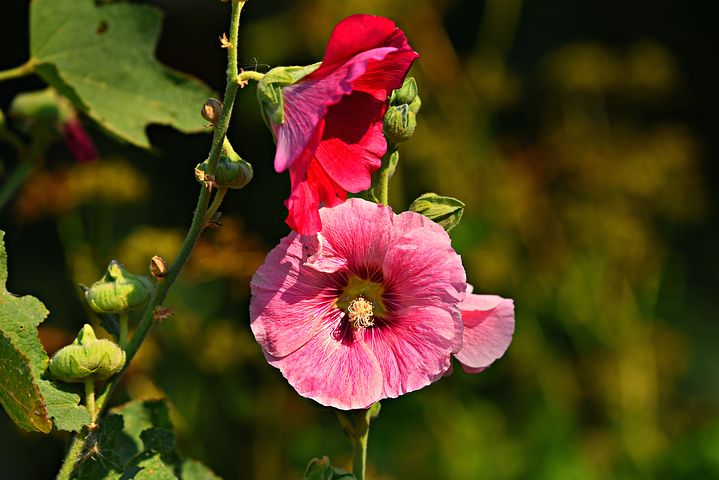 Is Hollyhock a Perennial or Annual

Hollyhock is usually a biennial herb. The leaves grow in the first year, flowers bloom and seeds form in the second year. If growing conditions are proper and the plant is adaptable, Hollyhock can often live for more than two years. In some climates, Hollyhock is more like a short-term perennial.

The young leaves, flowers and young seeds of Hollyhock are edible. Hollyhock plant roots contain sugar and alcohol substances, flowers contain anthocyanins, red pigments, glucose and Hollyhock ii, and seeds contain fatty oil. General pick young leaves in spring. After blanching in boiling water, the leaves can be fried to eat. Tender leaves and flowers can be eaten, the skin is high-quality fiber, and the whole plant is used as medicine, which has the effect of clearing heat and detoxifying, relieving cough and diuresis. Anthocyanin extracted from flowers can be used as a colorant in food.

There are several reasons for hollyhock leaves turning yellow. 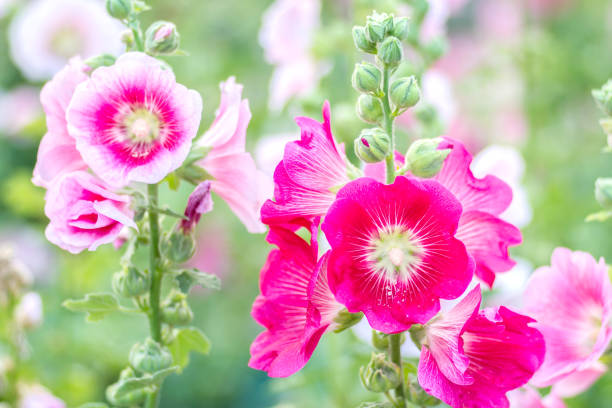 Hollyhock seeds can be sown in autumn or spring. Sown in autumn, the hollyhock plant will bloom the next year. Sown in early spring, the hollyhock plant can bloom in the late summer in the same year.
This is because the seedlings must grow to a certain size and through low temperatures in order to bloom in the current year. The different variety characteristics and the environment after transplanting also had a great influence on whether the seedlings could blossom in the same year. After transplanting, the Hollyhock seedlings with sufficient light could blossom in the same year, while those with insufficient light could blossom late or not.
Read Next: When Do Hollyhocks Bloom

Cut down most of the plant, leaving only a small section near the ground, and cover it with bedding to help the hollyhock plant survive the winter. Some people like to leave stems more than 10 centimeters long and cover them with soot. Soot keeps moisture out and prevents snails or slugs from attacking plants.

Is Hollyhock Poisonous to Dogs

Hollyhocks aren’t noted as being poisonous to pets when ingested. However, the stems and leaves can cause skin irritation when the small glass-like fibers on them are touched or brushed against.