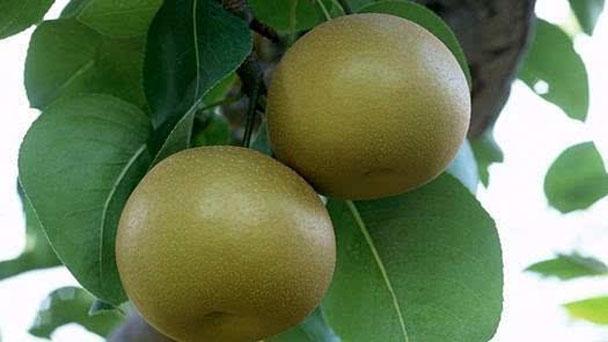 Where to Grow Asian Pear Tree

Asian pear tree (Pyrus pyrifolia) grow best in deep, well-drained soils with an optimum pH of 6.5. Pears, unlike peaches and many other stone fruits, can tolerate soils with high clay content; however, production and longevity is greater in soils that drain well and are not waterlogged.
Other helpful site characteristics for pear production are elevation and air drainage. Spring freezes can eliminate crops in frost-prone areas. Planting the orchard on a high site with good air flow can decrease the probability of frost damage. Cold air will flow downhill until something impedes its course. Removing barriers such as overgrown fence rows and tree lines can lead the cold air to settle in the lowest areas, helping protect the sensitive blooms.  Good air flow in the orchard also allows the leaves to dry quicker, reducing the humidity and disease incidence that thrives in wet conditions. 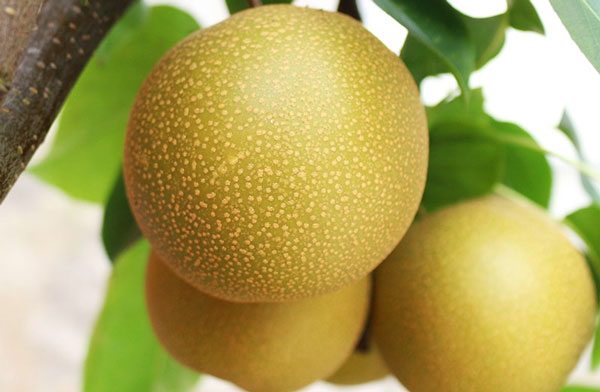 Asian pears trees tend to be weak growing and need to be propagated via grafting of scions, or cuttings.

Regardless of whether you take softwood or semi-hardwood, you'll need to measure a section that begins at the tip of the branch and reaches about six to eight inches back along the stem.
Cut it away from the tree with the pruning shears. You'll need to take at least three to six cuttings as not all will necessarily be successful. If you can, take them from two different cultivars.
Next, trim off all the leaves and any buds present on the bottom two-thirds of the cutting. New roots will actually grow from the leaf nodes.
Gently scrape off the outer bark along the bottom inch or two of the stem and around the leaf nodes, and then dip the bottom portion into your powdered rooting hormone or cloning gel.
Immediately afterward, make a hole in the potting medium and gently place the cuttings into their clear plastic cups and set them on your seed starting tray.
Place the humidity dome over the top of your seed starting tray and set it on your heat mat, if using. Make sure the location you select receives at least six to eight hours of indirect sunlight every day and an average temperature of 70-75°F.
Maintain the heat mat at a temperature of 70°F and mist the branches twice a day. Water the potting mix daily, keeping it moist but not soggy. The humidity dome should remain on at all times to prevent the exposed portion of the stem doesn’t dry out.
It can take a while for the cuttings to form roots: from a few weeks to a few months. So be patient, and keep those little pear tree hopefuls warm and moist for as long as you need to. 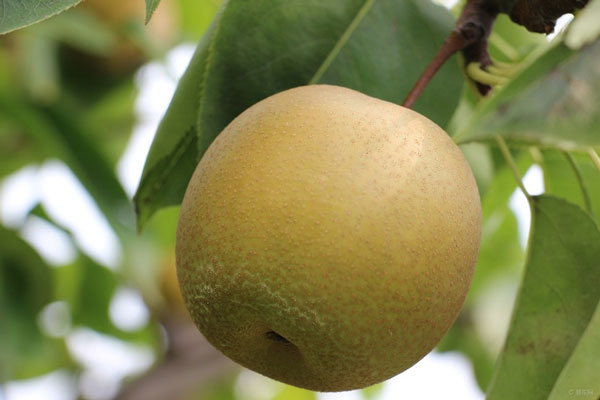 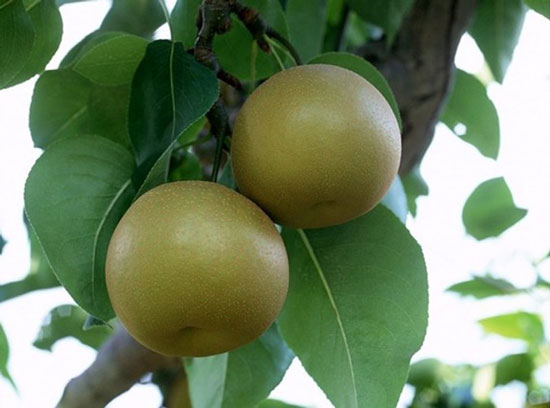 How to Care for Asian Pear Tree (Pyrus pyrifolia)

Asian pears should be planted in the full sun. Avoid planting in wet low lying areas or frost pockets. They are very early blooming so choose a sheltered area away from late frosts or cold snaps. A hillside or area with good air circulation is recommended.

Asian pears like well-drained loamy soils with a pH between 6.0 and 7.0. Trees will survive in nutrient-poor soils, but they will not produce as expected. Adding organic matter can help add nutrients and improve the soil structure. Trees will not survive in saturated or poorly drained soil conditions. Planting in a raised mound or bed is a good solution to overcoming drainage concerns.

Water the Asian pear tree (Pyrus pyrifolia) well as soon as you plant it. Water the tree at least once a week for the first year after planting. A slow, root-saturating, one-hour trickle once a week is recommended for a new tree. The watering schedule should be adjusted accordingly if it rains or is very dry.

Asian pear trees are cold-hardy, and they actually need a chill period over the winter where temperatures are below 45 degrees Fahrenheit for at least 50 to 70 days. Otherwise, they won’t produce blossoms and fruits as profusely. They also require summer heat to develop their fruits. However, make sure their moisture needs are being met, especially in very hot weather. A moderate humidity level is ideal.

Asian pears are partially self-fertile. In other words, they will produce some fruit on their own, but will produce more fruit if additional Asian pears are planted nearby. European Pears and Asian pears can pollinate each other as long as the varieties you choose bloom at the same time. Mason bees can also be used to improve pollination.

Asian pear trees have a habit of producing way more fruit than the tree can support. Remove excess fruit when they are still small. This will redirect the plants energy into the remaining fruit – thereby improving size and quality.

Because vigorous growth is more susceptible to fire blight, fertilizer should be applied only in limited amounts. The pre-plant soil test should indicate if deficiencies of phosphorus, potassium, and pH problems exist and should be remedied before the trees are in place. If cultivars are susceptible to fire blight, little or no fertilizer should be applied. After growth begins for first year trees, ½ cup of 13-13-13 should be spread in a circle about 6 inches away from the trunk. For the first four seasons, increase the amount by ½ cup each year and then continue with about two cups each year thereafter. 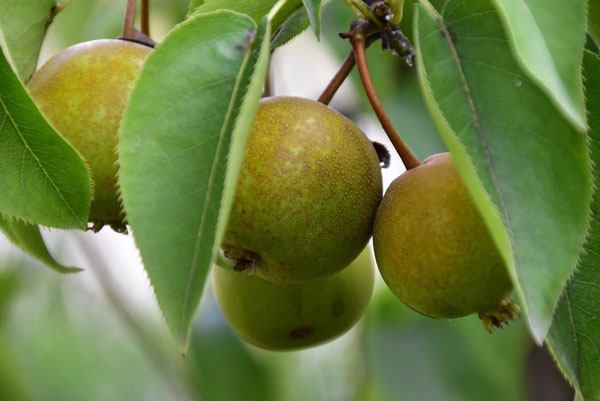 Pears are arguably the most attractive of all fruit trees. They will naturally form a well balanced shape. And when they bloom, fruiting pears have a beautiful, white show of flowers in the early spring.
First year pruning sets the eventual shape of the tree. If your tree is taller than 4-5′ above ground, after it’s planted, trim it down to that height. Pick out the dominant branch that is the most vertical at the top of the tree. This will be your central leader. Thin out the inward growing branches and any branches which are crossing over each other. Trim off the tips of the larger branches to encourage growth. See the illustration below for a before and after look at the branches.
Any shoots or branches which come from BELOW the “bud union” should always be pruned now and in the future. Brand new stems that grow out of the ground, from the root systems are called suckers. If you see them, simply cut them off at ground level. When the asian pear tree (Pyrus pyrifolia) matures, suckering usually diminishes.
If your Asian pear trees (Pyrus pyrifolia) set fruit this first year, pick off some of the immature fruits, spacing them about 8″ apart on the branches. This will encourage proper ripening, allow the spray to cover well, and improve vegetative vigor. Fruit thinning in the future is also important for the very same reasons. Less is more. If you don't thin, you will get many more fruits than the Asian pear tree can handle, resulting in broken branches and small fruits. So don't be afraid to thin. The resulting fruits will be fuller and much nicer.
In later years, you should continue “shape” your Asian pear tree (Pyrus pyrifolia). asian pear trees are best trained to a central leader (uppermost upright limb). This is the natural way your Asian pear tree will want to grow. Pruning will keep your Asian pear tree vigorous, encourage the establishment of fruit buds and enable you to keep your Asian pear tree down to a manageable size.
It is generally best to prune pear trees when they are dormant. Summer pruning is helpful to retard growth of the Asian pear tree. So if the tree is growing very aggressively and getting taller than you like, take it back in July to control this growth.

There are two major plant pests to watch for when you’re growing Asian pears.
Codling Moth
The first is the codling moth (Carpocapsa pomonella), which eats through the fruit to get at the seeds, rendering it inedible. Codling moths lay tiny translucent eggs on the leaves. The larvae have black heads and white bodies.
If you happen to spot eggs or larvae before they do too much damage, you can try releasing moth egg parasites (Trichogramma spp.), according to package instructions.
You can also spray horticultural oil, on the leaves and trunk to smother unhatched eggs.
Another way to prevent infestation is to space the fruits far enough apart so they aren’t touching, thinning them to one pear every four to six inches on any given branch.
Twospotted Spider Mite
The twospotted spider mite, Tetranychus urticae, is a tiny brownish-green pest that causes damage to foliage and usually only bothers a tree if it is water-stressed.
Keeping your sapling well-watered can help prevent infestations, as can a rotation of miticides, like Bonide Mite-X, and Organocide Bee Safe Garden Spray. There's one major disease that threatens the health of your P. pyrifolia plants. Below, you’ll find out what it is and how to treat it.
Fire Blight
By far the most dreadful disease an Asian pear tree can face, fire blight, caused by the bacteria Erwinia amylovora, destroys any existing fruit and turns leaves to a burnt-crisp color and texture, hence the name.
It spreads easily and can kill entire trees. Early treatment is crucial to the recovery of a plant.
If you notice the telltale shriveled leaves, remove the entire affected branch at least 12 inches below the first infected leaf. Take it far away to be burned or dispose of it in the trash. Dip your shears or pruners in a solution of water and 10 percent bleach to help prevent the spread of the infection. 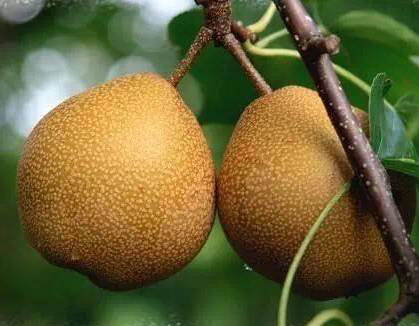 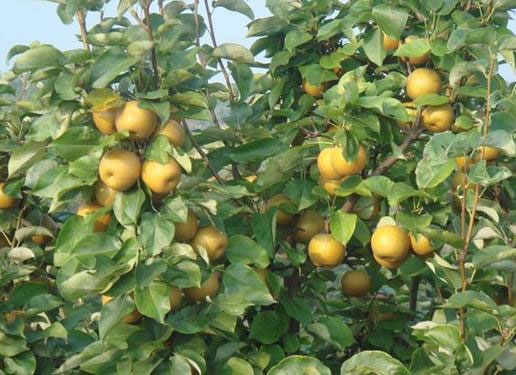 Do you need two Asian pear trees for pollination?

How long does it take for Asian pear tree to bear fruit?

It takes anywhere from 1 to 4 years for the Asian pear tree to bear fruit depending on the variety and the age of the tree you’ve got.

How much does an Asian pear tree cost?

The prices for Asian pear trees vary widely . You can expect to pay anywhere between $30-$120 for an Asian pear tree with the average price being around $60 – but it will depend greatly on where you buy them, as well as what size they are. You’ll pay less at Amazon, Lowes or Home Depot than you would to at an online nursery that specializes in fruiting plants.