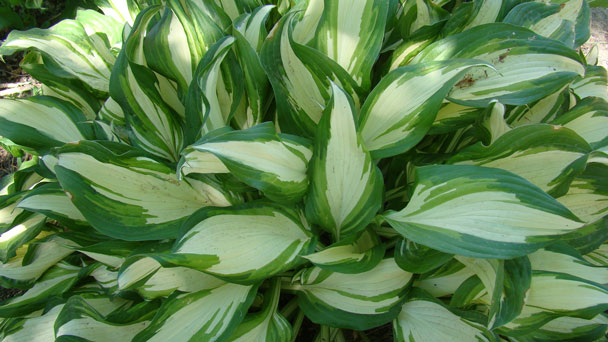 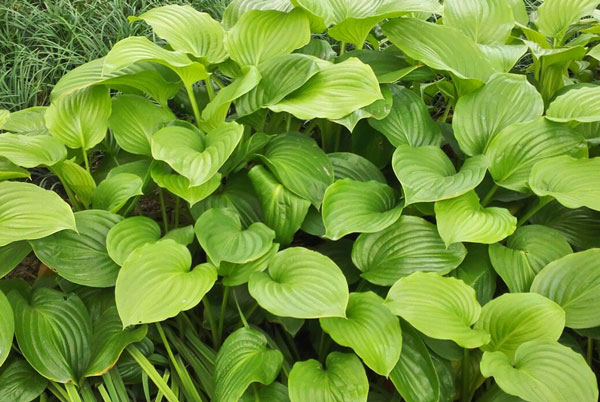 Hosta Halcyon is easy to grow in evenly moist, organic matter rich, well drained soil with partial to full shade. Hosta Halcyon prefer best partial shade (some morning sun or sun-dappled conditions). Established Hosta Halcyon plants have some tolerance for dry shade (especially those with thick leaves), but the soil should never be allowed to dry out. Consistent moisture can best be achieved in full size and mass form. It is best to apply water directly to the soil under the leaves. Divide plants as needed in spring or fall. Division is usually easiest in the early spring, before the leaves unfold. Plant in a windbreak. Hosta Halcyon are generally considered low maintenance perennials.

Hostas originated in the wild amongst the forests in China. But they were brought into gardens by Chinese gardeners before the time of Christ. And from here they spread to other Asian gardeners, particularly in Japan. So ever more beautiful colours and fancy variegations have been bred by gardeners for well over 2,000 years. 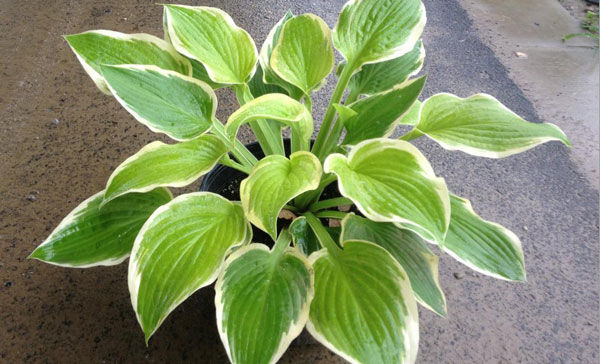 How to Grow and Care for Hosta Halcyon

How to Grow Hosta Halcyon

Seed-raised Hostas very rarely come true to type (except H.ventricosa). Collect seeds in autumn from dry seed heads, sow in Spring and place in a cold frame. Divide clumps every 4 or 5 years in late summer or early spring. Ensure each section has 1 to 3 good buds and trim away damaged roots. Replant at original depth, with the shoots just poking through the soil. Water and apply a granular feed.

How to Care for Hosta Halcyon

Place the Hosta Halcyon where it receives bright, indirect sunlight. Avoid direct sunlight, which is too intense. As with many other houseplants, hosta halcyon appreciate time outdoors during spring and summer, preferably in a somewhat shady location. Hosta Halcyon prefer retentive soil because their natural habitat is amongst the leaf litter under trees and shrubs. So soils from loam to clay based are preferred. Hosta Halcyon also enjoy mulch because Hosta Halcyon are woodland plants. Plants typically take approximately 6 weeks to establish new roots in your soil. During this period, water plants as often as every 2-4 days at the start and at least a minimum of once per week. Hosta Halcyon do quite well in the climate conditions found throughout its hardiness zone. They may wilt in very warm temperatures unless frequently watered, and high humidity sometimes encourages snails and slugs. These plants are sensitive to cold, and will succumb for the season at the first light frost. They do not emerge in the spring until the soil has warmed considerably. Hosta Hostas generally don't require much, if any, feeding, especially if they are growing in good, rich soil. Plants in dry, poor soils will benefit from diluted liquid fertilizer applied over the plants every 4 to 6 weeks. Although it is not essential for containers to be pruned after planting, a light pruning for shape, to remove any broken branches from shipping, or to thin out a heavily branched plant will help in the transplanting process and in the appearance of your new planting.

Halcyon Hosta features dainty spikes of Lavender bell-shaped flowers rising above the foliage in mid summer. Its attractive textured heart-shaped leaves emerge blue in spring, turning bluish-green in color throughout the season. The fruit is not ornamentally significant.

Hosta Halcyon Virus X causes mottled leaf coloring, brown spots, or leaves that appear lumpy twisted. It is spread from one plant to another by contaminated tools or hands, so always clean and sterilize tools. Infected plants should be disposed of, not composted. Learn more from Missouri Botanical Garden.
Hosta Halcyon scorch causes leaves to turn yellow and crispy at the edges. Plants grown in full sun and poor soil are more susceptible. Protect hostas from intense sunlight, especially during the heat of midday and water early in the day. Remove scorched leaves and consider transplanting to a shadier location in your garden.
Frost damage can affect Hosta halcyon plants during early spring. Plants will appear limp and crinkled. If frost is in the forecast, cover your Hosta Halcyon and water well. Remove any frost-damaged foliage as it is susceptible to diseases. Plants will often produce a second flush of leaves after frost damage.
Foliar nematodes are tiny roundworms that invade the tissue of Hosta Halcyon leaves, creating yellow and brown discoloration between leaf veins. Foliar nematodes spread primarily via water, but can also be transferred between plants by unsterilized garden tools. To prevent their spread, avoid overhead watering and sanitize your tools. Infected plants should be destroyed; do not compost. 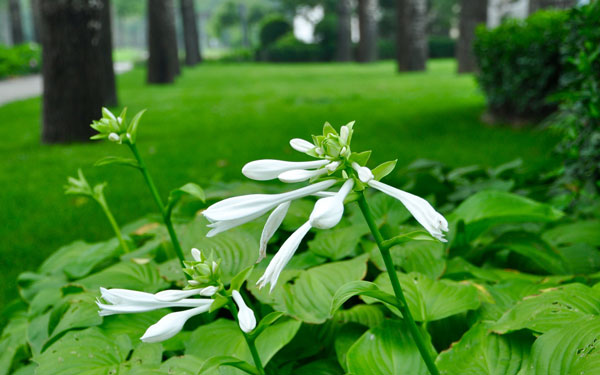 The wide range of sizes among hosta plants inspires a variety of uses, from a striking focal point to edging or ground cover. Hostas contribute the all-important element of texture to a garden, and a collection with varying foliage colors and shapes is visually interesting even without flowers.

Ideas for using hosta plants in your garden:
Bold-leaved hostas provide contrast to lacy plants such as ferns and astilbe, or linear foliage such as sedges or liriope.
Keep things in proportion—supersized Shadowland® 'Empress Wu' will overshadow a small fern.
Pair with summer-dormant plants such as Virginia bluebells to provide long-lasting interest.
Hosta leaves are great additions to a bouquet or foliage arrangements.
Use larger hosta leaves as placemats for alfresco meals.
Hostas with white-variegated leaves or white flowers, like Shadowland® Etched Glass make great additions to a moonlight garden. 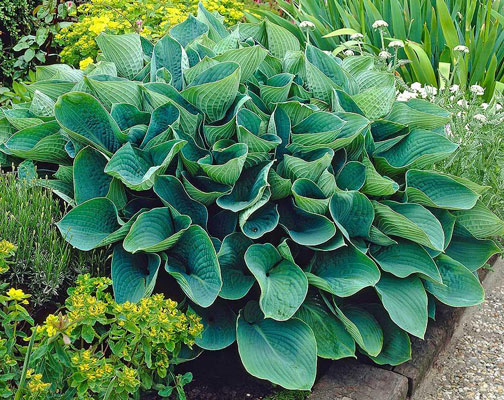