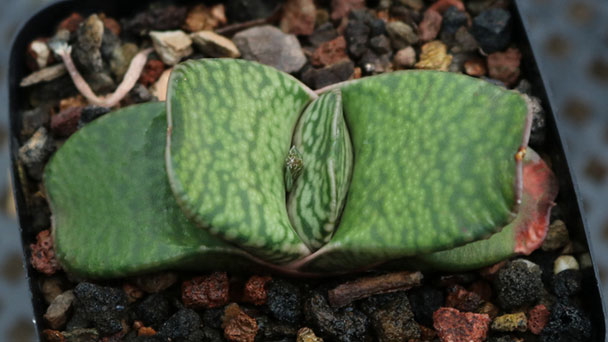 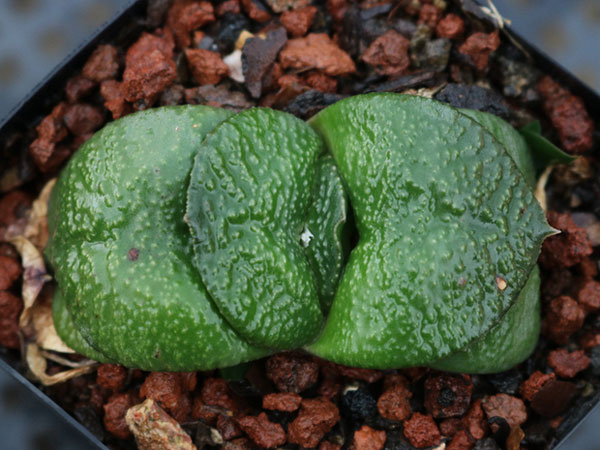 There are also differences in the flowers of gasteria and Aloe.
Ox Tongue plant flowers grow in clusters on the end of a long stem or spike. Aloe flowers tend to grow along the length of the flower spike.
Gasteria flowers are tubular with bulbous, inflated bases. Aloe flowers present a slim silhouette.
In fact, the name of the plant comes from the shape of the flowers, which is rather like the shape of a stomach. The Latin word for stomach is gaster.
Although Gasteria is no longer considered to be in the same genus as Aloe vera, the two plants are related.
Gasteria is also related to Haworthia from South Africa. All three types of Succulents belong to the Family Asphodelaceae.
Along with most Old World succulent plants, these plants belong to the tribe, Aloaceae, along with Astroloba, Chortolirion, Bulbine and Poellnitzia. 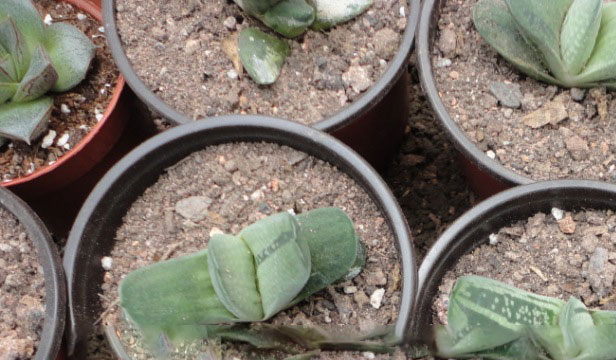 The gasteria species grow in light-colored sandy soils with good drainage. The species can be propagated both by migration and by cuttings (leaf cuttings usually take root easily). They also usually propagate from seed. Germinating usually occurs within eight days, but can take up to a month, depending on the species. Flowering times vary from species to species, but are usually in spring and summer.
Gasteria Succulent Plants distribution area
During 1620-1680 the European interest in South African and Australian flora peaked, prompting many botanical expeditions. Nonetheless, it was only after the turn of the 18th century that Carl Linnaeus collected the first Gasteria specimens. These and other collected specimens made their way to Europe over the coming years. Fast forward several centuries to today’s South African botanists and we are still discovering new species.
Habitat: Gasteria occur on cliff faces and Klein Karoo shrubland. Most of the species are located in the Eastern Cape with some like Gasteria carinata extending into the Western Cape. 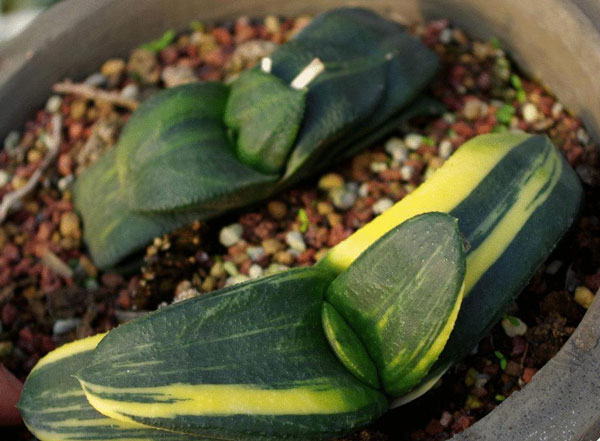 How to Grow Gasteria Succulent Plants

Leaves that are halfway along the vine have the most potential due to its size and maturity. Gently place your fingers between the Gasteria parent stem and the leaf's base, pulling it downwards until you hear a snap. Ensure the wound is wholly intact with no damage, as a bruise or tear will result in unsuccessful propagation. Set the leaf ON TOP OF a bed of moist 'Cactus & Succulent' compost for root growth. Not only will this callus the wound (to prevent disease), but it'll also speed up the propagation process considerably. Once there are signs of small roots developing on the node, place it one third into the compost, at a slight angle. Provide a bright setting with temperatures around 18°C  (64°F)  with the majority of the soil drying out in between waters. New Gasteria leaves should emerge within a month or two, thus signalling the start of its independent life! Using a clean pair of scissors, cut a 10cm (4 - 5 inches) section off the Gasteria stem's end. Be sure to use a fresh, damage or pest-free piece as unhealthy divisions are more likely to fail. Remove the older half of the leaves, so that the stem's lower portion is bare, to speed the process of root development. Purchase a 'Cactus & Succulent' compost and vertically push the cutting's base into the soil, avoiding the risk of covering the actual foliage with soil. Situate the cutting in a bright, indirect setting with temperatures above 18°C (64°F). As the Gasteria roots will develop first, remove the bag and treat it as an adult specimen once there are signs of new foliar development. For this method, it's best to divide Gasteria in spring or summer and once the offshoots are at least a quarter of the mother plant's size. Remove its pot and place your hand in between the junction that connects the two; soil may have to be brushed away to get a better grip. Gently push the pup downwards while supporting the mother plant until you hear a snap. Cautiously separate the root systems, keeping great care in keeping them damage-free. Place the new plantlet in a small pot with a well-draining potting mix, much similar to the original soil, and maintain the same care routines. 'Cactus & Succulent' compost is best, or you can make your own using multipurpose compost with added grit or perlite. Provide a bright setting with temperatures around 18°C (64°F) with the majority of the soil drying out in between waters. New leaves should emerge within the six weeks, as long as the soil is kept on the drier to life.

How to Care for Gasteria Succulent Plants

Give Gasteria plant bright light, but not direct sunlight. These grow in similar conditions to Haworthia succulents. White or yellow leaves usually signify too much sun. Water Gasteria evenly and generously in the summer, letting the soil media dry out between waterings. In the winter, reduce watering to every other month, but do not stop watering. Never allow water to collect in between the leaves. Warmer summers but cool in the winter (down to 50˚F/10˚C). During warmer weather, your Gasteria leaves might turn a lighter, brighter color or the plant might flower with small, colorful sac-shaped flowers. Use a cactus mix or very fast-draining potting soil mixed with sand for Gasteria. Fertilize Gasteria during the summer growing season with a cactus fertilizer. Don't feed during the winter Gasteria are small, shallow-rooted, and relatively slow-growing. They are often grown in small clusters in wide, shallow dishes. Over time, clusters will naturally enlarge as the mother plant sends off small plantlets. When the cluster has outgrown its dish, repot in the spring or early summer into a new wide and shallow dish with fresh potting soil. This is also the time to take offsets for propagation. Cut through the Gasteria stem within 1/2 inch of the desired leaf or node. Make the cut at a 45-degree angle using a clean, sharp knife. Remove up to a third of each stem's length as you prune. For trailing succulent varieties, vary the length of each pruned stem to give the plant more visual interest. 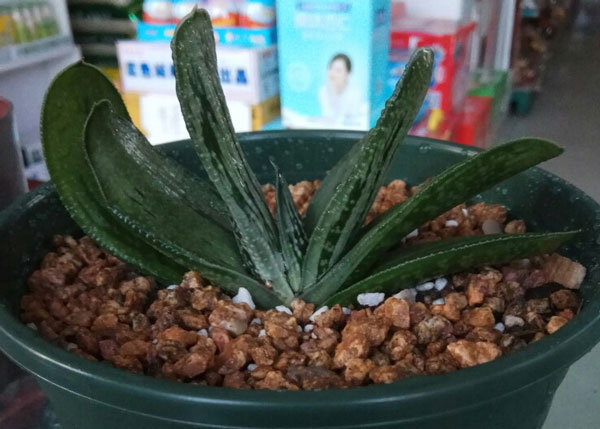 A blooming, green garden in a veranda is not only refreshing, but gives a pleasant look to your house. If you are planning to have Gasteria in your garden, we provide you with all Gasteria uses and Gasteria Facts. If you are a passionate gardener, you should not only know how to take care of your plants but should also know their uses. There are many plants which are used in multiple ways. Uses can be of many types: aesthetic uses, beauty benefits, medicinal benefits, etc. Gasteria Benefits are:
Beauty Benefits: For treating wrinkles and Good for the Scalp
Humans are dependent on Gasteria plants. Directly or indirectly they are a major source of food for human beings as well as animals. Many plants are used for medicinal purposes. Plants absorb carbon dioxide and release oxygen in the air that is used by all living beings for breathing. Therefore, it is very important to know the uses of plants. 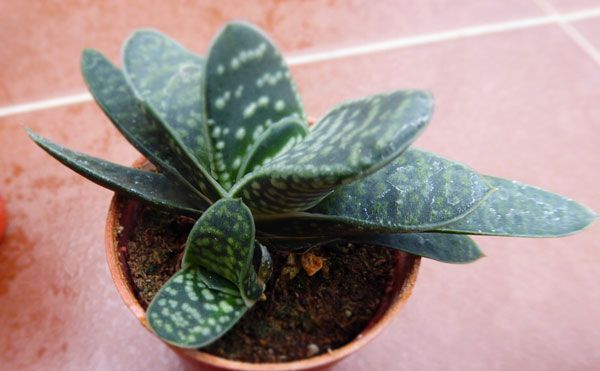 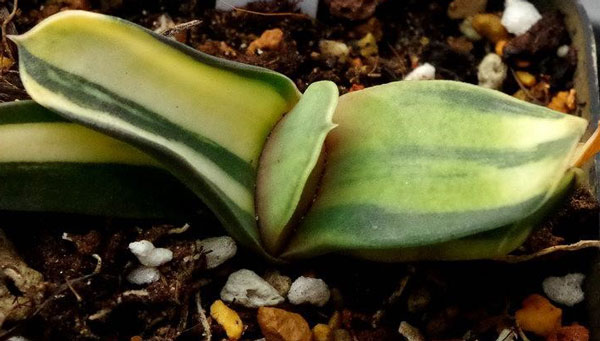 Gasteria plants are susceptible to fungal infections, which usually appear as black spots on the leaves. This is typically the result of too much humidity or water on the leaves. Fortunately, these fungal infections usually don't spread quickly, and can be contained by keeping the plant drier, with more air moving by, and using a fungicidal soap.

How to Grow & Care for Gasteria Succulent