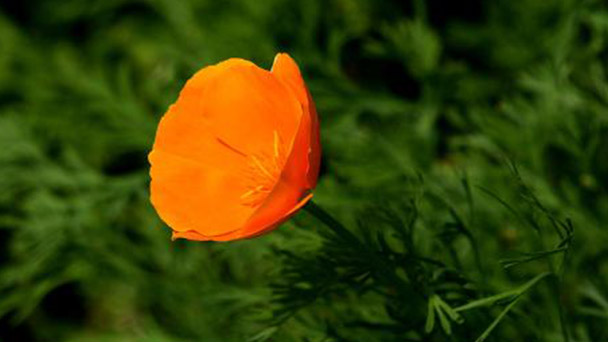 California poppy, scientific name Eschscholzia californica, is a perennial herb, often cultivated for a year or two. California poppy has strong cold resistance, like cold and dry climate, can not resist hot and humid, hot summer in a semi-dormant state, often die, and then germination after autumn. California poppy is originally in California, USA.

California Poppy stems and leaves are bright green and gray in color, making it a good source for ribbons, trails, and potted plants. It can also be used in lawns. 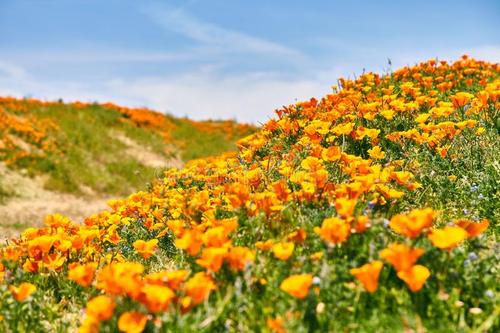 Leaves are alternate, many back to three out of pinnate division, split linear or elliptic, the whole blade has a long stalk. Flowers are solitary branches apical, ca. 5-7 cm in diameter, long pedicels.

Capsule narrow cylindrical, 5-8 cm long, detached from receptacle, 2 petals descending from base upward, with many seeds. The fruit is an angulate capsule, slender 7 to 10 cm, shaped like a rape pod. Seeds are globose or slightly elliptic. The flowers of the same genus as this species are clustered California poppy and curved leaf California poppy.

California poppy grows in grasslands and open areas from 0 to 2000 meters above sea level.

The distribution of California poppy

California poppy is originally in California, USA. It is widely introduced in China as a garden ornamental plant. 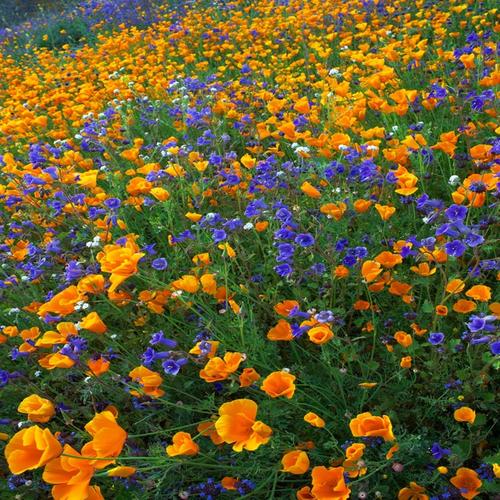 With sowing method propagation of California poppy, winter soil does not freeze the region line autumn sowing. In northern areas, seedlings are raised indoors in early spring and emerge in about 7 days at 15~20℃. In the true leaves to develop in time before the seedling on the pot, no frost, off the pot with soil planting (do not hurt the root, otherwise it is not easy to restore growth.Even death); You can also open the ground before it freezes. With wind barrier protection, the seedlings were unearthed the next year. The seedling stage of California poppy should be supplied with sufficient water and nutrients.To make it grow strong.

California Poppy cutting substrate is used for cutting nutrient soil or river sand, clay clay and other materials. Family cuttings are limited to conditions are difficult to get the ideal cuttings substrate, it is recommended to use the site has been prepared and disinfected cuttings substrate; Medium-coarse river sand is fine, but rinse with clean water several times before use. Sea sand and saline areas of river sand are not used, they are not suitable for the growth of flowers and plants.

(1)California poppy root is fleshy, like monotonous, afraid of waterlogging. In the rainy season, the ground should pay attention to timely drainage, potted plants should be appropriate watering, dry should not be wet, to avoid root neck black erosion.

(2) Because California poppy is a kind of plant with long taproots, it is not resistant to transplantation, it is appropriate to direct seeding seeds in pots.

(3) California poppy sown in spring and flower in summer, but usually grow and flower less well than those sown in autumn. Therefore, sowing should be carried out in August to September, and the suitable temperature for germination is 15-20 ℃. If the germination is not neat, more dense seedlings, appropriate thinning. Planting spacing 20-30 cm, planting to high dry, drainage is better. In California poppy growing season we should pay attention to soil weeding, open winter should take cold prevention measures.

(4) After the skin turns yellow, the fruit of California poppy should be harvested in time in the early morning, otherwise the capsule will crack automatically, leading to seed scattering.

The main value of California Poppy

California Poppy has bright yellow flowers with funnel-shaped or nearly tubular petals. In the domestic often most potted ornamental. California poppy can also be planted.

The sedative and antianxiety effects of California Poppy extract may be related to the activation of benzodiazepine-like receptors, but unlike this class of drugs, the extract has no anticonvulsant or muscle relaxation effects, and its analgesic effect is peripheral rather than central.

Promise me you won't turn me down. 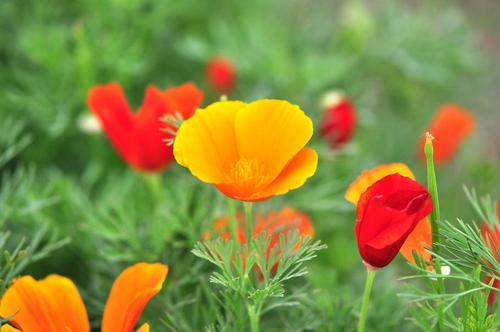 How to propagate California poppy

How to grow and care for California Poppy