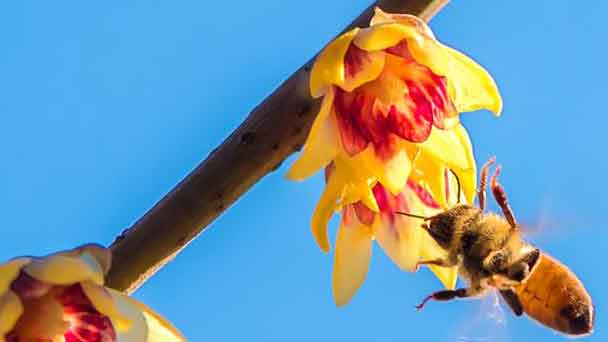 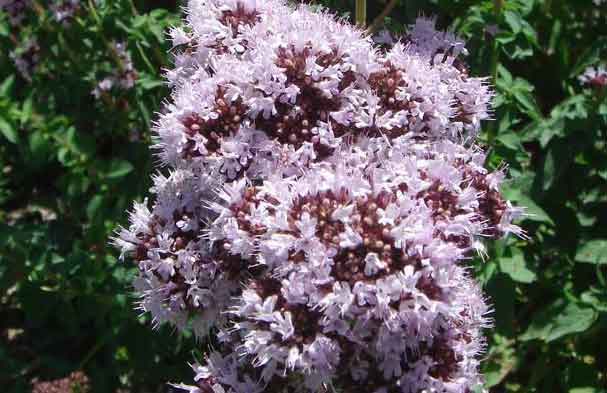 The genus Monarda was named for Spanish physician and botanist Nocholas Monardes, who published some of the first European books on American native plants in the late 1500s. However, the Native American tribes of Eastern North America and Canada used Monarda didyma medicinally for centuries before Nocholas Monardes studied the plant.
Monarda didyma common name of “bee balm” is attributed to the use of the herb for soothing bee stings. North American tribes in the eastern United States used the herb to ease the pain of mild abrasions and bee stings by crushing the leaves of the plant and rubbing them on the skin. The name, “Oswego tea,” is originated from the Native Americans living near the present-day city of Oswego in upstate New York who showed early settlers how to make an herbal tea from the leaves of the plant. Monarda didyma was used as a black tea replacement after the Boston Tea Party. 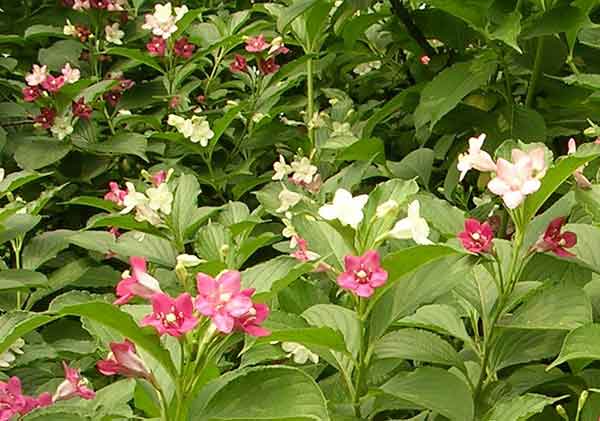 The bee balm grows to between three to five feet tall. This bushy plant produces leafy branches growing from clumps, with a shallow root system that allows the plant to spread its roots. The bee balm bursts into bloom, featuring dual-lipped flowers forming a spectacular display of tiered whorls at the tip of the stems. The color of the flowers ranges from scarlet, to purple, pink, and white. The flowers produce a rich citrus aroma that smells marvelous in the Garden throughout the peak of summer. Bee balm blooms from the early to late summer in the United States. If the gardener deadheads the dying flowers, then they can expect a second blooming shortly afterward. The bee balm produces dark-green leaves, with a toothed appearance. The leaves grow opposite to one another, and on square stalks, a characteristic of plants in the Mint family. The surface of the leaf feels somewhat fuzzy to touch.

Bee Balm (Monarda didyma) is native to Eastern North America and Canada. The native range extends from Quebec south to Maine and down to Georgia and westward from Ontario to Minnesota and down to Missouri. It is also native to Washington and Oregon in the west. 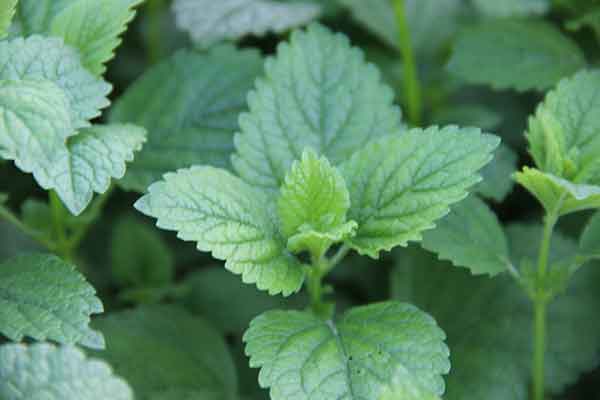 How to Grow and Care for Bee Balm (Monarda didyma)

Bee balm is not often propagated using cutting, but it can be done. The cutting should be taken using an area of the plant that has new growth that is at least six inched in length. The cutting needs to be from the tip to just below a set of leaves. Then, the cutting will need to be placed in a small pot that has peat moss mixed into the soil. Rooting hormones can be added as well. Once the soil is settled, water the cutting well and place a plastic bag over it to keep it moist. In about two to three weeks, the bag can be removed from the new plant if it has taken root. Make sure that the area where you plant it has enough air flow so that the roots can breathe. Bee balms spread rapidly via underground stems or stolons. In addition, the centers of the clumps often die out within a few years. To control their spread and rejuvenate the plants, it's usually necessary to dig and divide bee balms every 2 to 3 years. Early spring is the best time to dig and divide bee balms. Dig up the plants as soon as they emerge from the ground. Divide the clump into sections with a sharp knife. Each section should have at least 2 or 3 shoots and a good root system. Replant immediately.

How to Care for Bee Balm (Monarda didyma)

Thought bee balm can handle partial shade, it will thrive best if it receives at least six hours of full sun daily. Most gardeners grow bee balm in a traditional garden soil, but one with added compost is ideal. It will grow in both raised beds and containers. Soil pH of 6.0 to 7.0 is preferred, but bee balm can tolerate a range of 5.5 to 7.5. Bee balms like an even supply of moisture during the growing season. For best performance, water bee balms every 7 to 10 days during dry periods. Bee balm is not particularly picky about its temperature or humidity conditions, so long as it's planted in the proper USDA zones. That being said, new seeds should not be started until the ground temperature has reached at least 40 degrees Fahrenheit. Bee balms don't require frequent or heavy fertilizer applications. Sprinkling a small amount of an all-purpose garden fertilizer, such as 10-10-10, around each plant in early spring is usually sufficient. Avoid over fertilization. Remove any dead branches and remove spent blooms. Trim any remaining flowers back about an inch above the lowest set of leaves. Read more about how to care for bee balm. 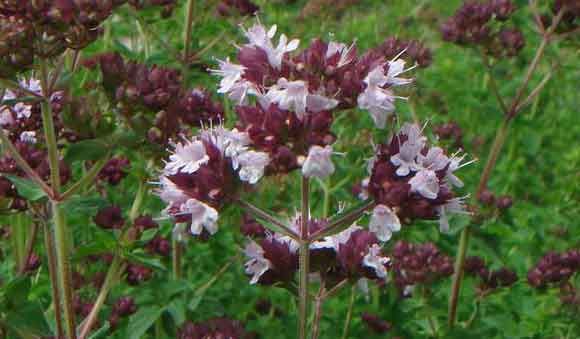 Monarda has a long history of medicinal uses by Native American tribes, American Eclectic physicians, and the Shakers. As a tea, it was used to soothe cold symptoms, including congestion, headache, and sore throats. Inhaling the fumes of steamed leaves was credited to help clear sinuses. Monarda has also been used for stomach issues such as gas, nausea, and vomiting, to reduce muscle spasms, and as a diuretic.
Monarda contains high concentrations of thymol, which is a strong antiseptic that is common in mouthwashes. The Native Americans used poultices made from the leaves of the plant for skin infections and minor wounds, and as a tea for mouth and throat infections caused by dental issues and gingivitis.
Monarda is a popular perennial plant used in bee and butterfly gardens. It is commonly known as Bee balm and its fragrant blossoms attract bees, hummingbirds, butterflies, and other pollinating insects. Monarda also has a long history of medicinal uses by Native American tribes, American Eclectic physicians, the Shakers, and herbalist.
Each variety of bee balm has a slightly different flavor. The foliage of Monarda didyma has a minty sage and oregano blended flavor. Not sweet mint like peppermint, but more pungent making it a nice compliment to roasted meats and wild game. The petals are milder in flavor and can be tossed into both leafy and Fruit salads to add a bit of spice and a burst of color. 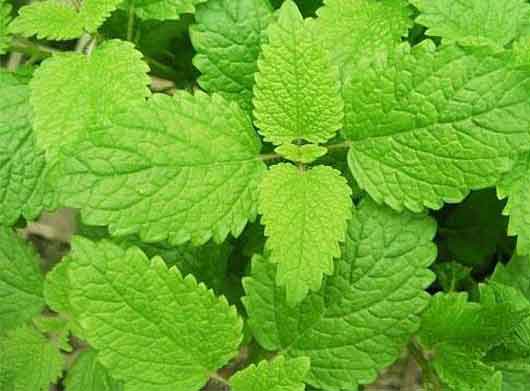 Bee balms may occasionally suffer some minor insect damage. However, powdery mildew is a more serious problem. Powdery mildew is a fungal disease. It appears as a grayish white "powder" on the upper leaf surfaces. Severely infected leaves drop prematurely. Disease symptoms are most severe on overcrowded plants, those growing in partial to heavy shade, and drought stressed plants.
Cultural practices can reduce the severity of powdery mildew. When planting bee balms, select a site in full sun and space plants 1 1/2 to 2 feet apart. Divide plants every 2 to 3 years and water during dry periods. Remove and destroy disease-infested plant debris in the fall. The fungal spores of powdery mildew survive the winter on disease-infested plant debris. The removal and destruction of this material removes the source of next year's infection.
The best way for home gardeners to avoid the annoying problem of powdery mildew is to select mildew resistant varieties. Varieties that possess good mildew resistance include 'Marshall's Delight' (bright pink flowers), 'Gardenview Scarlet' (scarlet-red flowers), 'Violet Queen' (violet-blue flowers), 'Raspberry Wine'(wine-red flowers), and 'Colrain Red' (purplish red flowers). 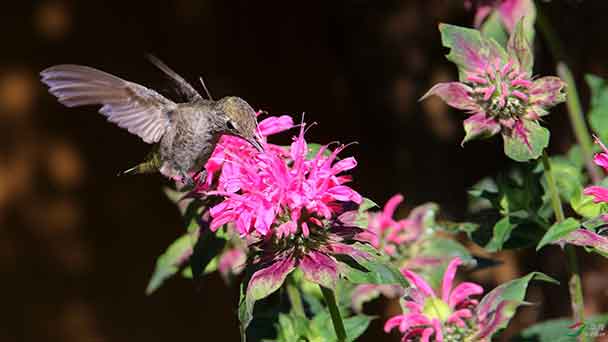 The distinctive tube-shaped flowers, vibrant colors, and dramatic height make bee balm a pretty complement to other common backyard plants. Plant bee balm with other prairie or meadow-like species including butterfly milkweed and rough goldenrod. The key strategy is to plant a variety of plants that will bloom at different times throughout the year; this provides a greater variety of nectar and pollen source for our pollinators. Since bee balm spreads so efficiently, it might also ward off invasive plants or weeds. For those with plenty of sunny space, bee balm will fill in nicely and create a very natural-looking landscape.