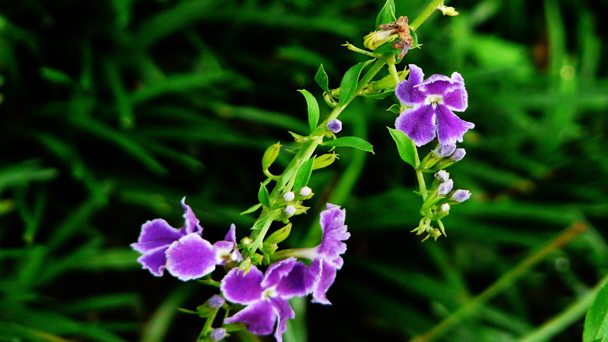 Duranta Erecta is native to Mexico, the Caribbean, Central America and much of South America. It is also native to the states of Arizona, California, Florida, Louisiana and Texas in the USA. However, other records report that it is introduced in Florida and Texas. This species is widely cultivated across the world and, as a result, has become naturalized in parts of Asia, Africa, the Indian Ocean islands of Mayotte and Reunion and much of Oceania. It is reported to be invasive in China, Taiwan, Hawaii (USA), Fiji, French Polynesia, Tonga and Australia. 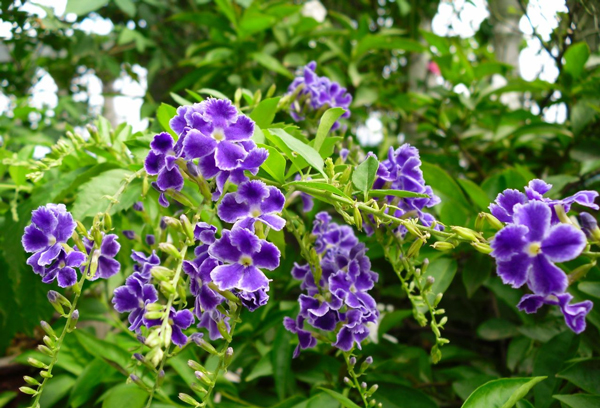 How to Grow and Care for Duranta erecta

How to Grow Duranta erecta

For propagating through seeds, collect the seeds from ripe fruits in the fall.
Spread them over a sterile potting mix, pressing slightly into the soil and water moderately.
Ideally, the seeds should be placed at 70° degrees Fahrenheit (21° C) in constantly moist soil.
In the right conditions, germination will take place within 30 to 60 days. In order to propagate Duranta, you need to use a hardwood cutting. Hardwood cuttings should preferably be taken during early spring or early winter. The reason for doing this is to incur as little damage to the parent plant as possible.
Take the following steps to successfully propagate your plant:
After you have a hardwood cutting, trim it at a point where a leaf bud would grow.
Leave at least two buds above the one at the bottom, and cut the top of the cutting.
Strip off the leaf buds at the bottom, and take off the bark about two inches on top of this.
Dip this end of the cutting into a rooting hormone and then place it into damp soilless mix.
Cover the pot with plastic, making sure that the plastic does not touch the cutting itself but still covers the whole thing.
Place this in indirect sunlight so it stays warm.
Keep checking the pot for root development. You can remove the plastic and start treating it like an adult once the roots have developed. 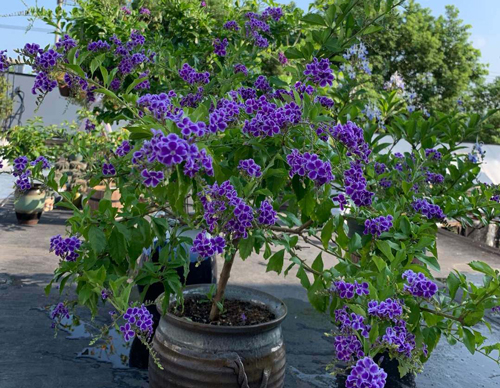 How to Care for Duranta erecta

Duranta plants prefer sunny environments. They like plenty of light to grow to their full potential. If placed outside, they should be placed in the full sun. A rich and organic soil, which drains well, is best suited to grow the Duranta erecta plant. Soil that does not drain well is a major cause of root rot in many plants, and it is a risk no one should knowingly take. New plantings should be watered daily for a couple of weeks. After that, depending on the weather and soil type, watering can be adjusted to every two or three days. Clay soils hold moisture longer than sandy soils, so expect to water more frequently in sandy settings. You can use general purpose fertiliser while planting Duranta. Make sure that the fertiliser is not in contact with the stem of the plant. You can use an organic fertiliser if the plant during winter. The sprawling growth of the plant should be controlled by regular thinning and pruning. Pruning and thinning encourages bushy growth with more branches and flowers.
Find more details on how to grow and care for Duranta Erecta. 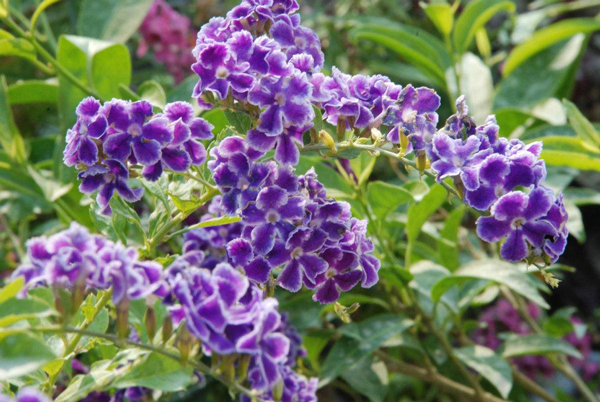 Outdoor golden dewdrop plants generally remain pest and disease-free. However, when grown indoors, they may be affected by whiteflies. The leaves and unripened berries of the Duranta plant are known to be highly toxic to children and pets; they are fatal. However, the berries become edible once they get ripe. Songbirds (oscines) are known to consume unripe fruits without experiencing any negative effects. The colorful flowers and berries are highly attractive to butterflies and hummingbirds. Birds also play a key role in seed dispersal and are the major reason why sky Flower plants become a fast-growing weed in many areas. 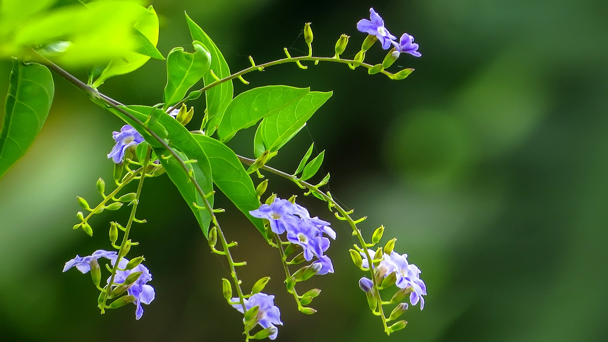 These shade-loving plants bloom in just about every color except true blue and are well suited to growing in containers or in the ground. If you have a bright spot indoors, you may be able to grow impatiens all year as an indoor plant. Among the most popular container-garden plants, sweet potato vine is a vigorous grower that you can count on to make a big impact. Its colorful foliage, in shades of chartreuse or purple, accents just about any other plant. Grow a few together in a large pot, and they'll make a big impact on their own. Sweet potato vines do best during the warm days of summer and prefer moist, well-drained soil. They thrive in sun or shade. If you love blue flowers, tweedia is for you. Tweedia produces beautiful turquoise blooms all season on grayish, felted foliage. The fragrant five-petal flowers make great cut flowers, complementing any bouquet. A short vine growing 2 to 3 fall, tweedia will twine around short trellises or other supports. (Try a shrubby branch cutting inserted into the soil for a naturalistic support.)