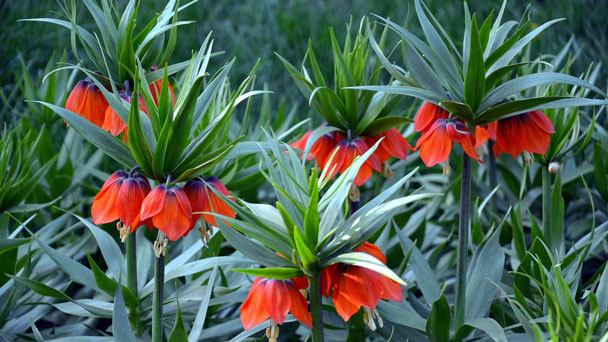 Crown imperial (Fritillaria imperialis) mentioned in Shakespeare's "Winter Tale" symbolizes youth as full of passion and vitality as the gorgeous flowers in spring. crown imperial can be seen that the crown imperial appeared in the courtyards of Western Europe very early. Fritillaria imperialis, distributed in the Himalayas, northern India, Turkey, Pakistan, Sudan and Iran. Crown Imperial was introduced to Europe as an ornamental plant for cultivation very early, and it is called "Imperial crown" or "Kaiser's crown" in Europe.

Originally coming from the mountain regions of foremost Asia, Crown imperial prefers sunny locations. Against a place in the southern ornamental border, it raises absolutely no objections. Also here their need for warmth is fulfilled. One should not give credit to Imperial crown that she also gets along with semi-shaded places. Shady sites can affect plant growth. Especially the formation of the flower suffers under the light deficiency.
In order to optimally facilitate the growth of the imperial crown, the choice of the right substrate is necessary. Hard grounds can be loosened permanently by mixing small amounts of sand or small pebble stones underneath the substrate. This action does not replace the regular mulching of the ground but certainly improves its structure. 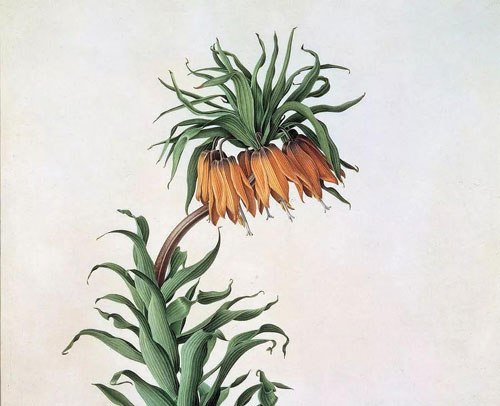 How to Grow Crown Imperial

Crown Imperials are made up of layers of scales, much like lilies. However, fritillarias usually have only a few scales, whereas lilies have several. In late summer or fall, after the stem has turned yellow and gone dormant, dig the fritillaria bulbs from the soil. Carefully break off one of the larger outer scales per bulb, as close to the base as possible.
Dust the mother bulbs with a powdered fungicide, such as captan, and replant them immediately. Wash the soil from the scales and lay them on paper towel. Dust them with the powdered fungicide and put them in a shady spot to dry for a day.
Put a handful of moist vermiculite into a plastic bag, add the treated scales and seal the bag. Poke a few small holes in the bag for ventilation and store it in a dark closet that stays around 70 degrees F for the winter. Check the bag occasionally and mist it to make sure the contents don't dry out.
Within six to eight weeks, tiny bulblets should have formed at the base of each scale. Plant them, scale and all, in well-drained, sandy soil just under the surface. Once leaves emerge, fertilize with a half-strength tomato fertilizer. This will help your bulbs get a faster start.
Now it's time to be patient — it may be a few years before your little bulblets flower.

Planting crown imperial bulbs correctly is perhaps the most challenging aspect of growing them. The 3-inch diameter bulbs have a distinctive shape with a pronounced indentation or hole on the top where the flower stalk and foliage emerge. The indentation can collect water if the bulb is positioned upright in the planting hole, which can cause the bulb to rot. The Texas A&M AgriLife Extension recommends planting the bulbs at a 45-degree angle, so water can't collect in the indentation.
Wear gloves when handling crown imperial fritillary bulbs because they have a distinctive musky, slightly unpleasant odor that can linger on the skin if handled bare-handed. Dig a planting hole 6 to 8 inches deep using a handheld spade. Position the bulb inside the planting hole at a 45-degree angle and fill in the hole completely with soil. Water deeply after planting the bulb to settle the soil. Spread a 3-inch-thick layer of mulch over the planting site to insulate the bulbs and help keep them cool and moist.

The first thing for growing Crown Imperial in pots you need to get some of these plants. There are many varieties available.
You can buy Crown Imperial from garden centers or online. If you have any doubts about which type of Crown Imperial to choose, then it would be better if you don’t buy them at all!
If you want to grow crown imperial plants indoors, then you will need a sunny location with good light level. You can use fluorescent lights or incandescent lights.
A temperature of around 70°F (21°C) is needed for best results.
You should start your Crown Imperial out in the spring, because they need time to acclimate themselves to their new environment. Crown Imperial may take up to two years before they begin blooming.
It’s best if you let Crown Imperial go dormant during winter months in pots so that the buds don’t dry out too much. After planting, you can water Crown Imperial once every few weeks until they bloom again in early summer.
You should also consider growing Crown Imperial outside in the ground. If you grow them outdoors, then you don’t need to start them until mid spring.
Crown Imperial will need six hours of direct sunlight each day, so choose a location that has this. You should also make sure that the soil of the pots is rich and well drained.
Crown Imperial will be ready to harvest about two years after planting. Each Crown Imperial can produce about 15 blooms per plant.
The blooms can be anywhere from one to three inches wide. Each Crown Imperial bloom will last up to about two weeks. 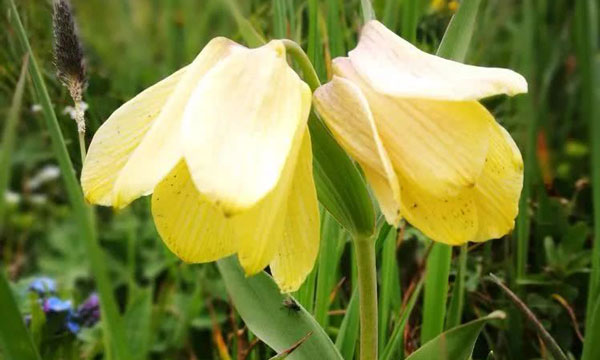 How to Care for Crown Imperial

Crown Imperial prefers full sun (six to eight hours of sun per day) and will also grow in semi-shade, woodland conditions.
Crown imperial grows well where the soil is well drained. Crown imperial's soil can be improved with 2-3 inches of organic materials, such as compost, peat moss, ground bark or rotten fertilizer, to improve drainage. This location should not be wet.
Crown imperial grows vigorously under a range of light conditions, from full sunlight to partial or spotted shadows. When planting a variety, such as crown imperial, is said to have an unpleasant smell, you should consider choosing a location away from the house.

Crown Imperials bulbs are susceptible to rot, so it’s particularly important to plant Crown Imperial in well drained soil. As a precaution, you can dig a slightly deeper hole and put a shovelful of sand under the bulb. Another option is to plant the bulb on its side so water is less likely to collect in the hole on the top of the bulb. When the stem emerges in spring, it will head for the sun and grow just as straight as if you had planted the bulb upright.
Planting crown imperial shall use sandy or loamy soil with good drainage. Crown imperial's best planting time is in August and September, because they will bloom around May and April.
When you plant crown imperial bulbs, please follow the following distance and spacing suggestions: checkered lily, yellow Fritillaria and purple Fritillaria - 2-3 inches deep and 3 inches apart.
Crown imperial - 5 inches deep, 7 inches to 8 inches apart. Crown imperial has a "hole" in the top center of the bulb. When planting crown imperial, it should face upward and slightly sideways.
According to the type of crown imperial, crown Imperial is round with slight dents on the top or small spots. This side should be planted upward. If the root of crown imperial's bulb is very small, it is used to determine which side is the bottom.

Crown Imperials do not require special watering before and during bloom unless the spring garden is unusually dry. It is after blooming that regular watering is required, either from rain or a sprinkler. This is the period when bulbs are growing and storing nutrients. If weather is hot and dry, water the bulb thoroughly once a week.

During the growth in springtime bulbous plants consume lots of nutrients. In order to meet the needs of the vigorous debilitating plant, organic or mineral fertilizer is prescribed in springtime. Semi-mature compost has proven its worth here also and is incorporated directly into the soil. In this way, the nutrients of crown imperials quickly reach the deep-seated bulb lumps in the ground.
The supply of important micronutrient should take place once more in the late summer. At this time the imperial crown prepares itself for the cold season and accumulates energy for the growth in next spring. As a substitute, fritillaria imperialis is satisfied with a liquid fertilizer from the trade. This is fed through the irrigation water and the quantity indicated on the packaging must not be exceeded.

The leafage must not be cut off until it has withered away completely. Indeed, the phase where the leaves turn yellow is exactly when the plant stocks up on nutrients for the next blooming cycle. Cut the leaves short before winter and mulch with dried leaves to protect it from the cold.

Generally, Crown Imperial are disease free. However, they are prone to slugs and lily beetles, which can be controlled using chemical and natural methods. Crown Imperials are also deer resistant making them a bulb to enjoy without worries.

Crown Imperials may look exotic, but they are easy to grow and fully hardy. F. meleagris grows to around 30cms (12"), quite small and dainty whereas the Imperialis grows much taller, up to 1.5m (5')It is a robust plant with large showy flowers; a statuesque plant which makes a bold statement.

How Tall Are Crown Imperial?

Non-flowering: Most gardeners manage to flower crown imperials in the first year but on less than ideal soils, such as heavy clays or infertile, sandy soils, or where bulbs are planted too shallowly, they rarely flower in subsequent years.