When grown indoors, Alocasia Amazonica rarely produces a bloom, which is an insignificant greenish-yellow spathe. Even if you are lucky enough to have your plant bloom, any seeds produced are likely sterile so the only way to propagate additional plants is through dividing offsets from the mother. This is best done while it is actively growing in spring and when you go about the chore of repotting.
Steps for dividing include: 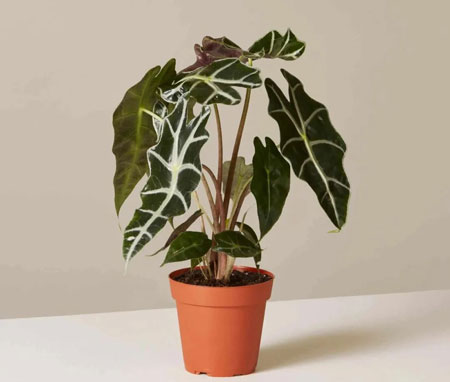 How to Care for Alocasia Amazonica (Elephant's Ear)

In their native environment, the parents of Alocasia Amazonica can usually be found growing near a source of water where their roots stay moist. Therefore, it is important to water frequently enough to keep the soil evenly moist but not soggy, especially during the growing seasons of spring throughout summer.
During winter, the plant goes through a dormant stage and active growing stops, so you won’t have to water as frequently as you would while it is actively growing. However, you never want the soil to completely dry out. Checking the moisture content of the soil is easy.
Check the soil’s moisture by sticking your finger into the soil and if the top inch is starting to feel dry to the touch, apply water until it runs from the pot’s bottom drain holes.
Depending on outdoor temperatures and light conditions coming through the window where the Alocasia Amazonica is situated, during the growing season you may have to water one to two times weekly.
In addition, during the dormant season of winter, you may only need to water once every week to two weeks. Regularly checking the soil’s moisture content and applying water as needed will keep your Alocasia Amazonica performing at its best.

As a tropical plant, Amazonian elephant's ear will go dormant or die if exposed to cold temperatures. It likes to be in a climate similar to its native Southeast Asia, with temperatures ranging between 65 degrees Fahrenheit and 75 degrees Fahrenheit. Additionally, the plant loves above-average humidity levels. You can start by housing your Amazonian elephant's ear in a typically humid room in your home (like a bathroom), but you may also need to place the plant on a humidity tray with pebbles or invest in a small space a humidifier to put nearby.

Feed with general houseplant fertilizer monthly during the growing season (spring to summer).

Quickly remove any yellow leaves or those that develop brown or black spots as that may be a sign of a fungal disease.

Spraying an alocasia with warm soapy water every few weeks helps prevent Mealy Bugs, Scale, Aphids, and spider mite problems. It also keeps the large leaves of the plant dust-free. If an Alocasia does become infested, spray with an ultra-fine commercial insecticidal oil or Neem Oil. This kills both the pests and their eggs.
When alocasia plants are over-watered or when the leaves are consistently wet, they develop a variety of diseases such as crown, stem, and root rot, leaf spot, and Xanthomonas. These diseases usually appear as dark brown or black spots on the leaves, surrounded by a yellowish rim. The best way to prevent plant diseases is to avoid over-watering, keep the leaves dry, and provide good air circulation around the plant. Once an alocasia is infected, quickly remove the damaged leaves and any leaves that have fallen off, isolate the plant from your other plants, and treat with a commercial Fungicide. 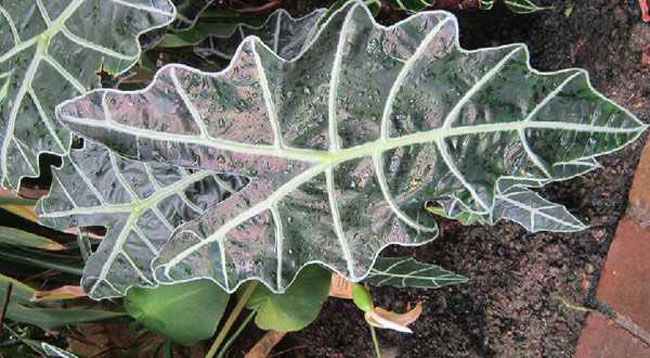 Why Does My New Little Alocasia Plant Lose a Leaf Every Time it Grows a New Leaf?

When Should I Re-pot an Alocasia Plant?

The best way to know when it is time to re-pot an alocasia plant is to gently take your plant out of its pot. If the roots have taken on the shape of the pot, it's time for a larger pot. Be sure your new pot is only a few inches larger than your old pot so the roots don't stay too wet and rot. Don't be in a rush to move your plant to a larger pot, these plants like to be root- bound in small pots.

Due to the calcium oxalate crystals contained in the entire plant, Alocasia Amazonica is highly toxic to people, cats, dogs and horses. Ingestions of the plant cause an intense burning of the mouth, which can lead to swelling of the airways and potential death.
Even the sap can cause skin irritation. Be sure to situate the plant in a location that is out of reach of children and pets.