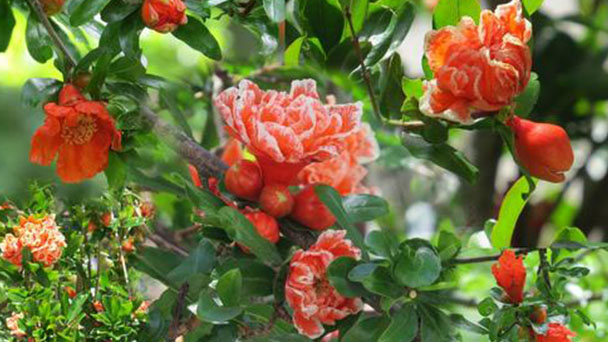 The fruit of Pomegranate flowers ripens in September and October.

Pomegranate flowers are tolerant to cold, drought, waterlogging and shade. They are not strict with soil. It is best to choose fertile, loose and nutritious sandy loam soil.

Pomegranate flowers are commonly propagated by cuttings, splitting and layering. When cutting, choose biennial branches in spring or use semi-lignified branches in summer that can be inserted, rooted 15-20 days after insertion. Separate plants can be in early spring in April bud initiation, dig robust root tiller seedling points.

Slath can be carried out in  spring, autumn, and does not have to cut injury, before bud initiation with root part tillering pressure into the soil, after the summer rooting cut from the mother plant, autumn is into seedlings.

Open cultivation should choose the place with sufficient light and good drainage. In the process of growth, it is necessary to remove the roots and tillering seedlings and cut off the dead branches, sick branches, dense branches and long branches for the sake of ventilation and light.

Potted Pomegranate flowers should be shallow, and we need to control watering. It should be dry, not wet. In the growing period, we need to pick the heart, control the growth of vegetative branches, and promote the formation of Flower buds. 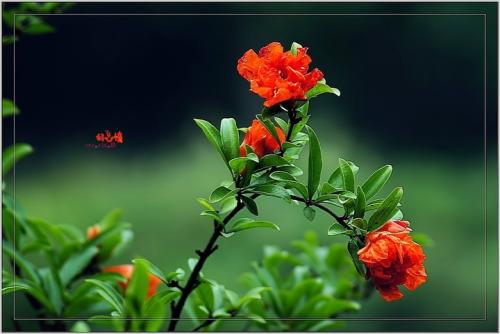 Prevention of diseases and pests of Pomegranate flowers

Pomegranate flowers have both considerable flowers and fruit. Small pot plants are used for windowsills, balconies and bedroom furnishings. Large pot plants can be used to decorate public places and meeting places.

As a medicine, Pomegranate flowers have a long history and are recorded in various ancient medical books.

Through clinical practice, doctors of all dynasties believe that Pomegranate flowers are cool in nature and have the effects of clearing away heat, detoxifying, strengthening stomach, moistening lung, astringent intestine and hemostasis.

The selection of pots: Wooden barrels, wooden boxes, the diameter of the basin mouth 30-40 cm, 30-35 cm deep. Nutrient soil preparation: leaf leaf soil or humus soil 7, turf soil 2, sand soil 1. All kinds of soil will be broken and sifted, mixed evenly, stacked, spread branches or other flammable material on top, lit, not only increase the plant ash, but also play a role in high temperature treatment of the soil.

Transplant seedlings into the pot in the middle and late March. Before planting the pot bottom drainage hole with tiles pad, the pot bottom filled with part of the nutrient soil, the seedlings into the pot, covered with soil cultivation, with the hand to slightly lift the seedlings up a few times, pouring permeable, after the water seepage and then covered with soil. The fill should be 5cm below the edge of the basin. Then place the basin in a sunny place to increase humidity and promote root growth.

The characteristics of tight branches and dense leaves, dormant period can be a thinning pruning, can be cut into a single round head, can also be cut into a multi-stem cluster or flat top type.

In case of dry rot or coal stain, the infected branches can be cut off and burned.Peach borer was the main pest, which was sprayed 50% dichlorvos 500-1000 times during egg hatching. From early June to early July, the larvae were sprayed with 2000 times solution to kill thrin before caries, and other leaf-eating pests were also treated. After fruit setting, 5 grams of phoxim emulsion can be used for 500 grams of dry fine soil, adding appropriate amounts of water to prepare medicine mud, for prevention and control.

In winter, place potted Pomegranate flowers in a sunny room at a room temperature of no more than 5℃ to maintain normal dormancy. 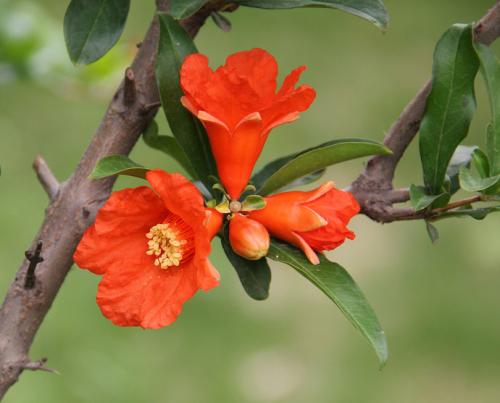 How to care for Pomegranate flowers

How to grow and care for Pomegranate flowers