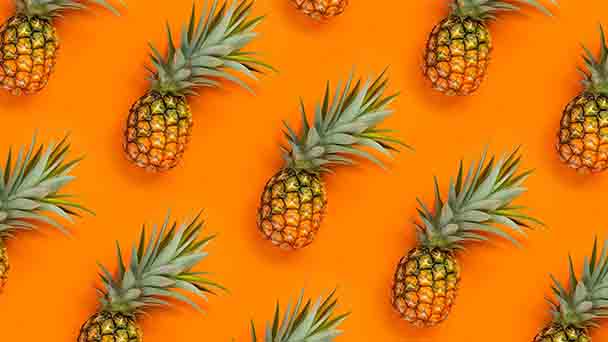 Pineapple morphological characteristicsPineapple growth habit and growing environment and distributionTemperatureMoistureIlluminationSoilWindPineapple efficacy and roleThe medicinal value of pineappleThe edible value of pineapplePineapple cultivationReproduction method
Pineapple is native to Brazil and Paraguay in South America, and it was introduced to China from Brazil in the 16th century. Has spread throughout the tropics. The edible part of the Pineapple is mainly composed of the fleshy inflorescence axis and the flowers arranged spirally on the periphery. The flowers of the pineapple are usually not strong, and the persistent perianth lobes enclose a cavity, which contains atrophic stamens and styles. The fiber of the pineapple leaves is very tough and can be used for fabrics, rope making, netting, and paper making. 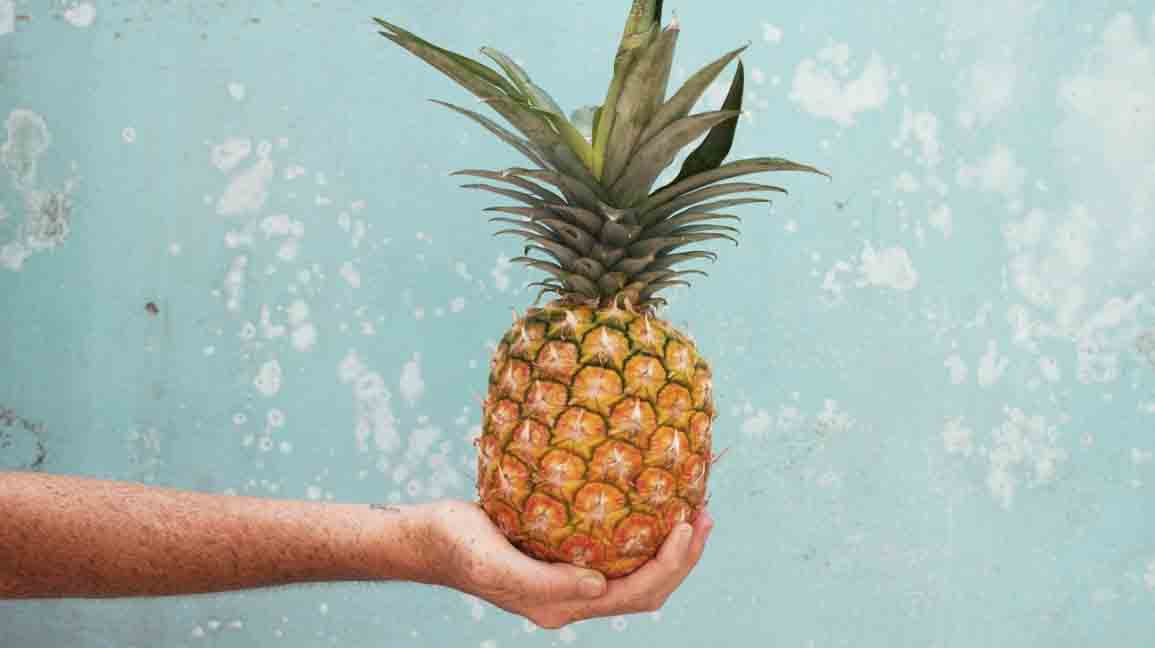 Pineapple has a short stem. Many leaves, rosette arrangement, sword-shaped, 40-90 cm long, 4-7 cm wide, apex acuminate, entire or sharp teeth, ventral green, back pink-green, edges and apex often brownish red, born in The leaves at the top of the inflorescence become smaller and often red.
The inflorescences are drawn out from the leaves and are shaped like pine cones, 6-8 cm long, and increase in size. The base of the bracts of pineapple is green, and the upper part is reddish, triangular-ovate. The sepals of pineapple are broadly ovoid, fleshy, with reddish tops, and are about 1 cm long. Its petals are oblong, pointed at the end, about 2 cm long, purple-red in the upper part and white in the lower part.
The pineapple has the fleshy quality of poly Flower Fruit and is more than 15 cm in length. Its flowering period is from summer to winter. 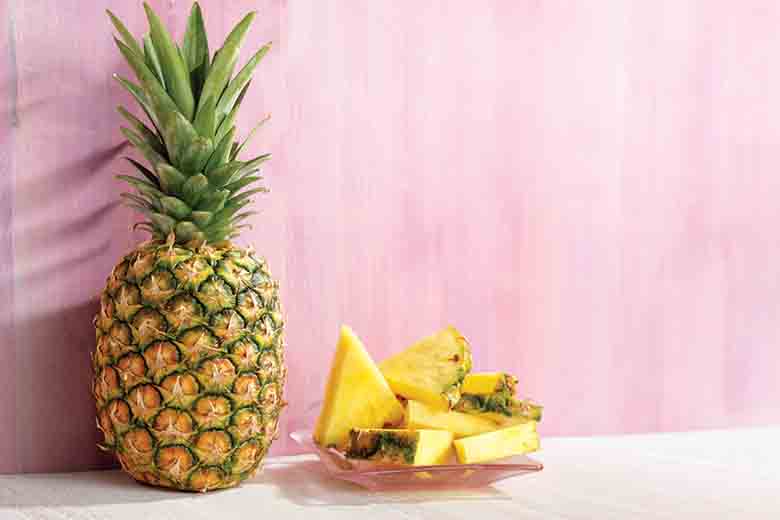 Pineapple is native to the dry tropical mountains of Brazil, Argentina and Paraguay, but no real wild has been found. It was spread to Central America and northern South America before 1600 AD. As the pineapple sprouts are more resistant to storage and transportation, they will be quickly introduced into tropical and subtropical regions of the world in a short time. From the end of the 16th century to the 17th century, it was introduced to various regions in southern China. It is cultivated in about 61 countries and regions in the world. In addition to China, Thailand, the United States, Brazil, Mexico, the Philippines and Malaysia are more cultivated.
Pineapple has its own special growth habit. Most pineapples have rosette-like leaves. The base of the leaf cluster forms a leaf tube that can store water. The water required for the growth and development of this type of pineapple is not stored in the mesophyll but stored in the naturally formed groove at the central growth point of the cluster of leaves. In addition to frequent watering to keep the pot soil moist, the growing season must also be frequent Watering the leaf tube so that there is enough water in the leaf tube can make it grow vigorously. This is a special habit of pineapple. 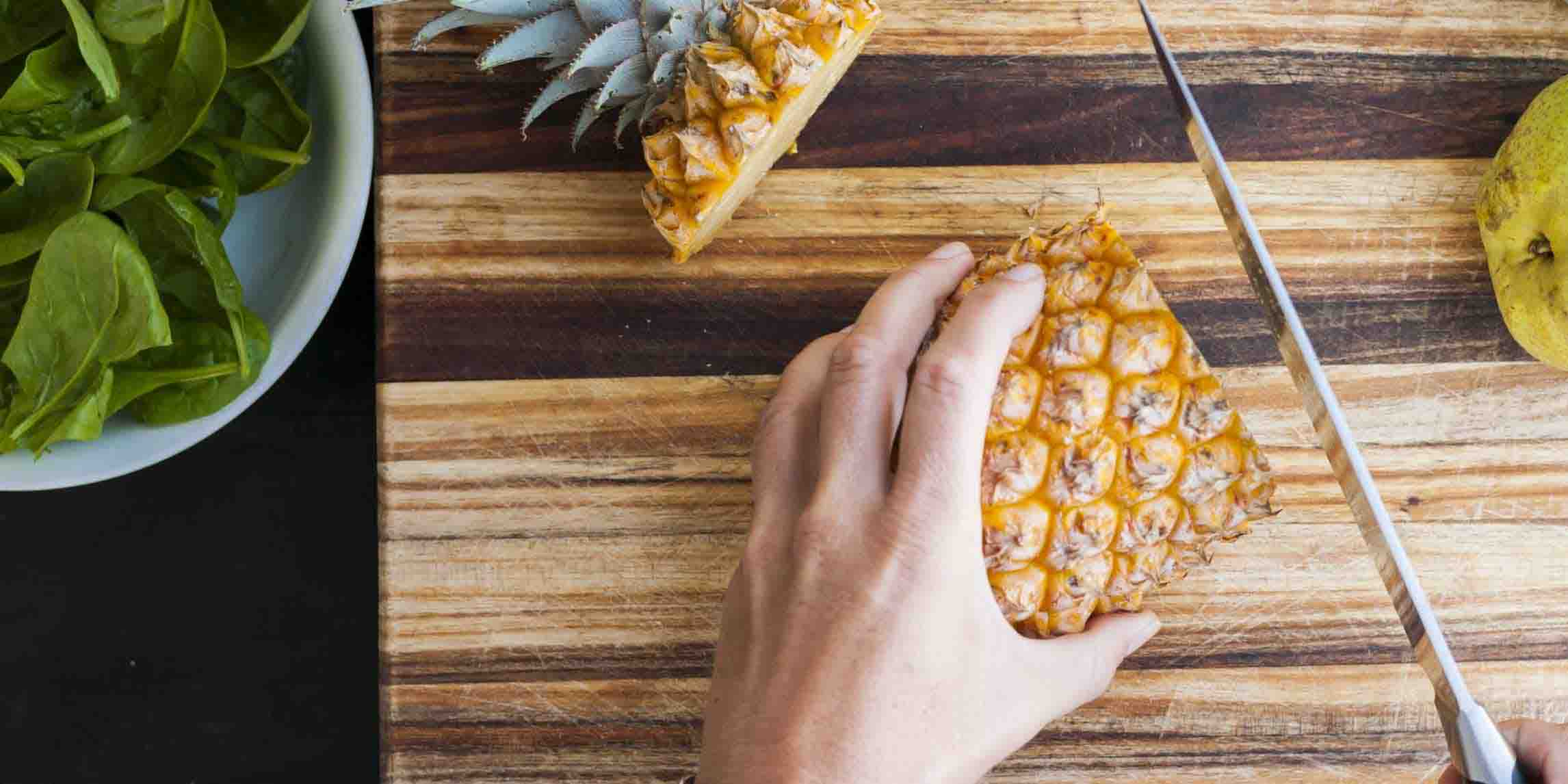 Pineapple is native to tropical high temperatures and arid areas in South America. It enjoys warm sex. It can grow at an average annual temperature of 24-27℃. It can grow in the range of 15-40℃. It grows slowly below 15℃. It basically stops growing when it is below 10℃. The critical temperature for cold damage.
The planting depth is generally not more than 1/5 of the bud length. After inserting, put it in the shade and keep the potting soil dry. It can take about 1 month at a temperature of 22~24℃. The optimum temperature for root growth is 29-31°C, and the growth stops when it is lower than 5°C or higher than 43°C; the roots start to grow in March and grow rapidly as the temperature rises. The growth reached its highest peak from late May to July and then slowed down after October. The near-surface root system died due to cold and drought from December to February of the following year. In the warm spring, the leaves begin to shrink. From May to July, the leaves are dark green and grow faster. In winter, they basically stop extracting, and the leaf color turns red and yellow. If the leaf tissues are dehydrated and become green, they will become dry.

Strong drought tolerance, but still need a certain amount of water for growth and development. Pineapple plants have the function of self-regulation when the soil is short of water, reducing transpiration intensity, slowing down respiration, saving water in the leaves to maintain life activities; when severe water shortages, the leaves are red Yellow, need to be irrigated in time to prevent drying out; excessive rain and high soil moisture will rot the root system and cause plant heart rot or withering. Therefore, drainage must be timely after heavy rain or heavy rain.

The pineapple was originally grown in a semi-shade tropical rain forest, which is more shade-tolerant. Due to long-term artificial cultivation and domestication, it has increased requirements for light. It grows well under sufficient light, and the fruit has high sugar content and good quality; insufficient light will slow growth and fruit acid. High quantity and poor quality. The light is reduced by 20% and the output is reduced by 10%. However, if the light is too strong and high temperature, the leaves turn red and yellow, and the fruits are also easily burned. 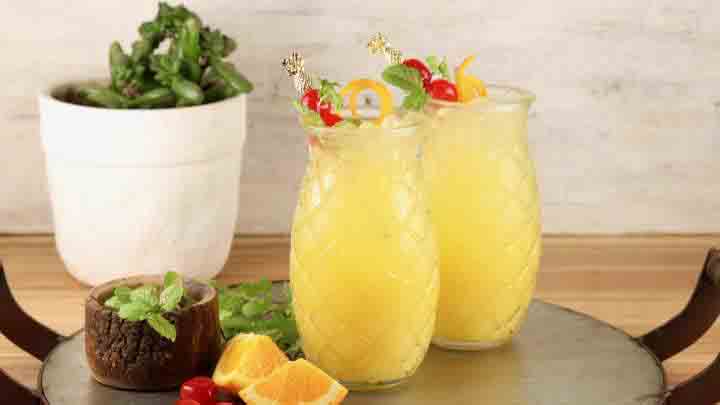 Pineapple has wide adaptability to the soil. Because the root system is shallow and aerobic, it is better to use loose, well-drained, rich organic matter, sandy loam or mountain red soil with a pH of 5 to 5.5, and barren, sticky, and poorly drained soil And the high groundwater level is not good for pineapple growth.

Pineapples are short-grown and have a little direct impact on wind damage. Winds below grade 3 are also good for respiration. Strong typhoons and strong winds can also blow down plants, break fruit stalks, and twist leaves, affecting normal growth and development; cold wind and rain in winter can cause bad feelings.

The medicinal value of pineapple 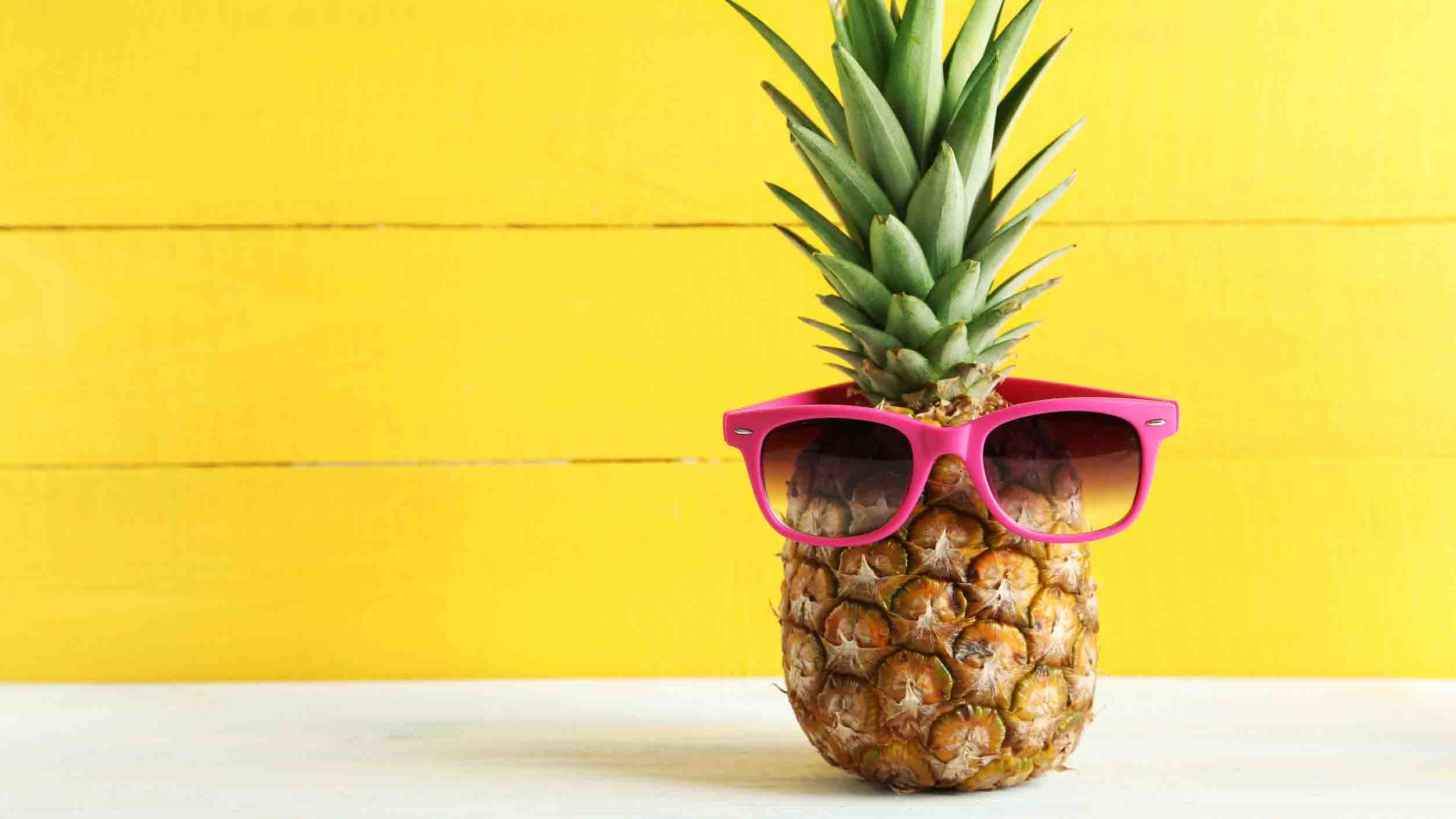 Pineapple is sweet, slightly sour, slightly astringent, and slightly cold in nature. It has the functions of clearing heat and quenching thirst, eliminating food and stopping diarrhea, replenishing the spleen and stomach, strengthening vitality, replenishing qi and blood, eliminating food, dispelling dampness, nourishing skin and slimming. Seasonal fruits, but not too much at once.
Pineapple contains a pineapple enzyme substance, which can break down protein, help digestion, dissolve fibrin and blood clots blocked in tissues, improve local blood circulation, dilute blood lipids, eliminate inflammation and edema, and promote blood circulation. Especially after eating meat and greasy food, eating pineapple is more appropriate to prevent fat deposition.
Bromelain can effectively decompose protein in food and increase gastrointestinal motility. This enzyme can break down protein in the stomach, supplement the lack of digestive enzymes in the human body, and restore normal digestive functions to patients with indigestion. This substance can prevent gel aggregation, can be used to make milk sour or soften other fruits, but this characteristic will be weakened in cooking.
In addition, the sugars and enzymes contained in pineapple have a certain diuretic effect, which is beneficial to people with nephritis and hypertension, and it also has auxiliary effects on bronchitis. Due to the effect of cellulose, it also has a certain effect on the treatment of constipation. When indigestion occurs, eating pineapple can appetite and relieve greasiness, help digestion, and relieve constipation. In addition, pineapple is rich in vitamin B1, which can promote metabolism and relieve fatigue.
Pineapple juice has a cooling effect and can effectively prevent bronchitis, but it is best not to consume it if you have a fever. According to medical research, since ancient times, humans have often used the bromelain contained in pineapple to relieve the symptoms of sore throat and cough. Pineapple peel is rich in pineapple enzyme, which has rich medicinal value. According to the experiments of foreign experts for more than 20 years, long-term consumption of pineapple peel will significantly reduce the incidence of cardiovascular and cerebrovascular diseases and reduce the incidence of diabetes and has a certain anti-cancer effect. It also contains an enzyme that can break down protein.

The edible value of pineapple 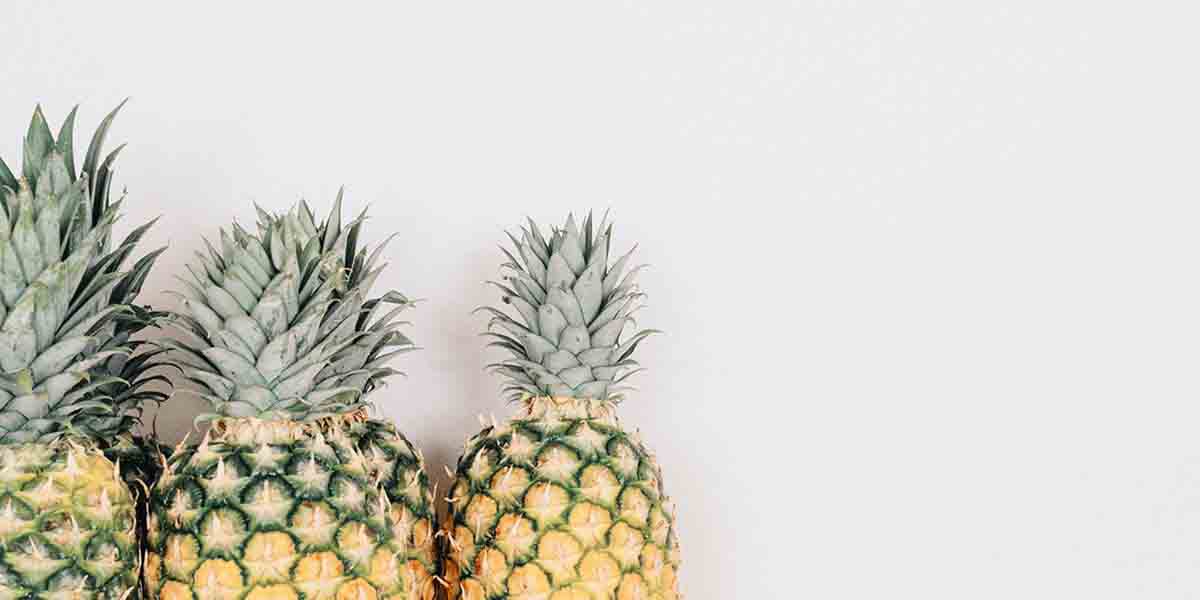 As a fresh food, pineapple is golden in color, rich in fragrance, sweet and sour, crisp and juicy. In addition to fresh food, the pineapple fruit is mostly used to make canned food. It is widely loved because it can maintain the original flavor. Processed product canned pineapple is known as "international canned fruit", and it can also be made into a variety of processed products, which is widely welcomed by consumers.
Pineapple, like some fruits, will make some people allergic to it. Allergic reactions can occur within 15 minutes. This symptom is called "pineapple disease" or "pineapple poisoning." For example, abdominal pain, diarrhea, vomiting, headache, dizziness, flushing of the skin, itching all over the body, tingling of the limbs and tongue, severe allergies, breathing difficulties, shock and other reactions.
Soaking the pineapple in saltwater before eating can also decompose part of the organic acid contained in it in the saltwater to remove the sour taste and make the pineapple taste sweeter. It can also be boiled in boiling water before eating. Bromelain begins to denature at 45°C to 50°C, and more than 90% of it is destroyed at 100°C; glycosides can also be destroyed and eliminated; serotonin is dissolved in water. The taste is also improved after boiling. Do not eat too much pineapple at a time. Excessive consumption is harmful to the stomach. The baby who eats for the first time only eats a biscuit-sized piece. If there is no abnormality, the amount can be increased next time.

The pineapple plant is highly adaptable, barren, drought-tolerant, and has fewer pests and diseases. It is an important pioneer crop in newly reclaimed mountains. It is easy to cultivate, has a high yield, and can also be intercropped. It is a good tree for the development of southeast hills, the development of rural economy and the enrichment of farmers.

There are 3800-4000 pineapples planted in acres, which require a huge amount of seedlings. Three methods are commonly used for germination propagation, vegetative propagation and tissue culture.
Germination time and method: From May to November, select plants with 40 cm long green leaves, usually 40 leaves for canine species and 35 leaves for Philippine species. Use 250 mg/liter of ethephon plus 25 ml of a mixture of 1% urea and 0.5% potassium chloride to infuse the sprouting for each plant. On the 5th and 12th day after treatment, use 1200～1500 times and 600 times～750 times respectively. 25 ml of solution perfuse.
For vegetative reproduction, small seedlings are often cultivated, that is, small apical buds, small sprouting buds, small suction buds and fruit tumor buds in the field are used for classification and false planting in the nursery after cultivation. The small buds left on the stalk after fruit picking are used to grow into seedlings, and the old stems are cut to reproduce and renew the old stems to reproduce.
Tissue culture seedlings, using Ms medium, at room temperature 30 ℃, 12 hours light or natural light culture room.