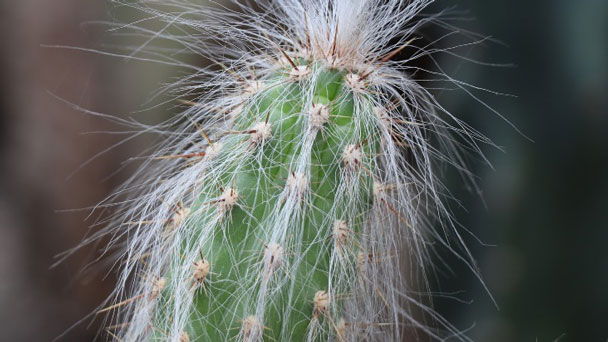 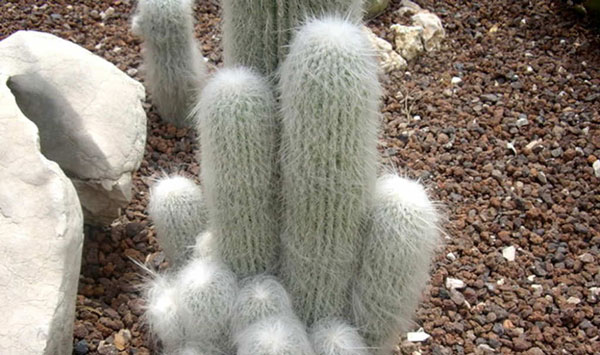 The slow-growing Cactus reaches about twenty feet or more in its native habitat, producing many columnar stems that are usually un-branched. Its species name, senilis, comes from the Latin word meaning old man. As the name implies, it has grayish-white, distinctive, long, wooly hairs that look like a beard. The hairs cover the plant to protect it from scorching summer temperatures and to provide warmth in the winter. Its shaggy coat of hair conceals many tiny, sharp, yellow spines. In springtime, it produces two-inch-long, whitish-pink flowers that open at night. At maturity, following the blooms, the plant develops pinkish-red fruit that is covered with yellowish hair.

Old Man Cactus (Cephalocereus senilis) is a species of cactus native to Guanajuato and Hidalgo in eastern Mexico. It is threatened in the wild, but widespread propagation and popularity in cultivation have reduced the demand on wild populations. The species is one of the dominant elements of the xerophile scrub where it grows and it is restricted to calcareous canyons within xerophile vegetation. 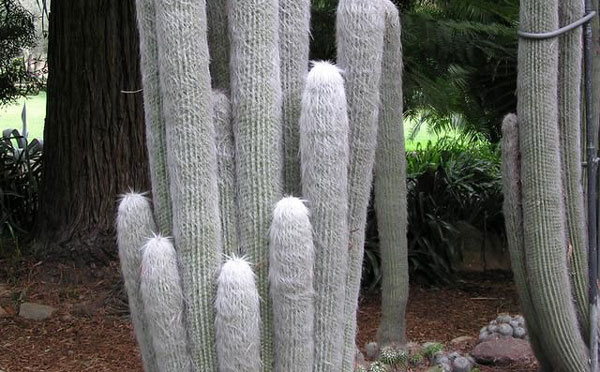 How to Grow and Care for Old Man Cactus

How to Grow Old Man Cactus

Propagating Old Man Cactus from the seed is fairly simple, bet requires a lot of patience. You can collect the seeds from an Old man cactus flower, or purchase them from a reputable dealer. The important thing is providing a well-draining soil, and a grow light or a heated seed mat. Growing the seed can also serve as a fun project for children. We recommend doing this in May. If you do not have enough time to wait, you can simply plant an Old Man Cactus cutting in a suitable pot with the right soil. But before actually planting the cutting, lie it out on the surface in a dry location for a few days to callus. After this time, plant it in dry sand or perlite. Place the cutting in moderate light with at least 70 °F (21 °C) temperature for best rooting. Do not water the Old Man Cactus cutting until it has rooted. After that, care for it like a mature plant. Removing offsets is the easiest method of Cephalocereus senilis propagation. These Old Man Cactus naturally grow in clumps, so it’s generally just a matter of gently separating individual cacti.
Most of the time, this can be accomplished by gently uprooting one or more offsets from the clump. You can use your hands, as long as you wear protective clothing, or you can cut the roots with a sharp, clean knife.
Once you’ve separated the offsets, allow them to dry out in the open air for several days. When you break or cut them away from the mother plant, you’re introducing open wounds, which are at risk of infection by bacteria or fungi.
The drying process allows those open wounds to callous, which will help prevent infection and give the offsets a better chance of survival.
Once the cuts have calloused, you can safely plant the offsets in new containers. After they’ve been transplanted, caring for the offsets is as simple as caring for mature cephalocereus senilis. 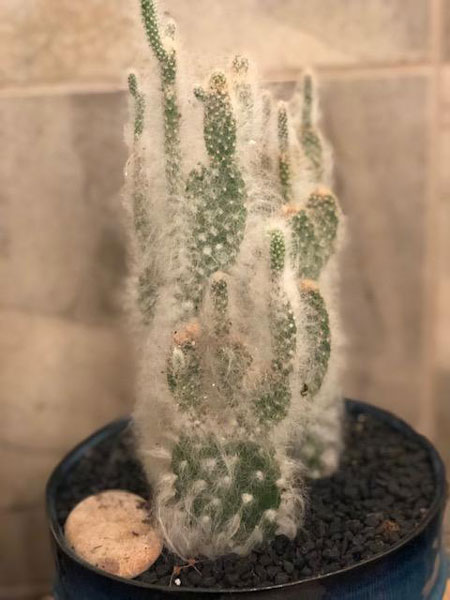 How to Care for Old Man Cactus

As you might imagine, the Old Man Cactus needs lots of sunlight to thrive. Old Man Cactus do best in full sun when planted outdoors. When grown indoors, Old Man Cactus need as much light as they can get.  Different types of old man cactus prefer well-draining soil, like pre-made cactus soils or a mixture of sand, perlite, and suitable soil for cacti.  Before watering your Old Man Cactus, make sure that the top two inches of its soil are dry. For irrigation in winter, the top couple of inches should be dry. This means that you only need to water it less than two times during winters.  Old Man Cactus is not a cold-hardy plant. If you live in a climate with harsh winters, you will need to bring your cactus indoors until spring. Old Man Cactus (Cephalocereus senilis) is capable of surviving extreme heat, but it will not survive extreme cold. Generally, a light frost shouldn’t be too much of a concern, but prolonged cold weather will be a problem. If you’re expecting temperatures to drop below freezing, it’s best to keep your cactus protected. At the start of the growth, period apply a dressing of slow-release fertilizer and stir it into the surface soil in the pot. Avoid splashing the hairs with fertilizer. Old Man Cactus (Cephalocereus senilis) almost needs zero pruning, since it slowly grows in a straight line. And thanks to its dense hairs, it is protected against both heat and cold, while retaining the desired moisture. What you can do, is an occasional spray of water, combing the hair to clean any dust and insects; and of course, so that your old man looks well-trimmed. 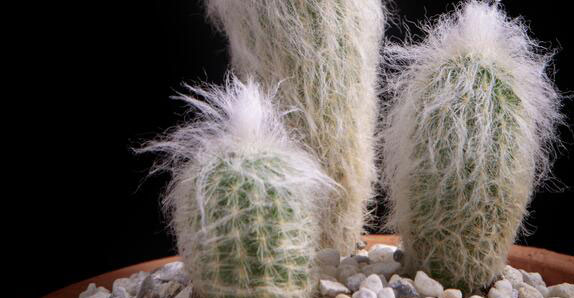 The woolly spines and striking white color of the Old Man Cactus (Cephalocereus senilis) easily make it a strong accent in the garden. Together with rounded and columnar cactuses, this plant will create a statement in a desert-themed landscape. It is also a distinctive addition to an indoor collection of cacti.
Because of its exceptional appearance, the Old Man Cactus has become a favorite houseplant. However, it is currently listed as an endangered species in its natural habitat so poaching is extremely prohibited. Plants available in the market are produced from propagation instead. 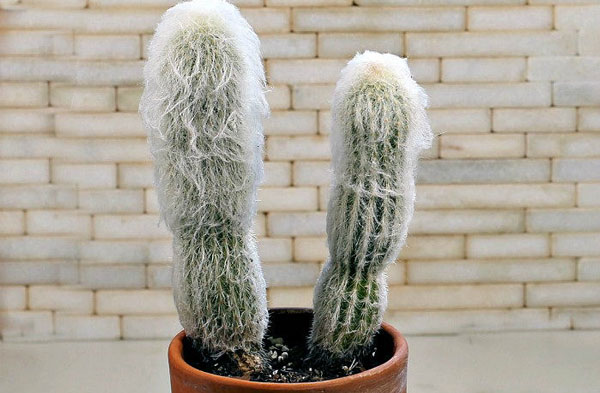 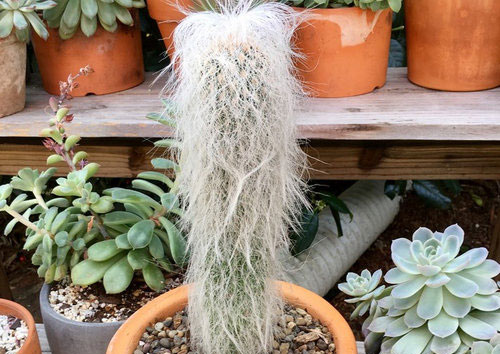 Old Man Cactus (Cephalocereus senilis) isn't any more prone to common succulent pests than any other species of cactus, but it can be more difficult to detect pests because of the hair. While it would be nice if pests lived on the outside of the hair, so they'd be easier to see, that's not where the food source is.
When checking your Old Man Cactus for pests, you'll need to cautiously search under the hair while avoiding the sharp spines hidden among the fluff.
Detecting white, fuzzy pests like mealybugs or the webs of spider mites can be especially difficult, so it’s important to examine your plant closely if you suspect an infestation.
Fortunately, dealing with pests on cephalocereus senilis isn’t any more difficult than treating the problem on other cacti. This is especially true if you can catch the infestation in its early stages.
However, if you’re applying a topical treatment to the Old Man Cactus, you'll need to be sure that the treatment is reaching the cactus itself and isn't just sitting atop the hair.

Old Man Cactus (Cephalocereus senilis) is a very popular cactus in warm climate desert gardening, grown for its woolly appearance. It is great for inexperienced gardeners and those that like low maintenance gardens, but this cacti is a frost tender. In colder climates, it is recommended to be keep in a container that can be taken outside for the summer and easily moved indoors for the winter. It is a very drought and heat tolerant. These facts are making it a stunning xeric landscape plant where it can reach its largest, most impressive size. This cacti has sharp thorns. Plant them away from play areas and pathways. Wear gloves and protective eyewear when handling cactus plants.