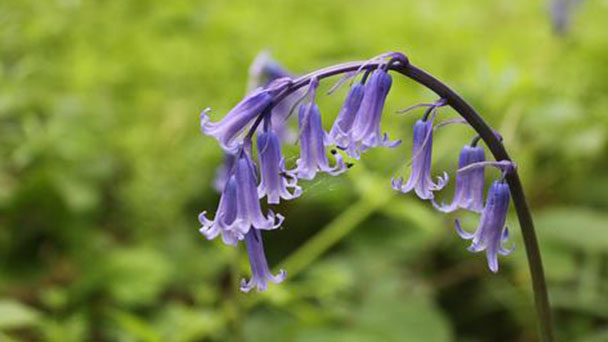 English bluebell, also called Hyacinthoides non-scripta, Common Bluebell, is a kind of perennial bulbous plant of the genus English bluebell in the asparagaceae. It is distributed in the Atlantic region from northwest Spain to the British Isles. It is a common garden plant in the West. In the spring, English Bluebell produces a bunch of small bell-shaped flowers with the fragrance of blue and purple. In its native place, the pieces of English Bluebell weave a beautiful tapestry of blue and purple. 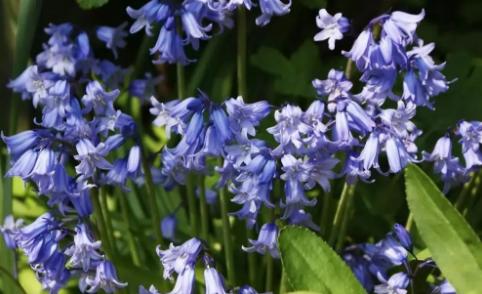 Racemes are terminal, pendulous to one end, bearing 5-12 florets (occasionally 3-32); Flowers are campanulate, 14-20 mm long, bracts 2; english bluebell has 6 tepals with curved tip, violet-blue or white, rarely pink, erect at first, pendulous to one side when open; The 3 stamens of the outer wheel are more than 75% of length united with the perianth, with yellowish anthers at the top; Flowers have strong sweet fragrance

English bluebell is blooming from April to May.

Seeds are black, germinate on the soil surface.

English bluebell (Hyacinthoides non-scripta) is fond of loose and slightly acidic soil, and is fond of shade but not resistant to sunlight. Therefore, lush deciduous forest is its main distribution area. Because its thick leaf layer is convenient for young bulbs to penetrate deeply, and the shade of trees in summer can block the sunlight. Therefore, English bluebell is also regarded as the symbol of the ancient forest, and is called the forest bluebell.

English Bluebell's roots are contractive and can be contracted to pull the bulb into a deeper, more moist soil layer up to a depth of 10-12cm. This may also explain why there is no English bluebell in the poor chalky soils of the south-east of England, because bulbous roots cannot penetrate deep into the soil.

The early opening of English Bluebell (Hyacinthoides non-scripta) is another reminder that the changes brought by climate change can be seen in the grass and trees around us. Remember, english bluebells are particularly susceptible to unstable flowering periods because they need to grow out with the leaves overhead for shade. If the English bluebell blooms early, it will inevitably die before pollen is distributed. 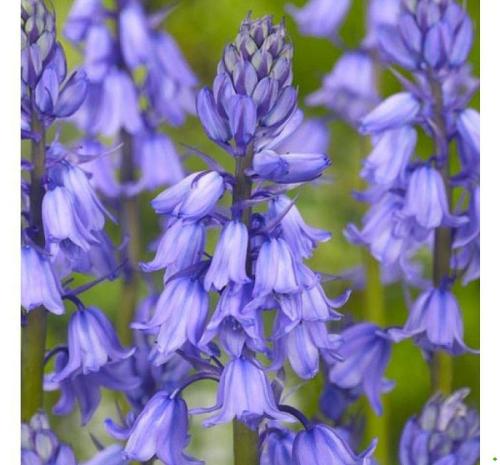 English bluebells (Hyacinthoides non-scripta) are found in the western part of Atlantic Europe, from northwest Spain (even northwest Portugal) to the Netherlands and the British Isles. It can be found in Belgium, England, France, Ireland, the Netherlands and Spain. Meanwhile, English bluebells have been released into the wild in Germany, Italy and Romania. It has also been introduced to the Pacific Northwest of North America (British Columbia, Washington, and Oregon) and the Northeast United States (Virginia, Kentucky, Indiana, Ohio, Pennsylvania, and New York).

The main value of English Bluebell

English bluebells (Hyacinthoides non-scripta) is a widely grown garden plant in the western world. It is used as a beautiful flower in the forest or grass belt. They bloom in the same period as hyacinths, daffodils, and some tulips.However, because they reproduce and spread quickly, they need to be controlled with the same care as weeds. It is known as Britain's most popular flower.

Medicinal value: English Bluebell contains many chemical ingredients with potential medicinal value, including at least 15 bioactive compounds. Some of the extracts - water-soluble alkaloids - are similar to compounds that have been shown to fight HIV and cancer. The bulb of Bluebell is used in folk medicine to treat leucorrhea and has diuretic and hemostatic effects. And its juice is used as a binder.

Sterilization: After we receive English Bluebell planting balls, the first thing we need to do is to conduct disinfection. The specific method is to soak carbendazim in a 1000 times solution for about 30 minutes. If mold appears in your English Bluebell pellets during storage, it is best to expose them to the sun and then soak them in carbendazim solution 1000 times.

Soil: choose a more appropriate size flowerpot, into the soil, the best choice of fertile soil, better air permeability micro-acid soil, flower spacing should be appropriate. For potted plants, plant three to five balls in a pot about 15 centimeters in diameter and cover the soil with twice the thickness of the balls.

When it is just planted, it is best to see dry and wet. At first, it can be watered thoroughly. In the later stage, it is necessary to control the amount of watering. In winter, when temperatures are low, water can be dispensed with.In terms of fertilizer, English bluebell leaves grow out before.

Fertilizer is not needed. Fertilizer can be applied about ten days before flowering, or it is not necessary. It should be noted that English bluebell likes shade, so it is best to keep it in a place with mottled sunlight. If not, it will grow normally in full sunlight. 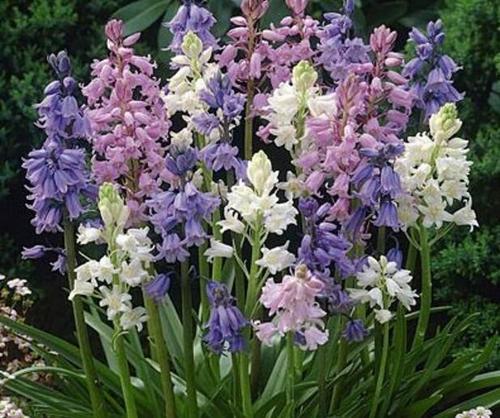