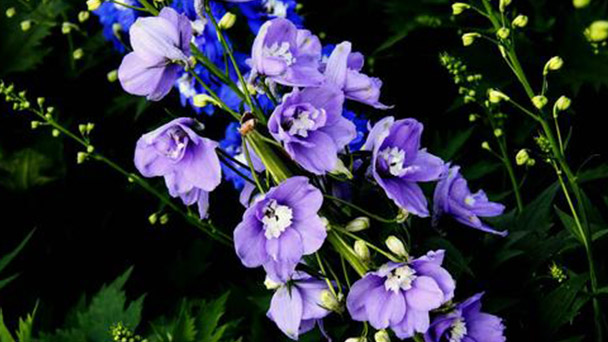 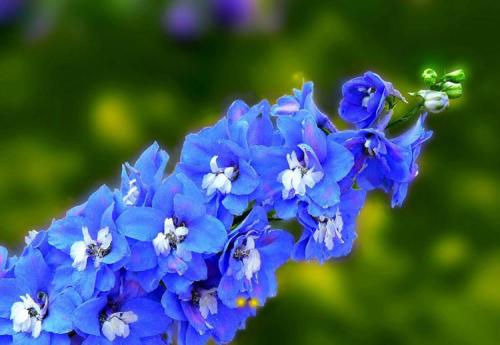 DoubrucKnight's-Spur is an annual herb, less than 1 m tall and slightly hairy. The branches are few and uplifted. Basal leaves are long petiolate, 3 deep lobes several to base, lobes divided into many linear fractions; Upper leaf is sessile, also with many linear lobes. DoubrucKnight 's-spur stem ca. is 60 cm tall, with inflorescences more or less curved pubescent, branched above middle.

DoubrucKnight's-spur even more in the filling of flowers when a flock of bluebirds fall from the sky, very appealing.

Due to the Doubtful Knight 's-spur fruit ripening inconsistency and natural opening after ripeness, the seed is easily lost, so it should be collected in time

DoubrucKnight's-spur is originally from China and Northwest Siberia. Altitude: 700 m. The domestication of horticulture began in the 17th century. With its tall and straight plants, delicate leaves, full inflorescences and dense flowers, DoubrucKnight's-spur has become a "pretty woman" in European gardens and has been widely used in gardens.

Currently, DoubrucKnight's-spur has been cultivated in all provinces of China, and there are even DoubrucKnight's-spur wild seeds in places such as Hebei. Under the trend of vigorously advocating the use of native flowers in landscaping and beautification, we believe that this kind of beautiful flowers will be more widely used. 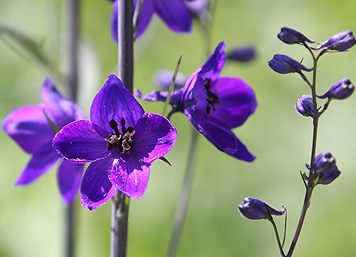 DoubrucKnight's-spur requires a sunny and cool growing environment that can withstand both cold and drought, but is not resistant to high temperatures and moisture and is not very soil demanding. However, the following problems should be paid attention to when planting:

(1) Sowing time: In spring and autumn, DoubrucKnight's-spur can be planted, if the planting in the autumn must be carried out in the middle of September.

(2) Maintenance: after sowing, the soil must be kept moist. The easiest way is to cover some grass, and gradually remove the mulch after emergence.

(3) Transplanting: When DoubrucKnight's-spur grows two true leaves, we transplant them in a small pot with soil, and change the pot again when the seedling is grown.

(4) Watering: Watering to see dry, see wet, in the flower period to be appropriate to water a little more, to avoid the soil too dry.

(5) Fertilization: in the basin when applied into dry manure as the base fertilizer, according to the growth situation, every month 1~3 times the stale cake fertilizer water.

(6) Control height: after changing the pot for DoubrucKnight's-spur, use the potpotazole to control the height of the plant, the specific practice is: every 2 weeks apply 0.5% potpotazole 1 time.

The suitable temperature for DoubrucKnight's-spur germination is L5 ℃, and the best temperature is below 20℃ for germination in about two weeks. Autumn sowing is from late August to early September. First, DoubrucKnight's-spur is sown into the open seedbed. Before winter, it goes into the cold bed or cold chamber for overwintering. In early spring, direct seeding was conducted on open ground in southern China, and the spacing of seedlings was 25~5 cm. In the north, seedlings of DoubrucKnight's-spur are generally raised in advance and colonized in April. Two to four true leaves are transplanted and four to seven true leaves are colonized. Pay attention to drainage on rainy days. Fruit ripening period is not consistent, when ripe when natural cracking, so should be harvested in time. Generally in June will have ripe seeds first harvested 1~2 times, in July to choose all the best harvest drying threshes. Cutting propagation of DoubrucKnight's-spur in the spring, when the new leaves grow more than 5 cm cut cuttings, inserted into the sand.

Spring and autumn can be carried out DoubrucKnight's-spur division propagation, generally 2~3 years a plant.

DoubrucKnight's-spur has a chic design and elegant colors. Or planting, planting flower beds, flower borders, can be used as cut flowers, tall flower varieties or good materials for cut flowers.

DoubrucKnight's-spur whole grass is poisonous and the seed oil can be used industrially. 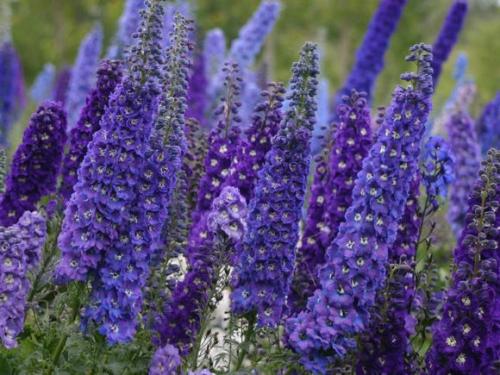