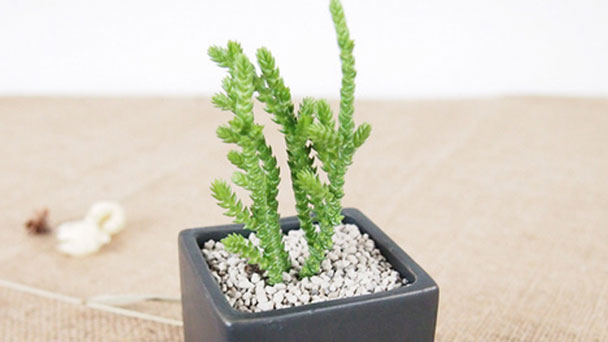 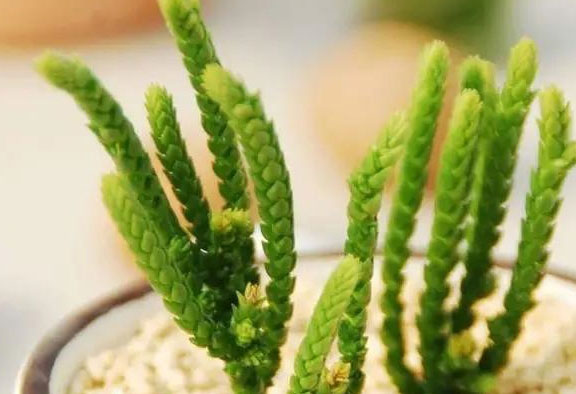 The name crassula muscosa comes from the Latin word muscosus, which means “mossy.” It is also known as Crassula lycopodioides.

Crassula muscosa is a fascinating string succulent that can reach a height of 12 inches (30 cm) and has a spreading habit of branching stems with tightly overlapping, stacked, narrow, light green leaves. The leaves completely conceal the stems, which begin upright but then trail over due to the weight of all the leaves. The small, pale yellowish-green, musty-smelling flowers appear alongside the tightly packed leaves along the stems from spring to mid-summer. It’s ideal for adding a splash of color to a mixed planting or as a small-scale ground cover in a well-drained mound or rock garden.
Watch Chain is the most common name for this Crassula muscosa plant because of its delicate interlocking leaves that resemble the tight jewelers’ links used to attach a pocket watch to a vest.
The watch chain succulent grows in a variety of habitats. It is found throughout South Africa, from the Western Cape’s winter rainfall area to the Eastern Cape and north into Namibia and Lesotho, though it is often found only in well-drained rocky quartz fields. It is hardy to around 20 degrees Fahrenheit (6.7 degrees Celsius), but it appears to dislike being cold and wet at the same time. 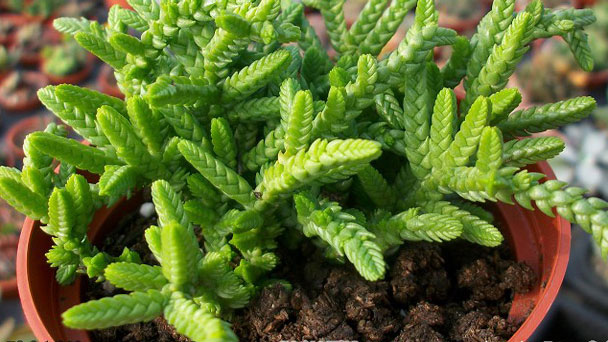 How to Grow & Care for Crassula Muscosa

How to Grow Crassula Muscosa 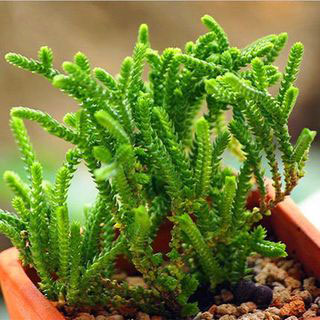 How to Care for Crassula Muscosa

The rattail crassula does best in full or partial sun. Hot summer sun is welcome. An only bright location but directly behind a window is also suitable. This little Crassula muscosa plant can spend the summer in the garden or on the balcony. Soil and container is the essential material to grow your crassula Muscosa. Chose a container with average size which has a drainage hole form which water could drain out. Allow the soil to nearly dry between the waterings. Drying out for short time will be tolerated but it is better if the soil only dries to about 90 % of the pots height. Water sparingly if placed cool to temperate during winter. In Spring and Summer a good temperature is around 70-75 Fahrenheit, they can take higher temperatures than this as long as long as plenty of ventilation can be given, open windows if growing on windowsills indoors on very hot summer days or install a circulating fan in hot greenhouses. In Winter Crassula muscosa can take very cold temperatures and is hardy to 20 Fahrenheit but ideally a temperature around 41 Fahrenheit is a safer minimum temperature for these plants in Winter.
Like all succulent plants, Crassula muscosa don't like high humidity as this can encourage fungus and rots, plenty of ventilation must always be given in very hot and wet weather, the ideal humidity for these Crassula muscosa plants is 50% or lower, but they can take much higher than this if the soil is allowed to dry out in between watering, and the soil is kept much drier in Winter. Typically Crassula Muscosa doesn’t require fertilizer in all seasons but if you want to accelerate the growth of your Crassula muscosa  you can use fertilizer in summers. Crassula muscosa is best pruned every year in Spring to help prevent the stems from growing unruly and pruning this Crassula muscosa plant back also helps to prevent the stems from dropping off from the weight of the stems as they grow. These plants can be easily re started again as cuttings if the stems start to look too dry and brown. 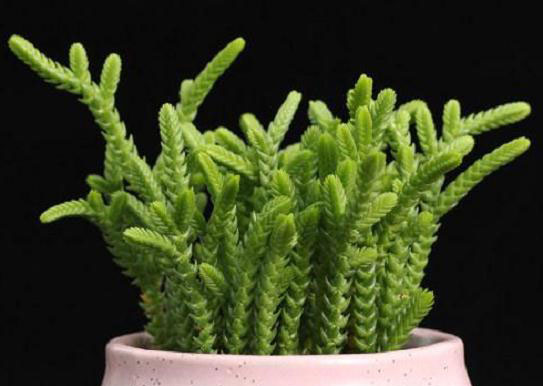 As a result of the nature of the Crassula muscosa plant, it isn't hard to grow and preserve within in, say,  a balcony, or even inside. It’s a great way to get little ones involved with plants and gardening. In the event that you have plants around your home, watch chain plant can readily be trimmed to squeeze into pretty much any space with no growth getting interrupted.

There are so many species and cultivars of Crassula to choose from that you may become a collector. In addition to the standard jade plant cultivars (Crassula ovata), here are a few others that may catch your eye:
Crassula 'Morgan's beauty': This hybrid cultivar has silver leaves dusted in white, with pretty pink late spring flowers. It grows about 4 inches tall.
Crassula erosula 'Campfire': This variety has long-branching lime leaves that turn blazing red in winter. It's a clumping plant that grows about 4 to 8 inches tall and spreads up to 2 feet wide.
Crassula pellucida variegata : This plant exhibits a flowing mass of heart-shaped leaves variegated in pink, green, and creamy yellow.
Crassula perforata: Also known as the stacked Crassula, this plant has leaves that circle around a central stem, giving it the common name string of buttons. 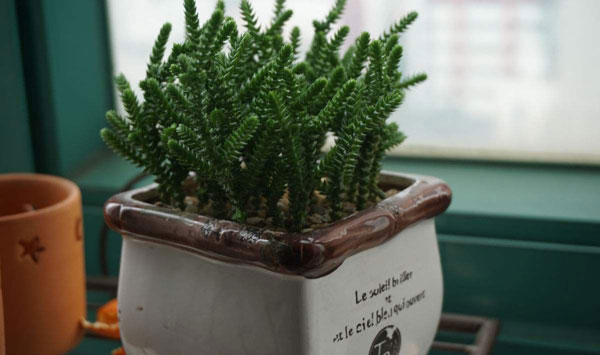 Crassula Muscosa is defensive less to mealy bugs and other large scale insects. Overwatering, poor quality and very low temperature is also the cause of root rot. Poor quality soil means the soil with more moisture and less able to drain out the water during the watering process. If accidentally your crassula lycopodioides (zipper plant) is affected, then treat it with neem oil insecticide or any other powder form insecticide. Once your plant is affected your first task is to move affected plant to another area and remove the affected steam with a knife. After removing the affected area keep apply the neem oil for a few days until your Crassula muscosa plant will groom.

How to Grow & Care for Crassula Muscosa (Watch Chain Plant)

How Much Light Does String of Pearls Require

Is Your String of Pearls Toxic to Cats

How Do You Propagate String of Pearls From Cuttings