As a trailing succulent, String of Hearst plant is perfect for planting in hanging baskets or in pots on shelves or window sills, which doesn’t grow very tall but can trail well over 10 feet. That’s why it gets the common name rosary vine or chain of hearts. (Find more best indoor hanging plants here.)
The heart-shaped, fleshy, gray-green foliage has an eye-catching marbled pattern and the thin, string-like vines have a distinctive purple shade. string of hearts plant is non toxic and safe for for cats, dogs other pets and humans.
It is a long-lived and fast-growing and easy-care house plant. Although most commonly grown as a houseplant, the string of hearts plant is sometimes grown as a sprawling ground cover, in rock gardens, or for cascading down walls in warm climates. 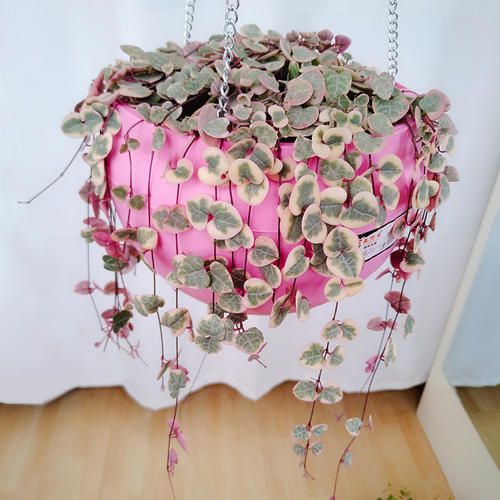 The String of Hearts Plant (Ceropegia woodii) plant prefers to have some bright sun throughout the day, but it will do fine in bright, indirect light, as well. When grown in direct sunlight, the plant’s leaves will be dark green with variegated silver markings. In indirect light, the leaves will be a lighter green with softer variegated markings.
Your String of Hearts can do just fine in a low light situation, if needed, but the leaves will be a pale green with no variegation. The loss of variegation is probably permanent and the variegation will not return even if the plant is moved to better light.
Important Note: In summer, heat stress is easy to burn the leaf surface, resulting in wrinkle of string of hearts leaves.

String of Hearts plants thrive in well-drained cacti potting mixes. Although they appreciate decent fertility, if the mix is overly rich, the plants can become straggly-looking. If you are using an ordinary potting mix, it will need additions of things like pumice or perlite to ensure it has sufficient drainage during the string of hearts care. (Also Read: How to Repot a String Of Hearts)

Chain of Hearts water need is just like other succulents, so make sure you give them a good soak after the soil is completely dried out from the last watering. Although the string of hearts is drought-tolerant, it does like more frequent watering than many other succulent species. It's vital that your string of hearts plant isn't left in standing water, which can result in swollen foliage, leaf drop, and the growth-habit can become messy. In the winter, the plants need even less water than summer.

String of Hearts Plant (Ceropegia woodii) does not require a lot of humidity to thrive. It enjoys 40-50% humidity and thrives between 18 and 24 Celcius, so is well-suited to most UK homes. No extra measures to ensure higher air humidity are necessary. If you have high humidity in the room the plant is in; you might need to water it less frequently.

String of Hearts Plant only need infrequent fertilizers and half-diluted fertilizers. They can be fed at most once a month during their active growth period in May – August. They don't need any fertilizer during winter, their dormant period.

String of Hearts Plant is a wispy plant, and grown as a houseplant, vines typically only reach around two feet long. In its natural habitat, string of hearts plants can grow as much as twelve feet long.
You do not need to prune your String of Hearts plant. However, if the vines are too long, looking too leggy, or you want to propagate some cuttings, then you can freely prune your plant. Otherwise, it’s probably just fine without pruning unless there are parts of the plant that are dying or rotting.
Pruning String of hearts plant is easy. Simply snip off the vine with a pair of scissors or shears where you would like it to end. This plant is hardy enough to withstand a pretty harsh pruning, so don’t worry too much about being precise. You can use the clippings to start new plants either by putting the clippings in water or planting them directly in good soil.

This is a sturdy plant that doesn't have a lot of problems. It is not prone to pests nor diseases. This makes it a great beginner plant. As far as plant pests go, mealybugs can be an issue. 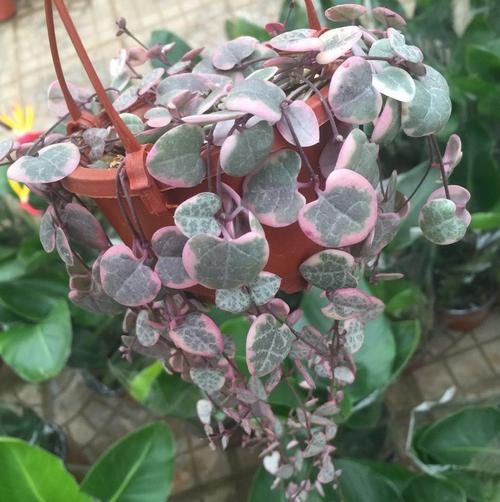 How to Grow String of Hearts Plant

Growing string of hearts (Ceropegia woodii) in water is popular as it is quite easy to carry out. All you need to do is to prepare a vase, scissors, and some water. Then cut off the String of Hearts Plant you want to root, put them in the vase, and wait for root to grow. Remember to place the vase in a warm area with enough light so that the root can grow more quickly.
The time needed for roots to grow depends on light and temperature, with the right conditions, roots will appear after a couple of days.
Read More: 20+ Plants That Grow in Water

To carry out this method, you need to cut off the String of Hearts Plant vines, then remove the leaves on the side that you will plant and stick the vines into the soil. In this step, you have to ensure that the nodes are covered in the soil so that the root can grow. Make sure the vines are placed in a light and aerated area with the soil slightly moist (water once a week) for the roots to grow out.

For growing String of hearts plant in tuber, you need to find the biggest tuber possible. A fingernail-sized model may be a good choice. You can leave the tuber on the vine and press it into the soil to grow root. Once it grows root you can cut the vine from the String of Hearts Plant parent plant. Another way is to remove the vine with the tuber from the mother plant. Place it in a pot with soil and slightly cover the tube in the soil mix. Keep it in a bright area and water weekly, a few weeks later, the tuber will be rooting. 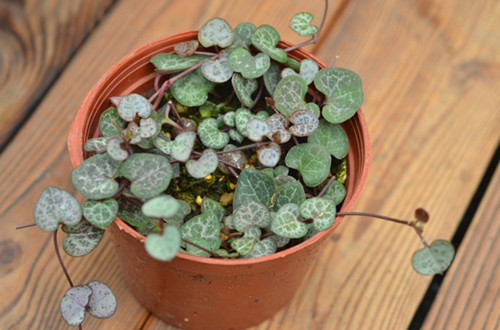 In general, String of Hearts propagation from leaf cutting can be carried out at any time, but not in winter when the temperature is low. Cutting propagation of string of hearts will have a certain impact on the recovery of the plant. The best to propagate string of hearts plant is late spring and early autumn. At this time the plant activity is high, cutting survival rate is high.
When we propagate String of Hearts cuttings, first choose a pair of leaves with a little stem node and cut them as cuttings, then put them in the shade and dry for a week, and then directly insert them into the soil, water and cover them with plastic film. After that, water appropriately to maintain certain moisture in the soil, and spray frequently to moisturize. The new shoots will appear in about three weeks in appropriate care. Then remove the film and let the new String of Hearts Plant grow naturally. Transplant the new String of Hearts plant into a pot when the root grows to 2-3cm after 2 or 3 weeks later. (Read more about String of Heart Propagation.)

There are many different varieties of ceropegia, including String of Hearts and String of Turtles. Other related plants include necklace flower, wine-glass vine, and bushman’s pipevine. Surprisingly, these widely varying plants are related to the milkweed species.
However, there are very few actual cultivars of String of Hearts. Variations within ceropegia woodii are often due to the presence of bright or poor light, causing a variance in the color and variegations in the leaves. 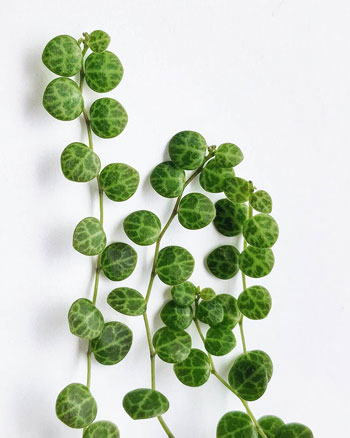 How to Deal with Underwatering String of Hearts?

String of Hearts plants store water in their leaves, so a good indicator to watch for is the leaves beginning to soften and look a little wilted and deflated.

How to Deal with Overwatered String of Hearts?

Overwatering tends to result in yellowing of the leaves and eventually leaf loss of String of Hearts plants. If you suspect you have overwatered your plant, aerate, hold off on watering until the soil has fully dried — potentially up to a month — then refer to the care guide to get back on to a proper watering routine. (Read more about Saving Overwatered String of Hearts and Saving String of Hearts Yellow Leaves.)

How to Make String of Hearts Flower Bloom?

The String of Hearts has tiny deep Magenta-colored flowers that they can bloom indoors yearly. The string of hearts flower blooms small tubular white to a pale purplish-red String of Hearts flower with a bulbous base and five fused petals at the top. Providing proper care for your plant and adding fertilizer spring through fall can help kick it into bloom in summer and fall. Just be sure not to apply too heavy fertilizer as this can burn the plant. Follow the package instruction for a liquid houseplant fertilizer.

How to propagate string of hearts

How to grow and care for string of hearts

How Much Light Does String of Pearls Require

How to Save Overwatered String of Hearts

Why My String of Hearts Have Yellow Leaves

Why My String of Hearts Have Wrinkled Leaves

How to Propagate String of Hearts (6 Ways)

Is String Of Hearts Toxic To Cats -Should You Untangle Them?