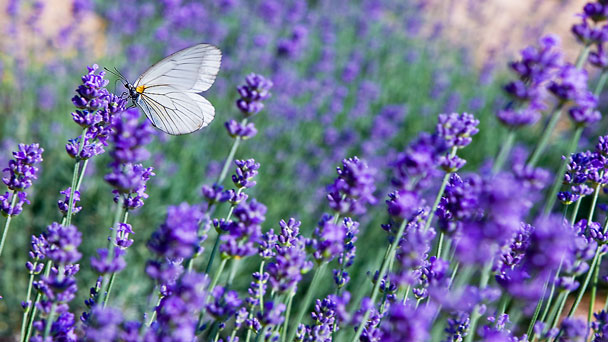 Where to Grow Lavender

For indoor growing, Lavender should receive as much light as possible. It will do best in a south-facing window or where it can get a minimum of three to four hours of direct sunlight. Rotate the pot weekly for uniform growth and flowering. Without enough light, the lavender plant will produce weak, spindly growth, will cease to produce flowers, and it will be more susceptible to disease. Indoors, good ventilation and air circulation are important, but do not place the plant where it will be exposed to the direct flow of forced-air heat. Ideal indoor temperatures from spring through mid-fall are 50 to 55 degrees F at night and 70 degrees F during the day. During the late fall through winter, temperatures should be cooler. 45 to 50 degrees F at night and 60 to 65 degrees F during the day. The lavender plant will benefit from being moved into a semi-shaded area outdoors after all danger of frost is past. In the spring, it may be planted outside in a sunny area. When mature, the plant can take temperatures down to 10 degrees F.
Clay or terra cotta pots are the best options as they allow for good airflow and movement through the root zone, allowing the growing media to dry out quickly. Plastic pots will hold too much water. 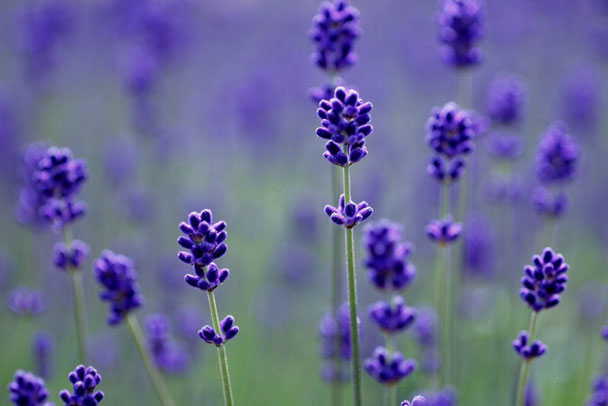 When to Grow Lavender (Lavandula)

Lavender is best planted as a young plant in the spring, after the soil has warmed up to at least 60°F (15°C) and the threat of frost has passed.
If planting in the fall, choose larger, more established plants to ensure their survival through the winter. 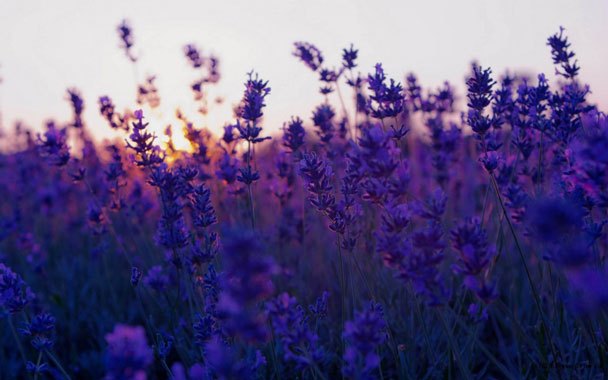 How to Grow Lavender (Lavandula)

If you want to take your one lavender plant and expand your indoor garden to two, three, or more it’s easiest and cheapest to do it by propagating new plants yourself. Starting new plants from cuttings is the best option since it gives you an exact clone of your existing plant. It is also quicker than starting from seed.
To start new plants from stem cuttings: Cuttings should root in approximately three to four weeks; hardwood cuttings may take slightly longer.

If you don't already have a lavender plant, you can feel good about planting lavender seeds, which is a great way to grow a whole lot of lavender inexpensively. Not long ago, seeds from the same packet would often yield plants of variable height and strength, but now, you can expect a consistent number of plants that look very similar. You can find lavender seeds through a reputable online retailer like Burpee.
In a warm location (about 70 degrees), start your seeds in a seed tray with a very light soil mix or fine vermiculite that drains quickly. The seeds will sprout in about two weeks, at which point you should place seedlings in full sunlight. Water your seedlings, but don’t let them stay damp as this can lead to mildew growth. When your lavender plants have leaves, you can plant them in their final pots.

How to Care for Lavender (Lavandula)

Lavender plants thrive in full sunlight, which is the best way to guarantee a lot of buds and big, full bushes. They really can't handle much (if any) shade, so don't plant them in a bed or spot in your landscape where they'll be overshadowed by trees or other large plants.

As with many plants grown for their essential oils, a lean soil will encourage a higher concentration of oils, so go easy on the organic matter and fertilizer. Lavender prefers well-drained soil that is on the drier side, so if you're using a traditional potting mix, be sure to add in some sand for drainage. An alkaline or especially chalky soil will enhance your lavender's fragrance. Any pH below about 6.5 will likely cause lavender plants to be very short-lived—this is not a good choice for acidic soils.

Drench thoroughly when watering and allow the soil to become slightly dry between waterings. Check soil moisture by feeling soil with your finger. Over- watering and allowing the soil to stay constantly moist may cause rot. However, do not allow the soil to go completely dry, or the lavender will react with yellowing lower leaves. If the lavender is moved outside in the spring, be mindful that it will dry out more quickly and will need watering more often.

Lavender can withstand a range of temperatures—it is usually dampness more than cold that is responsible for killing lavender plants. Dampness can come in the form of wet roots during the winter months or high humidity in the summer. If humidity is a problem, make sure you have plenty of space between your plants for airflow, and always plant your bushes in a sunny location. Protect your lavender plants from harsh winter winds by planting them next to a stone or brick wall, which will provide additional heat and protection.

Fertilize with all-purpose, water-soluble fertilizer at half strength every four weeks during spring and summer.

every year immediately after bloom. For low-growing lavenders, trim back foliage 1 to 2 inches. Starting in a plant's second year, all 2- to 4-foot lavenders should be cut back by about a third to keep the plant from getting overly woody. If a plant becomes woody and open in the center, remove a few of the oldest branches; take out more when new growth starts. If this doesn't work, it's time to dig out the plant and replace it. (Some commercial growers replace plants after 10 to 12 years.)
If you won't be harvesting the blooms of repeat performers, such as Spanish lavender, cut off faded lavender flowers to keep new ones coming. Snip stems when the bottom third of their blossoms are open; not all blooms are ready to cut at the same time. Remove leaves from the stems, gather stems in bunches, and secure each bundle with a rubber band. Use no more than 100 stems per bundle.

Lavender plants are generally considered hardier than many other perennials, but they still fall prey to a few insect and disease problems. Monitor your plants frequently to catch problems early and treat them before damage is extensive.
Pests
Aphids are one of the most common insects affecting indoor plants.  Symptoms appear as distorted foliage and leaf drop. Remove aphids by wiping the plants with a clean, soft cloth or spraying the plants with a mild solution of water containing a few drops of dish soap.
Whiteflies are closely related to aphids and are often mistaken for tiny white moths. Symptoms include stunting and yellowing of leaves, followed by leaf drop. They quickly take to flight when the host plant is disturbed, making them hard to treat. Hand removal is best or spray plants with a strong stream of water.
Diseases
The common diseases seen in lavender are root rot, alfalfa mosaic virus, and shab.
The most commonly seen problem with lavender is root rot, caused by overwatering, especially in the winter months. The roots then die back due to lack of oxygen or the overgrowth of a soil fungus.Soggy soils encourage the growth and multiplication of Pythium, Phytophthora, Rhizoctonia, or Fusarium fungi which spreads into the roots, infecting plants. If caught soon enough you can repot the plant, to try to save it. Remove as much of the infected soil as possible adding in fresh, clean potting soil. If root rot has spread significantly, dissect the plant, keeping only the healthy portions. If the whole base is affected, take stem cuttings from healthy foliage to propagate a new plant.
Found worldwide infecting many nightshade and legume plants, alfalfa mosaic virus can also be found in almost every commercial lavender producing operation. Infection results in yield losses, a reduced ability of the plant to overwinter, and increases susceptibility to other diseases. Symptoms show as distorted yellow leaves or blotches that appear in a mosaic pattern. The virus is typically spread by aphids, so watching for aphid infestation is important. Once plants show signs of infection there is little that can be done for treatment.
Out of nowhere, Shab takes over and kills the stems of lavender plants. This fungus wreaks havoc on lavender plants even when there is no drought or any other stressors. Very small black specks appear on the stems of the plant, followed shortly by wilting as the fungus saps the plant of its strength. Unfortunately, once shab sets in there is little that can be done for treatment. Cut away infected parts of your lavender plant or destroy the entire plant.
Read Next: How to Grow Lavender Plant Indoors

English lavender (Lavandula angustifolia) is most common and hardy to Zone 5. There are hundreds of varieties available in many colors and sizes. It often blooms twice in one season.
‘Hidcote’: Compact, silver-gray foliage, deep purple flowers.
‘Munstead’: Compact, green foliage, violet-blue flowers.
Lavandins (L. x intermedia)—a hybrid of English and Portuguese lavender (L. latifolia)—are generally larger plants that bloom only once per year, later in the summer.
‘Phenomenal’: Vigorous variety that is highly tolerant of heat and humidity and resistant to common root and foliar diseases. Long Flower spikes.
‘Provence’: Vigorous, long-stemmed variety, very fragrant.
Spanish lavender (L. stoechas) and French or fringed lavender (L. dentata) are typically only winter-hardy in Zones 7 to 9.

My ‘Provençal’ lavender plants are a few years old and very leggy,which is not so good since they line a walkway. How can I get them back into shape?

All lavenders should be pruned once a year to keep them low and full. Since you haven't pruned for a year or so, renovation will require several steps. Start this spring, when the plants begin to regrow. First, brush the branches with your fingers to knock off any dead foliage. Then, shorten half the old, gray stems — roughly every other one — to within a few inches of the base. If you see green buds sprouting near the base of an unpruned stem, cut to a quarter-inch above a bud. This thinning will admit more light, awakening buds that are low on remaining old stems. When green buds form near the base of these stems, cut the old wood back to the lowest emerging bud. By early summer, you will have shortened all the old stems to a few inches above the base. In midsummer, use hedge clippers or hand pruners to shape the plant into a symmetrical mound, like a shallow bowl turned upside down. Next year, you will have bushy lavender, which will need to be pruned only once. In zone 7, where you live, and northward, you can perform that annual haircut in early spring or in midsummer, right after heavy flowering. In milder climates, pruning should follow summer bloom.

This plant should not be eaten. While most plants are harmless, some contain toxins.

Can my indoor lavender plants be moved outside?

Yes, your lavender plant can be moved outside and may benefit from it. Due to its high light requirements, lavender plants do well when allowed to live outside during the hot summer months when the days are long. They are not cold-tolerant though so make sure to bring them back in before temperatures drop too low in the fall.