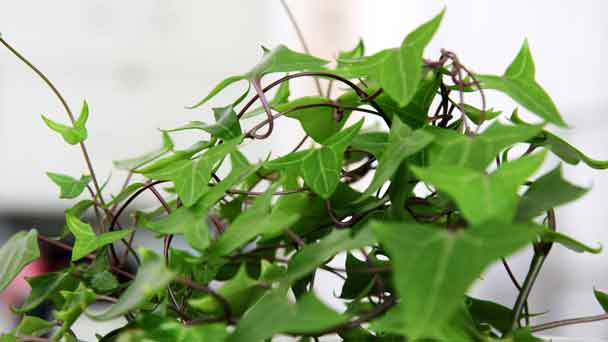 Where to Plant Algerian Ivy

The best spot for an indoor-grown Algerian Ivy is one that gets bright, indirect light, such as 1 or 2 feet from a west- or south-facing window. The plant can also grow in low- to medium-light conditions, or under artificial lights, but its growth may slow and its leaves may become more uniformly green. The Algerian Ivy plant grows in any commercial potting mix, provided its container has a drainage hole. A variegated ivy tolerates most indoor temperatures, but room temperatures of 50 to 70 degrees Fahrenheit during the day and 5 to 10 Fahrenheit lower at night is best. 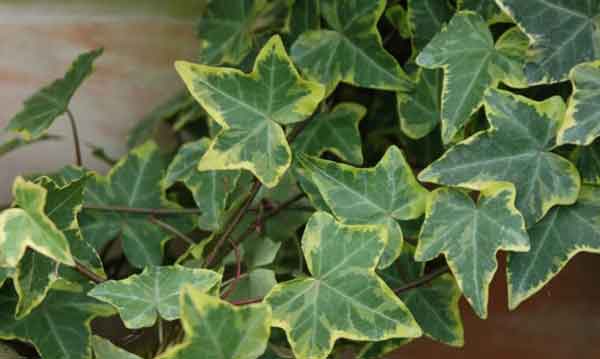 While the easiest method of Algerian Ivy propagation is to use cuttings, Algerian ivy, like most varieties of ivy, can be grown from seed. Keep the seeds in the refrigerator for 30 to 60 days. This process, called cold stratification, prepares the seeds for germination. Then soak the seeds overnight in a bowl of room-temperature water; this will accelerate the germination process. You can then plant the seeds in a tray filled with potting mix; press them lightly into the surface. Keep moist with a sprayer but don't soak them. They should germinate within a few days.

Use a clean seed-starting tray or 4-inch containers to root your algerian ivy cuttings. Fill each container with a soilless potting mix, perlite or coarse sand, and moisten with water.
Using a clean pruning tool to snip 6-inch sections of new growth from the ivy plant, being sure to include at least three to four nodes, where the roots will develop. Trim off the leaves from the bottom half of the cuttings.
Use a pencil to make indentations in the moistened potting mix and place an Algerian Ivy cutting in each hole, planting it deeply enough to cover about three nodes. Gently firm the soil around the cuttings and water again. Place a plastic bag over the containers to create humidity while the cuttings develop roots and situate the cuttings in a warm location out of the sun.
Water the soil when it begins to dry. If thick condensation starts developing on the plastic, lift it up and allow air to circulate for a bit before replacing it. The cuttings should root in about three weeks and be ready for repotting in approximately six weeks.
When the Algerian Ivy cuttings have established root systems and you’ve repotted them in new containers, gradually acclimate them to brighter light conditions, depending on the variety and their preferences. After approximately two to three months, you can transplant your ivy plants into the garden, and they'll develop into bushy plants in about six months. In no time, your ivy cuttings will be mature plants filling in empty areas of the Garden or containers with their vigorous growth. 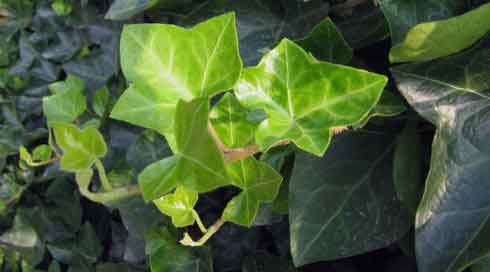 How to Care for Algerian Ivy (Hedera Canariensis)

Algerian Ivies are remarkably tolerant to a wide range of light conditions. But in the home a south or west window can be quite drying especially in summer. A north or east window or filtered or reduced light from a south or west window is satisfactory. Ivies respond well to artificial fluorescent light conditions. Place your plants 6" to 10" from the fluorescent tubes. In temperate climates ivies may be summered outdoors in the shade. In warmer parts of the country potted ivies will do well outdoors as well as indoors. Never put indoor algerian ivy plants outdoors where they will receive any direct sun.

Algerian ivy can be grown in almost any soil with decent drainage, but it does best in moderately moist soil.

Water Algerian Ivy thoroughly but infrequently. When the soil feels dry, gently add water to the soil until the surface is totally wet and the water drains out of the bottom of the pot. Then do not water again until the soil is almost dry. Do not allow pots to stand continually in water. If the air is dry, raise the humidity surrounding the Algerian Ivy plants by grouping ivies together on a tray full of wet pebbles or perlite, but do not allow the ivies to stand in water.

Cooler temperatures ranging from 10-21degree Celsius is preferable for Algerian Ivy. However, make sure that the temperature remains consistent. Temperature shock can cause the plant to go into dormant phase unexpectedly.
The plants prefer medium to high levels of humidity to thrive. Don’t keep the Algerian Ivy plants anywhere near heat vents because the heat can dry up the soil. Moist air and soil is quite necessary for the plant. You can create a mini greenhouse in your home near ivy plants if you find that humidity levels go further down to 50%.  Keep the pot on wet pebbles tray and arrange other houseplants nearby.  Place a mini humidifier to raise the humidity. You can also try misting the leaves with water alternatively. Misting also helps the plant to keep pests like spider mites at bay.

Feed Algerian Ivy every two weeks in the spring and summer with a balanced plant food diluted to 1/2 the recommended strength. Fertilize monthly in the fall and winter. Never feed an English Ivy if the temperature is extremely hot or cold, if the soil is very dry, or if the ivy plant is not producing new leaves.

Since we're talking about a vine that grows faster than anything you probably have planted in your garden so far, that brings up the topic of pruning. If your Algerian ivy flowers, then you have to remove those flowers when they wilt or fade. You need to do that to save the plant's energy in making seeds that you don't need anyway.
Feel free to prune the leaves and branches as much as you like and whenever you feel the need to do that. The Algerian ivy is an ornamental plant and as such, you need to run your pruning shears through it liberally. As with fertilizer, avoid pruning in the fall since that results in new growths that won't survive the winter. Many horticulturalists recommend you keep the ivy intact throughout the winter and prune it in the spring to prepare it for the new growing cycle.

Algerian ivy is surely an equal opportunist when it comes to the pests and diseases it attracts, and it attracts them all: aphids, loopers, mealybugs, scale, mites, canker, leaf spots, powdery mildew, and stem rot. That's a whole lot of trouble, but don't let it worry you too much as these are easy problems to get rid of.
Pest control is quickly remedied with insecticidal soap or neem oil. Leaf spots are bacterial and can be treated by trimming away diseased foliage and spraying what's left with copper soap. Powdery mildew and stem rot come from fungi and can be remedied with antifungal treatments such as sulfur spray. If this doesn't work, you may need to repot Algerian Ivy in pots, with sterile soil, and be sure you don't overwater. 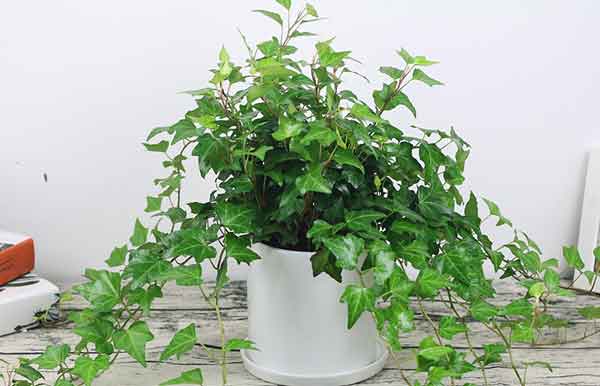 Algerian Ivy ‘Canary Cream’: This variety has green leaves with creamy white margins.
Algerian Ivy ‘Gloire de Marengo’ aka 'Variegata': This has large leaves, up to 6-inches long, and great color contrast with deep green leaves edged in white and silvery green patches occurring inside the margins. It is slightly frost-sensitive. 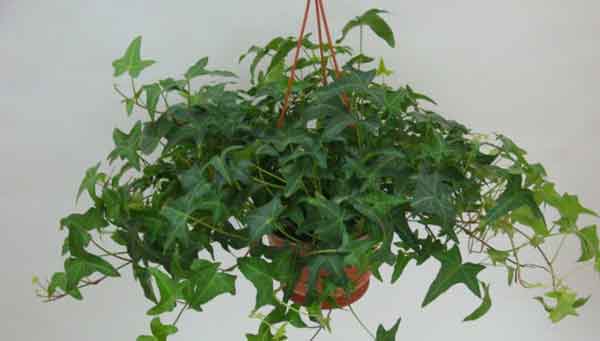 The Algerian Ivy's rapid growth makes it invasive without proper care. Regular pruning to keep the vine within bounds will be necessary. If left unattended, the Algerian Ivy plant will take over a yard or garden, and may even damage nearby buildings if allowed to grow up their sides.

Many ivy species are toxic and unfortunately, the Algerian ivy is one of those toxic ones. Be careful when handling the leaves as when you prune or plant it. You should always wear garden gloves and avoid touching it with your bare hands as this could lead to irritation. The same thing applies to ingesting the leaves or the flowers. They can cause stomach aches and trouble with the digestive system.
If you have pets, then try to keep them away from the vines of this ivy. Although dogs and cats don't find the leaves particularly munchy, rubbing against the leaves could make their skin itchy. Worse still, their fur would transport particles of the vine into the house where they would cause skin irritation to anybody they come in contact with.